easerthegeezer said:
the big rock makes me nervous though. Im sure its stable but....

have tested it lots! there's a few rocks lodging it in place you can't really see. If amano can do it... 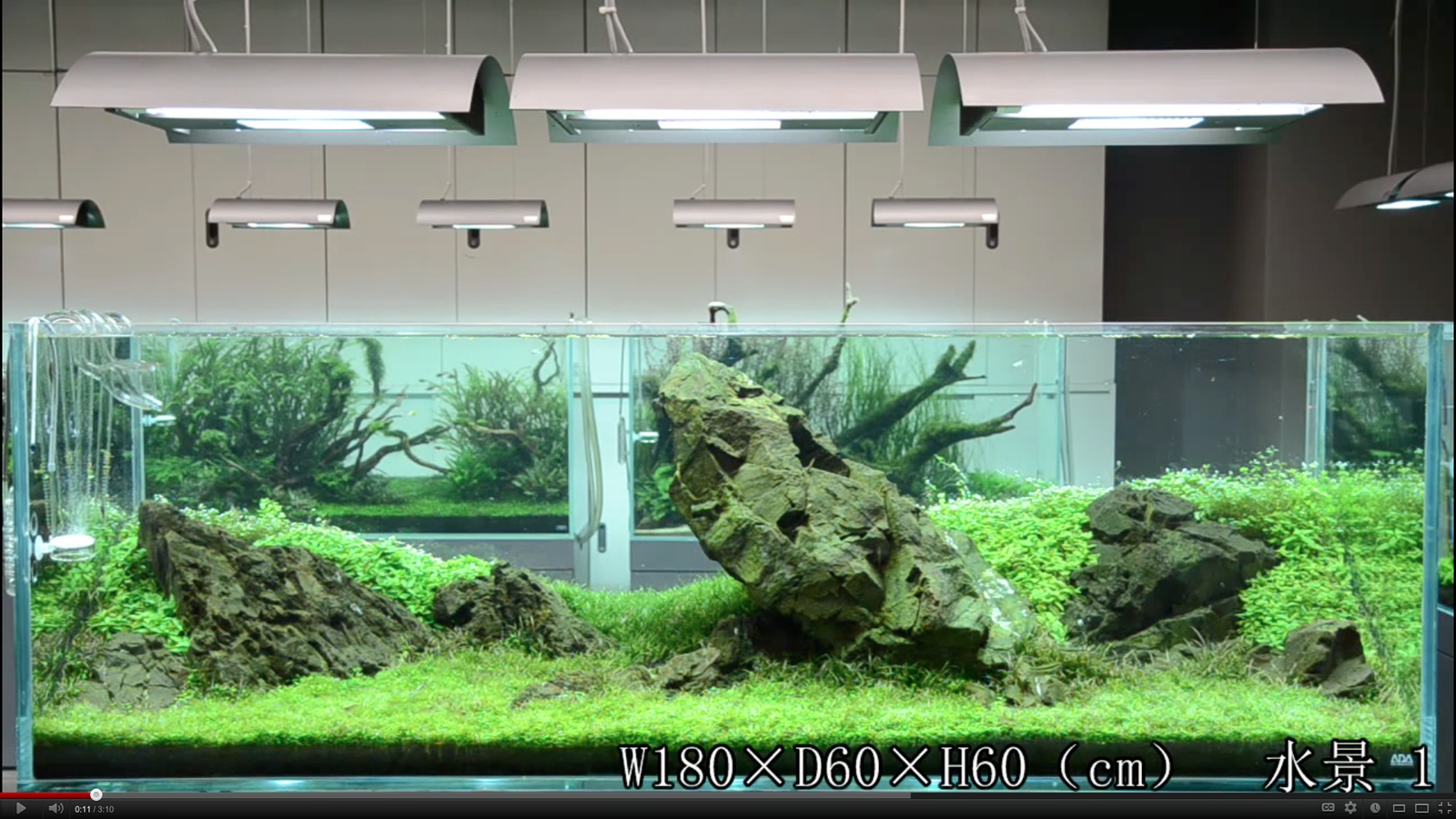 looking at the photo, is really interesting how much flatter my tank looks than in real life. really should angle the rocks (like the big one on the far right of my tank, which is actually at quite an extreme pitch) much less subtly.

or just scape through live-view on a camera.!

Because am bored with slow growth, I've upped the lighting and CO2 times:

Day off so popped to living waters in Croydon, which I've never been to before. Really nice shop, quite a few planted tanks (including some algae tanks, which were surprisingly nice.) Great prices too, so picked up some HC pots that had lots of growth and long roots, some rotala roundifolia and blyxa japonica (75p each!) to replace the crypts which just look totally wrong now. 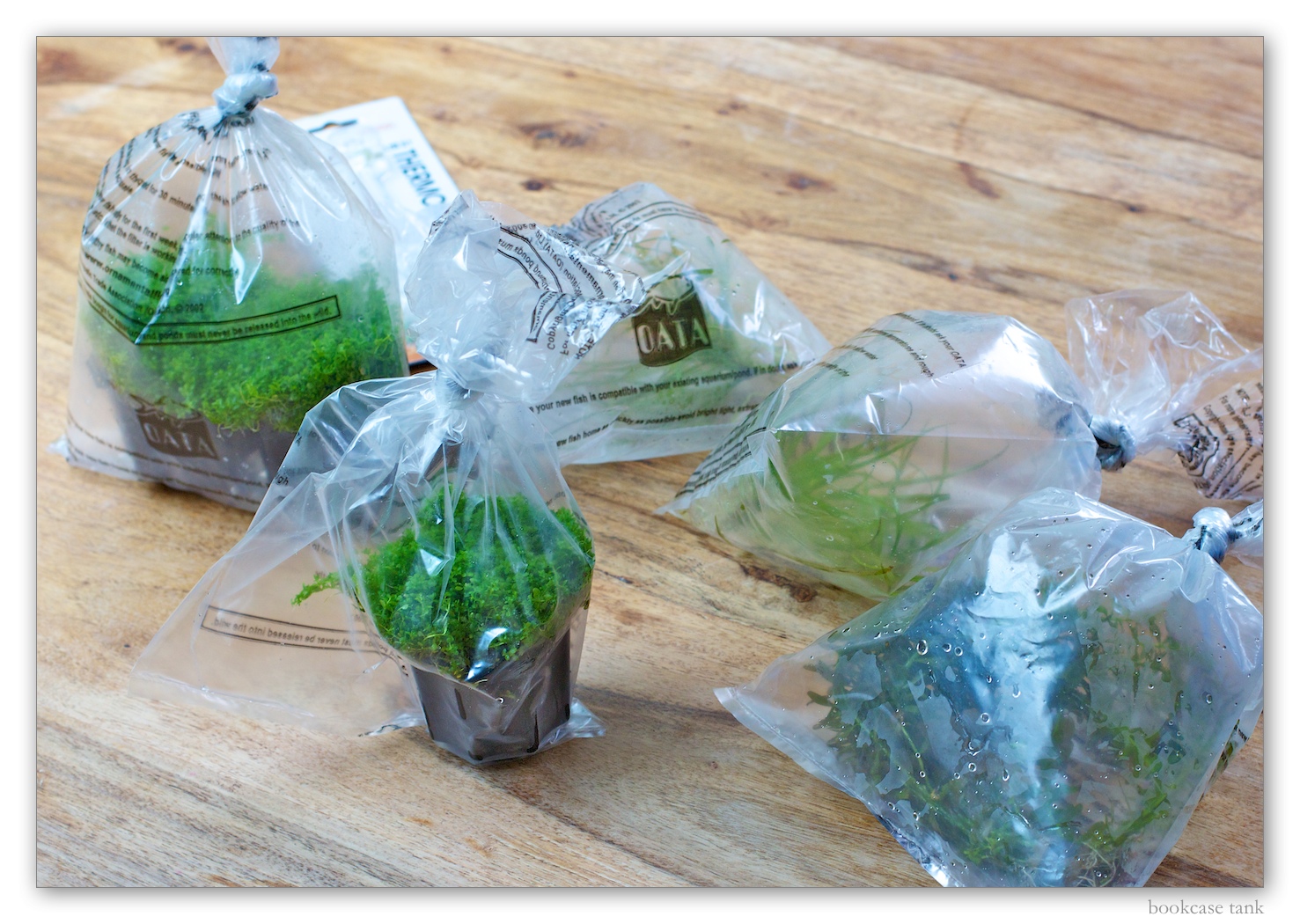 Good chat with the owner. He said this rotala problem, which I've still got a bit is either an infection or a boron deficiency. So am going to up the traces a lot. Here are some better photos of the problem - basically, old leaves have black discolouration: 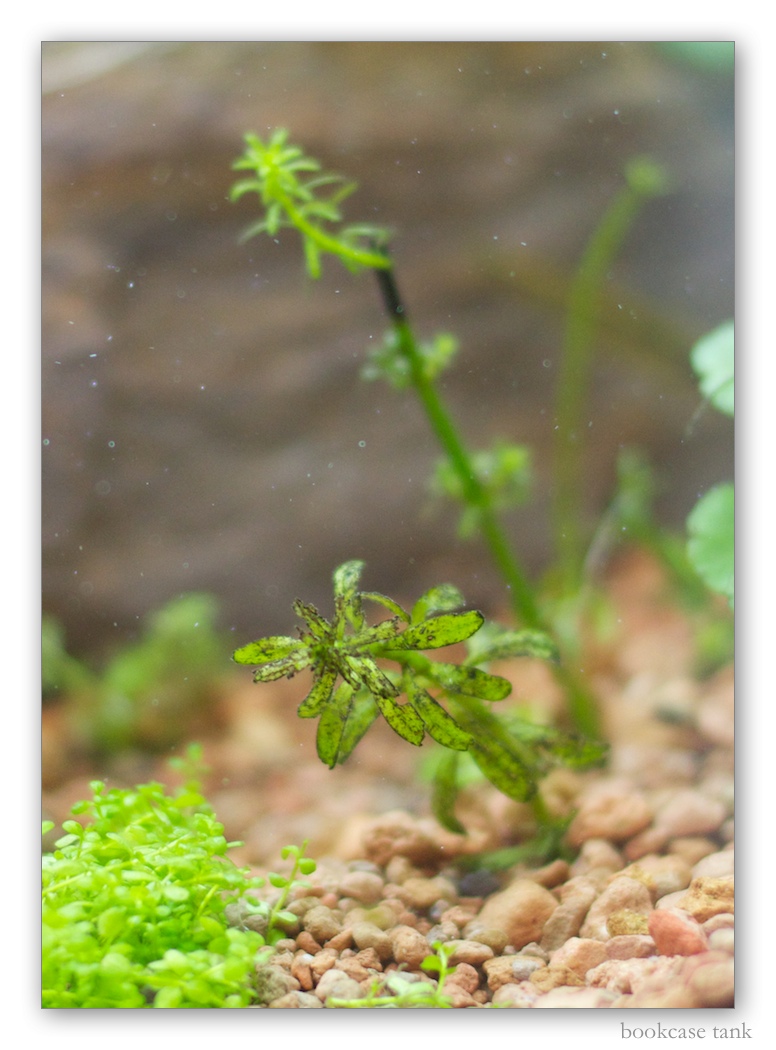 New leaves are fine for a bit... 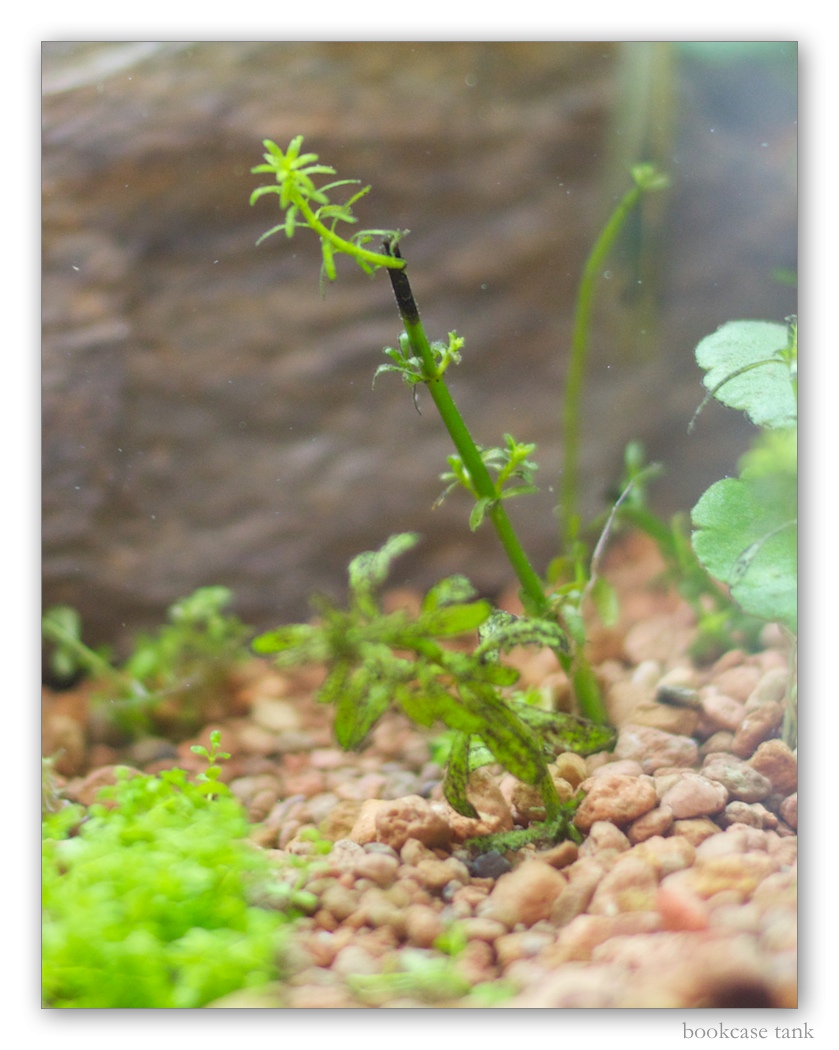 ..but then get the same discolouration. Anyone got any ideas? Don't think it can be CO2 as have everything else growing fine (limnophila aromatic, etc). And it's not algae on the leaves.

Am a bit concerned in general that the molar clay substrate is too inert. (If I was starting again I'd put a layer of slow release miracle gro / osmocote under it). So the other thing I did today was make some DIY root tabs from miracle gro, by putting a little bit in a frozen fish food tray with a bit of water... 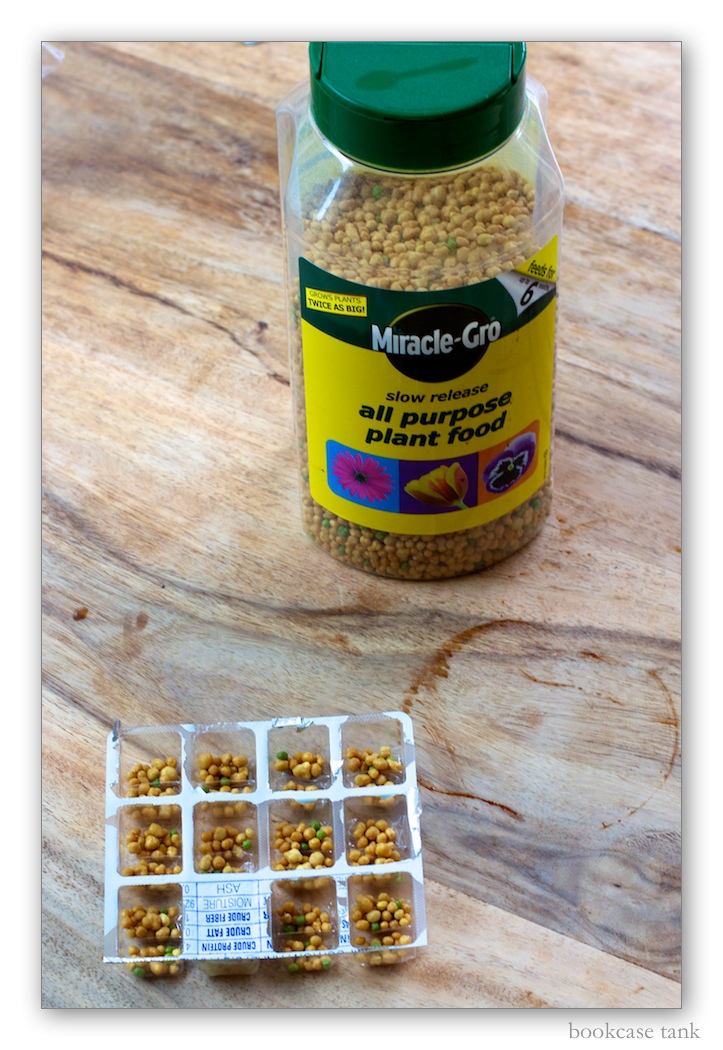 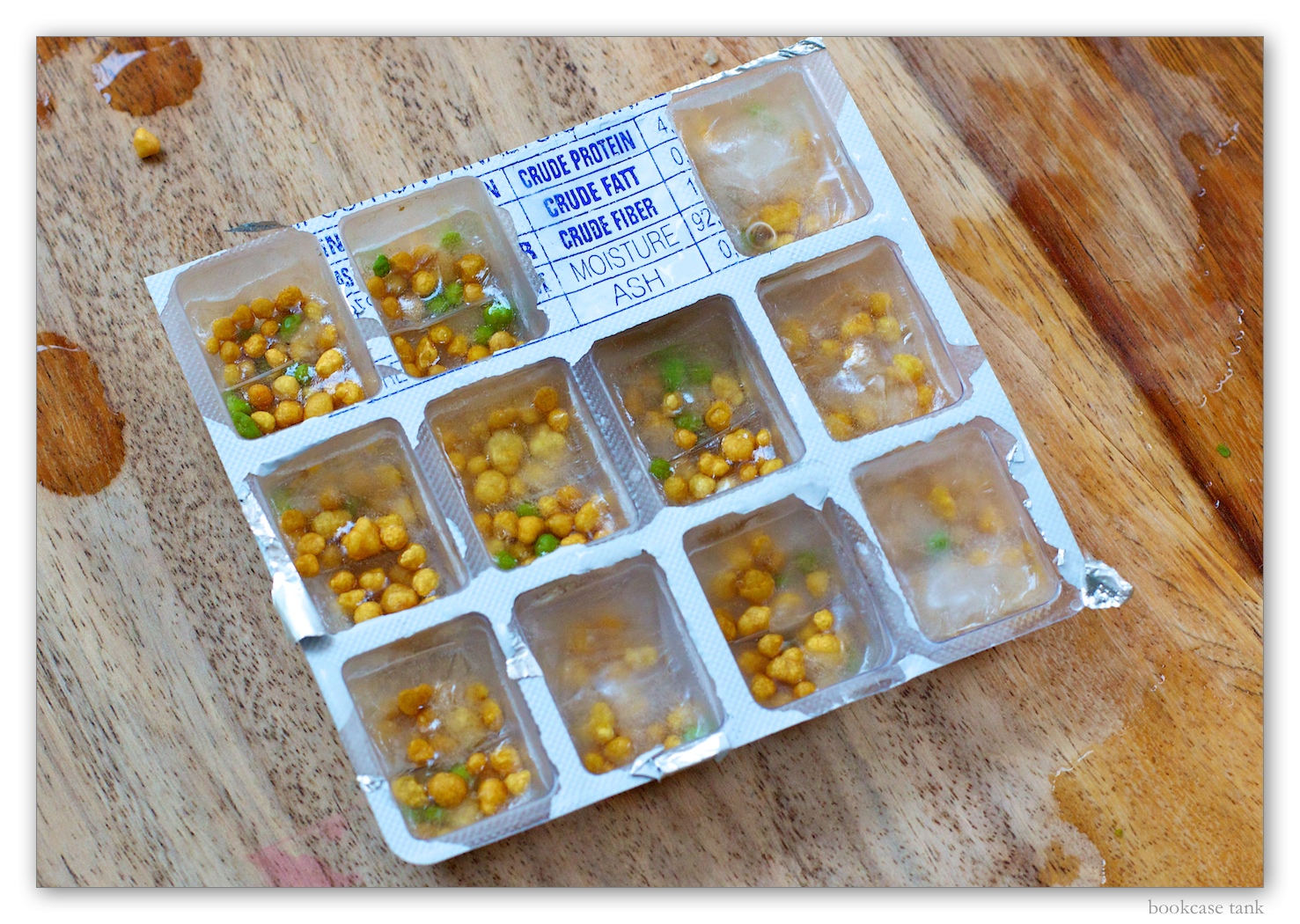 And then breaking them up... easy to pop under the substrate where needed. 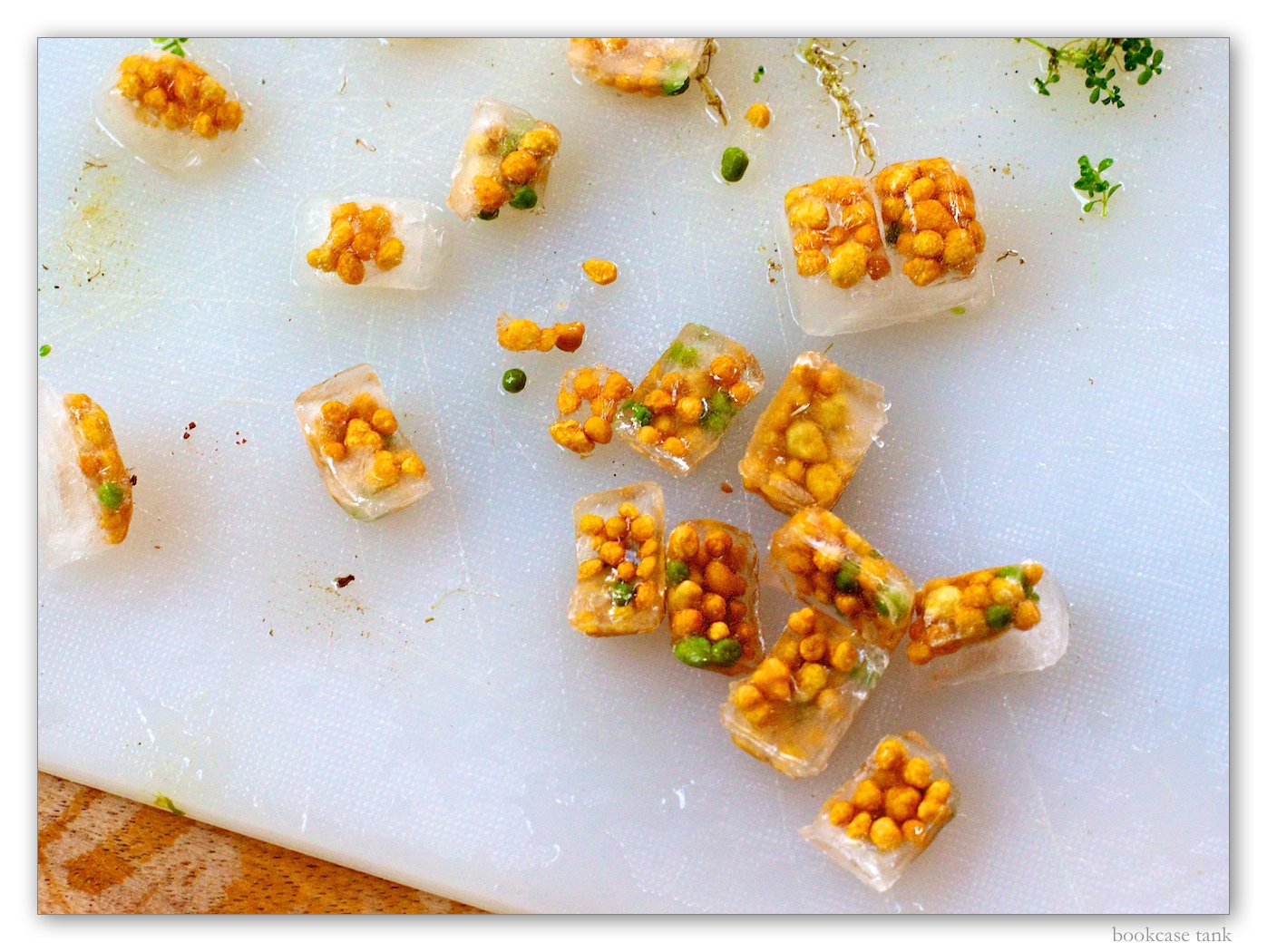 Will release a bit of ammonia, but hopefully not too much, and it will be far enough down for the bacteria to deal with it.

Photos of the tank when it's dark enough outside, and I'm not doing something else

Have made a few alterations and it's much improved.
140 forest journal / a hardscape analysis thread / a summary of stuff learned from ukaps / the transparent tank journal
A

LW is great isnt it !? Will you be joining us on the UKAPS group trip there ? I have not checked the thread today. It would be nice to put a name to a face Blyxa at 75p ! How did I miss that on Saturday ! LOL. I got some Rotala too and had a similar conversation about upping the frequency of trace addition. (Which reminds me I must do todays dose ! DUH).

Did you know you can buy the pill capsules to put that miracle grow in ?

So have finally got the tripod out and done some proper shots with the new Canon 600D. Here's a detail. 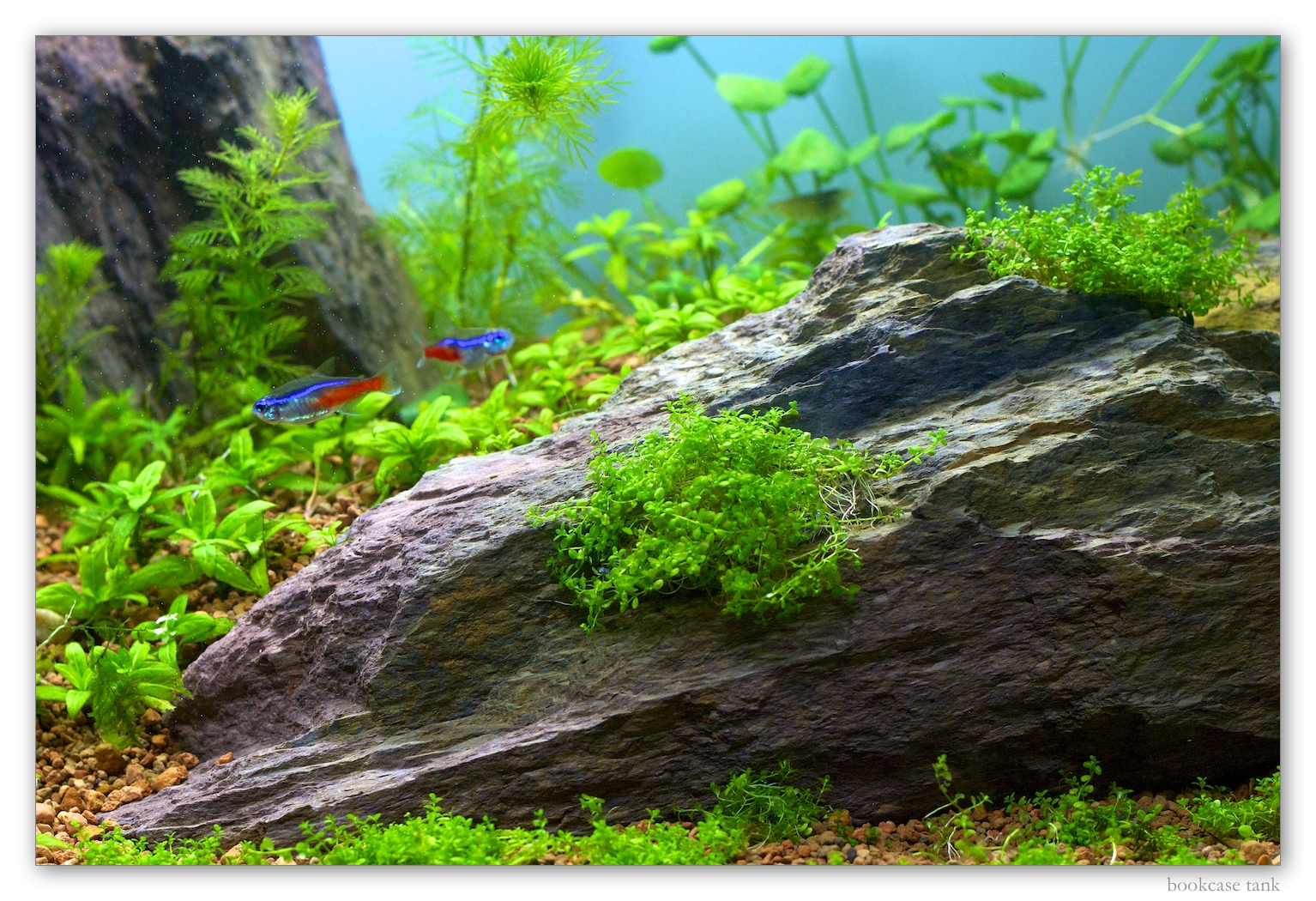 Here's how it was looking a week ago

And here's how it's looking now - the white balance is much better here - this is how it actually looks! (Ok, so this is a bit darker than in the flesh, but there you go . If Mark Evans is allowed big black patches in his FTS then so am I.)

Some tweaks to hardscape: the rock in the middle, most obviously, and have angled the one on the right.

Plant wise, have replaced the crypts with blyxa round the base of the big rock, though these were only tiny and need a lot of growth. More HC has come in, and is weighted on to the rocks with metal plant weights through the rock wool (worth a try). There's Christmas moss on the rocks, and then a bit more rotala - getting there... Some more blyxa and rotala arriving in the post, then just to let it grow!

Have taken some videos too - just need to edit them properly. Love the new camera!
140 forest journal / a hardscape analysis thread / a summary of stuff learned from ukaps / the transparent tank journal 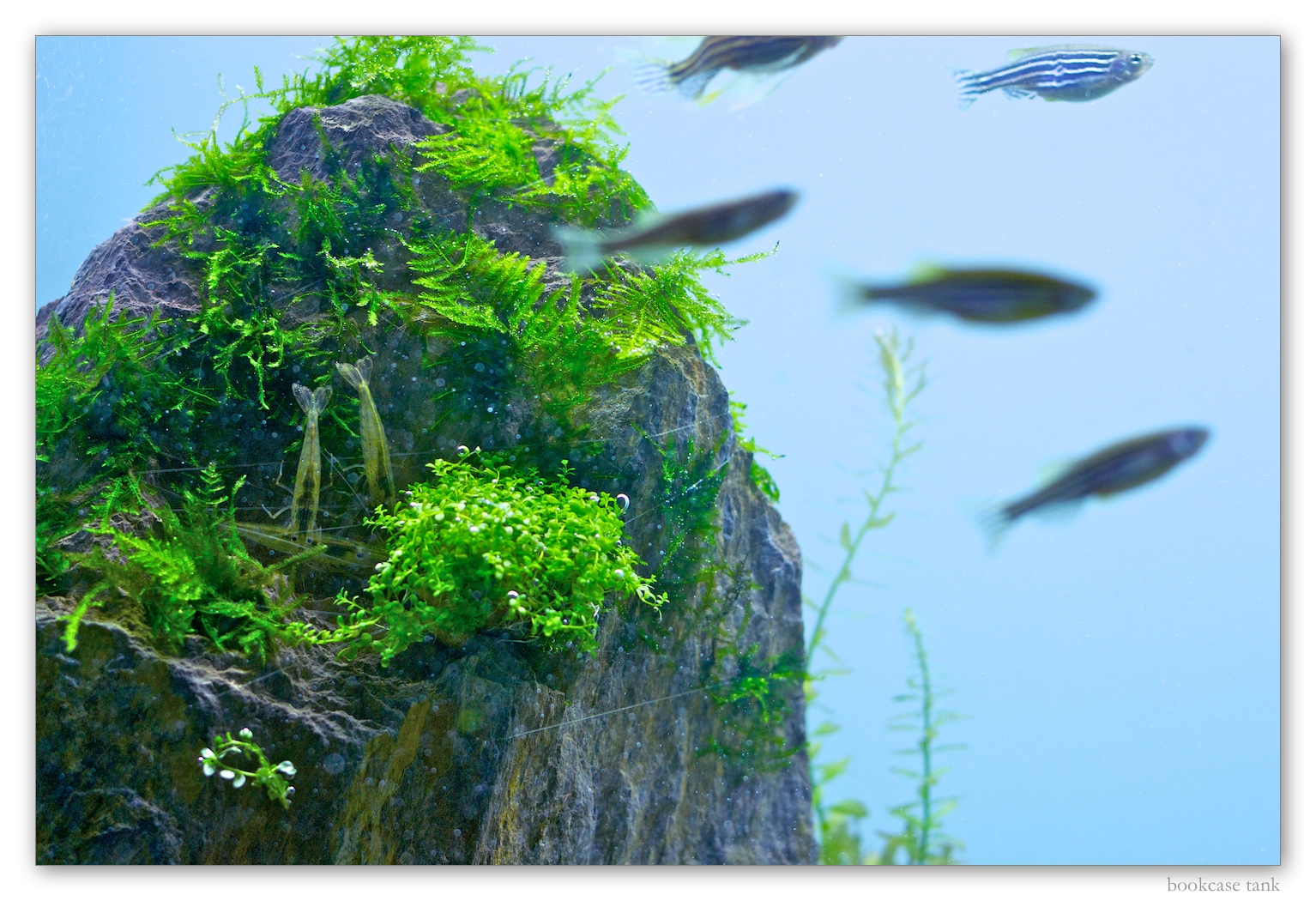 Just been in Devon for a while. Couldn't help noticing the beach I was on had pretty amazing rocks. (Am clearly going slightly mad!) 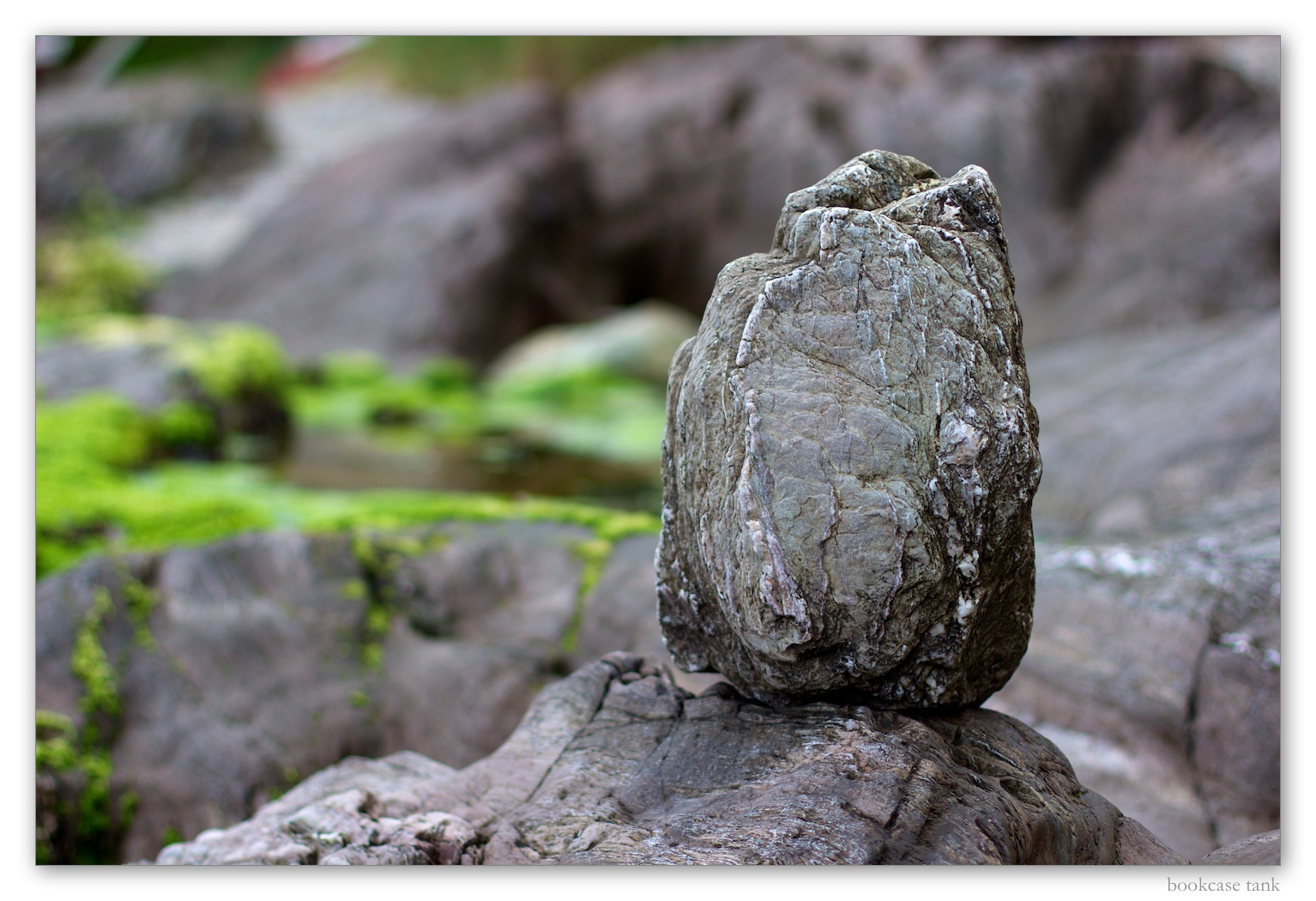 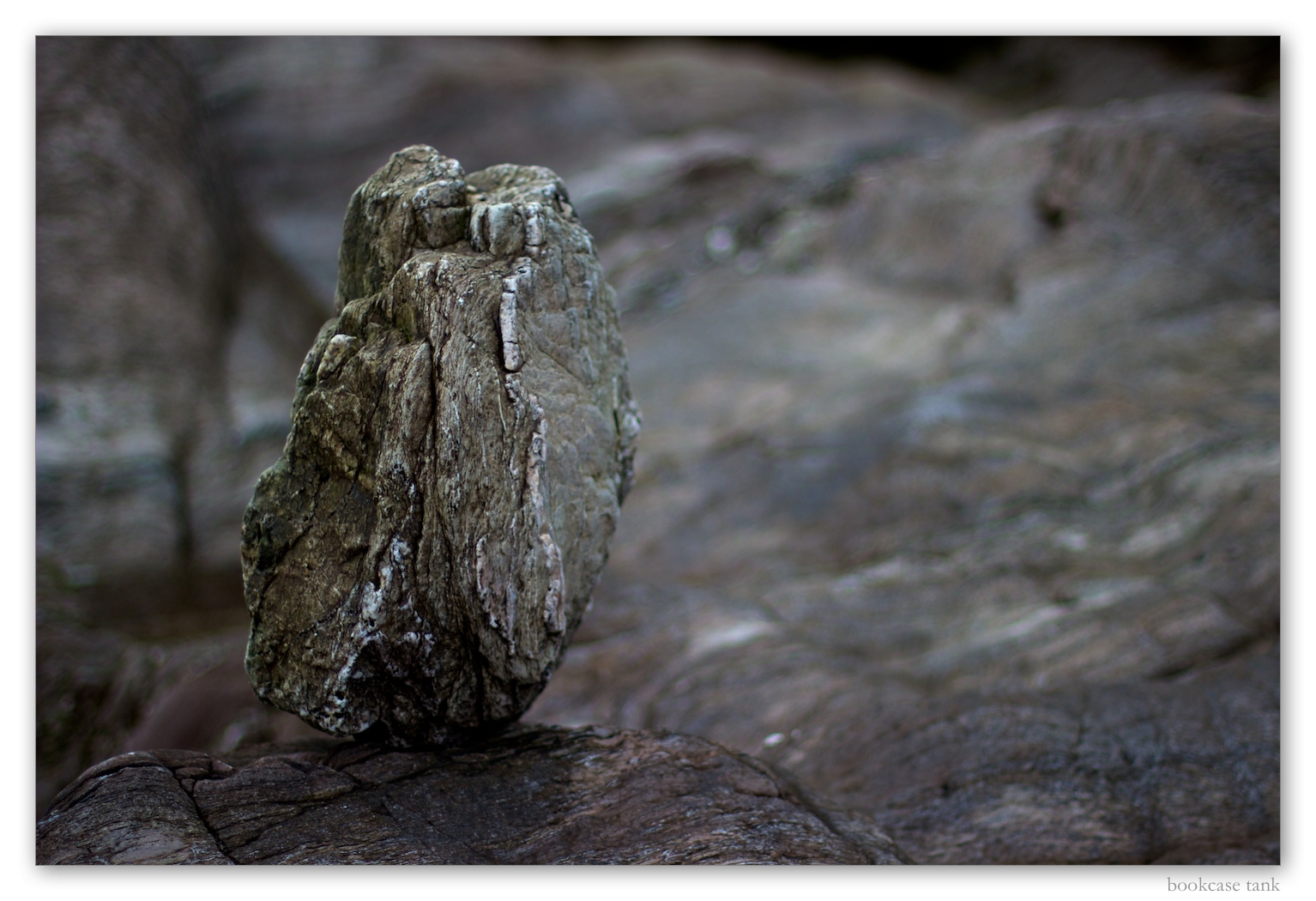 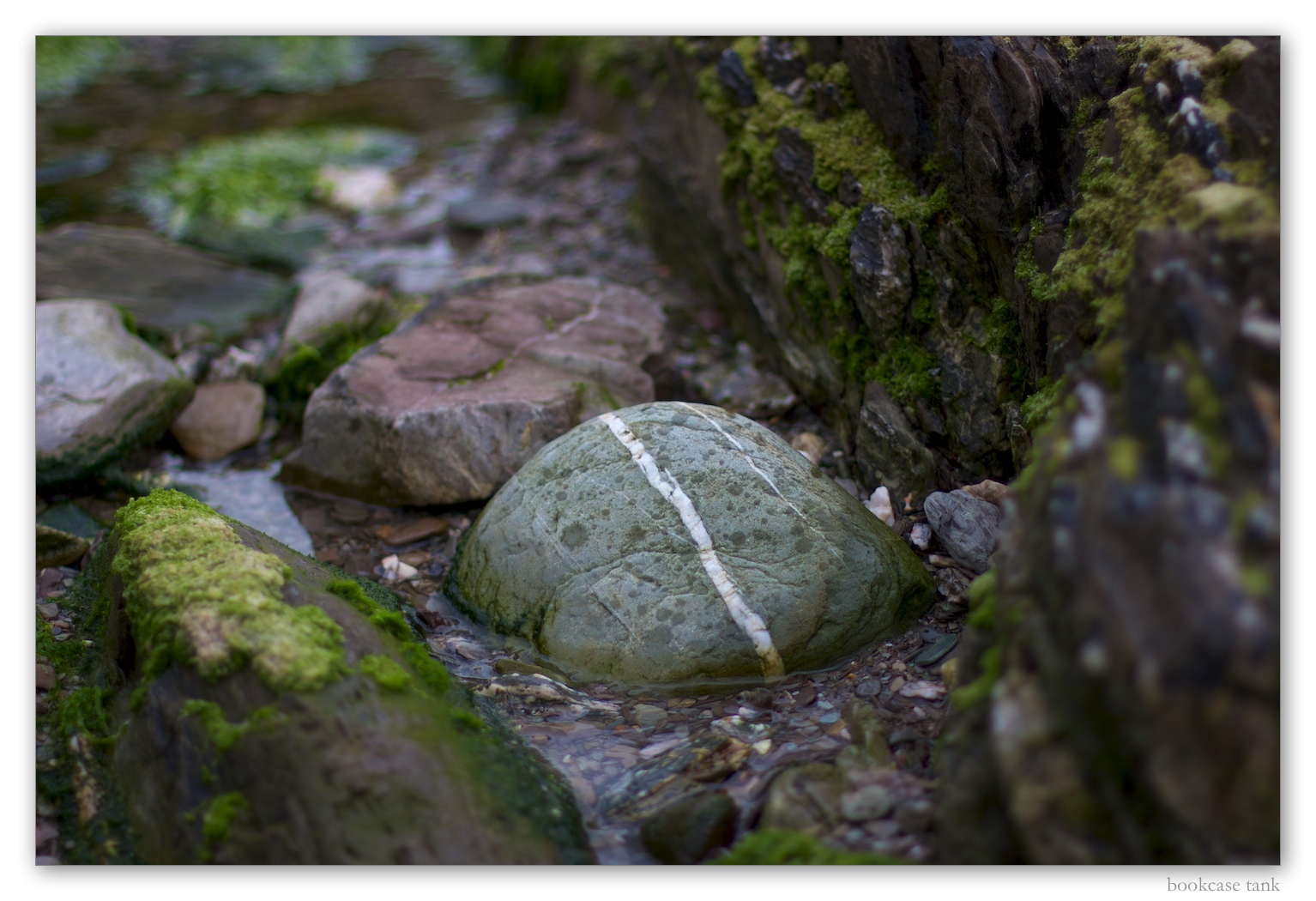 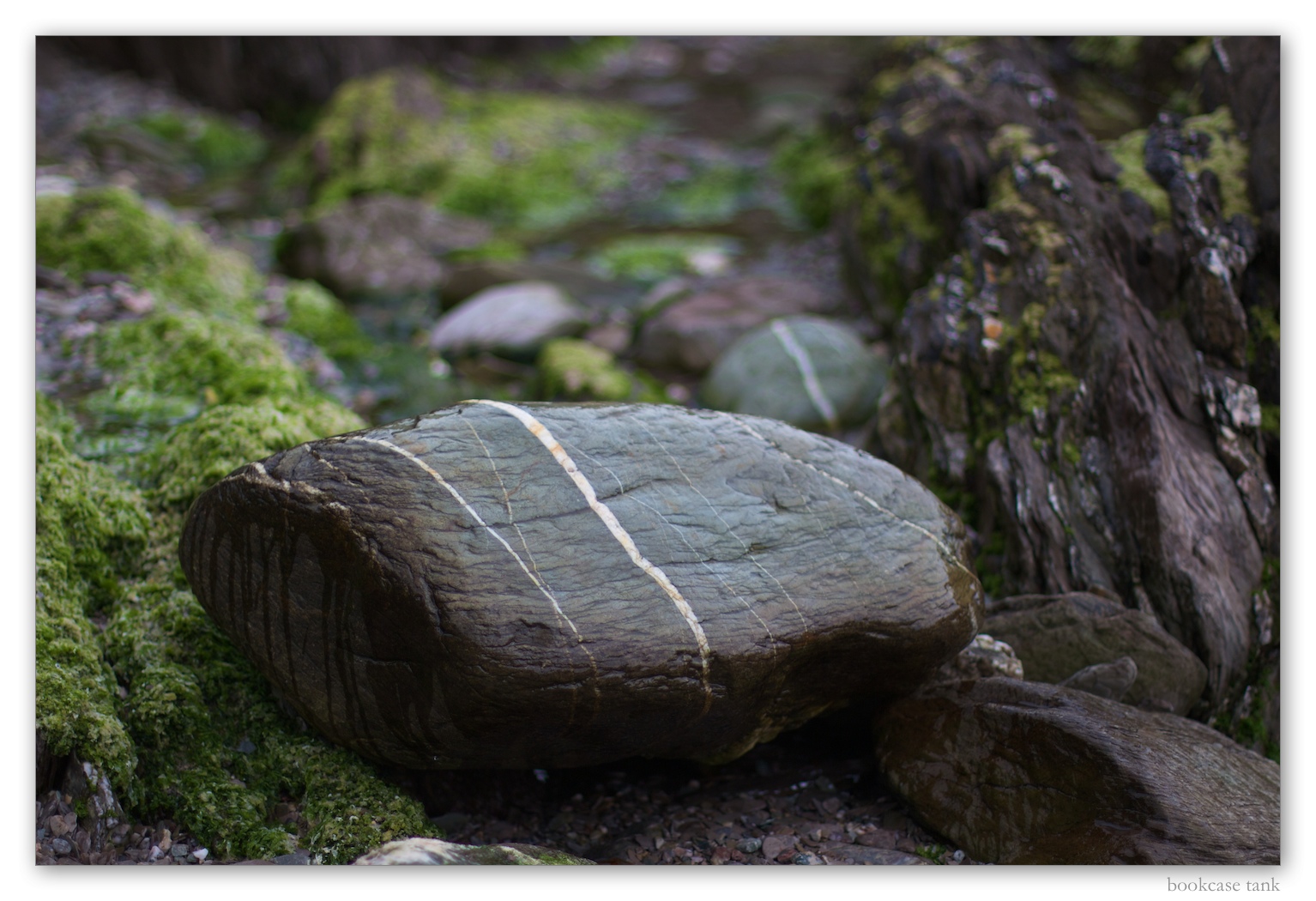 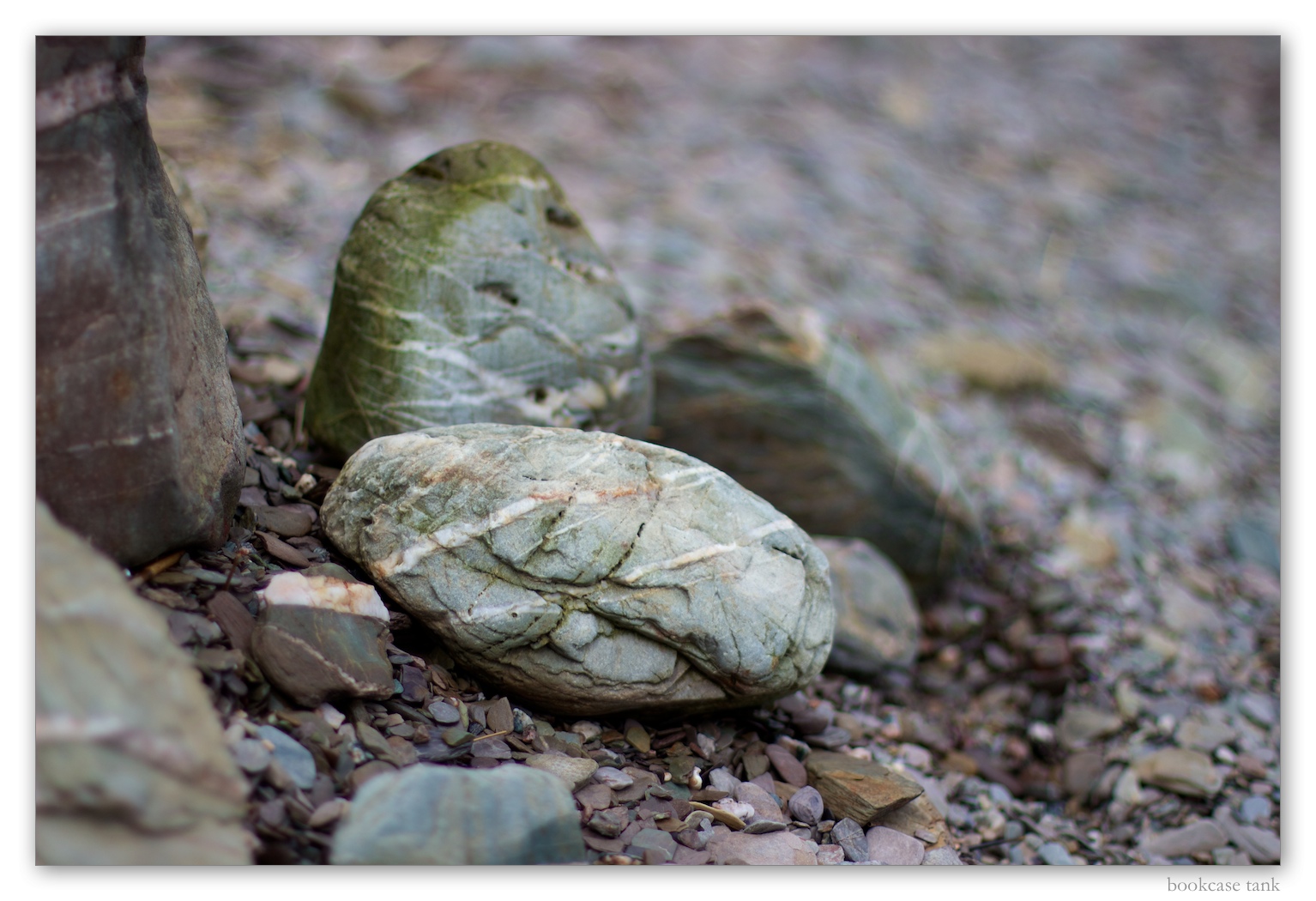 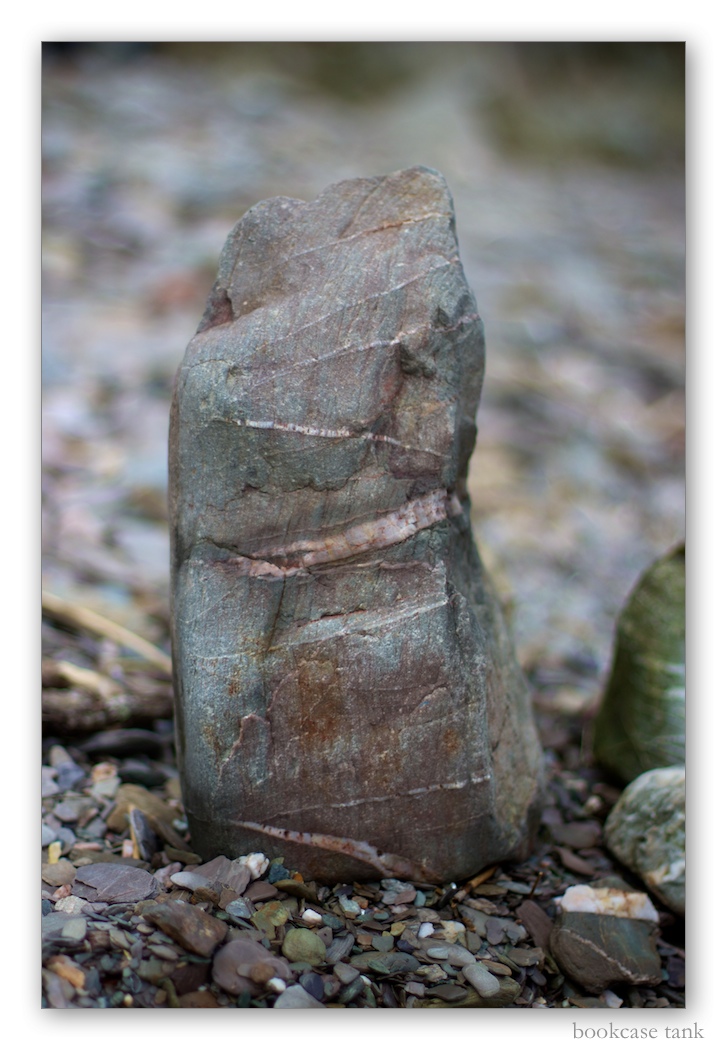 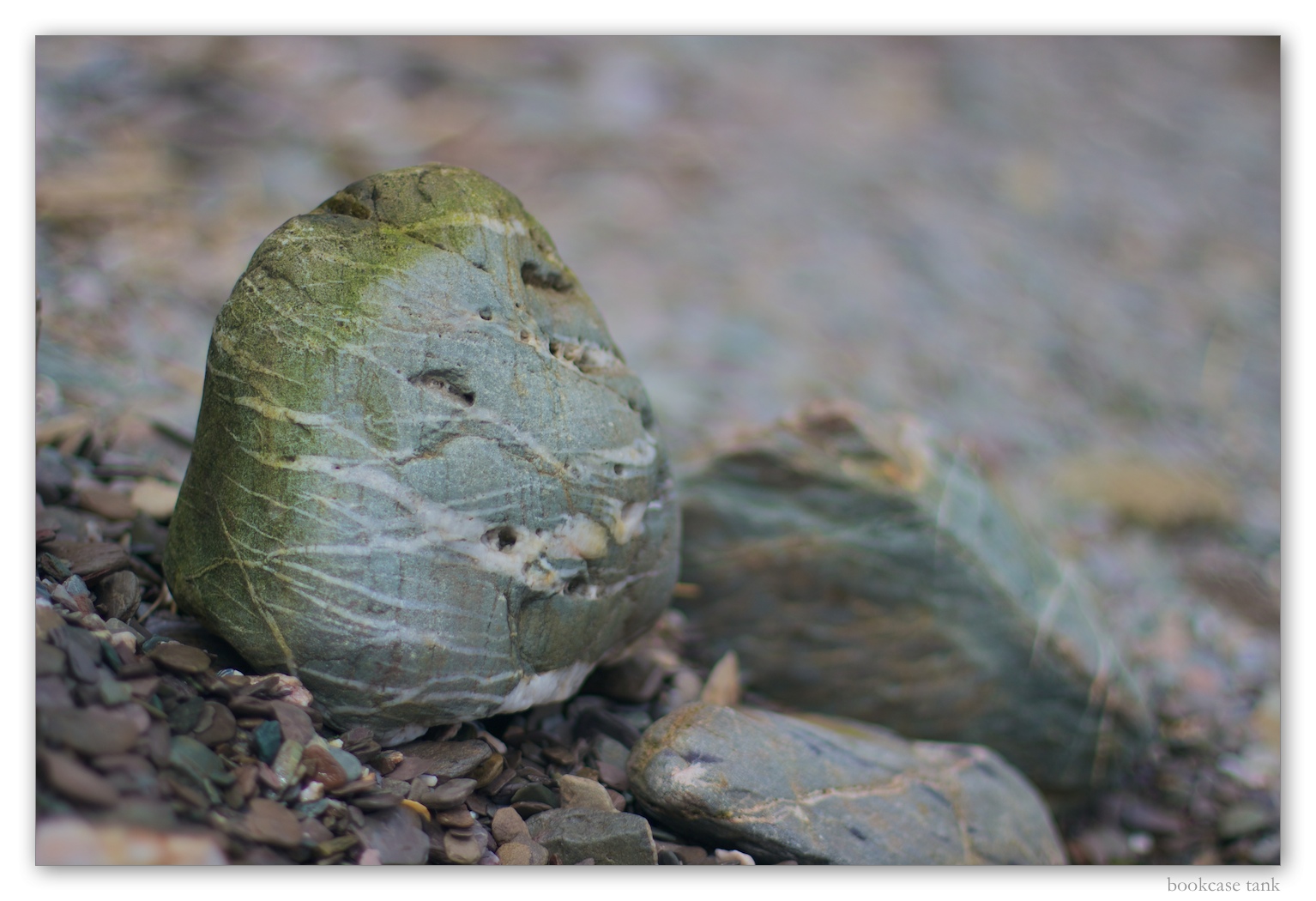 And while, I'm at it, there were also some pretty 'ready made' scapes. 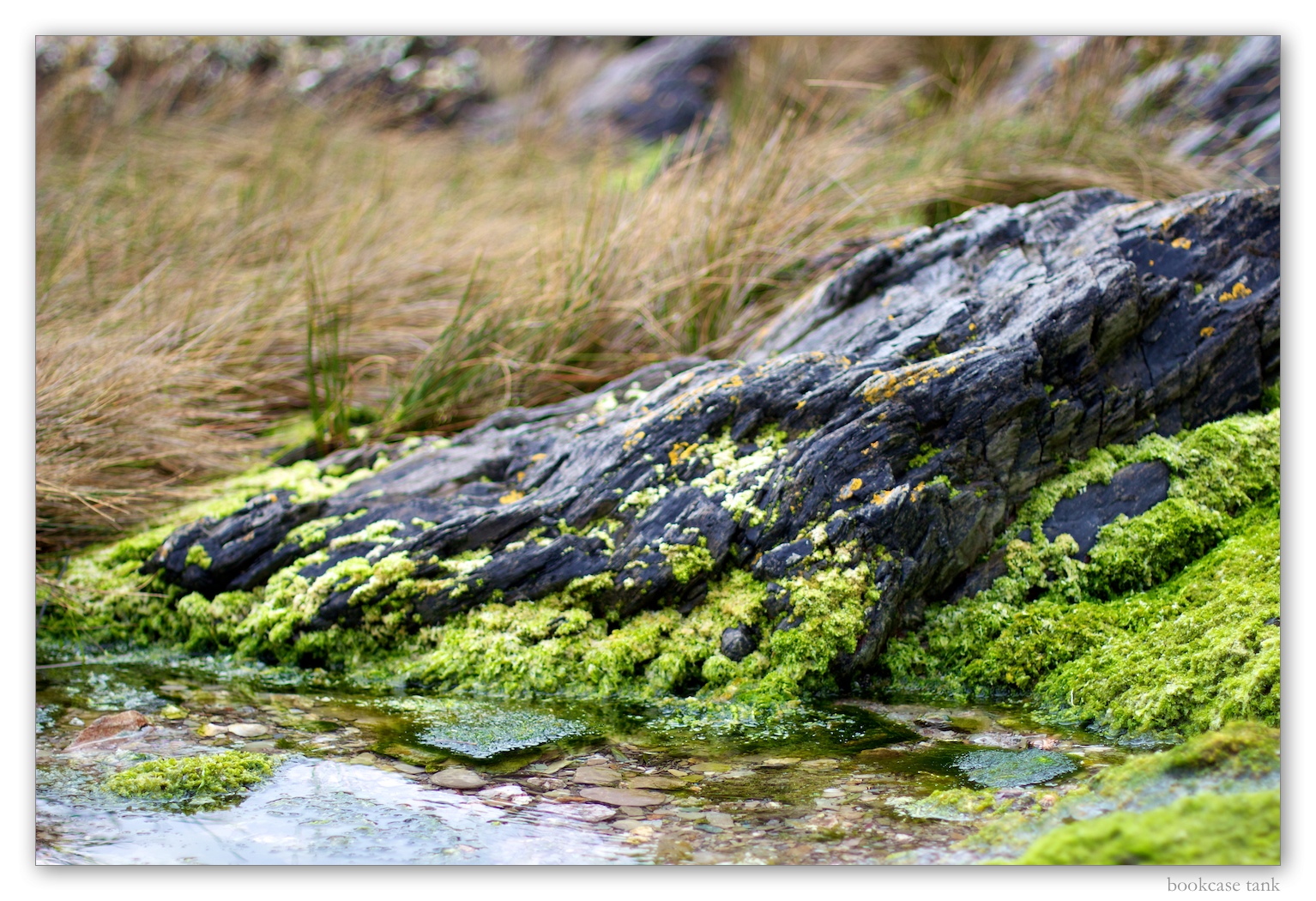 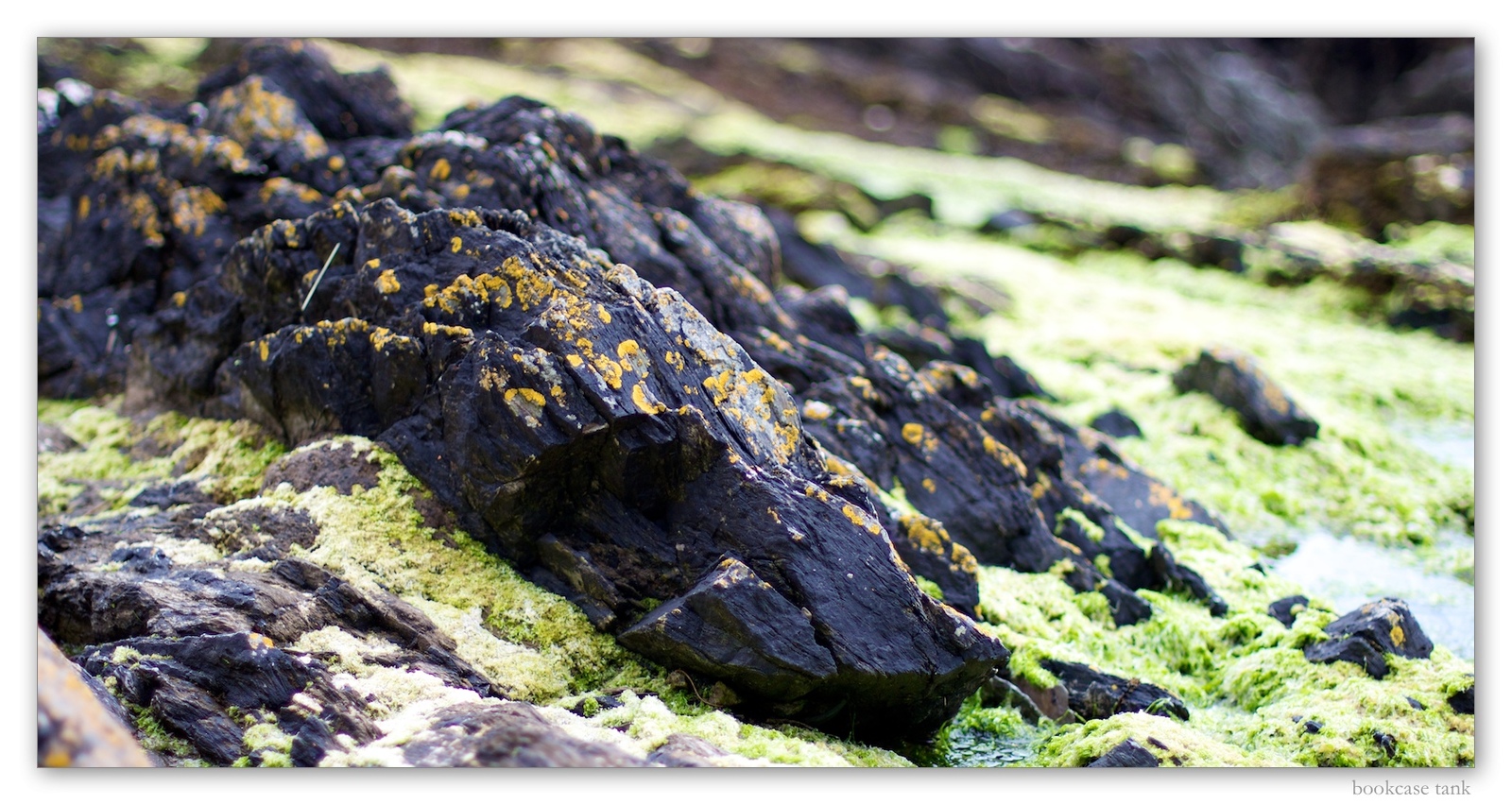 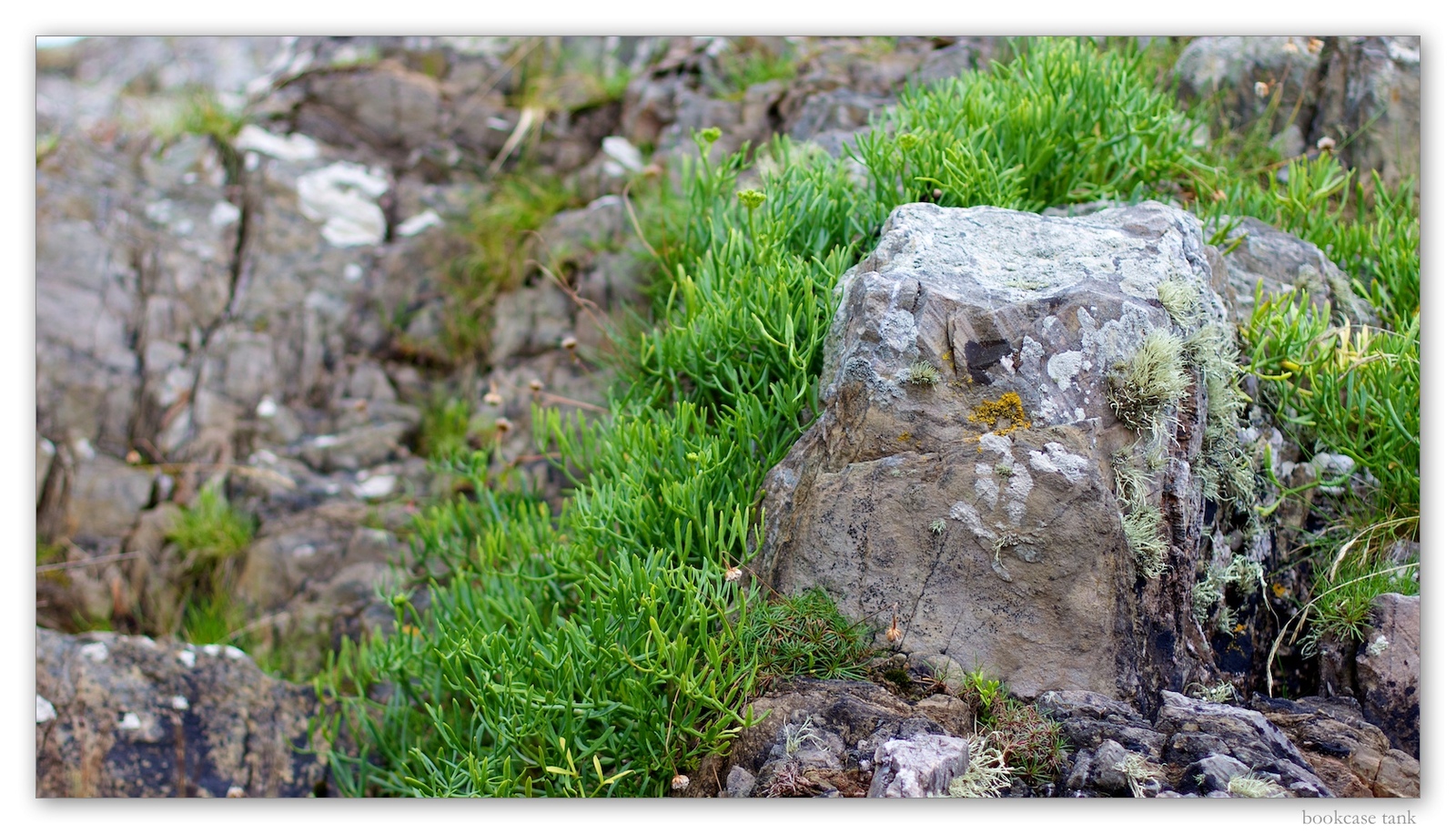 really reminded me of Amano's scape about 20 seconds into this

...maybe he's been in devon too
140 forest journal / a hardscape analysis thread / a summary of stuff learned from ukaps / the transparent tank journal

Now that's what I call inspiration!

Awesome stuff Mike. How much of that rock did you bring home with you ? 8)


Antipofish said:
Awesome stuff Mike. How much of that rock did you bring home with you ? 8)
Click to expand...

None! But I am seriously tempted to go back in a year or two (when I get utterly bored of the purple schist stone I've got now). Was mountains of it everywhere. Love those white-veined rocks.

Here's the tank after a week away.

As per usual, grabbed some random plant samples from streams to see if they grow. Am determined to discover something new.

This is I think Sea Blite 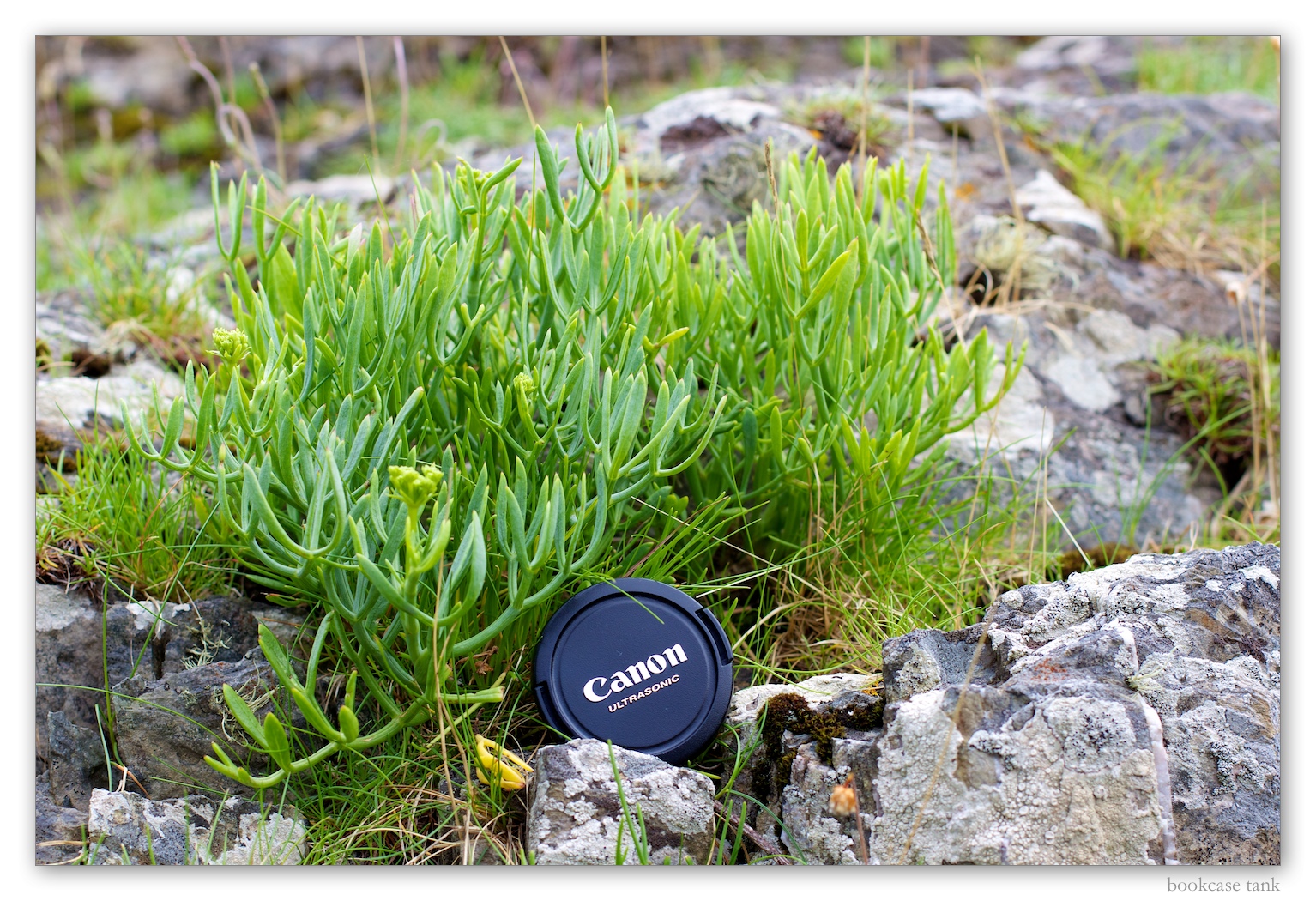 A marsh plant that I'm sure will die as it needs salt. But we'll see.

This I don't know what it is, but was growing submerged sometimes in streams. Though with the weather we've had, maybe it's not usually a stream. Anyone know what it is? 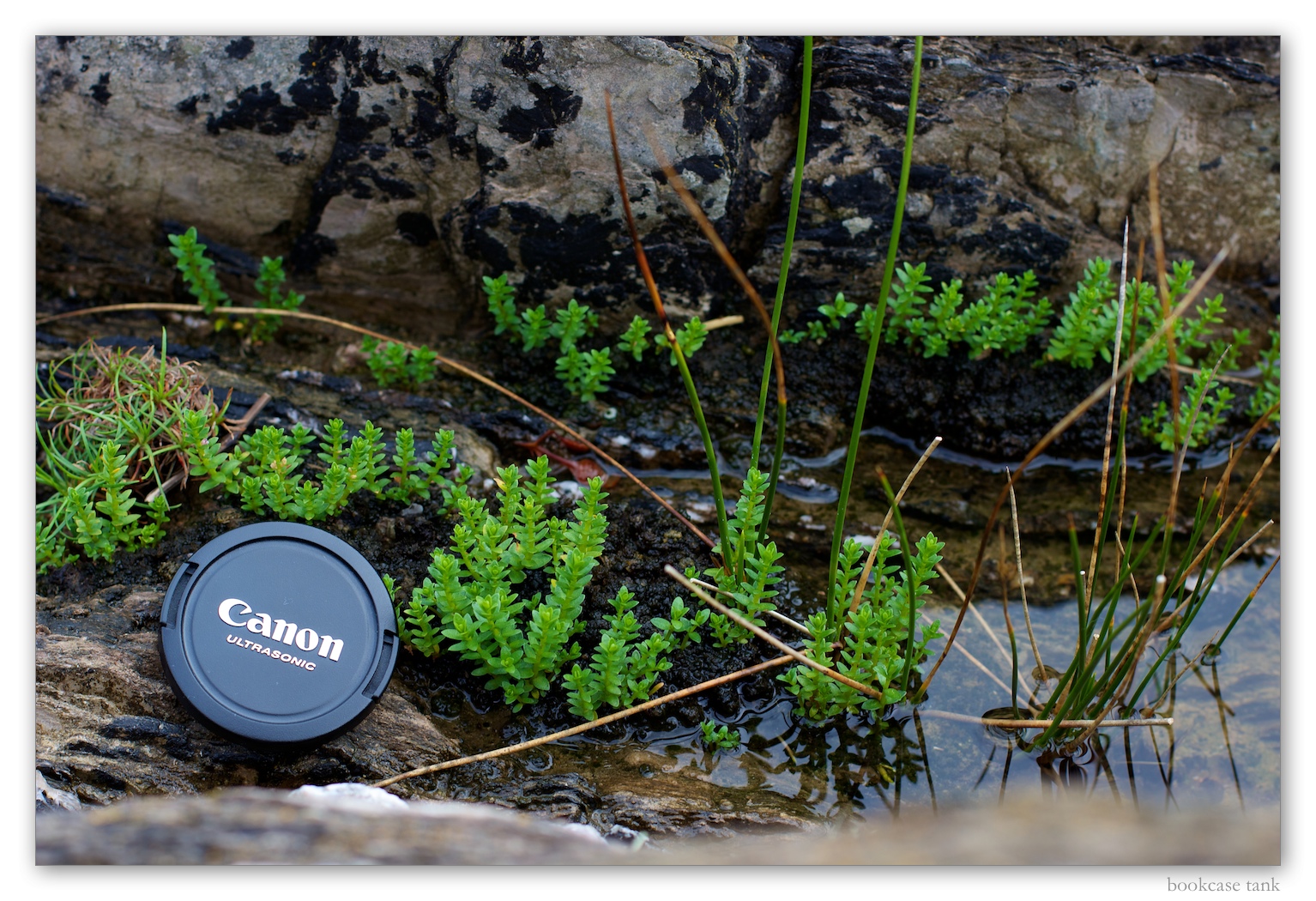 I have no idea what the second pic is but if it grows can I have some cuttings please? Its a lovely structural plant.

PS did you see my question to you on someone elses thread about your external pump setup ?

Was that my thread? I wanted to know more about it too! Sounds interesting.
My planted ADA 60-P
Rob's 300L
Rob's Fluval Edge

The plant in the last photo sure looks to be some relation to ammania sp. 'Bonsai' or Bacopa Caroliniana don't you think?
Nathaniel
[url=http://www.ukaps.org/forum/threads/in-my-dreams-i-see-palettes-of-green.22321/page-16]'In my Dreams, I see Palettes of Green'- (600x400x400)[/URL]

The Devon pics looked great! What beach was it? I've never really considered nabbing plants from the countryside - wouldn't they need temperate conditions to thrive? I like the idea, though!
***************************
My nano Dartmoor-inspired tank

Re: CO2 and surface flow

Interesting - now have a drop checker that's yellower than I've ever had it, and no gasping at all from the fish. Really think the Tom Barr technique of surface agitation plus high CO2 might have something potent to it!


plantbrain said:
Think about it like this, the O2 and current rise the CO2 ceiling much higher and improved fish health and cycling of all waste MUCH faster and better.

It's a large jump.

But it's not just 100% about adding more CO2.
That is the root issue for algae and other plant issues, but there is much more to it than merely turnign a knob for Co2. :idea:
Click to expand...

Hi there, can you direct me to the above discussion? Many thanks, nice tank, will you cover the whole large rock in moss, some more around the base might look good
A


pariahrob said:
Was that my thread? I wanted to know more about it too! Sounds interesting.
Click to expand...

Yes it was Rob


Whitey89 said:
The plant in the last photo sure looks to be some relation to ammania sp. 'Bonsai' or Bacopa Caroliniana don't you think?
Click to expand...

Yeah,... I was thinking the same thing. And Mike,...the tank is really taking shape now especially with the mosses in their place.If you don't mind me saying (the fact is I just couldn't help myself after seeing your latest pics as these were the first train of thoughts that came into mind) ,....I think if you plant large rosette plant like an echinodorus bleheri at the rear left corner there,..it would really look kinda cool. The mosses are rendering your entire scaping style a very mystifying look now.

And maybe raise the substrate at the rear right to create a nice little hillock effect rear to the other rock at the right midground.

You can tell me to shut up anytime.


Antipofish said:
I have no idea what the second pic is but if it grows can I have some cuttings please? Its a lovely structural plant.

Sure – though my track record is appalling on ‘finds’! But if you don’t succeed…

PS did you see my question to you on someone elses thread about your external pump setup ?
Click to expand... 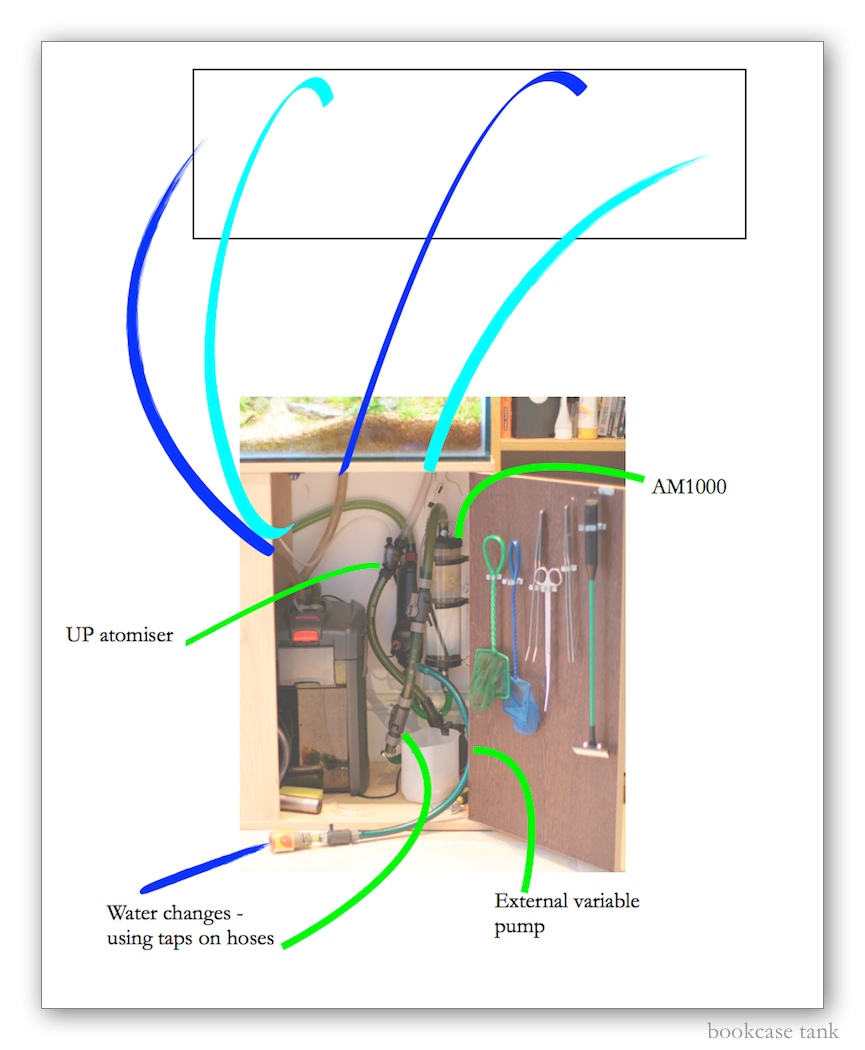 pariahrob said:
Was that my thread? I wanted to know more about it too! Sounds interesting.
Click to expand...

Eheim 3000 compact pump. Seems to work well. There’s no clogging at all.


Whitey89 said:
The plant in the last photo sure looks to be some relation to ammania sp. 'Bonsai' or Bacopa Caroliniana don't you think?
Click to expand...

Fingers crossed – would be great if it works!


sarahtermite said:
The Devon pics looked great! What beach was it? I've never really considered nabbing plants from the countryside - wouldn't they need temperate conditions to thrive? I like the idea, though!
Click to expand...

No idea. Not telling which beach until I’ve won some competitions with stones from it!


james3200]Hi there said:
the tanks really taking shape now especially with the mosses.
Click to expand...

Thanks – am pretty pleased with it. The rear left has pogostemon stellata (recovering but now looking quite healthy) and limnophila aromatica, so those should bush out nicely with bigger leaves. Totally agree about the substrate on the right. Seems to have settled down lower than I'd thought. Just want to see if the stauro growing up might compensate for that.
140 forest journal / a hardscape analysis thread / a summary of stuff learned from ukaps / the transparent tank journal

Have finally sorted out the AM1000. See earlier in this thread for trials and tribulations. Have been using an UP atomiser for a while, but find the CO2 rate does change as the bottle loses pressure, so you need to keep adjusting the regulator. Is also hard to see how much you're using. What I like about the AM1000 is the bubbles are large out of the tube, so you can easily keep a very regular track, and it doesn't rely on pressure.

After trying lots of combinations (no media, media it comes with, shower scrunchies) have found that pebbles - yup, pebbles - are actually perfect. They slow down the gas diffusing up perfectly, are heavy enough not to rattle or jog, so are completely silent, and even look cool. 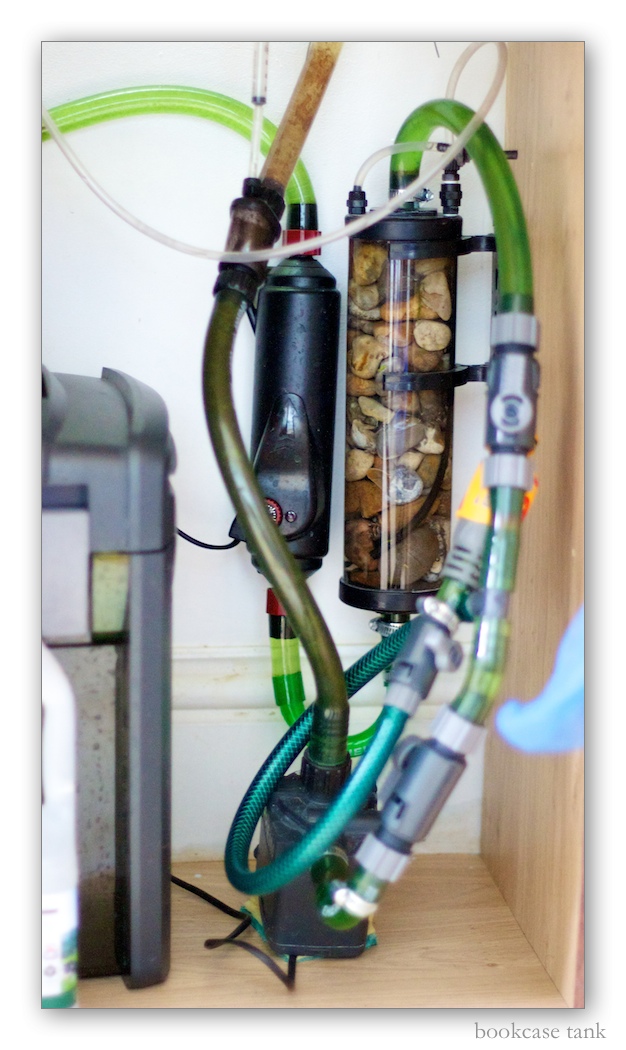 So now have perfect diffusion, crystal clear water, no noise, and no reductions in flow to my filter, as is on the other loop with just a pump driving it. Sorted!

Glad you got it sorted Mike. Now I want my AM1000 back (having sold it a while back due to loss of flow ) Lol.