Gill said:
Apologies if already mentioned, but what stocking is in these ponds.
As me personally i would put in some Paradise fish, Medaka, WCMM, Danios, Sunfish etc as there are multiple ponds. You could have different fish in each one.
And Medaka, Paradise WCMM etc will winter fine in in the UK outside.
Click to expand...

No problem Gill. Great recommendations, thank you. I have looked into all of these. I would love to have Pumpkinseed Sunfish but this is not allowed here for understandable reasons. The pond closest to the house has Fundulus julisia. The second pond has Aphanius mentho and the third pond has a large group of Macropodus ocellatus and a few WCMM. All are outside all year round. I wrote in some detail about them earlier in the journal. Now you mentioned the fish, I might as well give a brief update on them.

The Fundulus julisia are doing ok and I have spotted a couple of fry in the pond but lost a few adults during the winter. I still have 14 adults but think I put in over 20 of them. They stay close to the surface so you are able to see them most of the time. Maybe you or someone here can help me - does anyone know how to raise the pH of pond water? I would obviously need to do a reading first but I know these fish prefer harder water. I have read an account of a German breeder who covers the mini-ponds he breeds them in during the winter, to stop the rain softening the water. I have kept a separate group of julisia in one of my few remaining tubs but I have been too busy this year to breed them (cleaning out tank/ looking for eggs/ separating fry etc).

Here is a video of them in the tub;


Also still in another large tub are a small group of Fundulus catenatus, one of the largest killifish and stunning during breeding season (around now). They are extremely shy and I only catch glimpses of them when I feed them some earthworms from time to time. This is the only picture I was able to take of one of them in the tub: 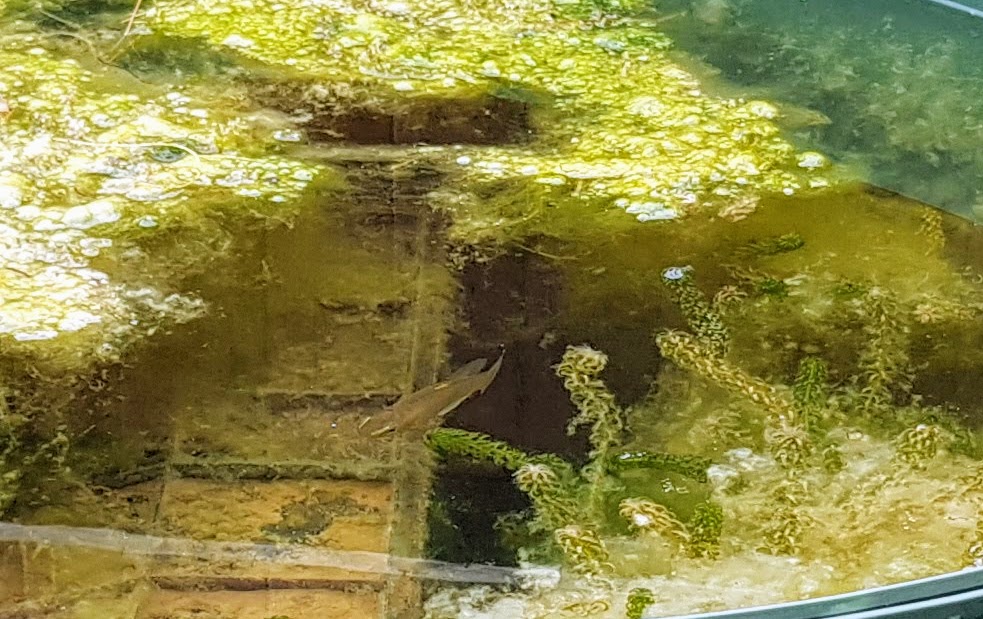 My original plan was to breed them in the tub this year, raise their numbers, hold back a breeding group and release the rest into the pond, so that if they do not reproduce in the pond, I still have a group kept aside. I have been too busy this year and will have to see whether I will have more time next year. I am in two minds and part of me thinks I should just release them in the same pond as F. julisia and hope that they might both reproduce. I mean, realistically, don't I have enough on my plate trying to look after the garden and all these ponds??

F julisia lays eggs in the thread algae (as described in my earlier post), catenatus needs moving water over a tray of gravel, in which it will lay its eggs. Last year, I placed a tray and pump in the tub and caught six fry which I grew on indoors but they will not be ready to breed for at least one more year. Such a shame I have been too busy, as both are extremely rare in the UK but this year has been all about the garden and trying to stay on top of the project.

The Aphanius mentho are thriving and the pond is full of fry. In contrast to F. julisia, which seem less shy when kept in a tub, you see a lot more of A. mentho in a pond. Out of my fish, they are the most fun to watch, with males constantly defending their territories and chasing each other. Here are some of the fry; 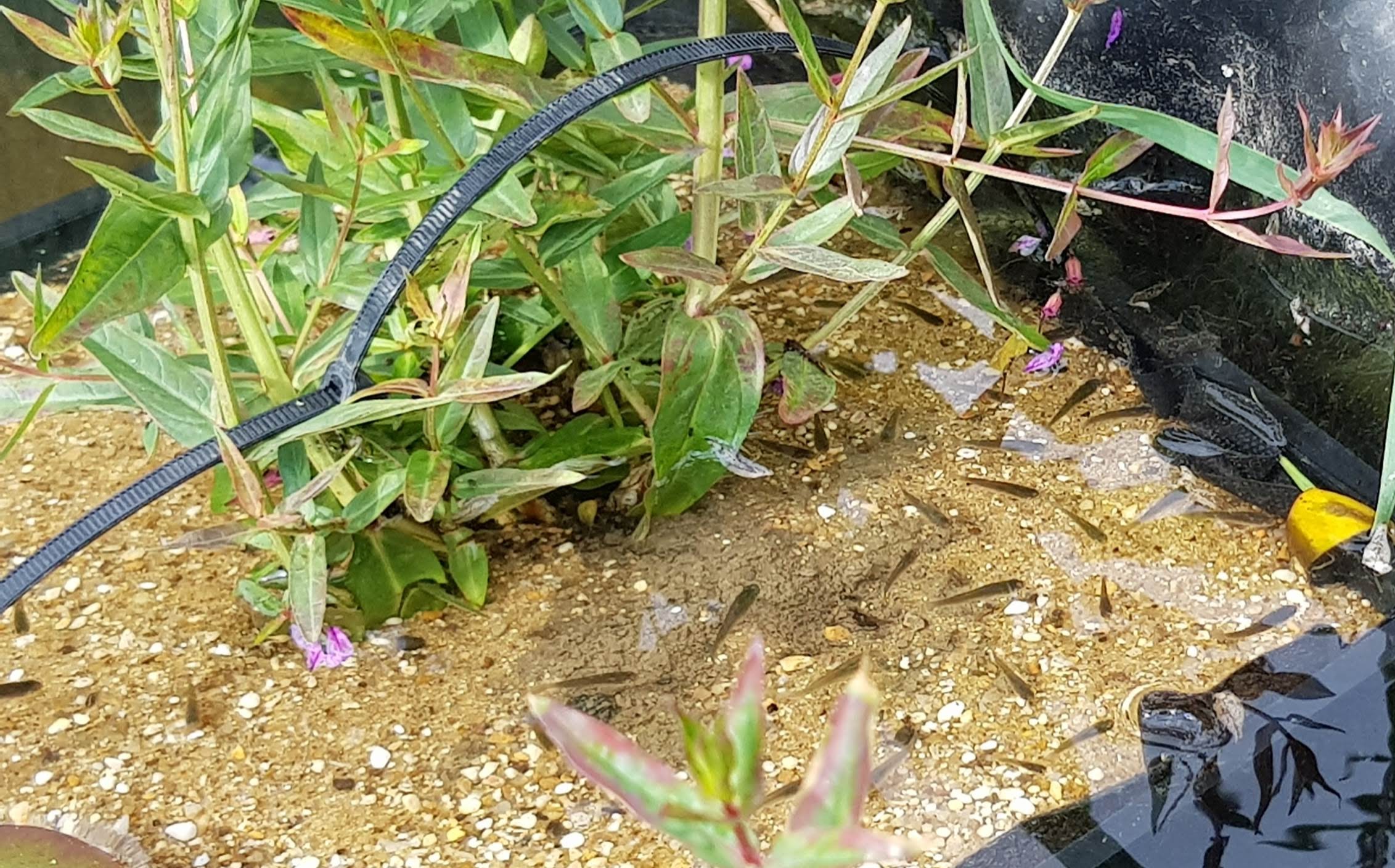 The Macropodus ocellatus I rarely see, just a brief glimpse every now and then. It remains to be seen if they will breed in the pond. They like the water to heat up and I am not sure if the pond will be as optimal for that as the tubs I used. I also still have a a group in a separate tub which I also need to sort out and decide what to do with. The WCMM I put in the pond were quite old and I am not sure how many survived the winter.

In terms of wildlife in the garden, my absolute favourites, above frogs, toads, newts and even fish - are the damselflies and dragonflies. So many visit the ponds already. As some dragonflies spend more than a year in the water as larvae, I like to think that by leaving some of my ponds without any fish, I will have an abundance of dragonflies from next year onwards when dragonfly larvae born in my ponds start to emerge... Today I took a pic of what I think is an emperor dragonfly laying eggs in one of my ponds: 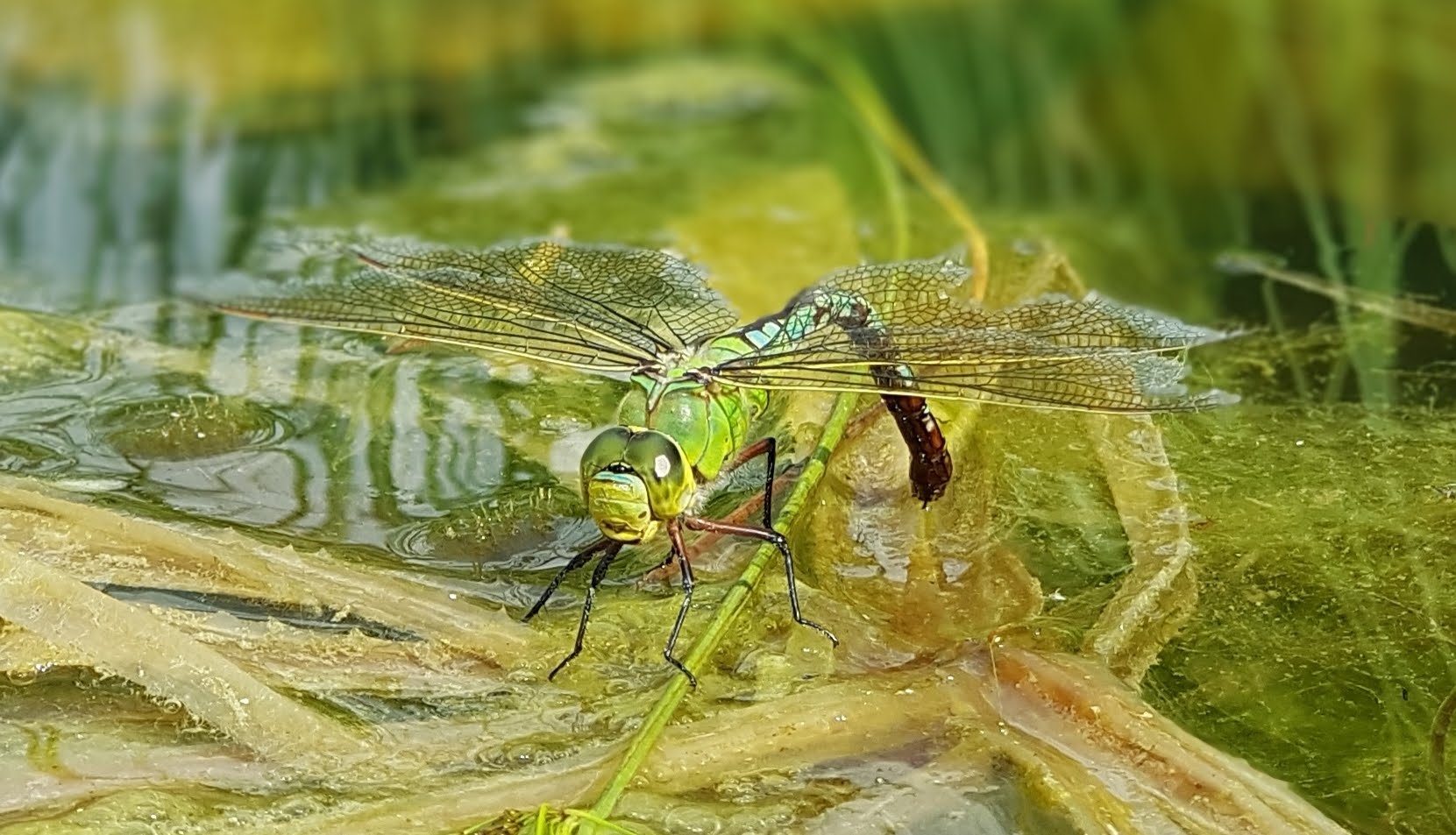 LondonDragon said:
What do the neighbours say now? Since they thought you had a loose screw at one stage haha
Click to expand...

I am sure they still think I am a bit obsessed which of course I totally am. The front of the house is a drive and still has hundreds of plants in pots which need sorting out. But at least this madman now has something to show for his sins. When they see my garden - and many have - they are amazed and say things like 'thanks to you my wife wants me to sort out the garden'. A few families bring their small children every now and then, which is really nice and I show them the tadpoles and fish fry. Two families say they want ponds as well and by next year I might be providing the entire neighbourhood with spare pond plants!
Last edited: 15 Jul 2021

Those are a very nice selection of fish to have indeed. And it certainly looks like a plethora of life to enjoy.
There are some sunfish you can keep in the uk. And sometimes they pop up on BAND and Aquarist Classifieds. Aqualife leyland has some males atm. Have you c=joined the coldwater groups for the uk, some lovely ideas on there about fish you can try. Sure I saw someone with Yelllow/snakeskin/3 spot gourami's outdoors.
If I had the room and the necessary licence I would love to have a tropical pond with Gigas and Hi-Fin Sharks and a few other larger fish.
I see you made a nice little platform for dipping your feet into, have the fish discovered this yet, and allowed them to nibble the dead skin. Guppies would certainly do this, as they do so in tropical tanks. And also the Variatus Platties. And the Coral Platties have done well as well and add a nice splash of red to the ponds etc.
I would be so tempted to throw in some of the temperate Barbs etc and see how they do outside in the uk.
Threadfin rainbows do very well in the uk outdoors, have kept them in the past in barrel ponds etc.
Meander, Titans, Sea of Ferns, Counted Sorrows
Experimentation is the key to growth - Pardeep

Thanks for the suggestions Gill. Did you keep threadfin rainbows outdoors all year round?

I posted this earlier in the thread, in case the info in the link is of interest to you;

killi69 said:
I found this resource quite useful: a list of fish suitable for outdoors (not all of them all-year round) with indicative lower temperature tolerance ranges compiled by Martin Tversted from Denmark. Especially if you are prepared to take them indoors over winter, the choice is huge. It is a great starting point from which to do further research.
Click to expand...

In addition, I researched Dutch and German pond forums years ago to see what fish people had successfully tried outdoors all year round and which ones did not work out. From what I remember, people had not been able to keep guppys, platties or barbs outside year round (but had great results during the warmer months).


Gill said:
I see you made a nice little platform for dipping your feet into, have the fish discovered this yet, and allowed them to nibble the dead skin.
Click to expand...

Is that what the platform is for

I have not tried dipping my feet yet but the fish I have are not yet that tame (or hungry). I know what you mean, the same species in the tub would nibble your fingers but the ones in the pond are quite skittish.

If I were to add more fish, I would consider Cyprinella lutrensis and Notropis chrosomus. Also weather loach, which can become tame. All fully hardy.

killi69 said:
Thanks for the suggestions Gill. Did you keep threadfin rainbows outdoors all year round?
Click to expand...

Threadfins, I kept them outside in a tank in partial shade for the season, so from may to september. And then brought them inside.
The difference in the males was outstanding. The dominant males finnage became much longer than when kept indoors. And the Lower Jaw Appendage became very large and almost platinum in color. Also the males had dark visible stripes when sparring with subs and flashing to the females. I was lucky at them time to be able to find Red, Yellow and Green finned males circa 2003. Never quite seen them again in these variations.


killi69 said:
From what I remember, people had not been able to keep guppys, platties or barbs outside year round (but had great results during the warmer months).
Click to expand...

Yeah, guppies would need to come inside when the temp starts to drop below 12 celcius - though this does turn off the breeding instinct in the females, so they store what they have for up to 6 months.

Yes these are a dream fish for outdoors in the Uk - a few people on here have them in ponds and they look great. And when they start spawning in the shallows they certainly are a striking colour.
Weather Loaches are great for ponds and they can get quite gargantuan, Have rehomed a few while at MA findern.

Its really is a shame that China Sharks are not more readily sold for the UK. Such stunning fish in large groups - Oliver knott has recently done a temperate tank with 20+ of these. And they certainly look good with all the differing colour variations. I have kept them myself briefly many years ago prior to realising they needed a licence and returning them to W.O.W Rugby. Though I did find that weather loaches did not like them, and ought alot.
Meander, Titans, Sea of Ferns, Counted Sorrows
Experimentation is the key to growth - Pardeep
You must log in or register to reply here.
Share:
Facebook Twitter Reddit Pinterest Tumblr WhatsApp Email Share Link