tam said:
What level of accuracy do you maintain without doing all that? I recently recalibrated ours after about a year (having used it a couple of times a month and just stored it with the lid on) and it was 0.1 out.
Click to expand...

Because pH is a log scale if you have a strongly alkaline, or strongly acid, solution of high ionic strength you will always get about the right value.

As long as the membrane hasn't dried out the meter should still be all right.

Our tap water is fully saturated with calcium carbonate and about 18dKH and 700 microS. It will always measure somewhere between pH7.8 and pH8.2, it doesn't really matter whether the meter is calibrated or not.

The problems come when you start to measure water (a weak solution with H2O as a solvent) with less solutes, or with a more even balance of acids and bases.

wolfewill said:
I use Sylvania to assist me with algae outbreaks
Click to expand...

Salvinia? it works really well. In terms of its growth it is just as good as Pistia or Limnobium, and has been used extensively in tropical regions for water treatment. I <"prefer Limnobium"> for the Duckweed index, just because it is greener plant and it makes it easier to pick up changes of leaf colour.

wolfewill said:
And here are some pics that were on my web site when it was in operation.
Click to expand...

sciencefiction said:
What do salt water creatures have to do with fresh water....Even the


And how do you think would that be replicated in fresh water set ups....taking into consideration all the fundamental differences between fresh watet and salt water....? Anaerobic denitrification....rising TDS....nitrite toxicity, etc....
Click to expand...

I don't know... I promise I'd share if I did... but how does an ecosystem pond work? Does it work any different if it is an indoors ecosystem pond?

kadoxu said:
I don't know... I promise I'd share if I did... but how does an ecosystem pond work? Does it work any
different if it is an indoors ecosystem pond?
Click to expand...

Well, anyone that has expensive fish in a pond would be running it just like a tank but on a larger scale and more equipment, taking into account that the more water volume will help. Water changes are as essential as if it were a fish tank. As for natural lakes, I think they rely on ground water as much as they rely on rain water, so water changes are done naturally....In rivers we know what happens, we can never much the scale of "water change" a river gets..

sciencefiction said:
...Personally, I am more interested in the fish side of things and their history in relation to the set ups and maintenance schedule related to them.
Click to expand...

Ok. That's going to be harder to do. I have one shot of my beloved Congo Tetras from Feb 19, 2012 while they were in my 90 g tank, and another shot of the same fish in the larger tank on Jan 4 2017. They started to die off last summer (2017). I'm going to try to put them in chronological order. Unfortunately the date stamp was not on the second one. People always commented on these as being the biggest and most colourful Congos they'd seen. They lasted a long time. Since I'm plant oriented, the fish are usually secondary, but my Bleeding Hearts were huge and they lasted for a long time as well before I sold them, my Lemon tetras breed spontaneously. I don't think this dosing strategy has any negative impacts on fish health. 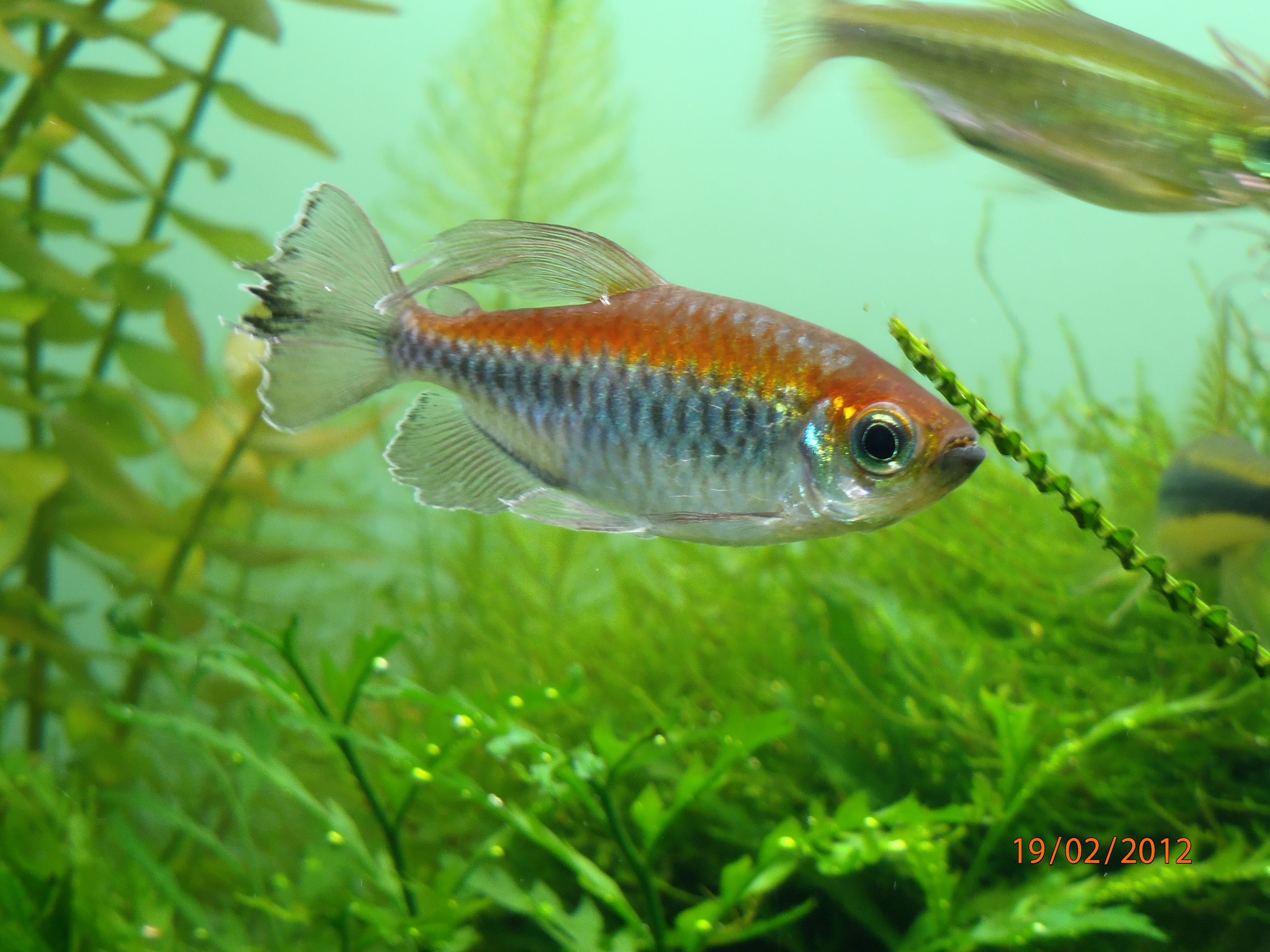 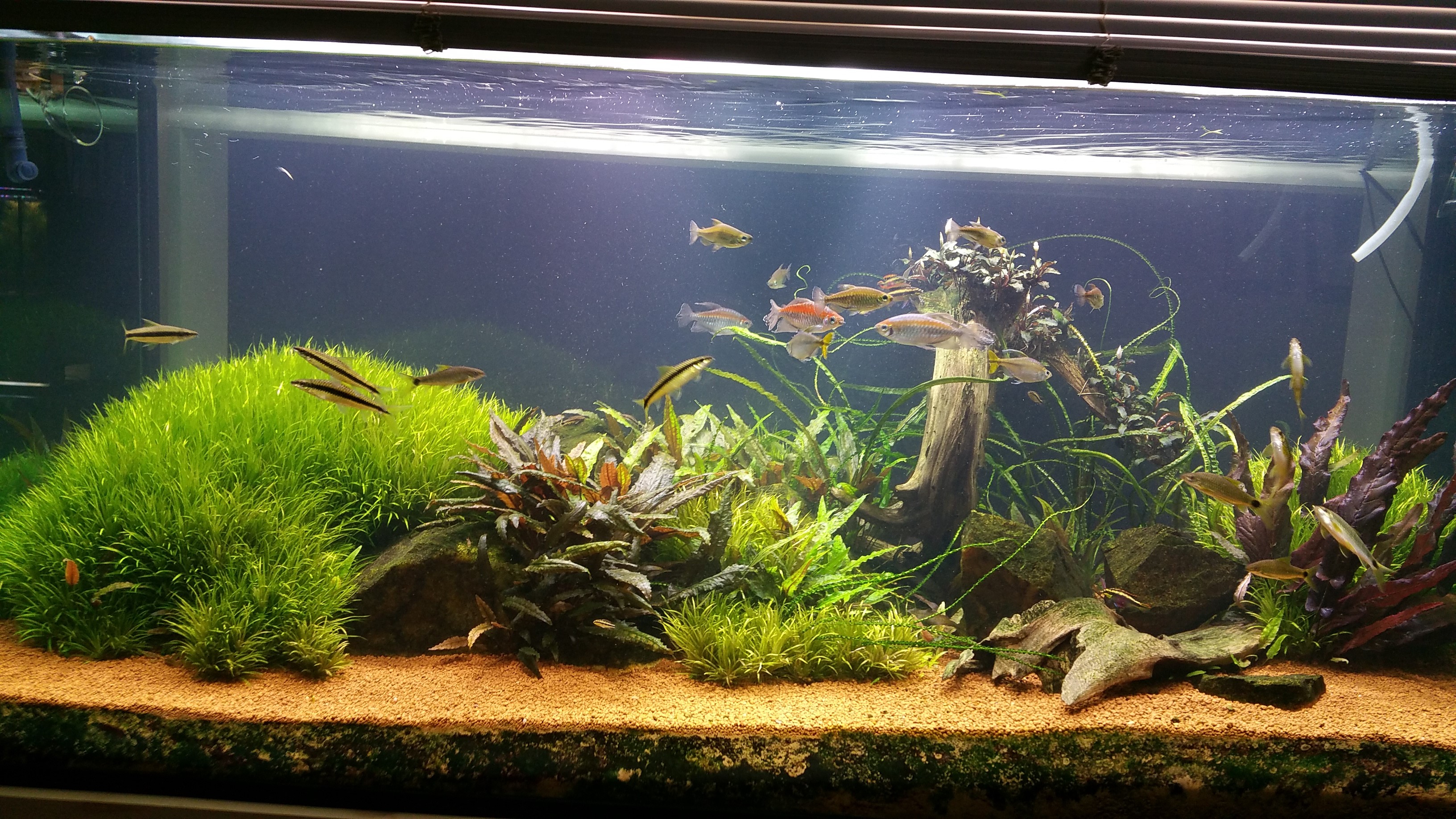 sciencefiction said:
What do salt water creatures have to do with fresh water....Even the...... And how do you think would that be replicated in fresh water set ups....taking into consideration all the fundamental differences between fresh watet and salt water....? Anaerobic denitrification....rising TDS....nitrite toxicity, etc....
Click to expand...

If I may interject here: I thing what kadoxu was trying to say was that in the salt water side, testing is necessary despite the test kit anomalies, and they have done quite well. But perhaps I'm reading something in that's not there?.... Comments kadoxu?

wolfewill said:
I thing what kadoxu was trying to say was that in the salt water side, testing is necessary despite the test kit anomalies, and they have done quite well.
Click to expand...

I am personally not against testing. I just find it unnecessary in my scenario. I think there are fish keepers that like to be in control and those that don't. I am a proponent of large regular water changes. If they're done, testing becomes irrelevant.

You have probably all read the story of Hanako the koi carp that lived over 200 years.....

Some quotes from practical fish keeping on the story:

"I took off two scales from different parts of her body by using a strong tweezers. The scales were examined by Professor Masayoshi Hiro, D.Sc., Laboratory of Domestic Science, Nagoya Women's College.

"It took two months for him to acquire a satisfactory result. Using the light microscope, he photographed every part of the scales. It seems he took a great deal of trouble. When it was certain beyond doubt that the carp was 215 years old, the two of us exchanged a look of delightful surprise.

Then I had the professor examine the remaining five carp in the same pond, three white and two black ones. The examination took one year, and it was found out that three were respectively 168, 153 and 149 years old, and the remaining two were both 139 years old.

"A stream of limpid water never ceases to flow all the year round. It is this water that flows into the pond which Hanako lives and which was carefully constructed with stones in former days. Besides that, pure water trickled from the foot of the mountain streams close by into the pond, making the favourable conditions still more favourable. The pond cannot be called large, only being about five metres square."

Let's look back at some history: PMDD:

Frankly PPS is blatantly plagerizing PMDD.
"Edward" never once acknowledged anything he took and posted to the original authors of PMDD.
PMDD predates PPS by 8 years.
I know both authors for PMDD as well as the PPS folks whom we have never seen a last name nor their own tanks.

PMDD suggested using test kits to balance, but did not forgo the water changes at 25% weekly or thereabouts to minimize any build up.
You can see the infinite series used for dilution with partial water changes using Fe as the nutrient in question.

EI is about 90-95% PMDD. It's more a simplification of PMDD using water changes, I fully understand that the hobby is more an issue of human behavior and social issues rather than "Science" or water test kits.
Getting folks to test is a rough arugment to make. Some will do it for a little while, then stop. Other's will test only when there's an issue, not when there is a good success. Actually they should do the opposite. Think about that one for awhile.

Non CO2 method use no water changes as the rule, but many fail as they only treat advice like a cafeteria, they pick only what they WANT and leave behind all the caveats and good advice they do not.
Same with testing.
And same with doing frequent water changes, but that's easier for most than testing consisently.

And my non CO2 tanks, as well others who scape with them at higher level rival most CO2 enriched tanks. So why do water changes or add CO2? CO2 is poison right?
Not good for fish or shrimp etc? If you want less work/labor, input, then that seems like a better option. No testing other than TDS if you want.

I made this point to Edward, God, 12 years ago? Ecology, waste, balance, all that was mere rubbish I guess.

Dosing? Why not just use ADA aqua soil? Add a tiny bit to the water column, replace the soil once a year?
No test and the plants do great. You do water changes in the start, but after 1-2 months, none are done typically.
Or you can do EI. Or a modified version thereof.

EI serves a good purpose to make the aquarist tank independent of fertilizers. Thus the aquarist can then focus on mastery of CO2, argubly the most important factor if the gas is used for anyone worth their spit.
If you can do that, and you can do a non CO2 tank, everything else.............. falls somwhere in between.

BTW, I have 4 tanks that get CO2 gas, and no water changes, they also grow some of the touchinest plants I am aware of. While not "scaped", I see no reason why they cannot be.
So I use several methods, as I have several goals, but generally, if I scape and tend a tank more, I want it to look its best, thus I am much more likely to do frequent water changes and keep it cleaner.

So if you are honest about learning more, they perhaps learning each method is more the game plan, not just one. They all do the same things and add the same things, just at different rates. So they are NOT THAT different at the end of the day.
People's habits? Those are the real evil, hehe.

plantbrain said:
BTW, I have 4 tanks that get CO2 gas, and no water changes, they also grow some of the touchinest plants I am aware of. While not "scaped", I see no reason why they cannot be.
Click to expand...

Do you do any testing on these tanks? On any tanks?
You must log in or register to reply here.
Similar threads
new tank water changes
Water changes with floating plants?
Water changes, HMA Filters and dechlorinators . . .
Water Changes and Thermometers
What is in water changes
Soft water, plants and CO2 (or not)?
Share:
Facebook Twitter Reddit Pinterest Tumblr WhatsApp Email Link