I bought crs as my first shrimp. They did fine. Didn't know what I was doing or how to keep them but they survived numerous tank changes and everything but a bad choice of filter resulting in one being split into two :/ guess I was just lucky. Good luck

why not have the shrimp you really want ? Just use a different stone.
darren reserves the right to go off-topic

Setting up a tank is a near magical moment. Putting together various parts of a puzzle which slip seamlessly together.

This, however, was hellish.

So after filling up the tank and turning the filter on, I found that the flow was beyond weak. So I left it for several minutes and upon my return, there was a phenomenal amount of water everywhere.

After a good solid hour of tinkering and leaks, I finally managed to get it water tight, but I'm not quite sure how.

Then went to attach the Reg and release the CO2 only to find that the Solenoid was broken and was adamant not to let any gas through.

Various other problems such as continuous flickering of the bulbs ect. But I will not continue to complain.

ALL of the issues are resolved now and the tank is running perfectly. Got another Reg from Philip which is perfect and its all going well.

Its become apparent that CRS is no longer a possibility with this setup, but that's ok because there are plenty of other shrimp that would be much more suited. Rili Shrimp are a definite possibility among others but the main thing I really want is a small shrimp to help give the scape as much scale as possible. 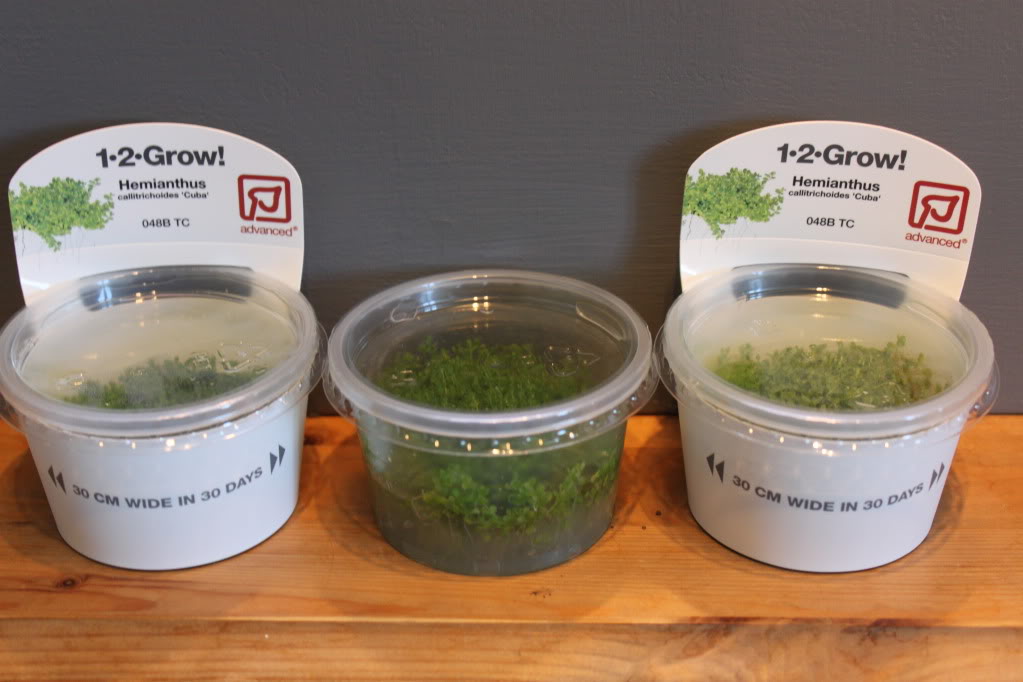 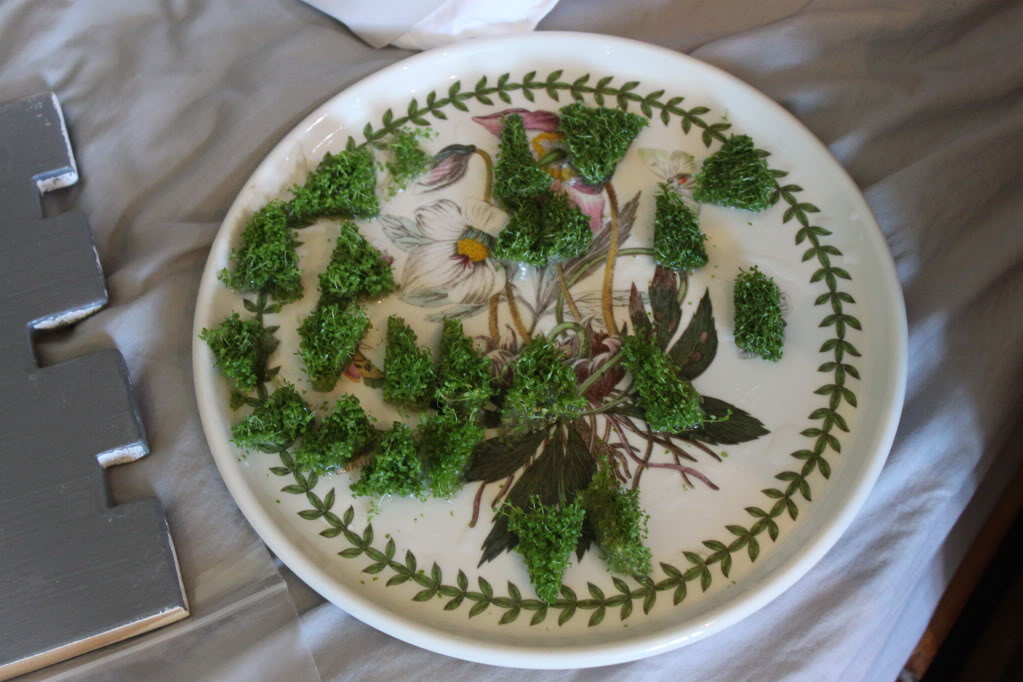 Was told afterwards that it is much easier to plant when the Aquasoil is wet......ah well!! 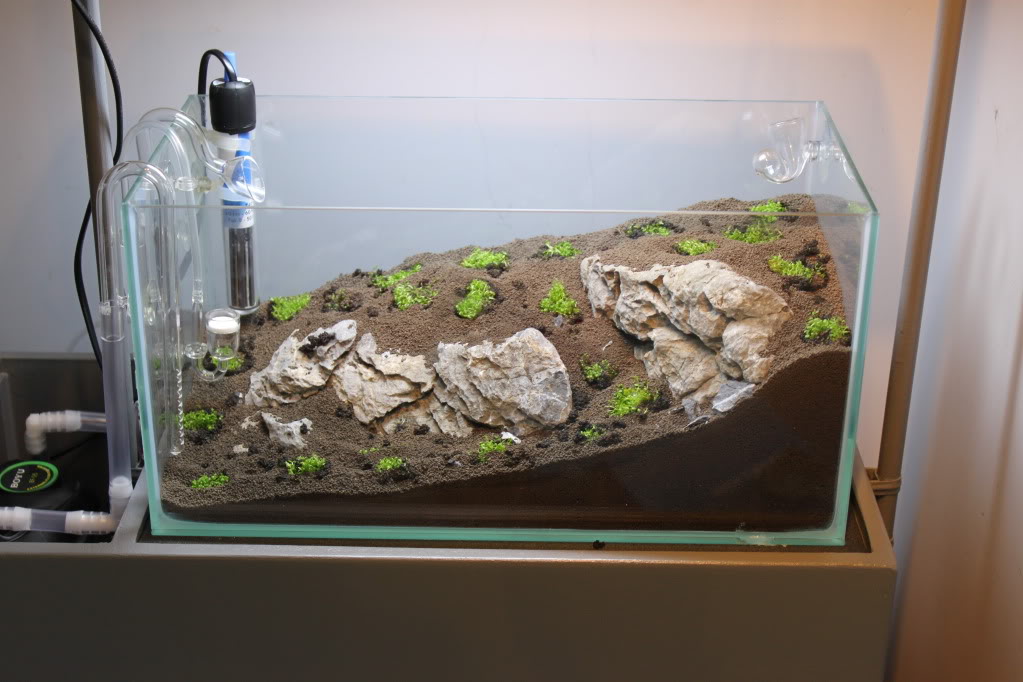 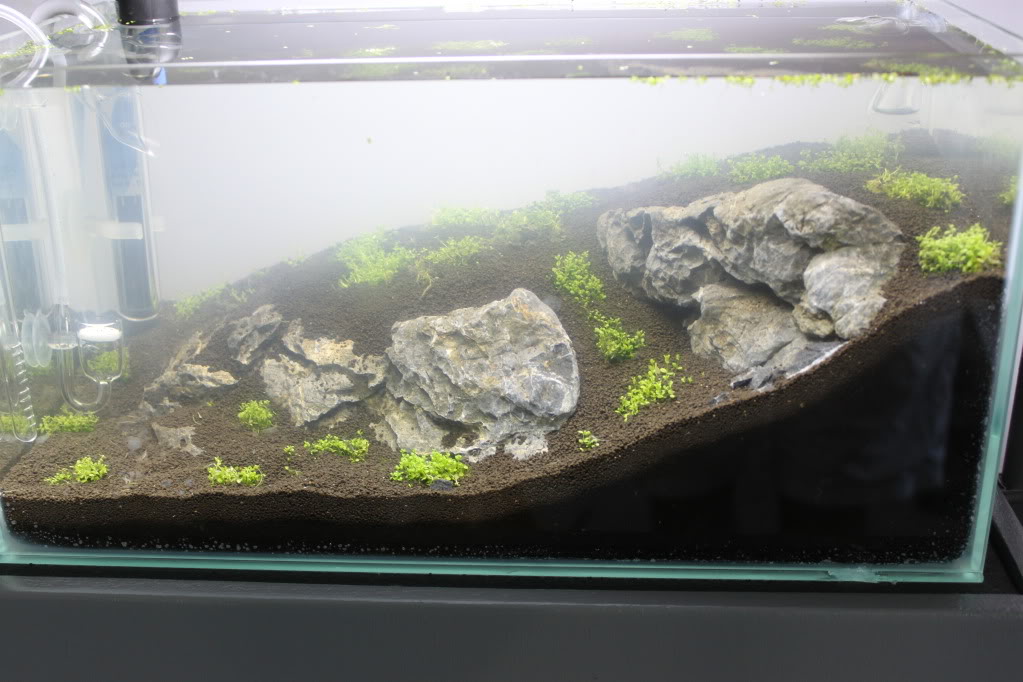 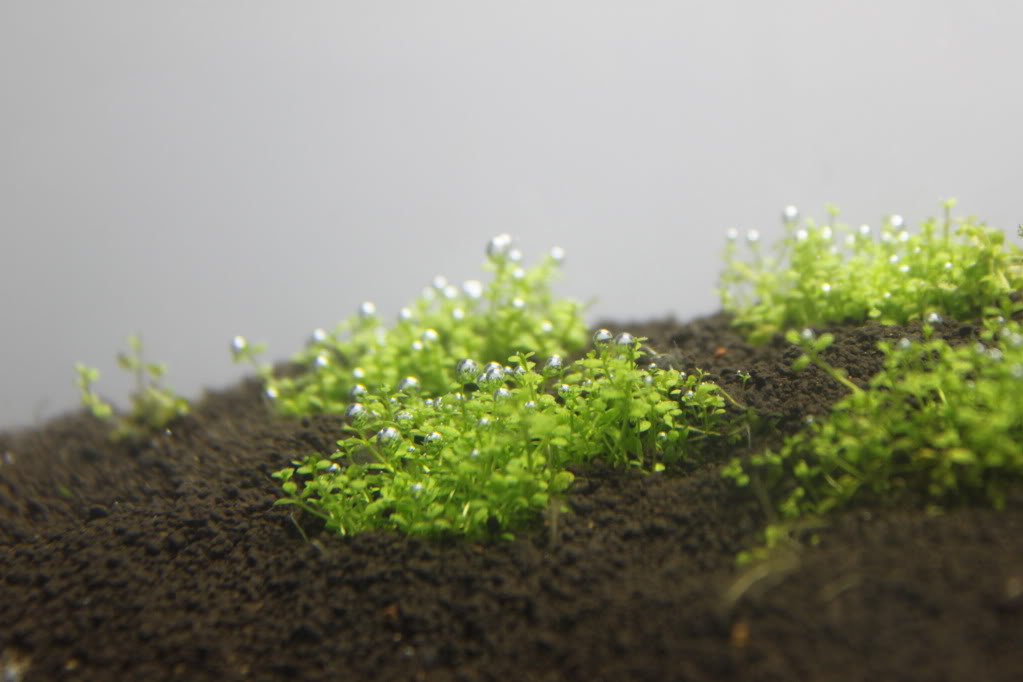 And the Tank today.. 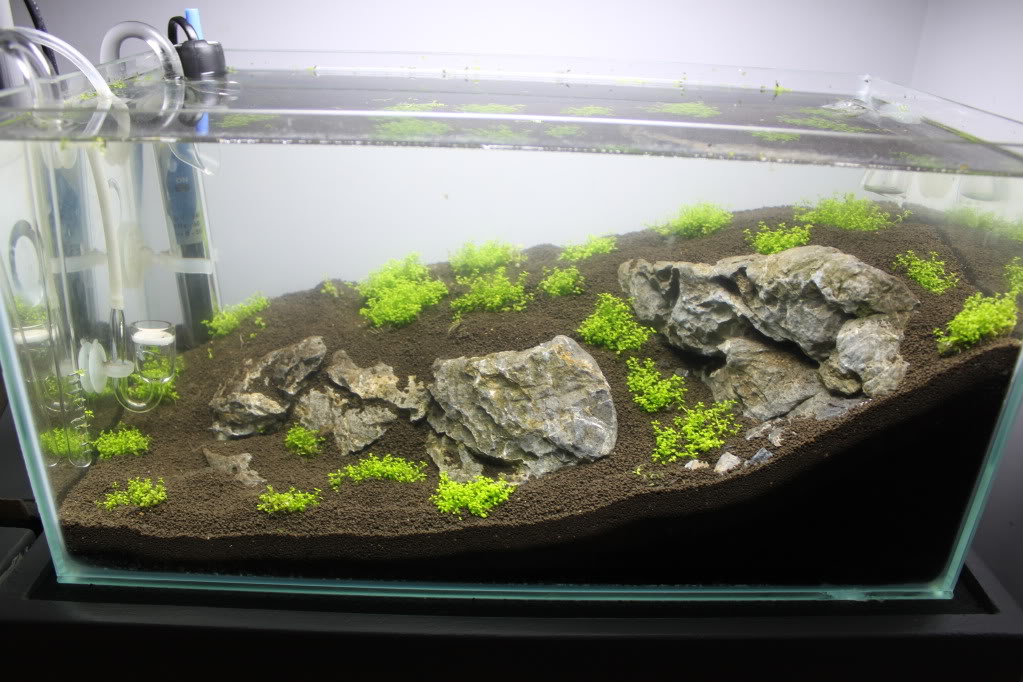 Looks sweet, im sure you'll find that your substrate will flatten out soon with it being banked so high :S Now you have the wait for it all to fill in! Good work keep it up

It has got quite a gradient on it!!! It was something that I wanted to experiment with, and hopefully when the plants cover more of the substrate, there wont be so obvious, failing that it can always be lowered! I do expect it to sink some more though as there are gaps underneath the rocks where I don't think the substrate has filled into yet.
My 240l re-scape "Reach"

Have just moved house, and unfortunately during the move, the slope did slip down. It was unrealistic to presume that the tank could be transported without any substrate movement, so I have completely changed it.

I have also had problems with the filter and it has completely broken now, and is streaming water from the electricity port!!!

Have ordered one of the Dennerle Nano External Skim Filter.
My 240l re-scape "Reach"

bummer mate tank was looking good bad news about the filter just set one up on my 12 ltr nano did you make your mind up about shrimp yet ? think i should get a backup filter on standby get the pics up

New filter is up and running! Is dead quiet and looks solid.

All Pond Solutions won't refund me for the old filter but have offered to replace it if anybody wants to get their hands on it?
My 240l re-scape "Reach"

Ill have it for free

Looks great. Decided on what shrimp to use?
Rebirth of two 30cm cube tanks

Quite a lot has changed since the summer. Have been incredibly busy since getting back to uni and as a result I haven't been keeping up with UKAPS.

The tank layout went under change as that enormous slope was un-practical and just kept slipping so this is the new layout after I planted it back up. 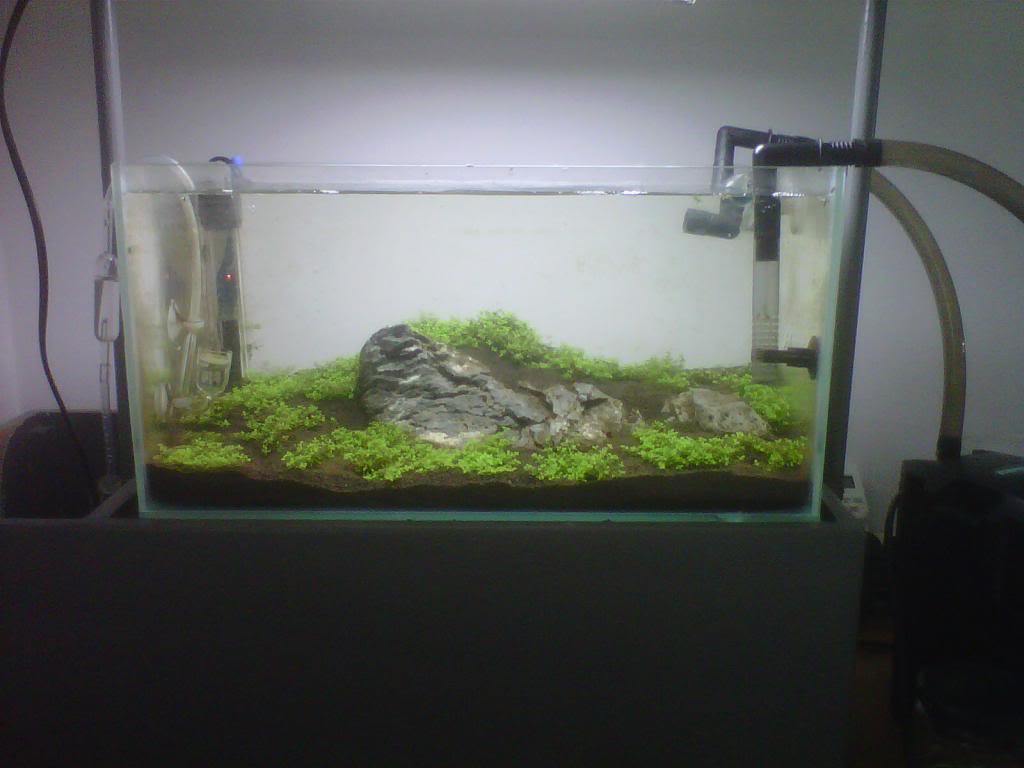 I may have let it overgrow slightly... 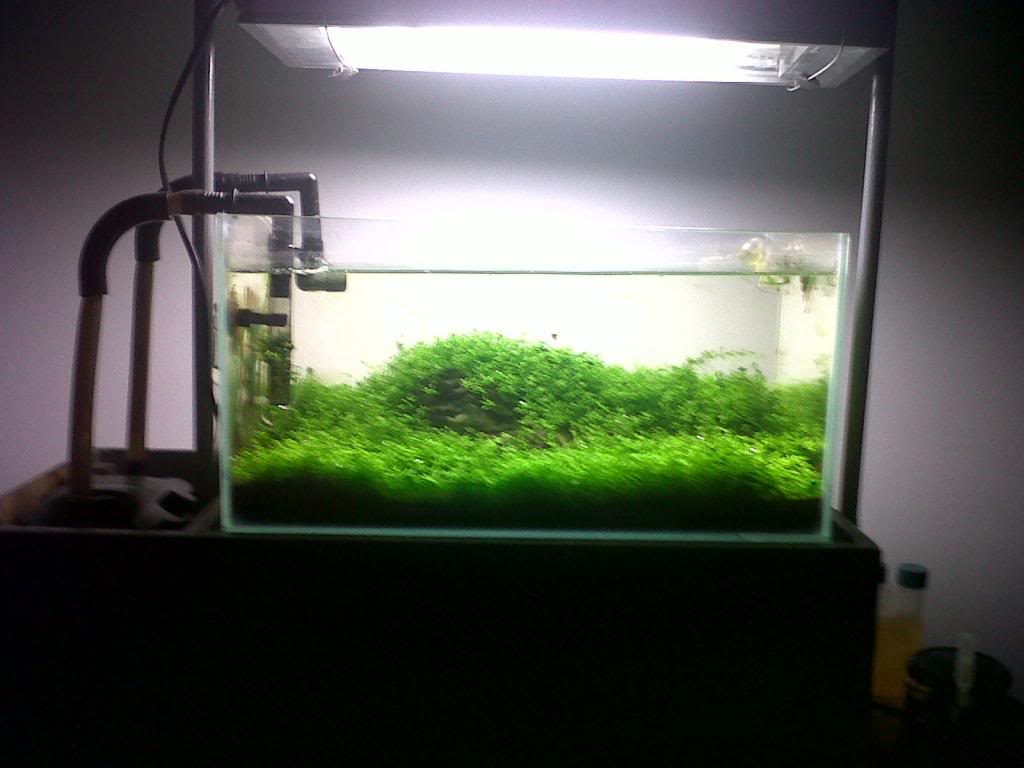 But after a nice trimming session... 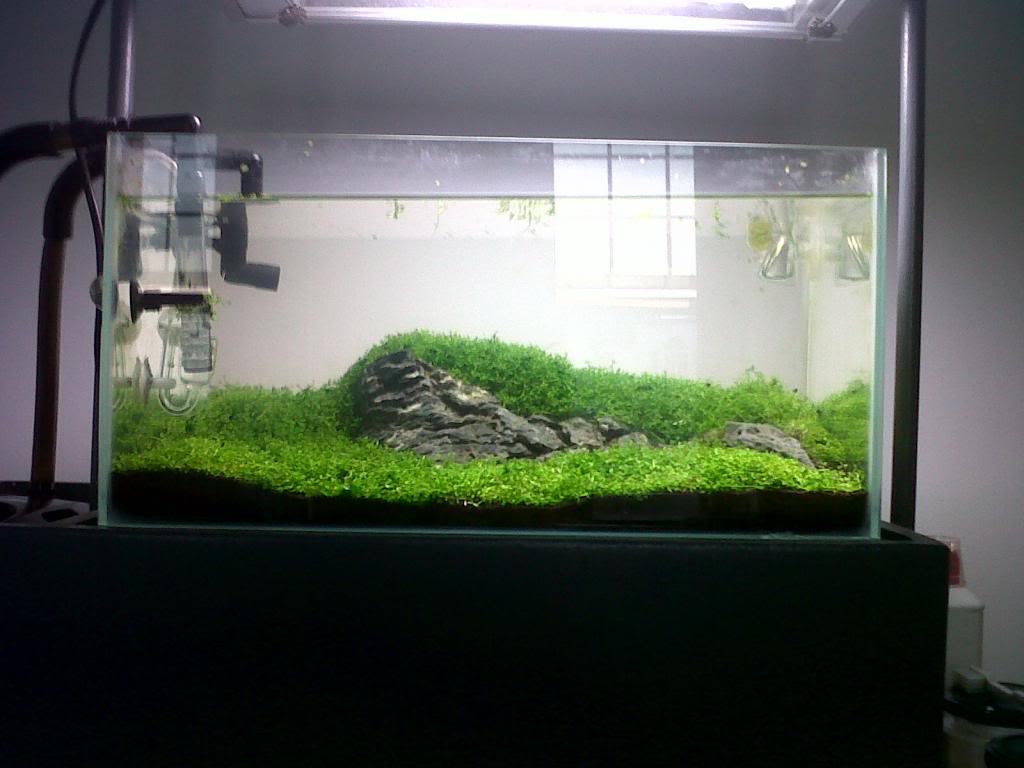 Had a chat with a few friends and decided to try out the CRS who went in a few weeks back and they are loving it! Very happy and pretty little shrimp. Only three of them at the moment, as it was a bit of a trial run but plan to put more in.

Sorry for the bad pictures as I'm without a decent camera at the moment, but will hopefully borrow a friends and take some with the shrimp soon!

I am also considering taking out the HC and planing some mini Hair Grass just to keep it fun. If anyone has experience with this plant; please let me know as I think it could be potentially quite fun.

Why not rescale completely and go for a all together different style? Tons of moss and a shrimo

Have replaced the HC with mini HG and added 6 Pheonix Rasboras. 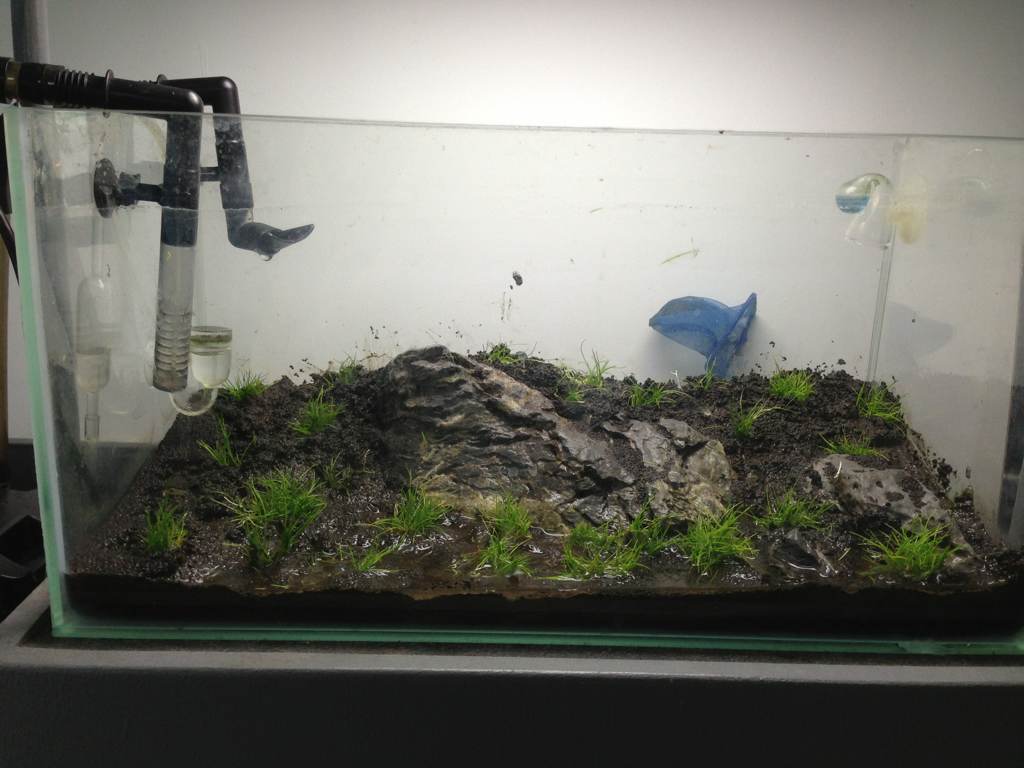 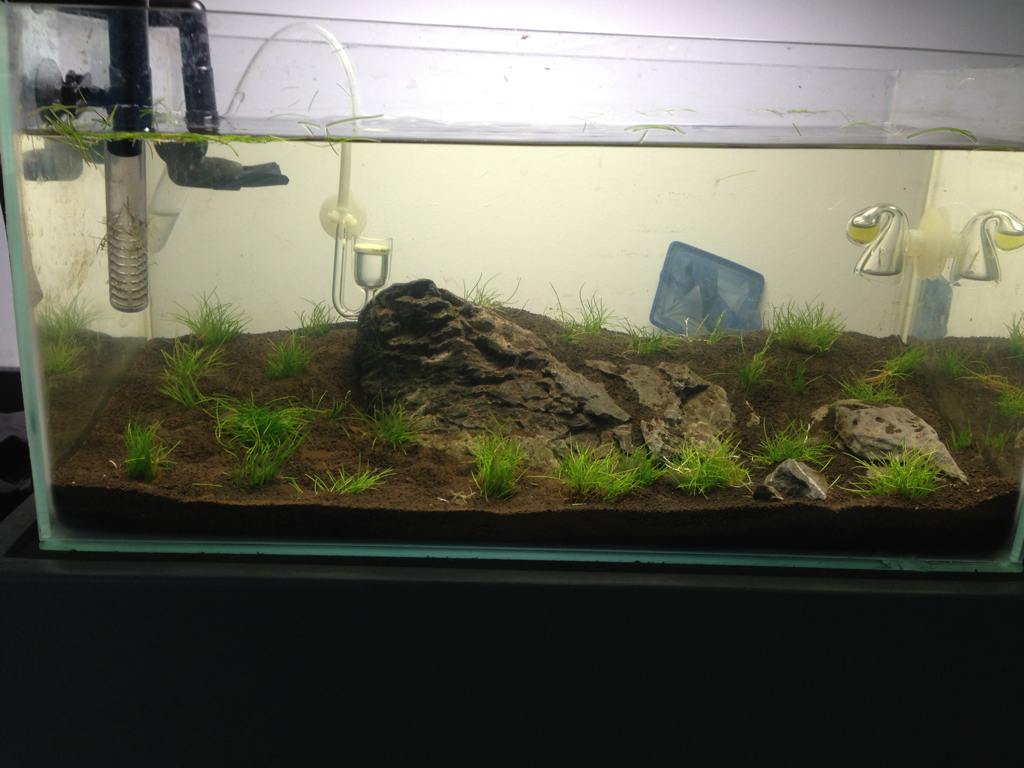 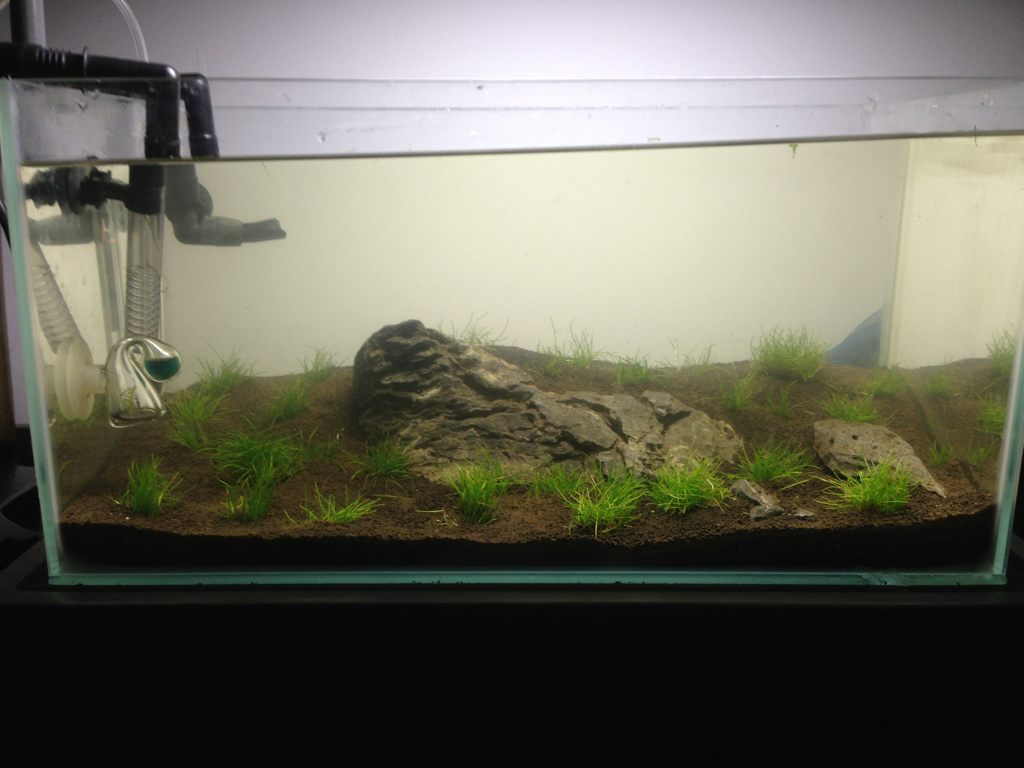 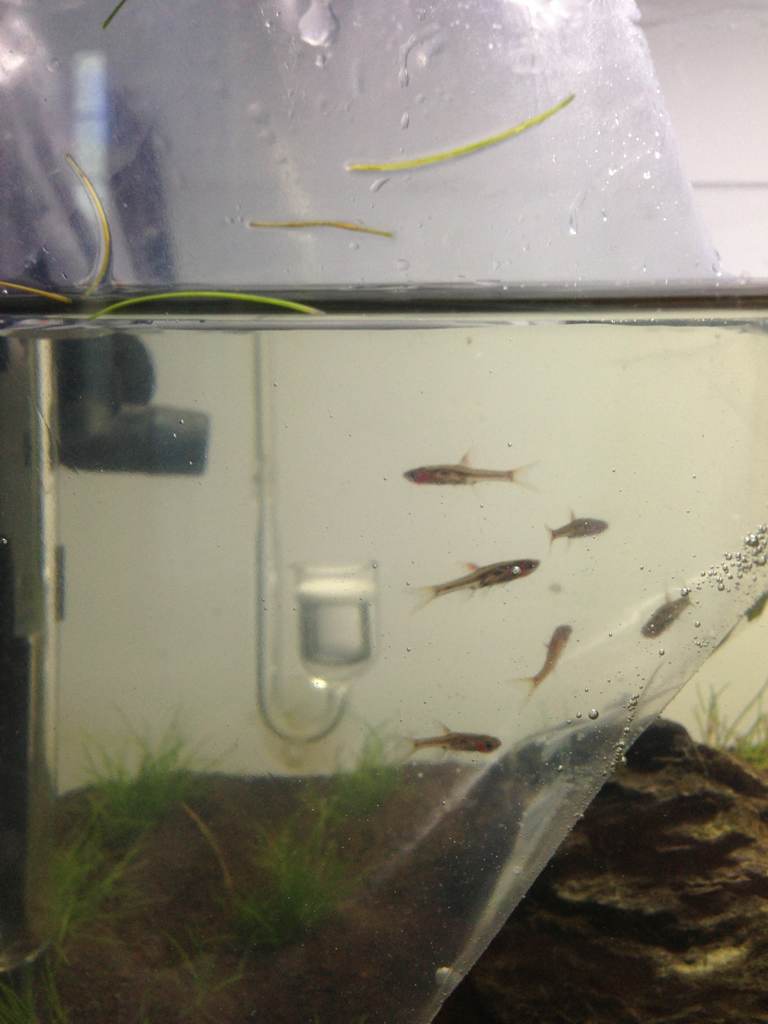 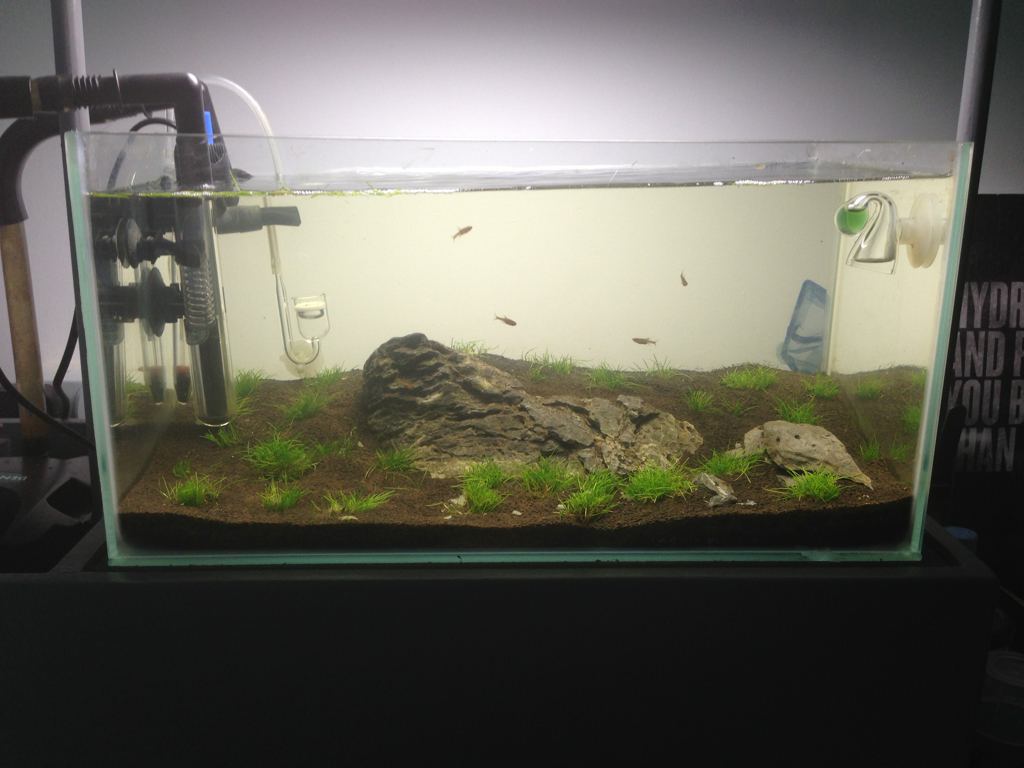 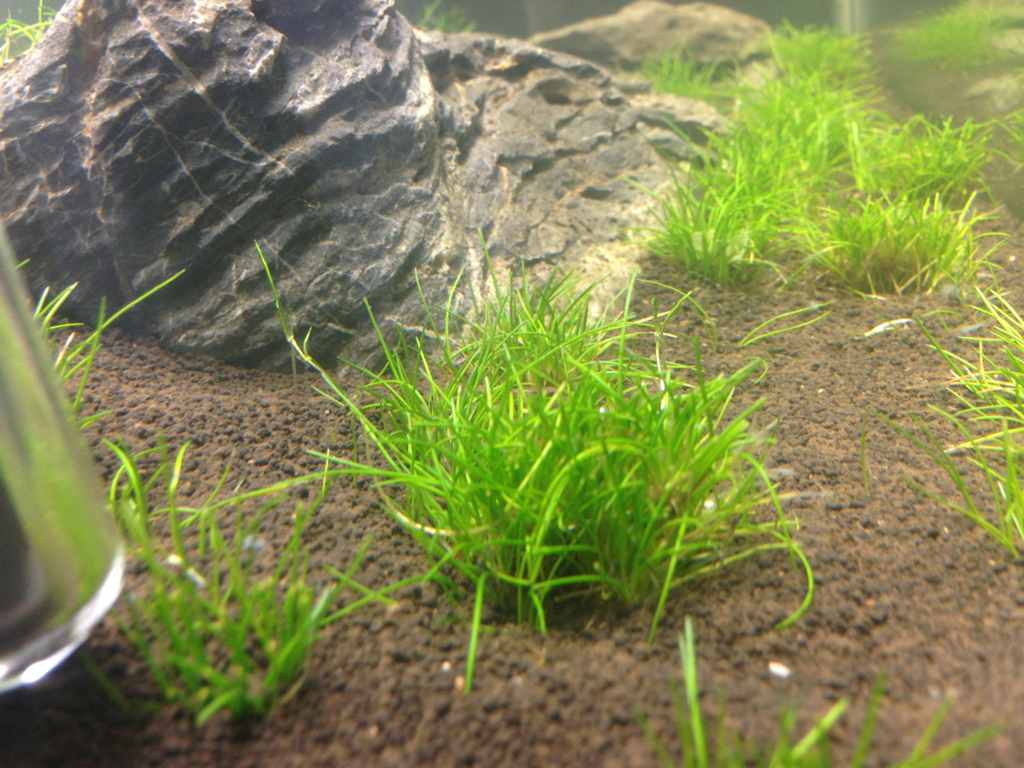 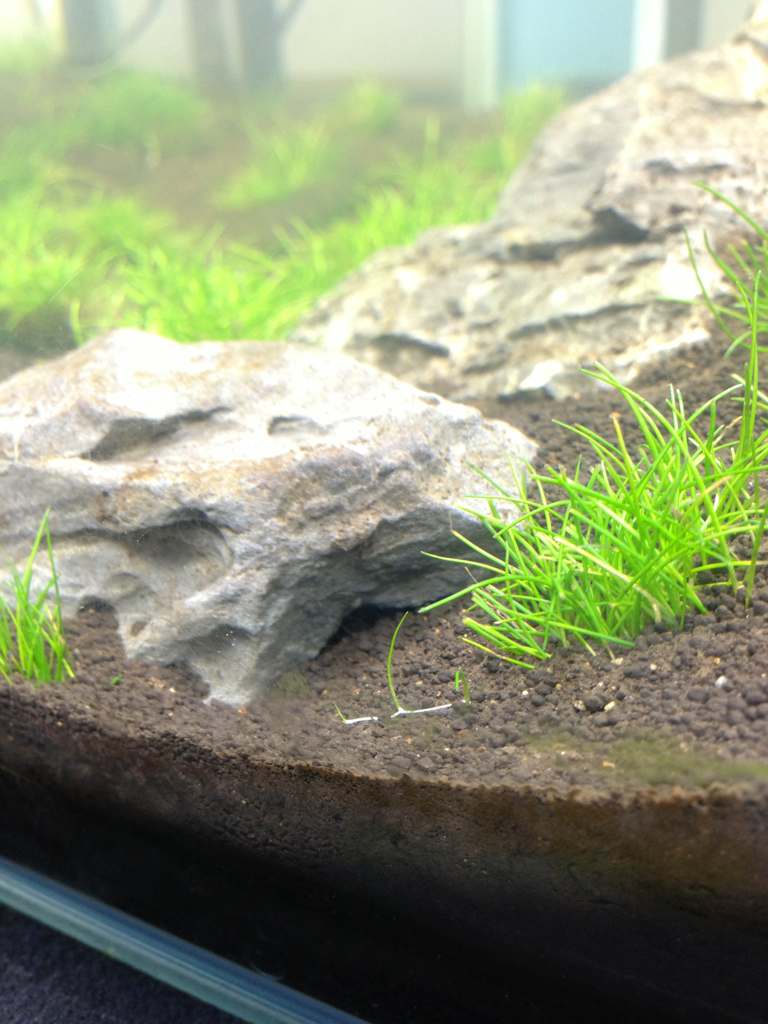 Also really like the idea of the moss paste but I wouldn't know how to do it. Can any one help me out with some instructions/directions?
My 240l re-scape "Reach"

Hi ed have a read through George farmers latest journal he's used the yoghurt method to great effect and details it there.
About time 90x45x45
MiniMal / few scapes in one place
Low tech

Thanks Tim but I think it's necessary to grow it out of water for a few weeks which unfortunately isn't an option
Bit of a technical update as well.

Had to drop the lighting as algae starting jumping up! Nightmare. I didn't think that the HG was growing well enough so I pulled a large clump out to split it and it there were stupid amounts if runners coming off it. This mini HG grows in different way than my experience with the dwarf variety. Seems to me that its runners tend to go over the surface of the substrate sometimes? Anyone had any experience with this plant and would like to throw some hints at me?? If so what methods did you use and how quickly did it carpet??

Ed's Nano 17l CRS Tank
You must log in or register to reply here.
Similar threads