Well I thought as Ive finely got got my tank I thought id start a diary of my progress so far. Thought it might give people a few ideas and hopefully ill pick some up along the way. I was originaly going to get a juwel rio 240 but I went to watermarque taunton to pick up my 3d backgroung and they had the Eheim for Â£250 which was a bargain and probly a better quality tank.

So here it is when it came last week after I cleaned it and filled it up to check for leaks. 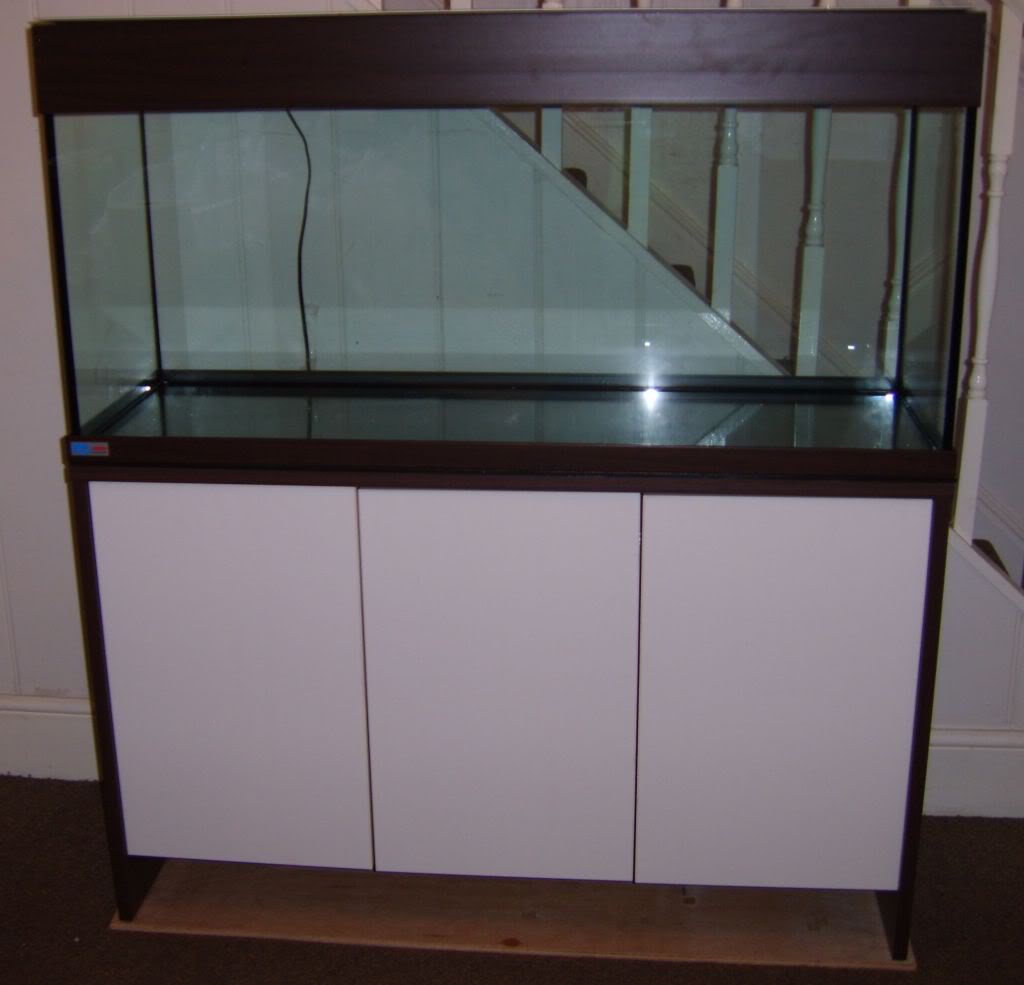 Then I thought Id make a start on the background the one I chose is a back to nature aquaterra slimline red genisis. First i measured up and trimmed the smallest section just incase i screwed it up. You have to go slow and cut along the same line several times befor it goes all the way. 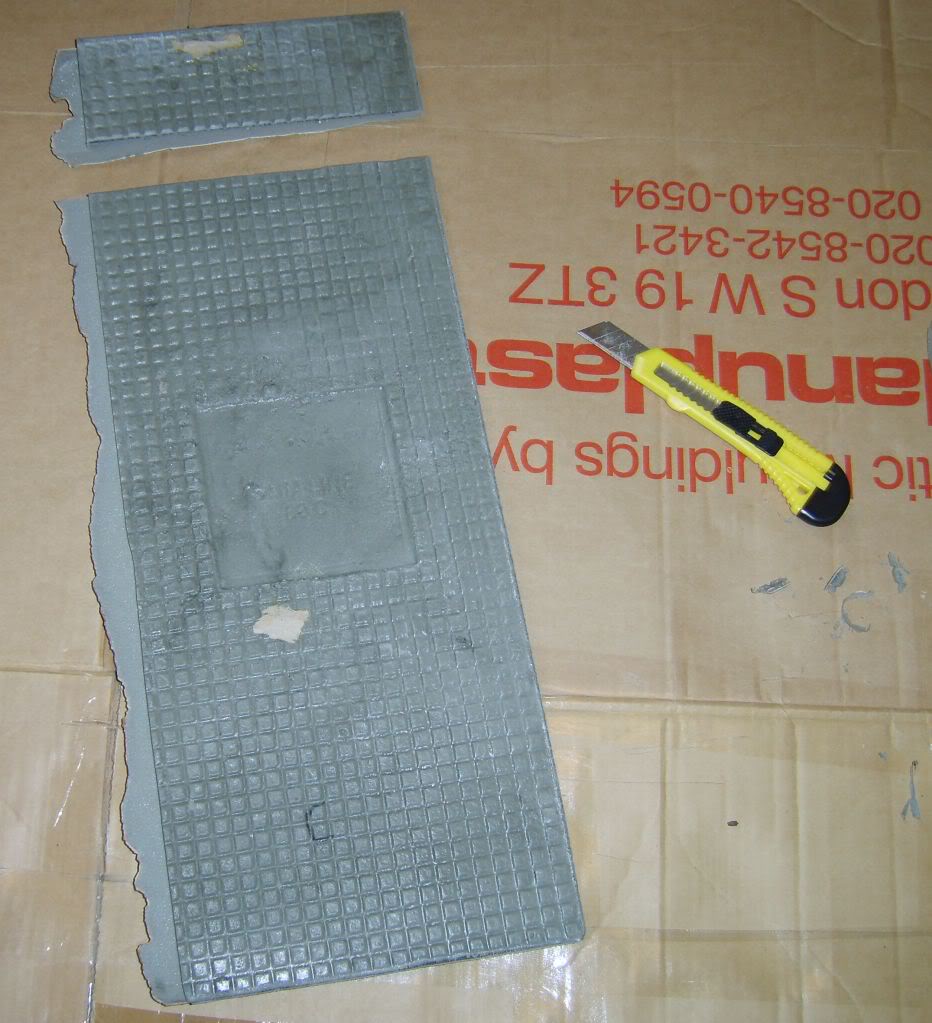 Then i test fitted it to check the length which was fine suprisingly lol. Then you have to trim off the outside edge overlap (which is used for joining each panel) so it will butt up to the glass. Also you need to cut the outer back and bottom edge at an angle and nick the bottom corner to allow for the tanks silicone so it will fit snug.

All 3 pieces trimmed and ready to install

Then came all the silicone I think I used plenty I had 1 arm like popeye come the end ached like hell lol. Anyway back on track, I just layed down a line all around the outside edge adid loads of lines about an inch apart and used black on the outside edges. Like so 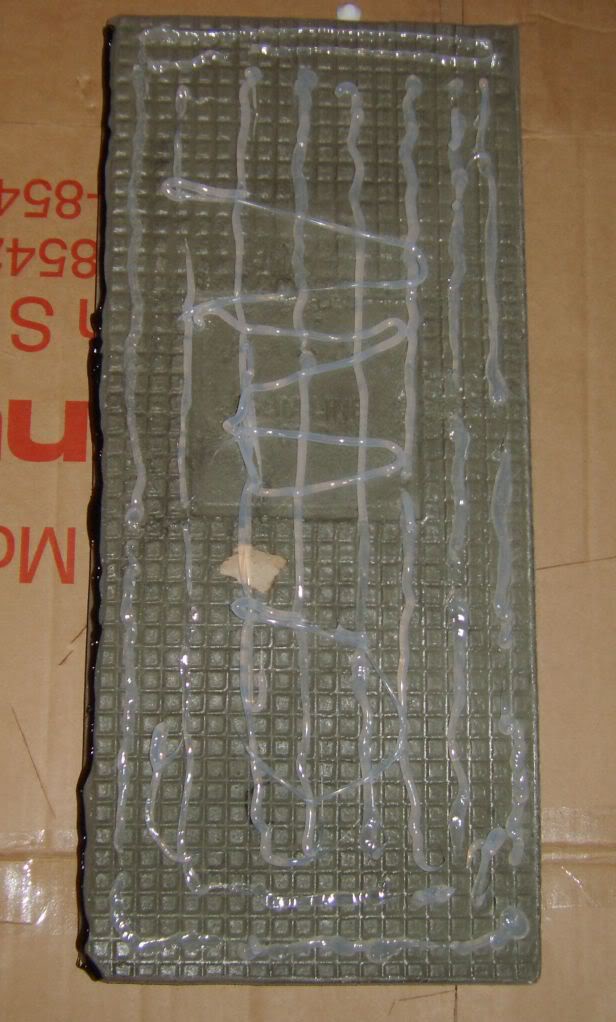 So I put all them in, while they were dying I was still trying to decide wether i should brave it and try to do my custom idea. After alot of uming and aring and buying paint to do the sides i decided to do my custom idea lol. So i started with a small 4 inch wide panel (as its the cheapest) and started tring to work out how to do it. The problem was which i didnt realise till i got home is each panel is a kind of wedge shape so u can join them together properly. Put it this way if id of used it how it was it would sick out and there would be a cut out id have to fill with silicone basicly looking ****. I should of taken a pic so you could see you can kind of see it in pic 2 where its shaped and shaped the cut out is about a cm deep so i need to hack that off and level the whole of the back. Easyer said than done I first cut off 10mm off the bottom (each lil square on the back is 10mm) and trimmed the rest off the length. The reason i cut the bottom to is because theres a thick layer of the resin like on the front which would be a pain when trying to level the back out. So I cut as much as i could with a knife then used a box plane rasp type thing to do the rest. It was alot easyer than i thought and quick. Heres the 2 finished panels a 4 inch and 8 inch 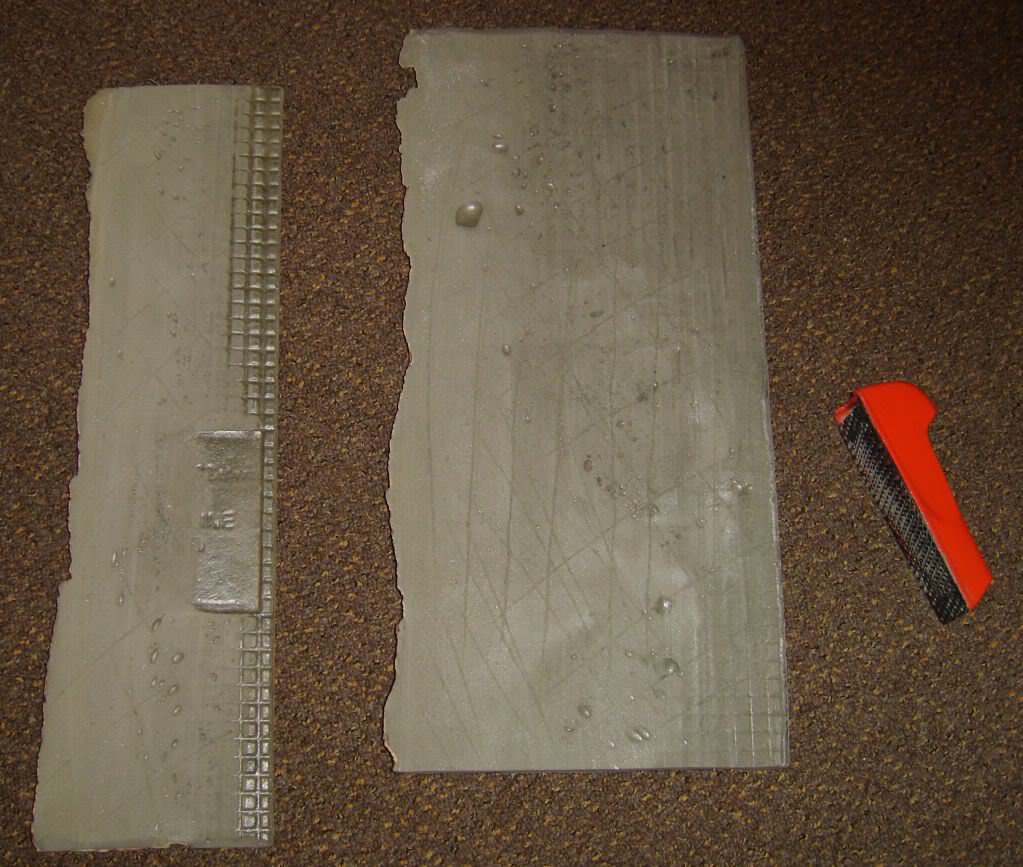 After the back had dried i ran a bead of black round the edges the custom side panels will cover. Probly didnt need to but wanted to make sure its all 100% sealed. Then I stuck the sides and weighed them down with bags of playsand.

So once that was dry i beaded all round the outside edges and top and bottom And personally i think it looks pretty damn good. The only downside is when you stand the tank back up you can see all the silicone holding the background on. Which was easily remided by painting the back and the bits of side covered. I decided to not paint the whole side because i thing it would look odd. I chose wilkos moody blue and did 3 coats 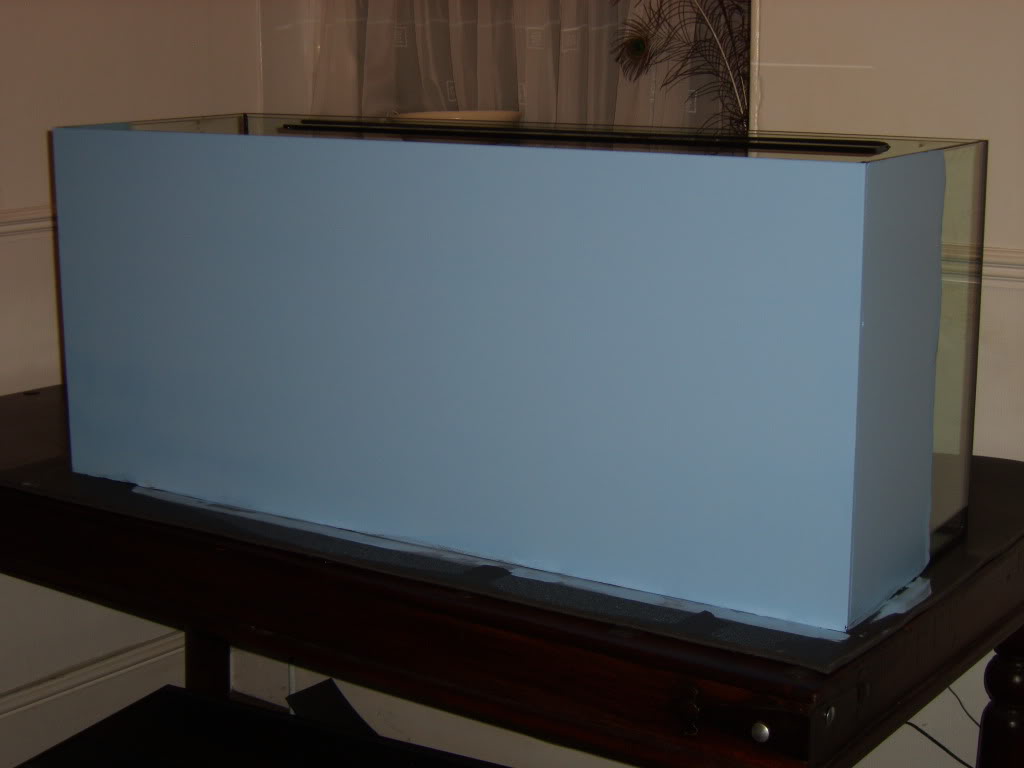 Heres how it looks. 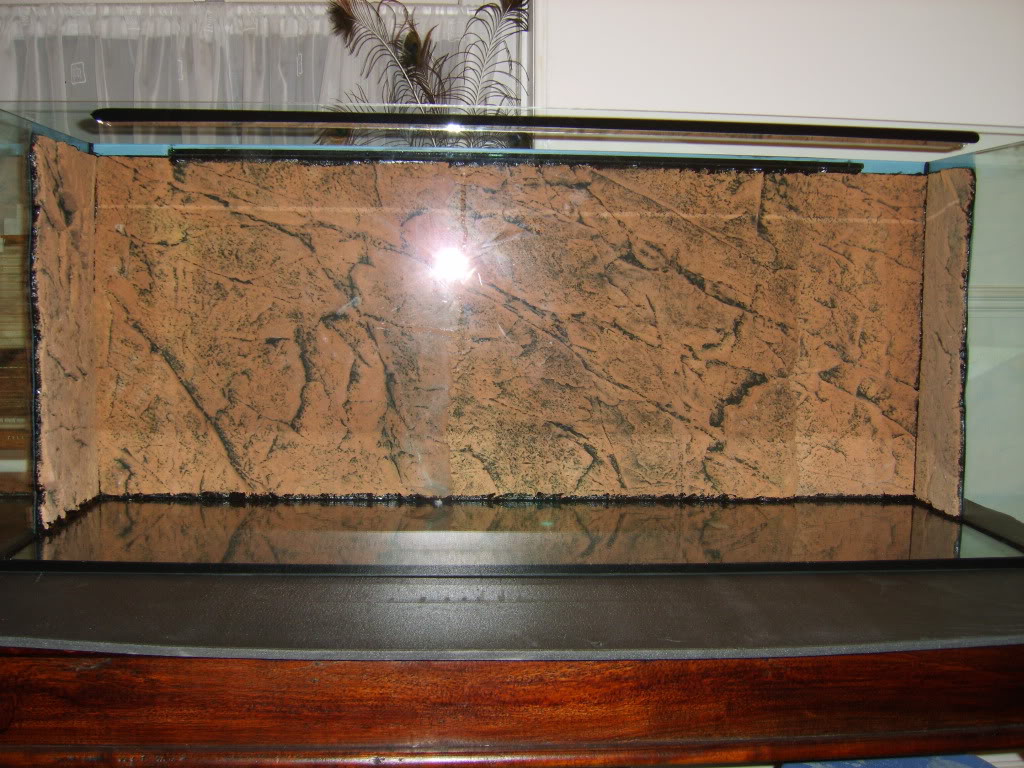 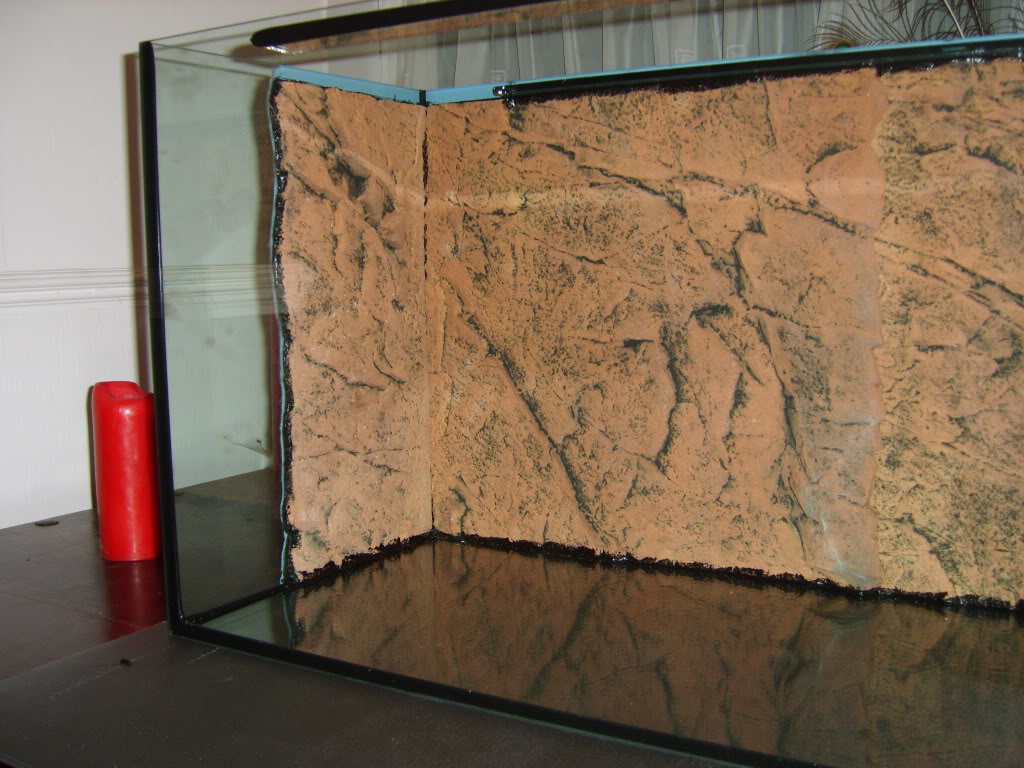 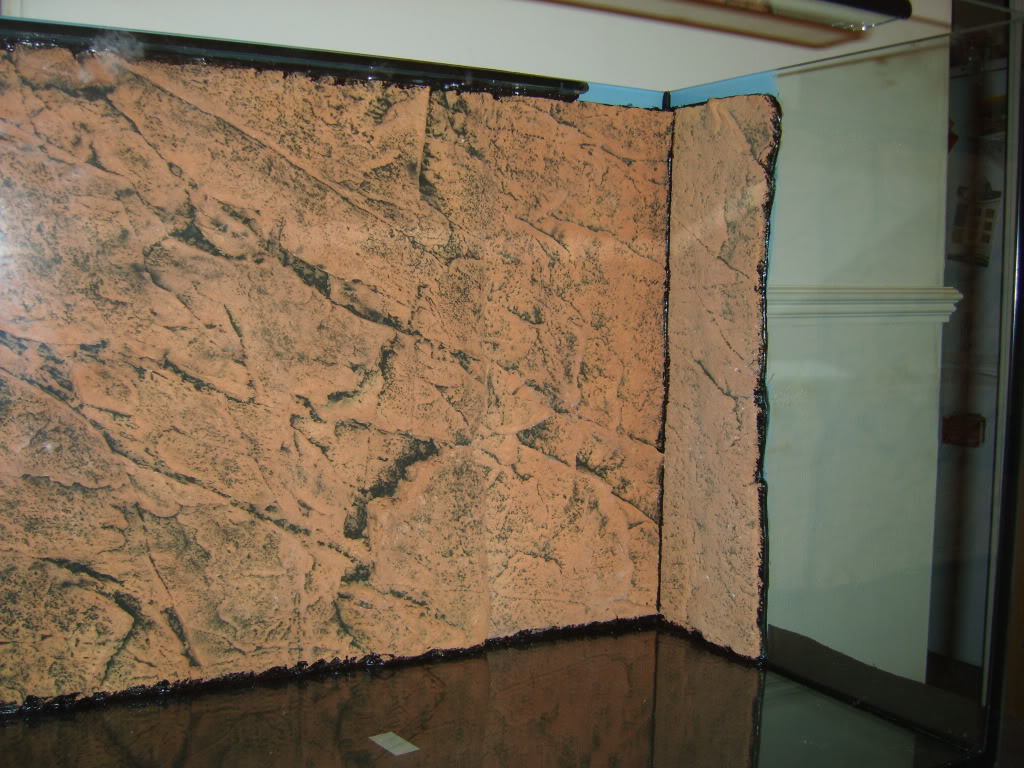 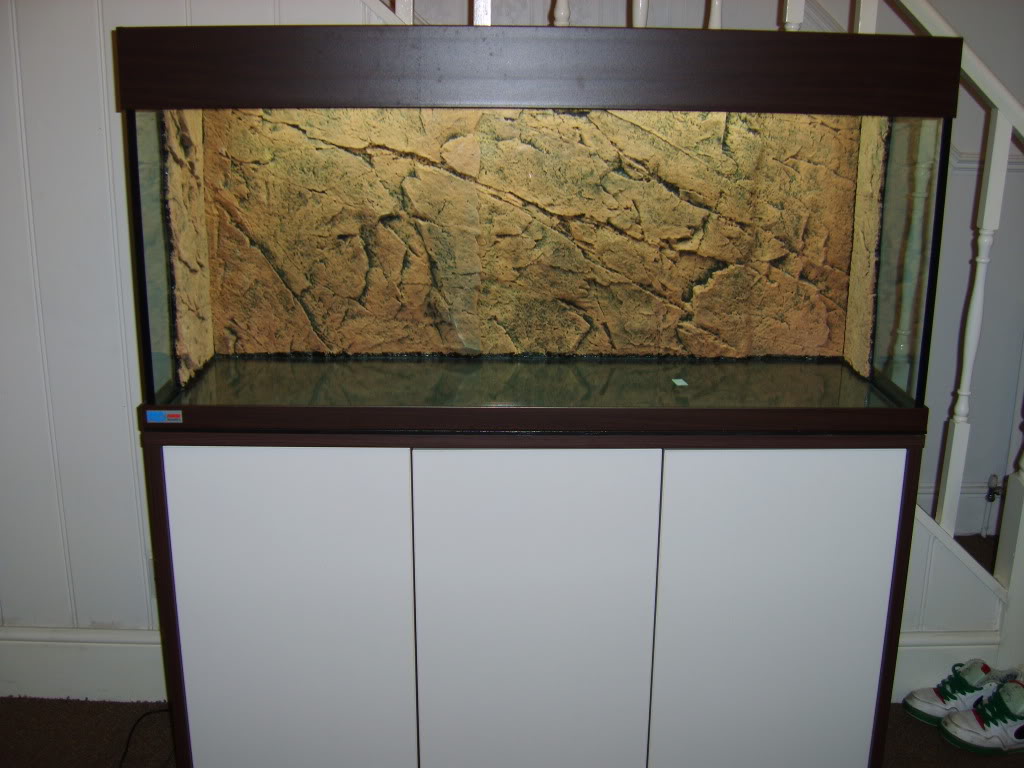 Thats how far I am for now once payday comes i shall order me plants and set up. I have also set up my water storage area in the basement with my HMA 80C (from MJE). Ill get a pic of that tomoz. After lifting one of the 25L jerry cans today i was gonna use to lug hma water to the fish tank ill be investing in a pump lol.

Thats it for now I will update as I go

Sounds like a great start, except I can't see any images yet...

Just a little update the basement water storage area is pretty much finished just waiting to get my waterpump to shift it to upstairs. Ive drilled a 30mm hole through the floor in a cupboard behind my tank ready for the pipe. I underestimated how tough the pad of concrete is there its about 5 inches thick and tough as hell my drill struggled. Ive made an insulated jacket for the water butt out of arctic sleeping bag quilting from work and one for my HMA. It doesnt realy get very cold down there because there is heating pipes right under the floor boards but is worth doing just in case. 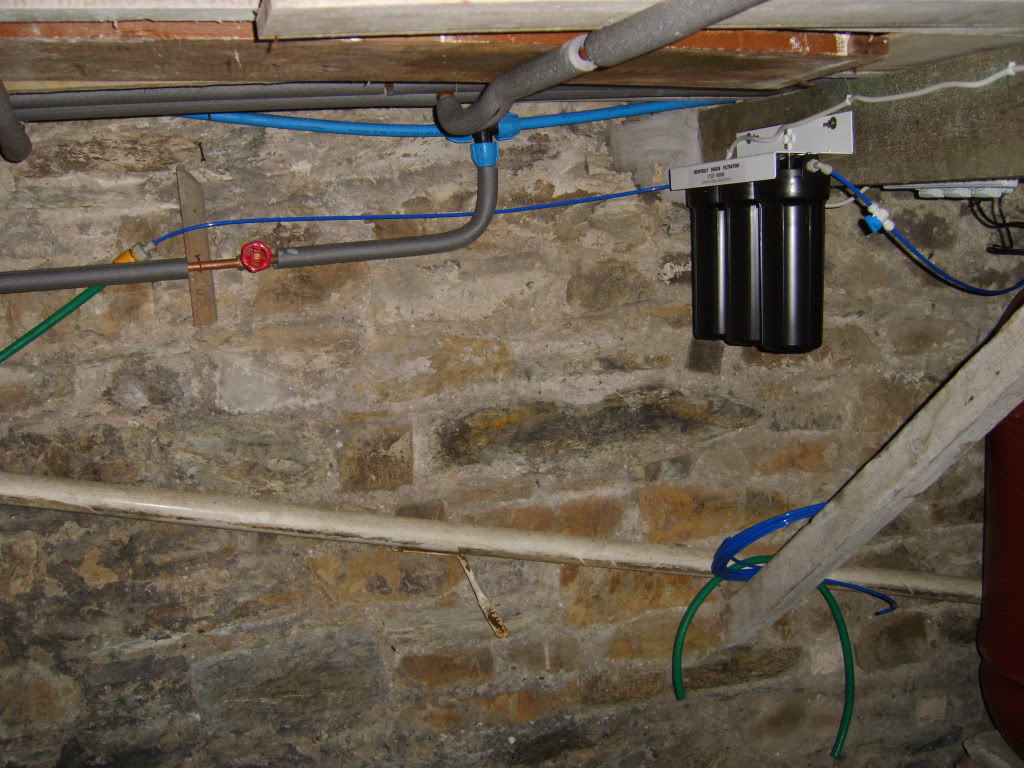 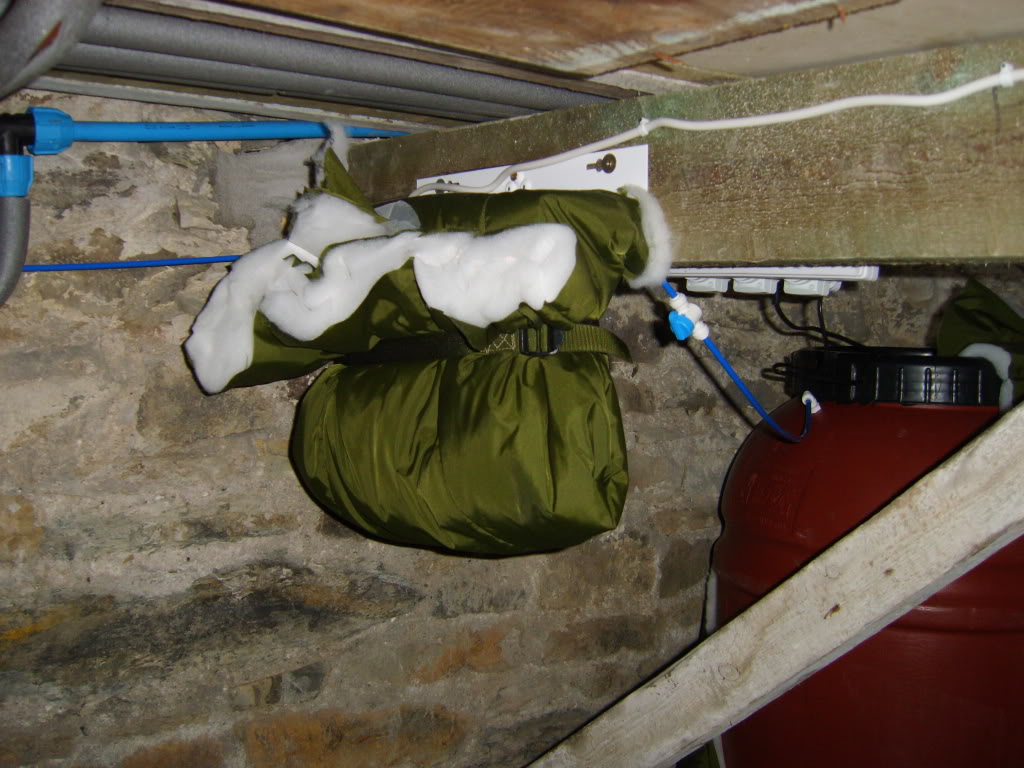 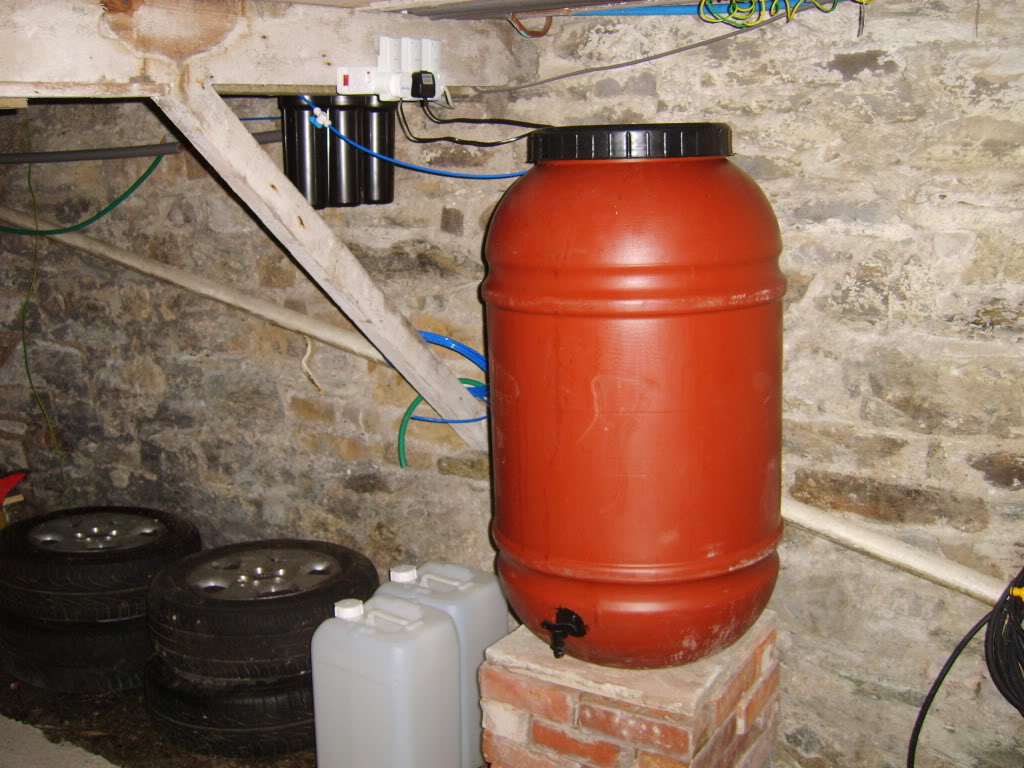 Ive set up remote control sockets so i can switch everything on and off inside the house so much easyer / lazy lol. 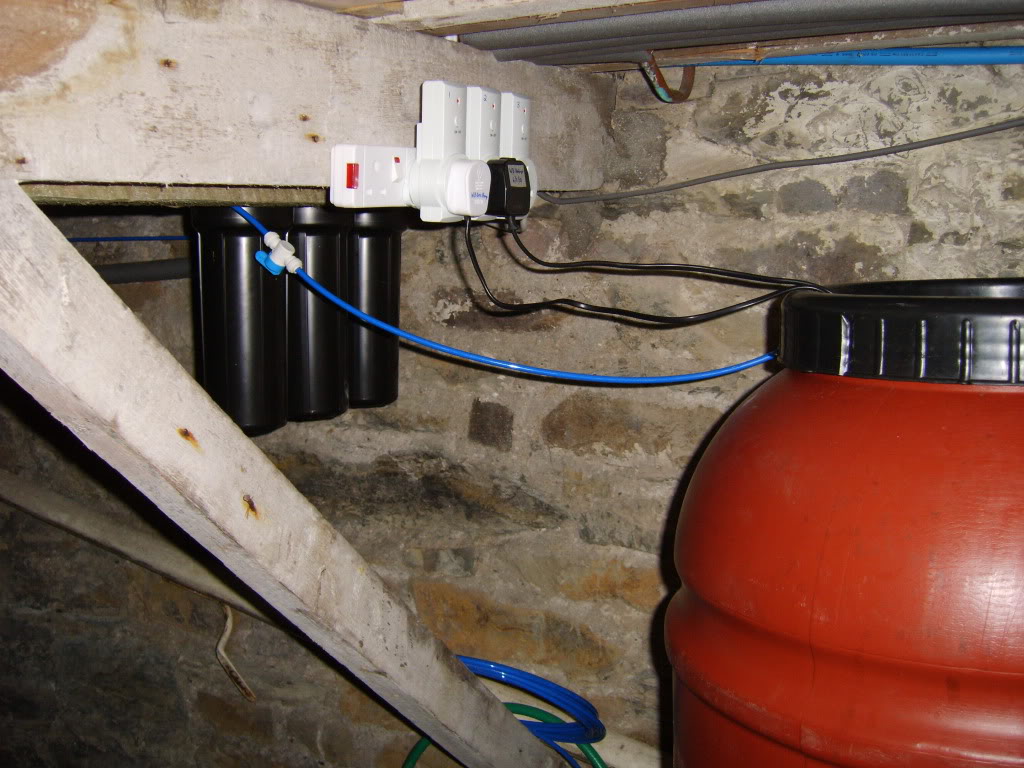 Had my spirit level out earlyer because i noticed the level wasnt quite right when i did my leak check. seems to be tilted back a fair bit and down abit one end so after alot of buggering about ive nearly got it right its still about a mm. Then i checked the floor and its all over the shop bloody old houses lol. Gonna "borrow" a bit of 1mm ABS from work tomoz if that dont level it its staying how it is lol.

Just thought id update as its now running as of tonight 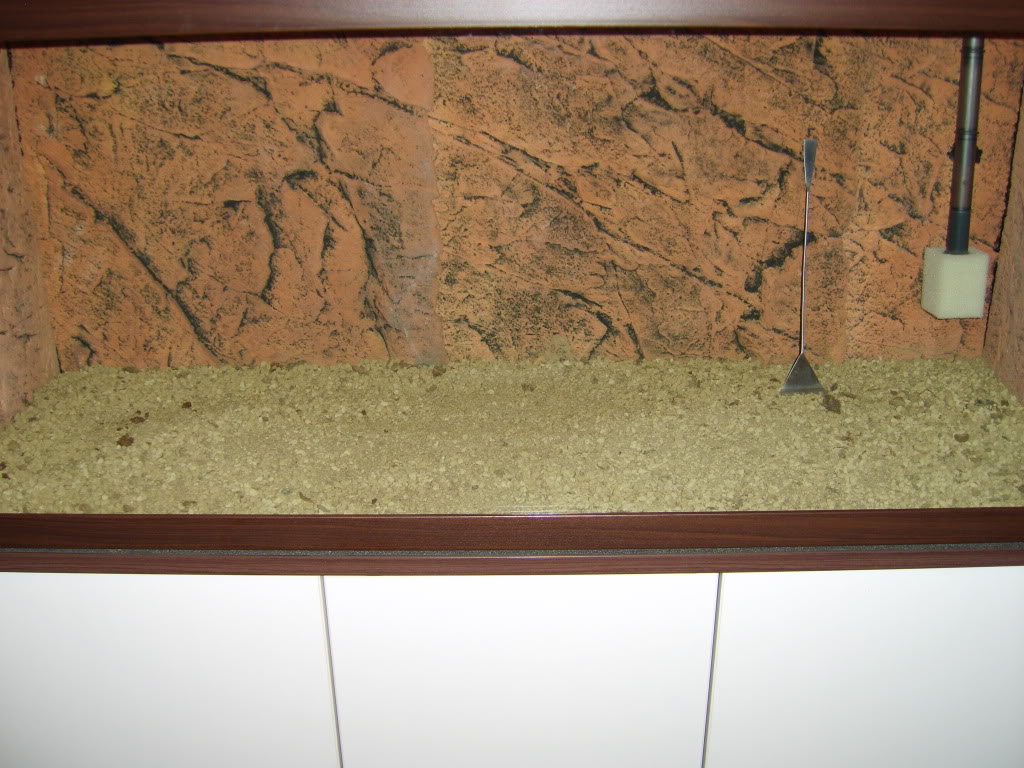 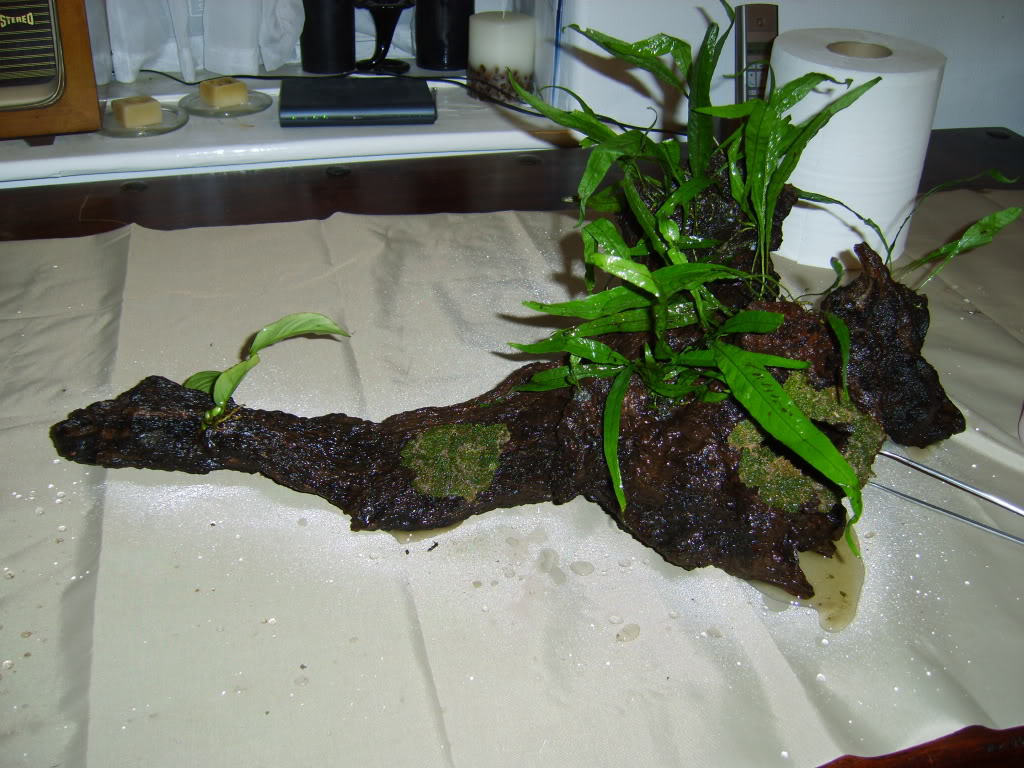 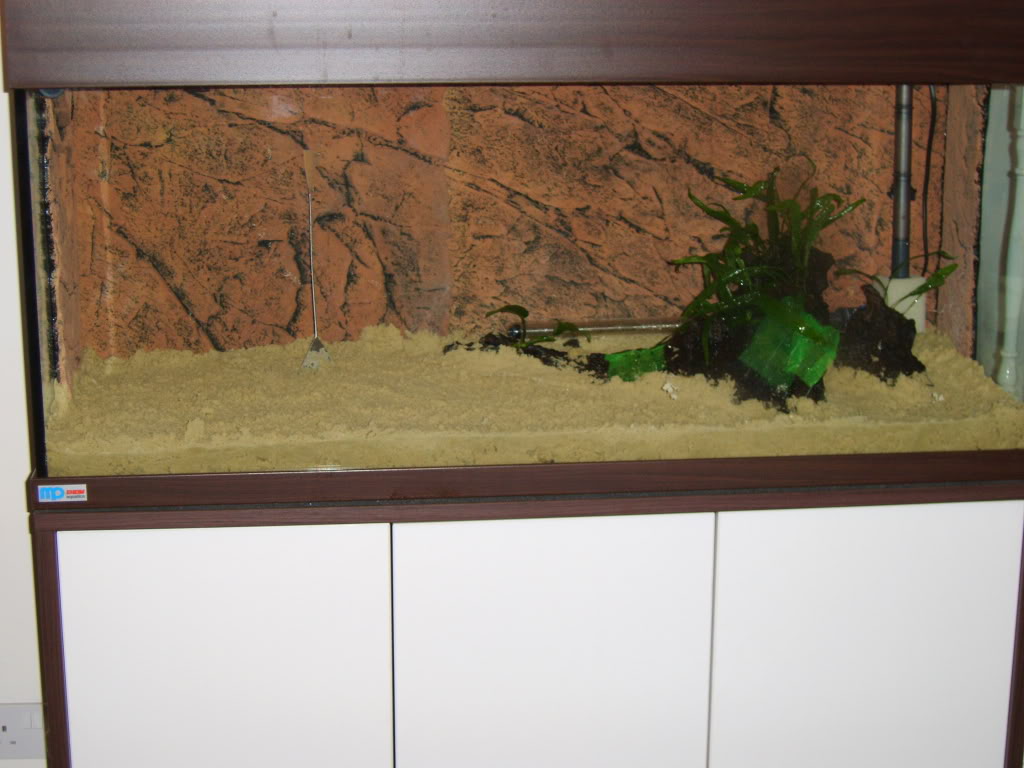 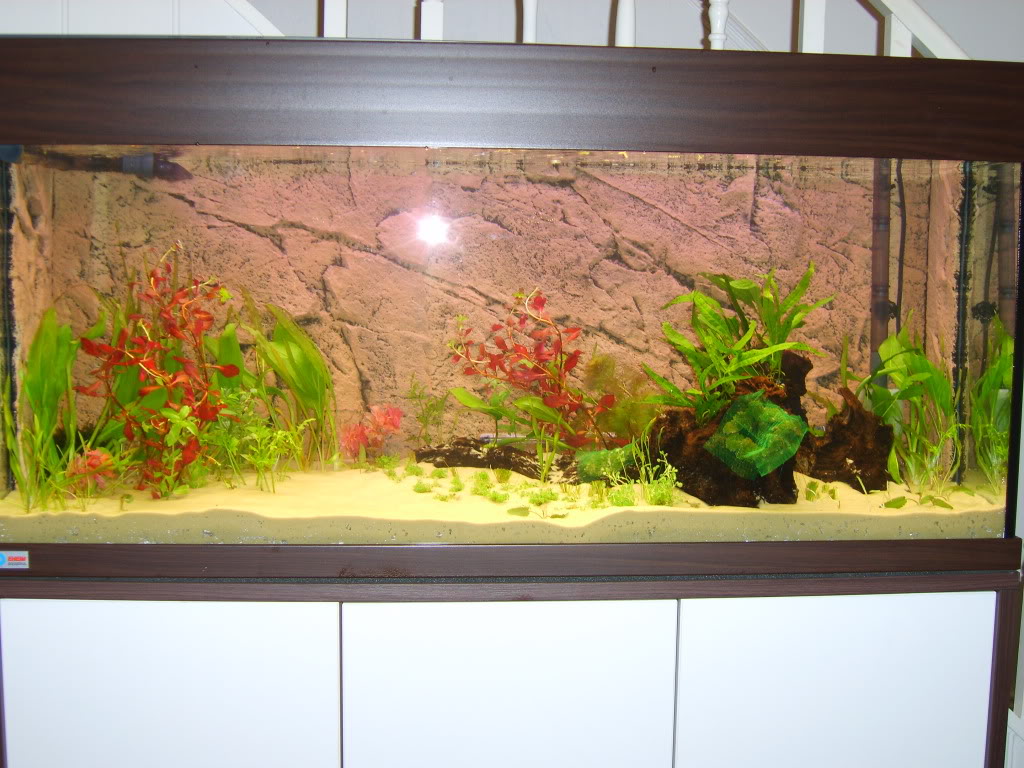 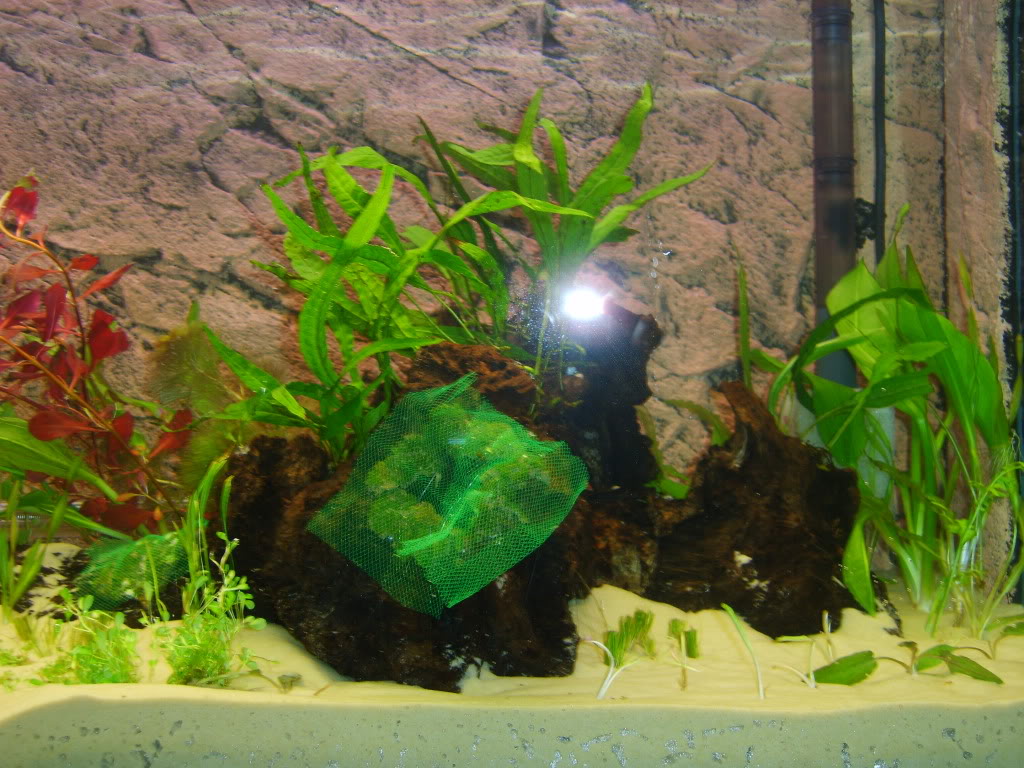 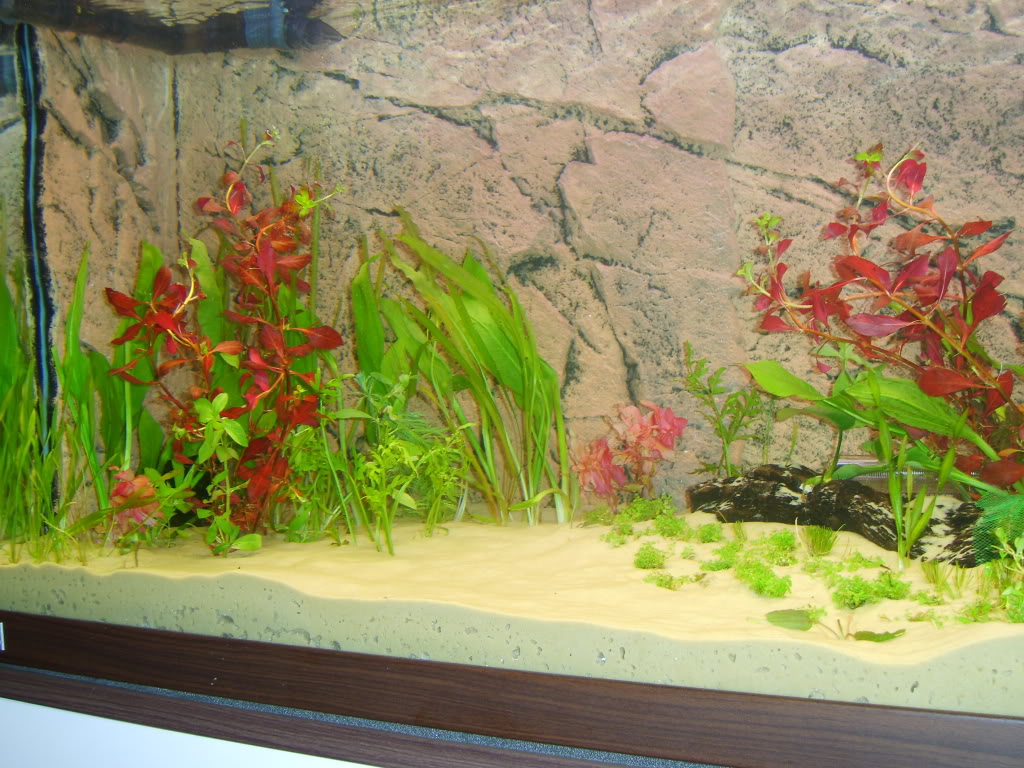 
what bubble rate should i be using for my co2? Im still not sure if its working right
T 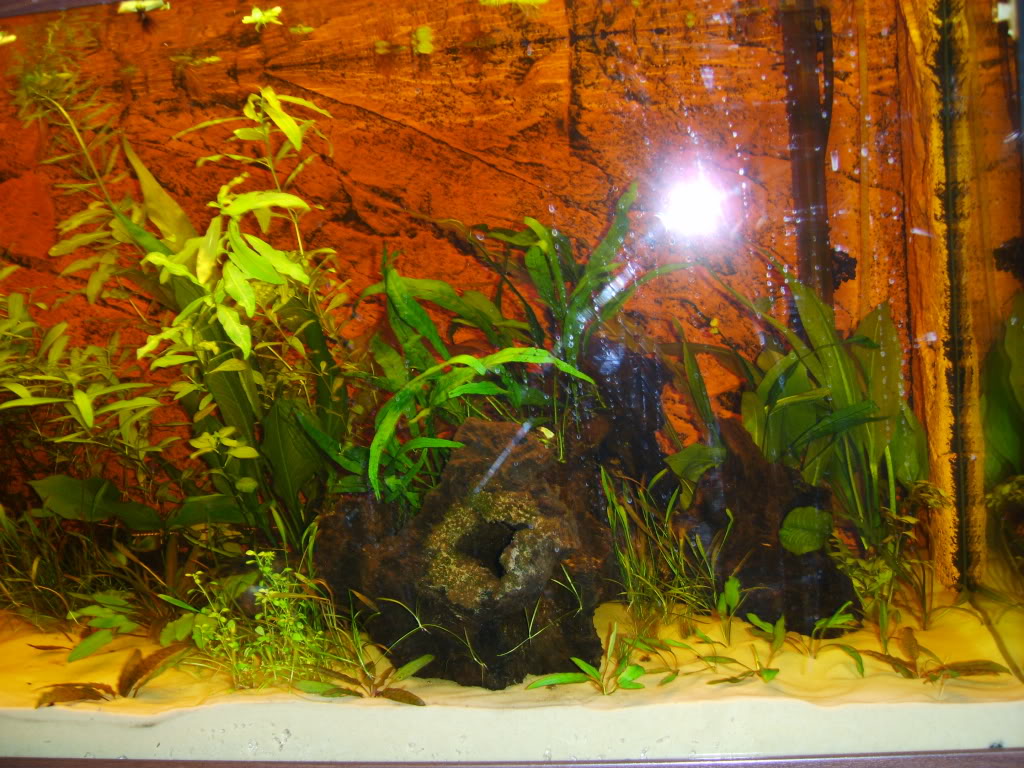 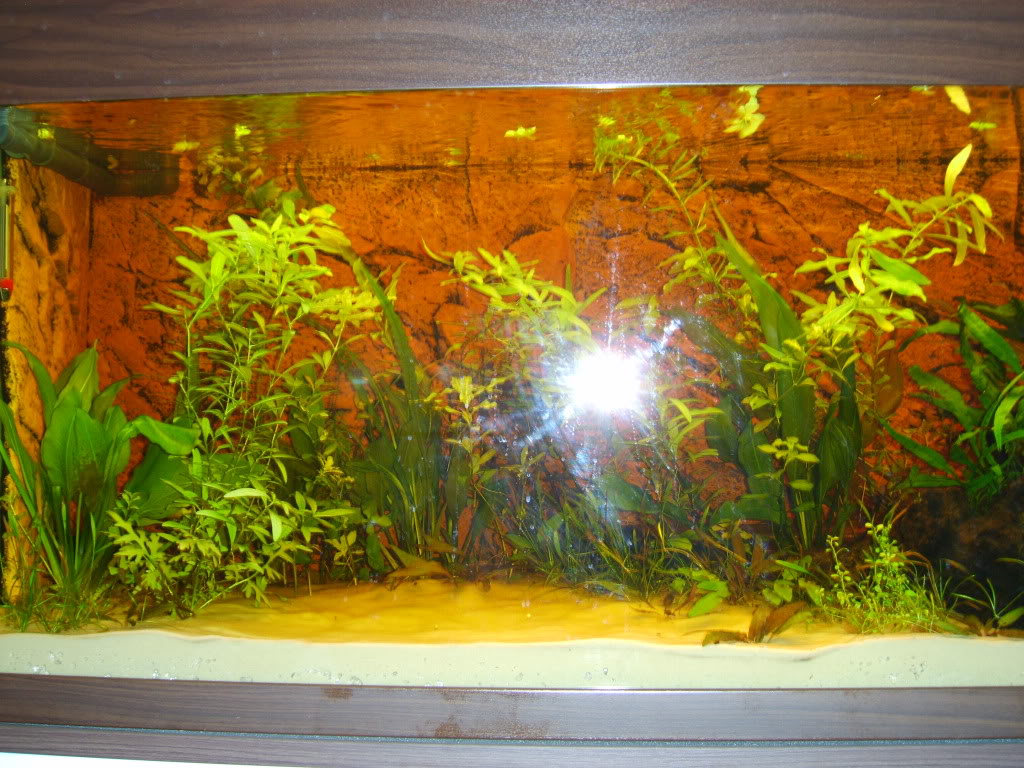 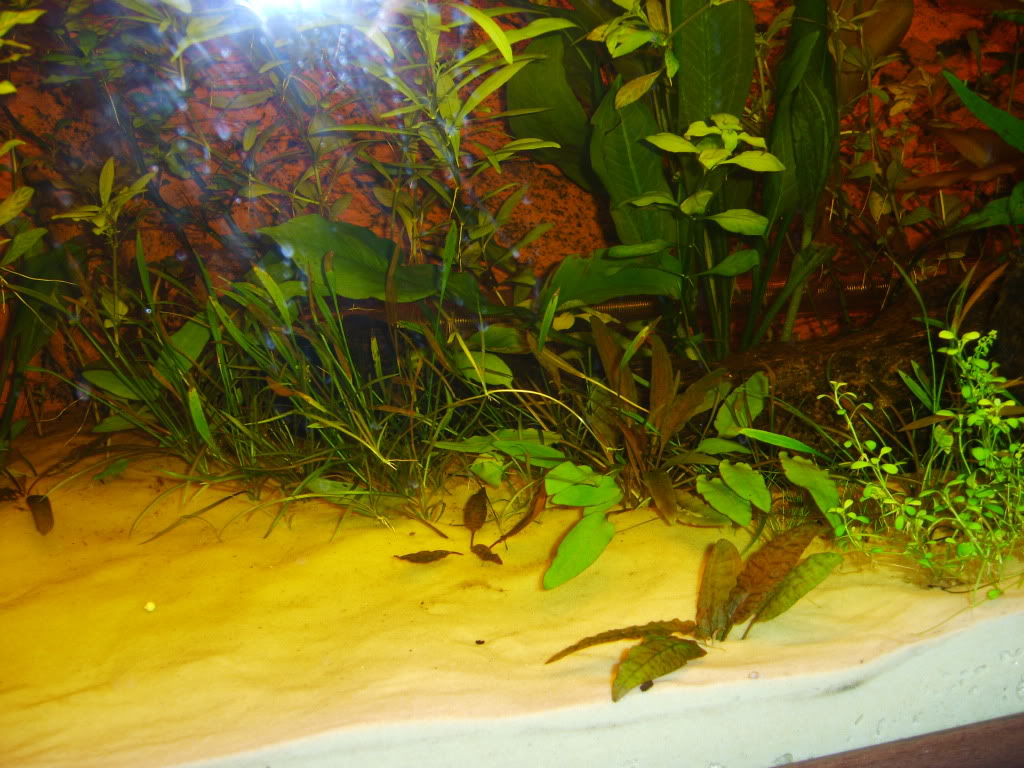 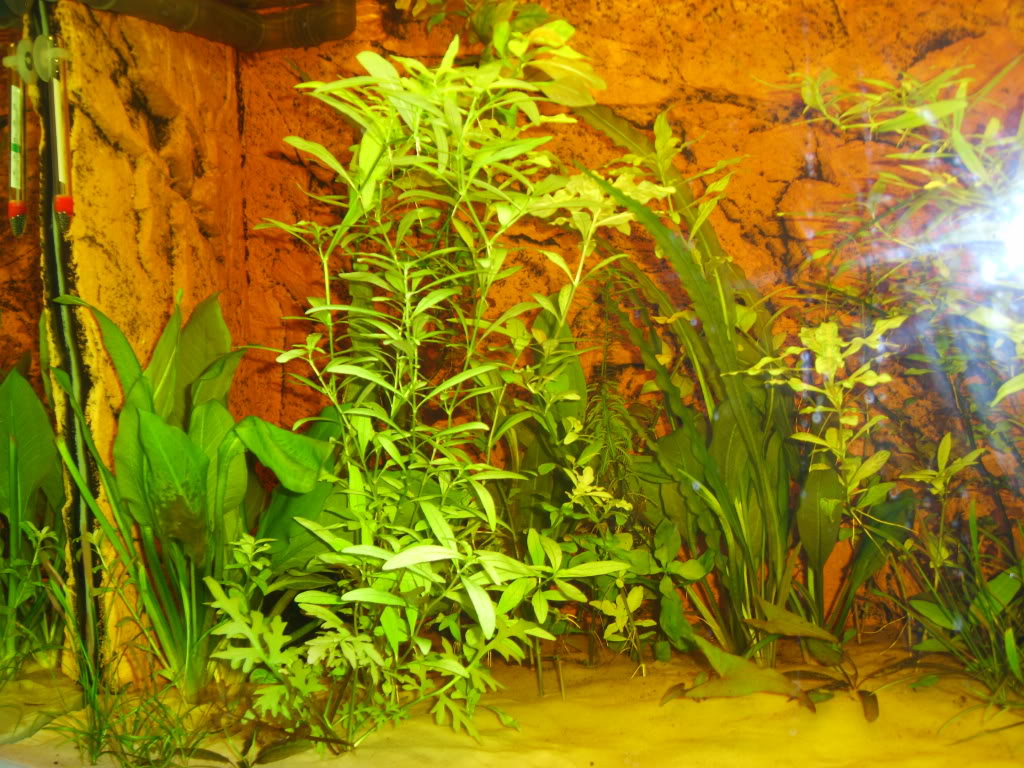 What do I do with the runners from the dwarf chain swords? Do I wait till the plantles get bigger the cut them off and replant? 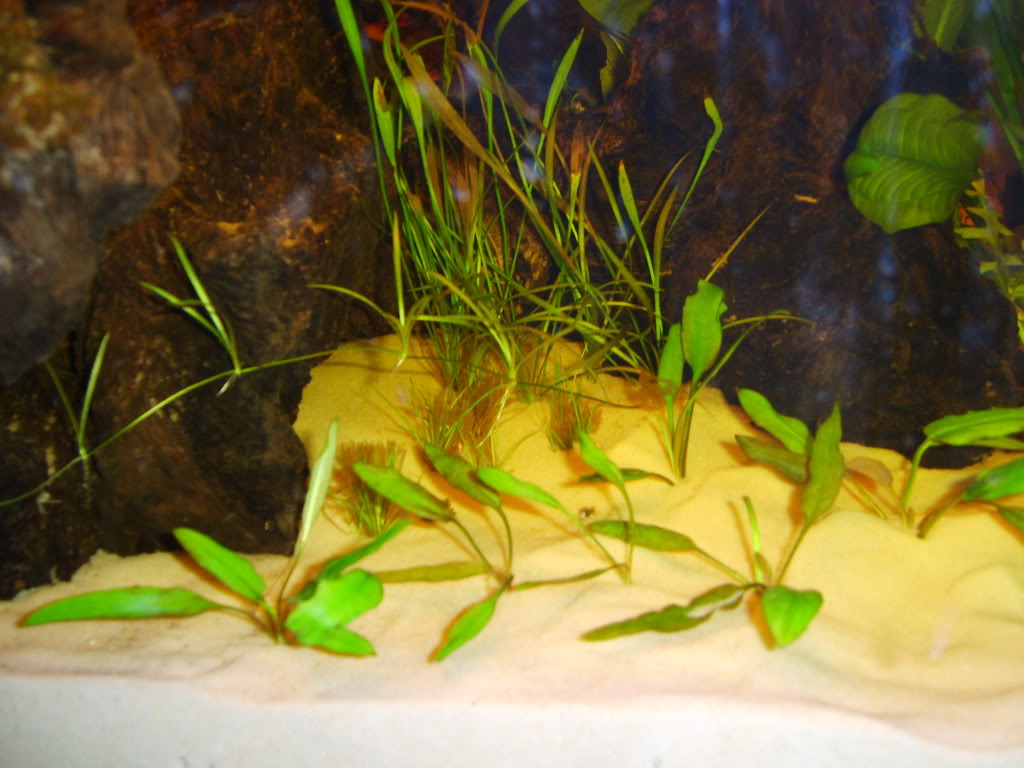 Not very impresive i know :0( but still its a start. Also how do i go about trimming the plants that have started reaching the surface?

Any tips would be great like why have the red plants gone green?

Hi Rude, nice job on the background mate, what lighting are you using? This could be an affect of red plants turning to green (Chlorophyll ect), How are you dosing? Have a look on the tutorials for advice on the cutting http://www.ukaps.org/plant-maintenance.htm

its 2 38w T8 (even tho the eheim site says its 2 T5 39w) 1 is a dennerile (spelling? lol) trocal and plant pro+. I was dosing TPN+ at the recomended dose for 4 weeks but yesturday was told to up it to 3 times the amount so I was dosing 5ml monday, weds, fri, sat and sun. So Ive upped it to 15ml but once my 2 bottles are used up Im going to change to the TFF mix from our sponser.

Hi mate, to be honest from my experience as a dedicated but, not god like, planted tank keeper, I have never really mastered red plants!
I once used a 250w metal halide light over my 35 gal tank, the red stem plants were red but, they grew very fast & the tank was quite high maintenance & not very stable either.
I now have 2 x T5s but don't bother with true red plants, I do have some very long term crypts that have a nice red hue but found the growing conditions for true red leaved plants caused problems for the other mass majority of my stock.
Of course some folk have mastered the art but, I am not one of them LOL.
My Log My log! | UK Aquatic Plant Society
My Day job Nice pond! | UK Aquatic Plant Society
High flow DIY reactor - now with video | UK Aquatic Plant Society

to be honest im not bothered about them not being red anymore it was just a nice contrast. Id like all the plants to green up and grow more tho lol but hopefully im addressing that now
W

Looks good mate! Good job! I like the large selection of plants, when it fills out this will look fantastic
Thanks, Brendan

Yeah would be great to see some up to date shots

Carl
Visit my website with my videos on Welcome to PlantedTankUK - Bringing Nature Inside!
M