I'm really excited to be aquascaping again for the first time since May last year.

I have a TMC Signature 60x45x30cm (clear silicone) with gloss white cabinet. I need to cut out a half moon in the cabinet side for the filter hoses because unfortunately they're not pre-cut. I did strongly suggest to TMC that this should be an option for the future.

I haven't even unboxed it yet, but will provide full updates as appropriate. I can say that I'm not rushing this one.

I'm still undecided about the aquascape design, but it will very likely be heavily influenced by some bloke called Takashi Amano. You may have heard of him. I'm really looking forward to experimenting with different hardscape materials and layout ideas before I even think of adding water.

If there's any specific requests for photos i.e. close-ups of the silicone work etc., then I'd be happy to oblige.

I've been looking forward to you starting up again George, and now here we are - it seems along time since we have seen you in action on here ... I will be watching out for what you are going to create and looking forward to seeing some photos.
I'm sure will be a show stopper!

Welcome back George, looking forward to what will be another great scape from you


Sent from my iPhone using Tapatalk

Watching closely George, great to have you back and getting your hands wet again

Everytime I heard about you in Afghanistan, I always remember by Grandad telling me about when he was stationed in Kandahar in the British Indian army...

Anyway, I have a TMC optiwhite too, but the black silicone 60x45x45. I wanted the largest because it was to be for a colony of Blue-eyes (P.gertrudae "Aru II") and Pygmae rainbows.

Not having side access, isnt the end of the world, but they would have been better off doing so. I think though this is not so much a specialist tank for planted aquarium, but also for Reef systems where the side access is probably not so desirable. Perhaps they could have offered two choices of cabinet, but then maybe the costs would have risen.

Not bad for whats out there. Still I half kicked myself when I saw the Portuguese NA aquariums AFTER I bought the TMC Signature.

Still looking forward to see what you come up with.

I've just finished assembling and modifying the cabinet. As well as cutting a half-moon, I also used white silicone sealant around the joins to hopefully prevent any water ingress and consequential warping that's really common with laminated chipboard cabinets.

Hi George, good to see you back. Cant wait to see what you come up with here.

You can see the cut-out here... 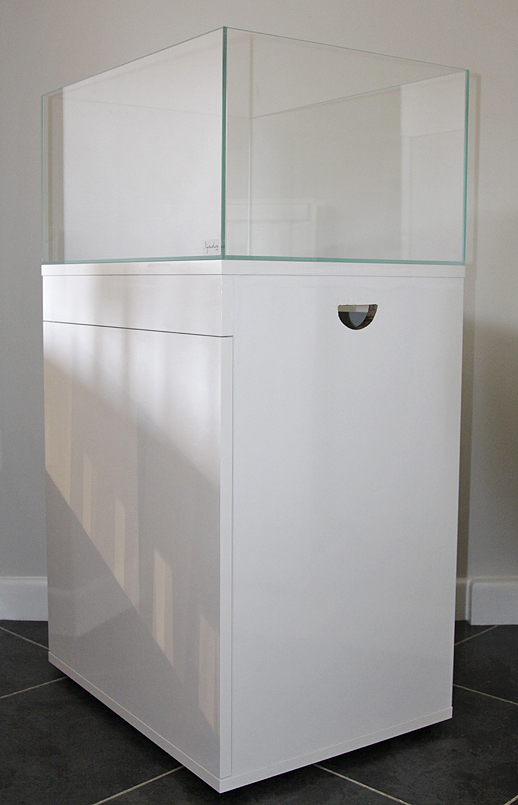 And the lighting... Apparently 34% brighter than the 1000ND so I won't be using it on 100% for a good while. PAR readings should be interesting. 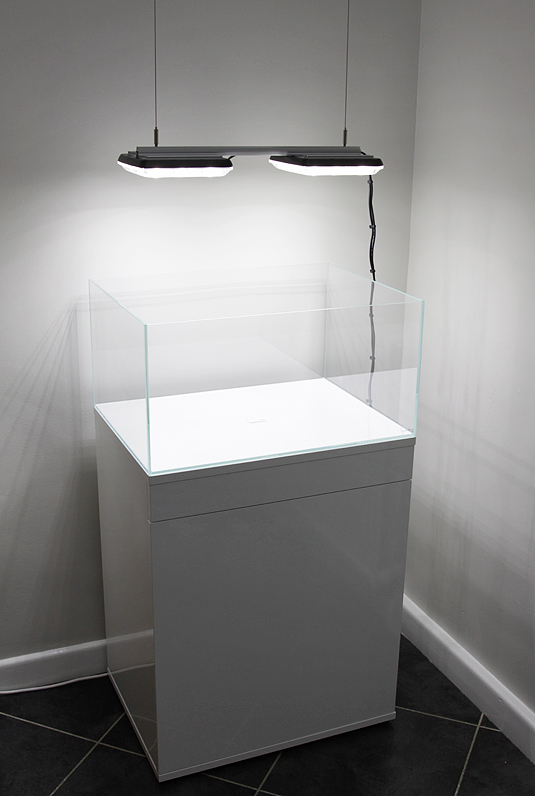 I'll probably start playing with hardscape designs tomorrow. Tempted to go Iwagumi but also have some lovely wood to try out. Plant choice is a long way off yet.

Hi George good to have you back.
These TMC tanks look the part, I see on on H2o aquatics in Brentwood they was doing really good deals on tank stand sump and lighting.

Will have to look at the NA stuff before I make a final choice though.

Any rough ideas of scape yet?

Hi George, finally get to see a master at work from the start Only joined recently so haven't had the chance to see one from the start in real time. Spent many an evening into the wee hours reading the journals etc so this will be fun and very informative I'm sure.

It does feel great to get my aquascaping head on once more. Because this isn't a commissioned jobby I am not bound by any time limits etc. so I'm determined to take it slowly and enjoy the journey, and of course share it on here.

I'm really impressed with the quality of this tank. It's the highest quality aquarium I've owned so far, and the cabinet is nice too. I think TMC have done well here, for sure.

Ryan - thanks mate. I haven't seen the NA range in the flesh yet but from the reports and photos I've seen it looks great! I'm remaining totally flexible regarding the scape. I'll be sure to share my various hardscape incarnations and I look forward to hearing what you guys think...

Murf - thank you and a belated welcome to UKAPS! Please feel free to ask any questions on this journal. Here to help!

are you hanging your lights from the ceiling?

Tank looks cool. Are these the new TMC tiles? I have seen the new grobeams and they also claim that they are 34% brighter, the led appears to be the same wattage though, so it'll be interesting to see the par readings against the old ones.

are you hanging your lights from the ceiling?
Click to expand...

Yes, Sanjeev. I think it contributes nicely to the overall equipment minimising. Why do you ask?


Ian Holdich said:
Tank looks cool. Are these the new TMC tiles? I have seen the new grobeams and they also claim that they are 34% brighter, the led appears to be the same wattage though, so it'll be interesting to see the par readings against the old ones.
Click to expand...

Yes mate. These are the brand new GroBeam 1500 Ultima tiles.

First impressions are great, they seem much brighter and seem to have a crisper colour cast (more like the 9000K 1500 XG). I'm looking forward to seeing how they get on in practice. I'll check the PAR before deciding what power and height to run them, which will also be influenced by my plant choices.

The Holy Grail for LED is one that gives great red and green colour rendition without having to use multiple colour LED. T5 is still the lighting Daddy for colour rendition and flexibility.

nayr88 said:
Hi George good to have you back.
These TMC tanks look the part, I see on on H2o aquatics in Brentwood they was doing really good deals on tank stand sump and lighting.

Will have to look at the NA stuff before I make a final choice though.
Click to expand...

Had a good look at the the NA range at Freshwatershrimp today, outstanding! i think you will have a tough choice on your hands

George Farmer said:
Yes, Sanjeev. I think it contributes nicely to the overall equipment minimising. Why do you ask?
Click to expand...

I have a maxspect over mine, but I dont think the overtank stand gives sufficient distance for more even spread. I am not sure about what you need to do to hang from the ceiling safely. I might attempt a frame, but the tank is in place so it will have to be free standing.

I certainly do agree, your way of lighting does lend to a more minimalist look.

Hey george, good to see you back. The signature does look the part and the lighting set up really finishes it off.
Just bought a 1000nd tile for a new project but thinking of another use for it now seeing this. Do you think 2 x 1000ND would be enough for a 90P or would it need 3??