I was admiring that earlier.

Looks great. That cabinet is stunning. The stand next to it looks interesting too.
T

Is the cabinet the copper one from EA?


Sent from my iPhone using Tapatalk

Tucker90 said:
Is the cabinet the copper one from EA?
Click to expand...

No it's a DIY one.
I had 'decorated' the living room with rusted steel sheets on the wall for my every so on-trend shabby chic industrial look and I wanted the cabinet to match. I thought about the EA raw concrete or copper but I didn't want to pay £300 for them to be kinda close but not quite right. So I made up a plywood cabinet and then ordered some more steel cut to size and set about giving it the same rust treatment as the panels on the wall.

It's not got quite the same finish but close enough.

Just awesome!
Still not 100% perfect.
I would toss the TV and move the tank in the middle with the light hung from the ceiling haha
I really like the look of that metal

Well I finally managed to get planted a couple of days ago. Sadly, I had to get a couple from another supplier as it was the only place that had stock. Usually they're great but i think because it was only a few pots they just sent it through Royal Mail first class and they took 11 days after dispatch to turn up. Obviously they were not in great condition and the stems had melted just above the rock wool and were very limp. I just cut them a bit higher and shoved them in so I assume they'll be fine.

I can't decide whether to order some more stems to fill out the back or just leave it as it's 4 types of rotala and I should be able to trim and replant fairly vigorously. As long as I stay on top of the initial weeks maintenance I think there should be enough plant mass to not cause too many issues. Anyway, crappy photo as I'd just finished planting. Oh and I think it was the right choice to smash up some seiryu to edge the pathway, it's a little darker on the inside than the large pieces but definitely an upgrade from the gravel/pebble look. 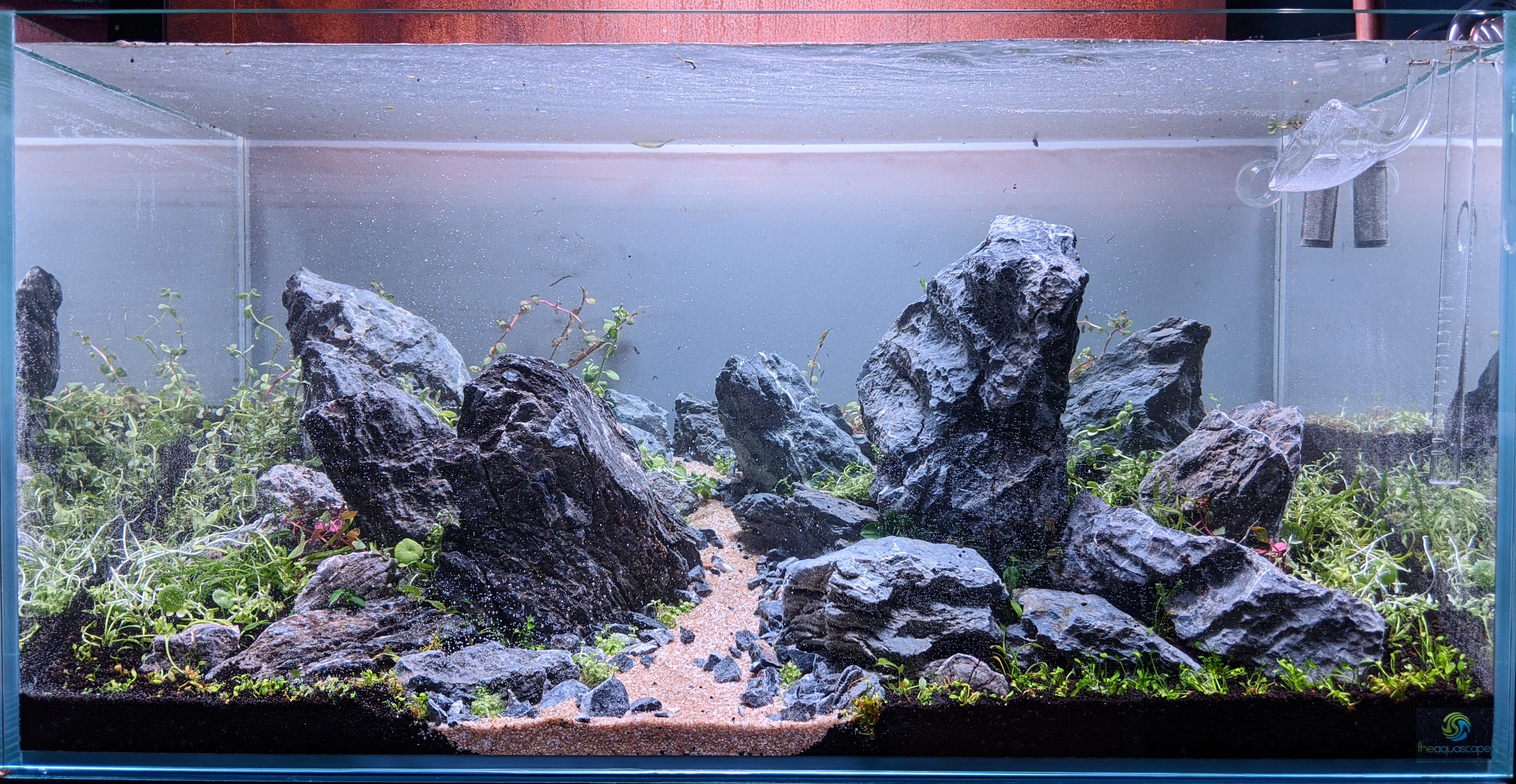 Sadly, I do have a fairly major issue. The filter is leaking.
I bought the Oase 600 Thermo second hand and I figured there might be issues - especially when it turned up with a full spare set of brand new o-rings. When it first arrived I set it up and just let it run cycling a tub of water for 2 days and there were no issues so I figured it was all gravy.
About a month later in the present day I put it on the tank and it ran sweet for a day. Came down the next morning and the cabinet had a very significant puddle so in a storage tub the filter went. It wasn't streaming water, just a constant dribble, looking to originate from under the clasps.
I decided to replace the main o-ring with the new one but that doesn't seem to have resolved things so the filter has now been running for 3 days in the tub. It's only filling about a cm a day but I need to work out where the problem is as obviously this cannot be a long term solution - any suggestions of what to try are welcome. 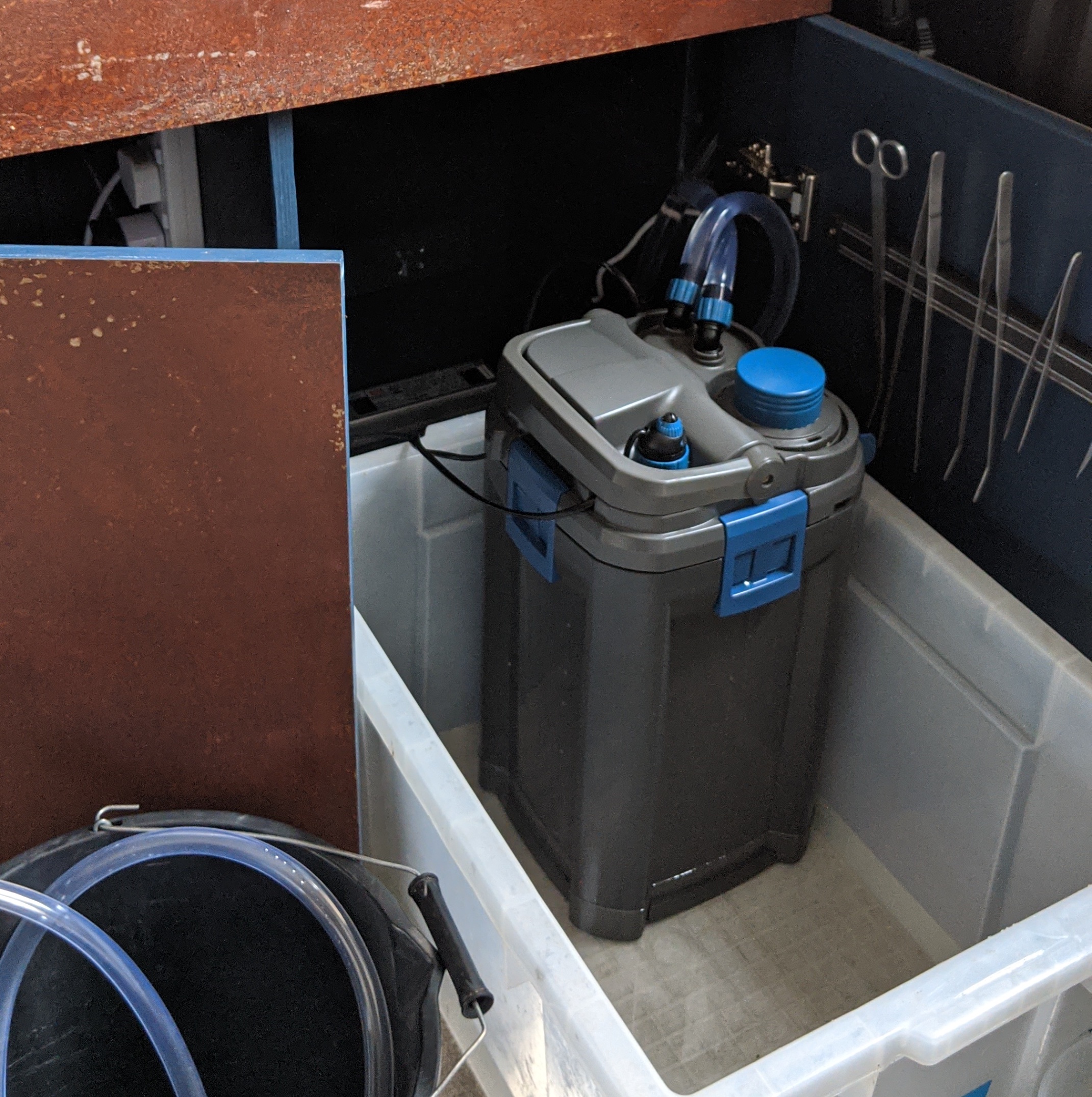 I'll update in a few days with a better photo of the planting once I'm not doing daily water changes and the tank doesn't look like it's full of lemonade.

Ah no that's a shame, not what you need after the stress of getting it all set up and planted!

The only time i've had a leak from my oase filter is when the power cord wasn't in the correct position.

I would take it apart and lubricate the o-rings(s) a lot and see if you can get a setter seal.

My 250 had a leak from the gasket for a while. Replacing the o-ring didn't help either.

After giving it a thorough clean and applying vaseline on the o-rings the leak stopped.

I have a feeling it was the small o-rings where the inflow and outlfow attach. (I think water was leaking there and filling the grouphead which would then leak over the gasket)

Scape looks great by the way, good luck with algae!

Sammy Islam said:
I would take it apart and lubricate the o-rings(s) a lot and see if you can get a setter seal.
Click to expand...

Diogo Sousa said:
After giving it a thorough clean and applying vaseline on the o-rings the leak stopped.

I have a feeling it was the small o-rings where the inflow and outlfow attach. (I think water was leaking there and filling the grouphead which would then leak over the gasket)
Click to expand...

Thanks guys. I bought some silicone grease so I'll dismantle and have a look at the other o-rings/connections around the inlet/outlet, heater and the prefilter and see if they could be the culprit.

Well it's been 2 weeks since it was planted up and not a great deal to report other than the expected.
Plants are growing quite nicely, most seem to have adapted to submersed forms.
Rotalas and Ludwigia had their first trim and replant last night.
The Crypt Parva is looking the least healthy with melt but that was to be expected.

I've been changing 50% of the water every 2 days so far and think I'll go to twice weekly now.
Started adding TNC Complete 3ml a day from 1 week in so I'll keep going with that. Some of the Rotundafolia is looking a little pale, not sure if that's the new leaves in between the green/pink stage or I need to up the dosage slightly.

Bits of brown diatoms starting to appear all over the hardscape but brushed off easily with a toothbrush during water change.

I stupidly decided that as things were looking pretty good I'd up the lights from 50% to 70%, see if I could speed up the Marsilea growth but after 3 days it went back down to 50% after seeing some green start to appear on the rocks and sand. I'll leave it till week 4 and step it up in 5 or 10%'s -

I also worked out the problem with the Biomaster. Turns out whenever I move the lever to unlock the taps a load of water flows into the head unit and then bypasses the main gasket and leaks out the side. I haven't got a fix for it yet as I've been a little busy, hoping it might just be the tap end and not the head but I'm loathed to start looking in depth until I know I've got enough time to sort whatever crops up.

cbaum86 said:
Bits of brown diatoms starting to appear all over the hardscape
Click to expand...

Marsilea seems to beat to its own drum, I’ve had it melt away, grow slow/steady, attempt a take over

I’d contact Oase with filter issue, they may have some suggestions or recognize the model from serial number if it’s been serviced etc

Things are ticking along nicely. I'm still doing water changes, about 60%, 2 or 3 times a week depending on my schedule.
The diatoms seems to have more or less gone but I'm getting a nice dusting of green algae on the hardscape. I'm not too worried I think it's just green dust and I've heard recently it's best to leave it to go through it's lifecycle for a few weeks before trying to remove.

Also added in the livestock from the previous tank so I'm sure they'll happily graze on what is there.
I was wanting to get some Clithon Corona but my usual online haunts seem out-of-stock and I'm not sure anywhere locally has them and whether I'd even be able to go purchase in the current climate. A few phone calls may be in order.

The rotala has had a nice hack back, everything else I've left and may do the mid and foreground plants next week.

I altered the RGB ratio of the LEDs, up'd the red and green by 5% to 55% and dropped the blue to 45% to see if I preferred a warmer hue. I'm not sure that I do but I'll give it a week and if not I'll just even them all back out.
I also decided to remove the CO2 reactor. Whilst I did enjoy the mist free tank it reduced the flow of the Biomaster too much and also made a right racket when the co2 went off, presumably leaving some kind of gas pocket and the sound of gurgling water. I put my old inline diffuser on but that seems to be leaking so ordered the inline co2 art atomiser which should be here in a couple of days hopefully. In the meantime going old school in tank.

Anyway, here we are to date pre and post trim. The photos are a little crappy, rushed taking them.

And a few of the livestock:

@cbaum86 are those ember terras in the first pic? Gorgeous saturated red.

Awesome colors from that rgb vivid 1 too.

those amanos are fat!

hypnogogia said:
are those ember terras in the first pic? Gorgeous saturated red.
Click to expand...

They are, fairly old now. I think getting on for 3 years I've had most of them. As Cookies says, I think a chunk of it comes down to the colour rendition of the light.

It's lovely, I just wish it had the shades like the v2. I might make up a pair when I have time.

The females are absolute beasts. As long as they keep munching and cleaning I won't shame them into weight watchers just yet.

Sent from my SM-T510 using Tapatalk

Great progress after 4 weeks, I have placed it on the FB page

Agree completely with the sentiments of others. Incredible scape and plant growth.

I finally got around to removing the old tank and stand and replacing with the chair that was where the current AS900 is. Nice to sit closer to the tank to really take in the details and block out more of the periphery. 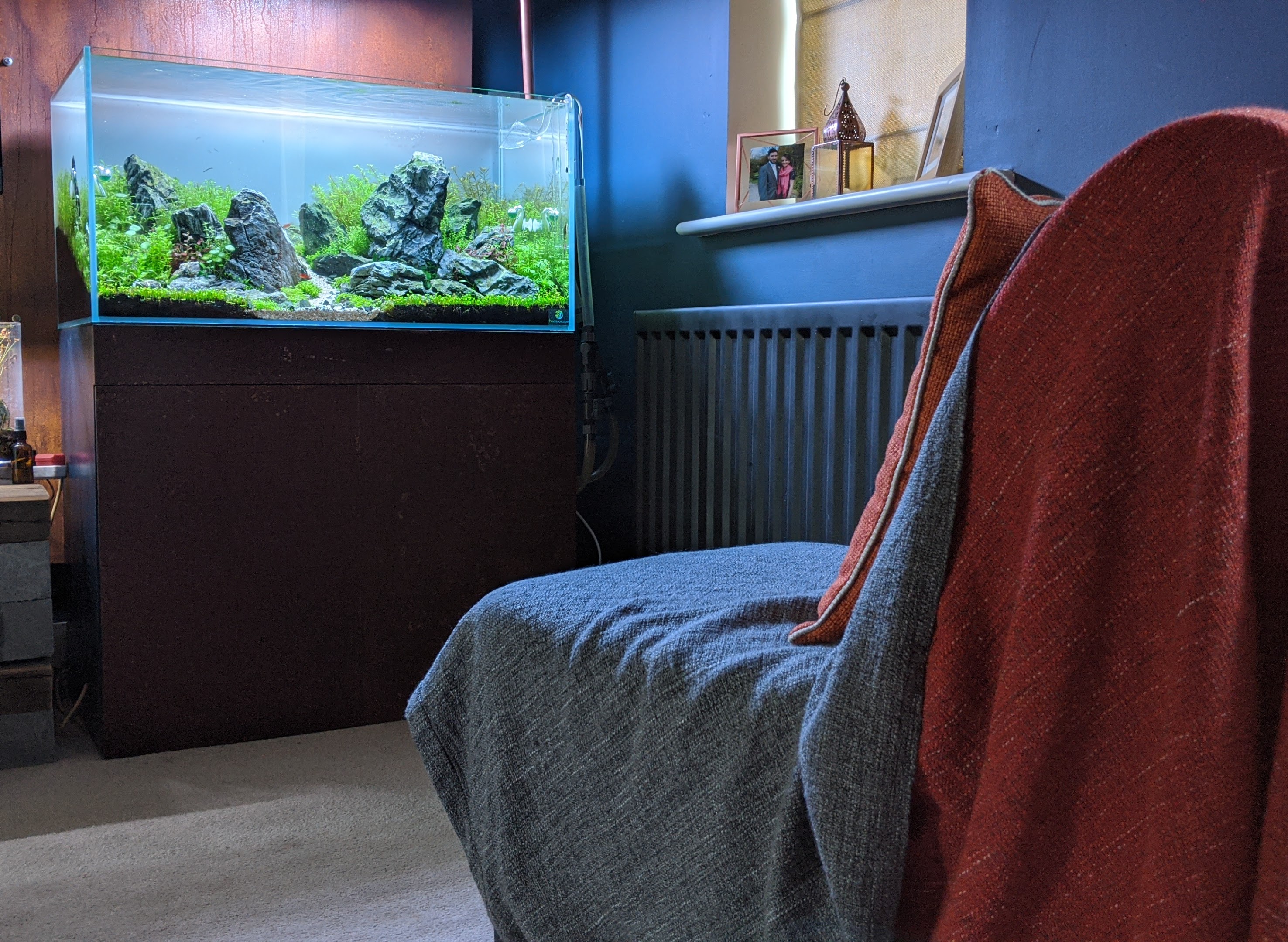 cbaum86 said:
I finally got around to removing the old tank and stand and replacing with the chair that was where the current AS900 is. Nice to sit closer to the tank to really take in the details and block out more of the periphery.

Yep, it’s always nice to sit and enjoy the tank, and I’d be sat there for long periods. Great scape in a great setting