Do I need to cycle a planted tank

This has been going round my mind for some time now...

I get that microorganisms and bacteria will develop but left alone the plants will die off? (certainly my experience where I forgot I had left some plants in the hospital tank...)

I guess most UK tap water will provide N via Nitrates and some micros but presumably a key element here is water changes but also ferts?

jameson_uk said:
I guess most UK tap water will provide N via Nitrates and some micros but presumably a key element here is water changes but also ferts?
Click to expand...

You still feed the plants, you can use a regular fertiliser addition (<"anything from 1/10 EI upwards">), or you can use the Duckweed Index.

I like small volume regular water changes, but you can probably get away with ~10% a week water change.

dw1305 said:
This article by Dr Tim Hovanec (from 1997) on <"Aquatic plants and the nitrogen cycle">. It should also be noted that <"Lobelia dortmanna"> is a plant from cold, <"oligotrophic"> lakes, with a very low potential growth rate.
Click to expand...

There is an updated paper on the effects of Lobelia dortmanna on rhizosphere microbial assemblages:

"The effect of Lobelia dortmanna L. on the structure and bacterial activity of the rhizosphere". K Lewicka-Rataj, A Świątecki, D Górniak - Aquatic botany, 2018.

I have access if any-one wants a copy, but the key findings were:
cheers Darrel
B

I bet you could run a planted tank without a filter, just by using a powerhead for flow. You would have enough surface area on the within bogwood, rocks, substrate and with the assistance of plants to house enough bacteria to convert ammonia (or uptake by the plants) Reef tanks have used that principle with porus rocks for years.

Lots of people do that. It used to be the normal way, then it went out of fashion, then Diana Walstad re-invented it. That's the name to Google for info.
You don't even need the powerhead, unless you injected CO2, then you would need the flow, but low-tech is more usual.

dw1305 said:
...but I would also be prepared to bet that relatively few of the quoted NO3 values on forums are even in the right ball park.
Click to expand...

I'm having a wander around some older threads and spotted your post above. I am aware of a few reasons why NO3 values may be incorrect such as:

[1] Some test kits reporting 'nitrate' as 'nitrate nitrogen'. Then, needing to multiply the result by 4.43.

[2] Not shaking one of the reagents adequately.

But I would be keen to learn more.

jaypeecee said:
I am aware of a few reasons why NO3 values may be incorrect such as:

[1] Some test kits reporting 'nitrate' as 'nitrate nitrogen'. Then, needing to multiply the result by 4.43.
[2] Not shaking one of the reagents adequately.
[3] Using test strips instead of liquid tests.

But I would be keen to learn more.
Click to expand...

In terms of tests that require a colour change the problem is really that ~ all <"nitrate compounds are soluble">.

This means that we need to reduce the nitrate (NO3) to nitrite (NO2), and then combine that NO2 with a second reagent to give a coloured compound. From <"https://archive.epa.gov/water/archive/web/html/vms57.html">

The cadmium reduction method is a colorimetric method that involves contact of the nitrate in the sample with cadmium particles, which cause nitrates to be converted to nitrites. The nitrites then react with another reagent to form a red color whose intensity is proportional to the original amount of nitrate. The red color is then measured either by comparison to a color wheel with a scale in milligrams per liter that increases with the increase in color hue, or by use of an electronic spectrophotometer that measures the amount of light absorbed by the treated sample at a 543-nanometer wavelength. The absorbance value is then converted to the equivalent concentration of nitrate by using a standard curve.
Click to expand...

We don't tend to use cadmium (Cd) any more, but all these types of colourimetric tests work in the same way, just with less toxic reagents.

Other than the factors you've mentioned, issues can come with interference from other monovalent anions, this also affects <"ion selective electrodes">.

My suspicion is that a lot of the variability is really down to people not diluting the initial sample of tap water with RO.

You need to do more tests, but you just serially dilute the sample down until you don't get a colour change. At that point, using the conversion factor that you got from the equation for your standard curve, you multiply the last positive NO3 value you got by the dilution factor.

I've actually done this with (someone else's tank water, using the MQuant strips) and the initial ~25 ppm NO3 reading, went following dilutions, to about 200ppm NO3. I wouldn't rely on the 200 ppm as accurate, but I'd be willing to bet the actual value was nearer 200 ppm than 25 ppm. 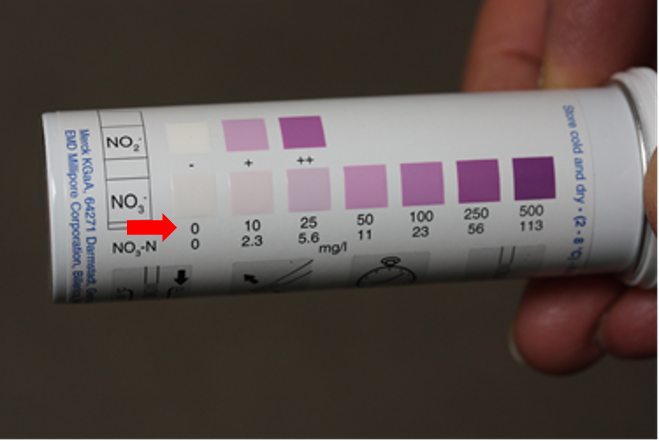 As a disclaimer the strips were all I had to hand, so I don't have an accurate value, and I would agree that there are better options for the aquarium.