becks said:
It’s believed to be erythromycin
Click to expand...

In that case, my understanding is that it wouldn't be considered legal in the UK as it's an antibiotic.

jaypeecee said:
In that case, my understanding is that it wouldn't be considered legal in the UK as it's an antibiotic.
Click to expand...

I believe you are correct.
A cynical person might think that could be a reason for not revealing what's in it. That person might also suspect a reason for selling it as a stain remover could be that the regulations are less stringent than for selling it as a pesticide, in terms of testing, licencing and proving that it is effective and safe.
Or it could just be that they are keeping a 'trade secret'. ???

Here’s another treatment hiding behind ‘Trade Secrets’ not only the website but also in the MSDS. 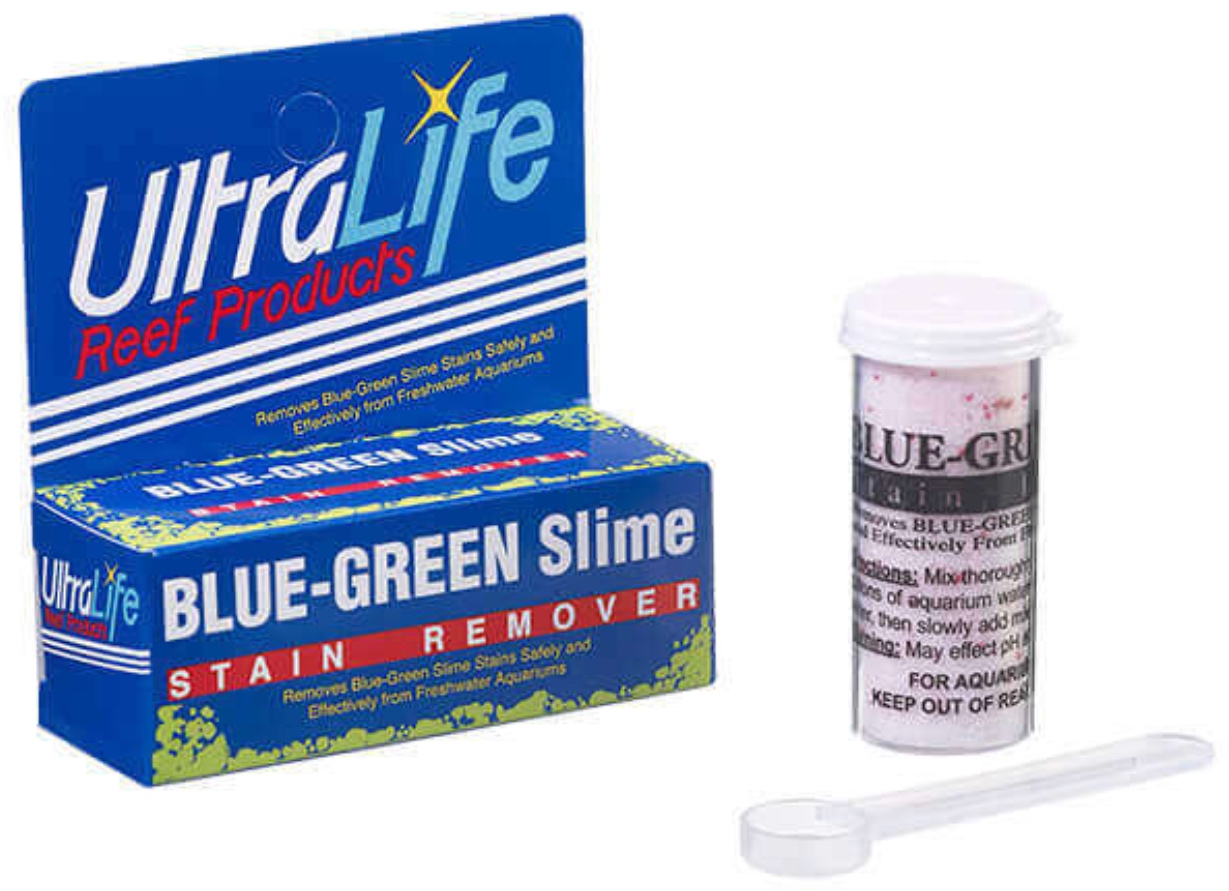 I have some similar ‘Pink Salt’ in the toolkit, it’s called Manganese Sulphate, granted it’s not as Pink as the one pictured above which you’ll find if you search looks more like Manganese Chloride, I’m still undecided if it’s an Anhydrous or Tetrahydrate form because visually the Anhydrous one is supposed to be Pink and the Tetrahydrate Rose (red rose or pink rose?).

No idea on the concentration of Manganese so it could be bulked out with other secret ingredients (filler). It’s possibly may not be pure Chloride Salt as that would be a Pink cubic like crystal although it could be milled to a finer powder for faster solubility due to increased surface area to volume.

If this sounds like random guesswork take note that the Warning on this product is that it may/will ‘Increase Biological Activity’ resulting in an increase in oxygen demand causing available oxygen to fall, it may also adjust the pH. That’s just plain hilarious as this is exactly what happens when you add Manganese into an Alkaline environment, it oxidises (removes O2 from the water column) and adjusts the pH (down). The instructions for dosing are confusing in that they say only dose once in a week but dose again after 48hrs if necessary, how you determine what’s necessary it doesn’t say in the above link, unless of course there’s some fine print instructions in the packaging. I figure the necessary bit is that if the starting pH of the aquarium is high say getting close to pH9 (Marine could be this high) then most of the manganese will oxidise and become unavailable, however it will have moderated the pH down a little so that on further addition later it is more available and effective.

Anecdotal evidence for its effectiveness can be found on a few forums where it appears to have worked where the Cyano halted growth, browned out and died off.

I find it funny that the oxidation state for Manganese is Brown in colour (blue brown but hey semantics) and why it’s remediated for in drinking water supplies (along with Iron), not just because it makes it taste funny but because it’s Brown nasty stuff that upsets Launderers by STAINING washed clothing!

Yes, I've seen BGSSR many times online but never used it. The colour appears to be mostly white with a few pink crystals in it. Perhaps it's the tetrahydrate form of manganese (II) sulphate?

Yup from the moment of addition unchelated Manganese uses up free Oxygen in the water to form Manganese Oxide and it does this ever readily the higher pH/Alkalinity.

X3NiTH said:
If this sounds like random guesswork take note that the Warning on this product is that it may/will ‘Increase Biological Activity’ resulting in an increase in oxygen demand causing available oxygen to fall, it may also adjust the pH. That’s just plain hilarious as this is exactly what happens when you add Manganese into an Alkaline environment, it oxidises (removes O2 from the water column) and adjusts the pH (down).
Click to expand...

Sorry with my last two posts. I got into a mess trying to edit them too quickly. Hope my ramblings make some sense!


X3NiTH said:
Yup from the moment of addition unchelated Manganese uses up free Oxygen in the water to form Manganese Oxide and it does this ever readily the higher pH/Alkalinity.

Which paper did I send you about manganese and cyano? Do you remember?

I'm going to give my brain a short break.

Back a bit later.

I'm also acutely aware that, if anyone has been trying to follow the last few quick-fire posts, many apologies.

It’s the one I posted the graphic from above.

I think Cyanobacteria sees Manganese like cake and can’t stop eating the stuff if it’s surrounded by it. Like Monty Pythons Monsieur at some point it must reach that final cake.

X3NiTH said:
I think Cyanobacteria sees Manganese like cake and can’t stop eating the stuff if it’s surrounded by it. Like Monty Pythons Monsieur at some point it must reach that final cake.
Click to expand...

I have the paper now.

X3NiTH said:
So it would be good to find a way not just to eliminate this from tanks but to keep it out by creating the environment to prevent it by feeding the tank the elements cyano doesn’t like and limiting the ones it does (or adjust the element to element ratios). Easy Peasy then

No chance to eliminate spores of the Cyano from the tank, they are abundant on whole Earth, and because of them we can breath using oxygen.

I think the only way to keep them at bay is to create O, N and P (I'm not 100% sure about P) rich environment. And the proper flow is a must - as any colony it can be killed by some kind of movement of the water (constantly supplying oxygen and others) etc.

Is actually a substance made and used by certain plant species, the most common one is the willow tree. In ancient times it is/was extracted from the bark and put in ointments and drinks etc. It's the antiseptic bactericidal painkiller commonly know as Aspirin. Science can not really prove it yet but assumes that plants use this substance to prevent been nibbled at and rot from damage.

Anyway, somewhere around the turn of the 19th century, the pharmaceutical giant Dr Bayer discovered it could very cheaply be extracted industrially from coal. And the plants containing it were no longer used and slowly went into oblivion with the general public.

But there still are some mythological practices around using Willow Water for all kind of alleged beneficial health purposes in homoeopathy and even in horticulture to give young plant cuttings a better start and higher survival rate. Often with mixed results and reviews... (Mixed concentrations?)

Fresh cuttings from young Willow branches actually also is an old traditional and popular practice in the aquarium hobby against excessive algae growth. The main alleged contribution is, it grows on and uses a lot of nitrates. It might be that it also releases a tiny dose of Salicylic acid to the water column that has beneficial effects on the long run with suppressing bacterial issues.

Maybe a nice question for the Myth Busters...

And old-time fishkeepers used to use willow roots as spawning mops, which was believed to help prevent the eggs from getting fungus.

Witcher said:
No chance to eliminate spores of the Cyano from the tank, they are abundant on whole Earth, and because of them we can breath using oxygen.
Click to expand...

Yup and because of this they had to develop complex sequestration mechanisms to adapt to bathing in their own waste products which also happened to oxidise their metal food sources making them unavailable.

It's time for another update. On 23 April, I installed a UV-C sterilizer in my experimental tank. At this point, the cyano (aka BGA) had really taken hold on the substrate (gravel) and on the RH glass panel of the tank. On 26 April, I added 2ml of Blue Exit to the tank and the UV-C lamp was off. But flow was on. I then added 2ml of Blue Exit on 27, 28, 29 and 30 April. On 1 May, the UV-C sterilizer lamp was switched on. By 5 May, the cyano was turning black. I then added further 2ml doses of Blue Exit on 6, 7, 8, 9, 11 and 12 May. From time to time, throughout this period, I stirred up the gravel and cleaned the tank glass panels using only a 'scrubby'.

The rationale behind my approach was to use Blue Exit as the first line of defence against the cyano. But, I know from experience that this alone has not been sufficient to completely eradicate the cyano/BGA. My thinking was to use a UV-C sterilizer to kill off any BGA suspended in the water column. Right now, it appears to have been successful. I've attached some photos to hopefully illustrate this. And, I do apologize for the (lack of) quality of some of them. 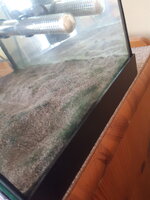 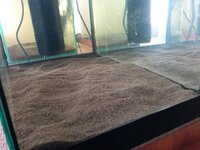 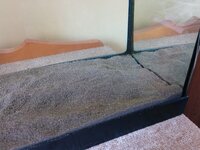 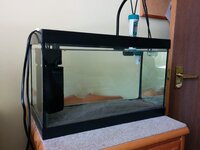 I will add a few more details later today.

The first thing I'd like to mention is the (lack of) toxicity of Blue Exit to fish. Please see the following report:

One of the conclusions of this independent investigation was "At acute toxicity tests on (Danio rerio) we found out, that using of BLUE EXIT is completely safe, because even with hundredfold concentration no fish died".

I also emailed Easy-Life, the manufacturer of Blue Exit as it contains salicylic acid, which has bactericidal properties. So, what would be the effect on beneficial bacteria in the aquarium? This is the question I put to Easy-Life:

"Since salicylic acid has anti-bacterial properties, what effect, if any, will this have on the beneficial bacteria (including nitrifying bacteria) in an aquarium? Is this something you’ve evaluated?" and this is the reply I received:

"The effect on beneficial bacterial is minimal. The normal use of the product, has barely any effect on them at all".

And, there are no other additives in this method that I'm proposing. The other active agent is UV-C light. I used a Mini Green Killing Machine from www.aa-aquarium.com/gkm.

This method does not require the tank to be blacked out.