Tom this thread has been without an update for too long!

mattb180 said:
Tom this thread has been without an update for too long!
Click to expand...

mattb180 said:
Tom this thread has been without an update for too long!
Click to expand...

Martin in China said:
I agree....far to long
Click to expand...

That or I'll come visit you again

James O said:
That or I'll come visit you again

I'm away at the moment but I'll do an update when I get back... Looking a little sparse at the moment because it's slowly growing back in after I pulled out a lot of the planting (got fed up trimming the ludwigia every week).

I'll try and get some full tank shots later, but here's my bruiser A. hoignei alpha male. Still the boss after all this time, despite sharing the tank with 3 other equal sized males. In the process of creating what I think is probably his fourth spawn... 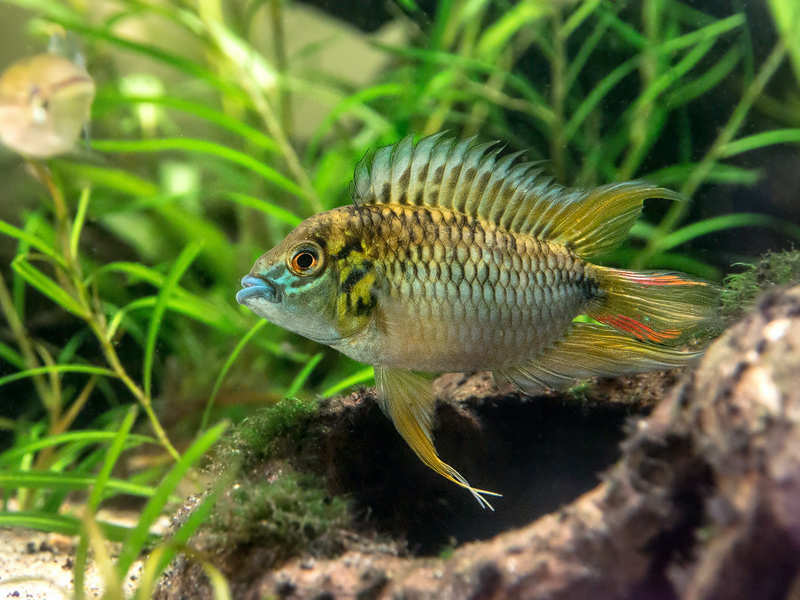 Right, so here's an update that I haven't been looking forward to writing.

Things had been ticking along nicely for a long time... I'd added some really nice gold and ruby tetra and a group of orange Corydoras venezuelanus. The planting had been redone, mainly with Eichornia and everything was beginning to grow in again. Then I managed to pick up a really nasty strain of medication-resistant whitespot. My green neons have always been extremely susceptible to spot... almost every time new fish go in the tank they seem to have a minor outbreak, but it never spread to anything else and 2 or 3 doses of Protozin always sorted it out. This time, I ended up losing all 50 green neons, all my ruby tetra, all my Poecilocharax and various numbers of Iguanadectes, headstanders and pencilfish. Probably ~100 fish in total. The cichlids and catfish were largely unaffected, but it took nearly a month cycling various treatments to get rid of it altogether. Really horrible.

However, the sudden lack of snack-sized fish has allowed me to buy a group of 6 Satanoperca daemon which have been sat on sale in work for months and months with criminal lack of interest from customers. They've only been in a few days and so far have been 100% peaceful - even the Apistogramma are pushing them around. They have a LOT of growing to do yet though, so we'll have to see what happens.

The other good news is that the new planting is growing in really well. I've thinned the number of species down to just three, barring some stray odds and sods. I now have veritable forests of Eichornia azurea (including some transitioning to floating form - thanks again Marcel!), some Eichornia diversifolia which is just getting going but already looks fantastic and a load of what I think is Persicaria s 'Sao Paulo'.

Commiserations on the losses

Fantastic Tom...
Bad news about the infection, glad you managed to eventually get it under control.
For future reference was it any particular medication that you think made the difference?
Or alternatively what combination seemed to work?

Troi, I started out using Waterlife Protozin which has always been effective in the past. 2 weeks of daily dosing didn't shift it, after which I did 9 days of Esha Exit. By this point things seemed to be getting better but that coincided with having already lost all the neons, which were the most heavily affected. I then switched back to Protozin for about 5 or 6 days by which point out had gone. I did large water changes whenever the catfish started acting stressed, but was using slightly higher than recommended doses.

The spot seemed pretty resistant to both meds, I doubt either would have cleared it up while the neons were still in the tank.

Thanks for the info Tom...sounds like a very stubborn infection and pretty virulent, wiping out your neons as it did; a great shame.

awesome video and tank, as usual. It is really amazing the flow you have in such a huge tank... Don't know why but I imagined something closer to the Bucket O' Mud.
Sorry for the losses

Hi BigTom, Im sorry about the loss, hope you are out of that episode and the tank is back to normal. waiting for updates..

Hi Tom, since you mention it a few pages (and months) back can I ask if you have anything documenting your marine nano? Since you are my planted-tank idol I'd really love to know your approach to that. I have a 60l Dennerle cube at the moment which is in serious danger of becoming a nano reef.

btw when I studied at Falmouth Art College 16 or 17 years ago Carnon Downs was my LFS. Exciting fact for you.
M

I was wondering how your Eichornia was doing.. Somehowe i totaly missed all this, never got any notification on this thread. No idea why.
Anyway, it is all looking very nice

. Very happy it worked out for you. My Eichornia experiment completely failed. Realy awsome idea that poster of the stream above this tank.. How about a Bob Ross style wall painting?..

Hi Tom - just read through most of the last 22 pages and just wanted to add a few words of appreciation and gratitude. I'm sure youve inspired many people with the beauty of your natural aquaria, (this and others) but personally I'm still more inspired by the fact that youve created a mini eco-system in which so many different species of fish can thrive, behave and reproduce naturally. That it also looks spectacular - in all its stages (for me including the heavy tannin stained state) - is icing on the cake.

As a relative novice just a few years into the hobby, but with a long term goal of wanting to contribute something useful to conserving rare species when I feel I have the experience and skills to do so responsibly, its tanks like yours that give me hope that hobbyists can make a real difference - and that it doesn't have to cost a fortune to do so. Of course I appreciate that the outlay for such a "corner of morichal" isn't peanuts either . . . but it's within most hobbyists grasp, space allowing. In other words I see something like this and feel Ive got something attainable to aim at.

Though I realise it all happened a while ago now, I was gutted to read about your meds resistant Ich outbreak, so the other thing I'd like to tentatively add - simply because its worked so well for me - is the quarantine procedure suggested by Cory McElroy, owner of the Aquarium Co-Op fish store in Washington state. Specifically his use of a product called Ich-X made I believe by a division of Hikari. He has stated that this has become his "go to" Ich medication because he's not found any "resistant strains" when using it. Which is not the same as saying that every fish is robust enough to recover of course. Its just his experience having treated tens of thousands of fish every year over the past ten years I think.

I apologise profusely if this suggestion seems in anyway patronising, I only do so because for me his approach prompted a radical shift in my own thinking: Seeing a quarantine period as an opportunity to do something more pro-active than just feeding fish up and waiting for problems to develop, while hoping they didn't. I've come to completely respect Cory's premise that given how even the most reputable wholesalers operate, given the high likelihood of exposure to pathogens, and given the endemic nature of parasites in wild-caught fish, its better to assume that even the healthiest looking fish is carrying something nasty than to try to feed them up and wait and see. All the meds are obtainable in the UK through Vitamin Grocer.

Thanks again for sharing your stunning aquarium.