lazybones51 said:
Scape is looking great! How are you getting on with the new filter? I was thinking of getting one but saw a couple of threads where people had issues.
Click to expand...

Thanks lazybones51, the filter is great, not had any issues with so far, the pre filter seem to be doing it job and is relatively easy to clean, the filter itself is really quiet, so no complaints so far .
Steveo
A Long Start, another Iwagumi story

Scape looks great mate seemed to.have missed updates on this but was nice to catch up

Thanks Jay, hope your new set up is progressing well.
Steveo
A Long Start, another Iwagumi story

Been a while since my last update, experiencing quite a few issue of late.

HC is turning brown near the surface, I've already removed one clump that breached the surface, this area has the most flow so shouldn't be a issue related to lack of C02, it is also closest to light so might be too much intensity? Any suggest would be great. The Hc in lower section seem to be doing fine. 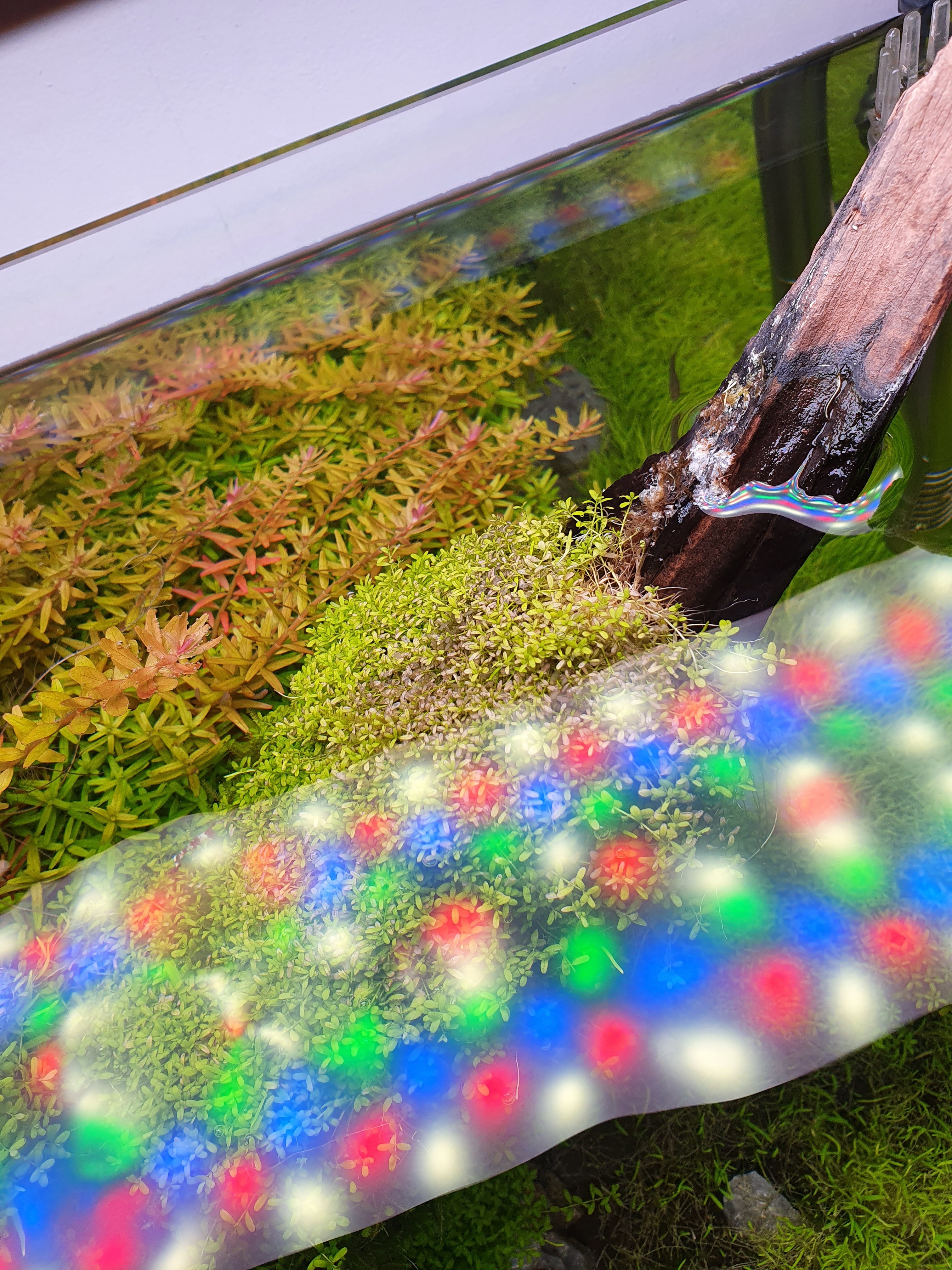 Also suffering from a bad case of hair alge, but only in the UG carpet, I've recently trimmed back the carpet heavily in bid to get rid of most of the effected areas and added 3 horned nerite snails as read they eat hair alge. Thou since dropping them in I've only seem them on glass . These guys are super tiny probably could have got away with a few more of them.

The Hydrocotyle sp, was also trimmed back heavily, revealing alot of yellow/pale leaf, which I going to have to remove. 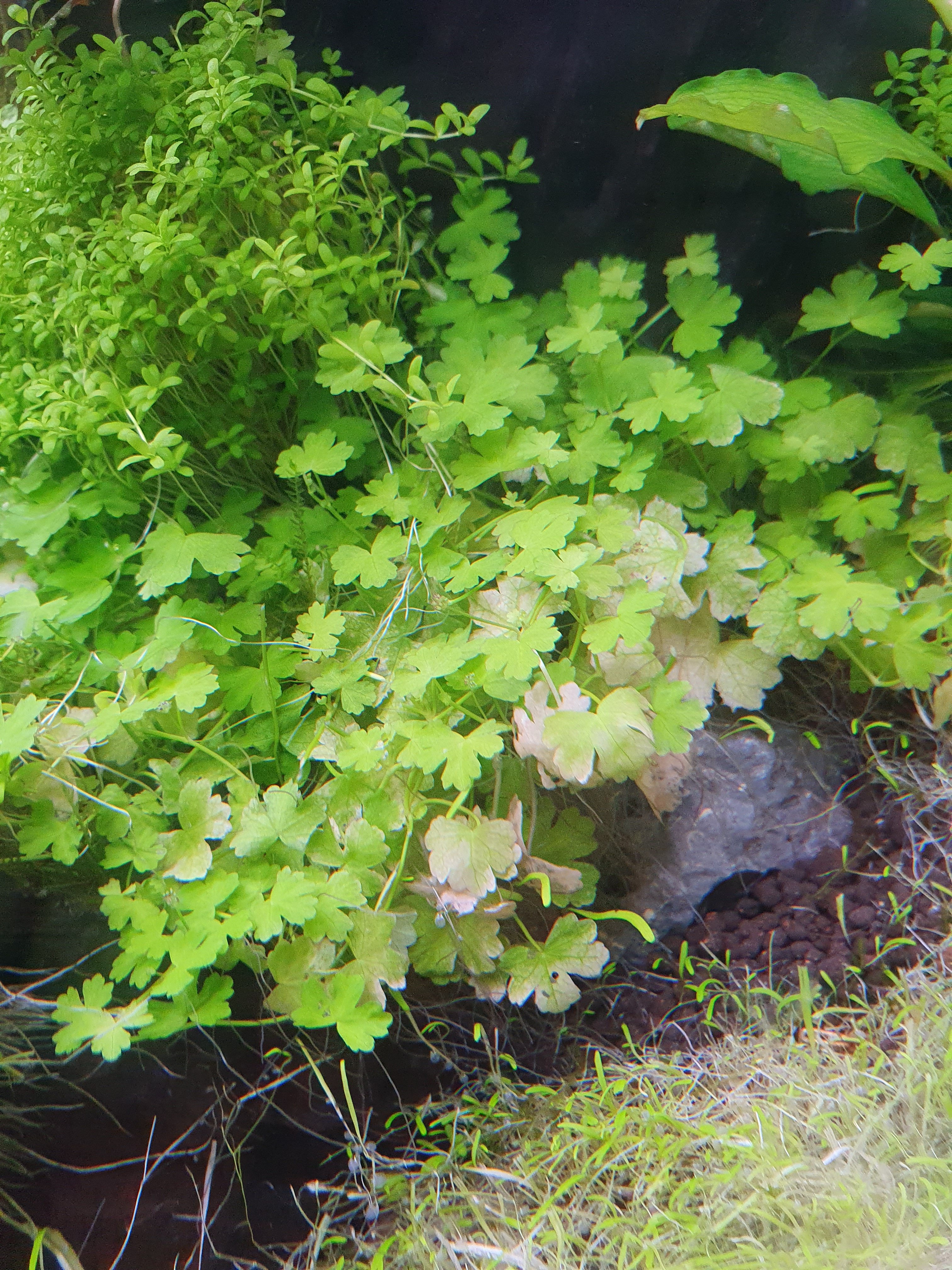 The weeping moss seems to be growing everywhere, particularly amongst the UG carpet , I've tried to remove the cutting when trimming but it almost impossible to get ever single piece, I seem recall saying to myself I would never use moss in any of my scapes ever again in the previously, now I recall why .

I have had some issue with flow so had to put the pump back in the tank.

I think my plant are starting to show some nutrition deficiencies, as still not dosing any nitrates, I may need to review my dosing regime. 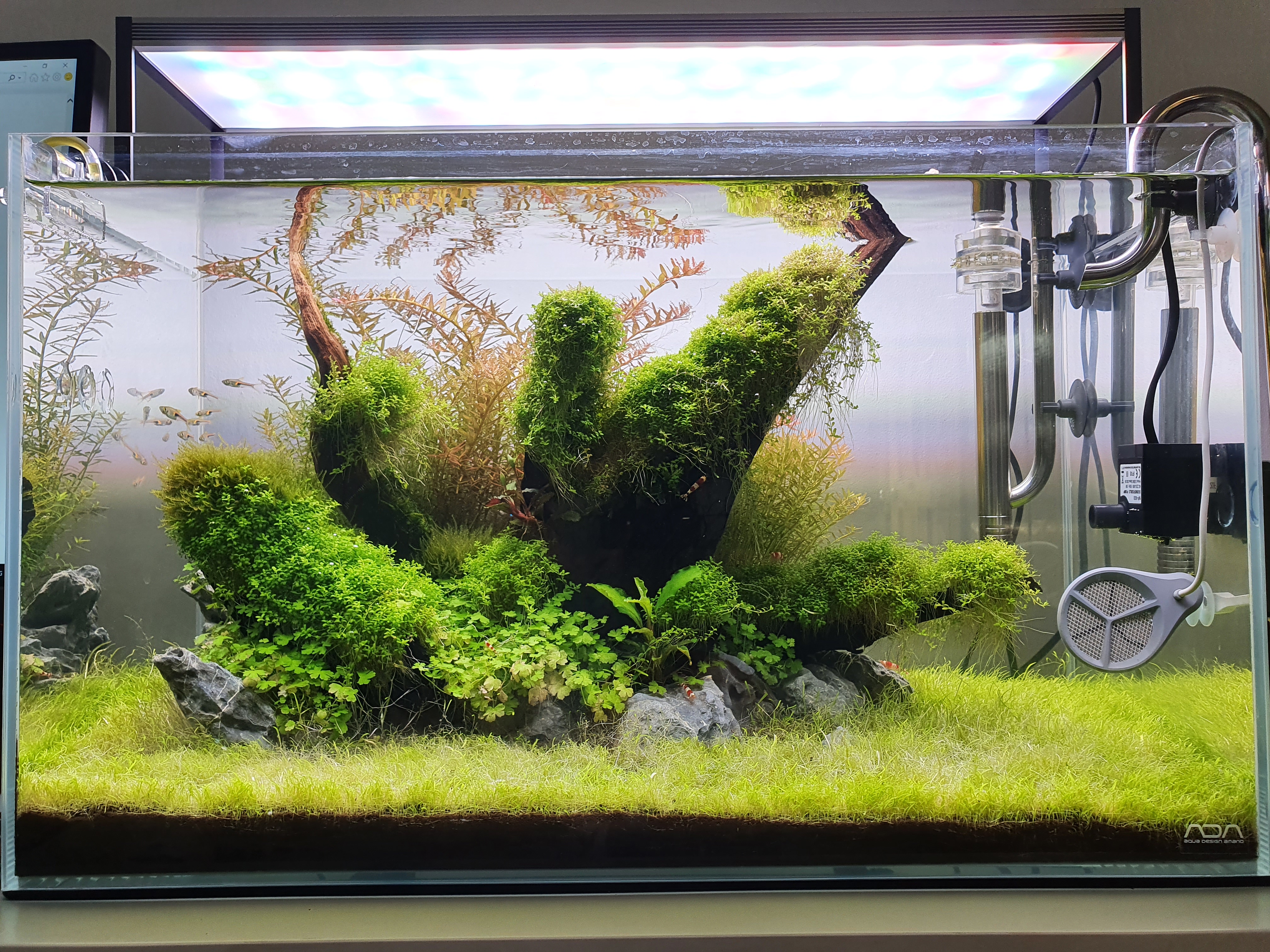 Thou on a happier note have finally added fish! I've recently added x10 Glowing Rasbora, which seem to school which is fun to watch, I ve also added x6 lovely young Sparkling Gourami, can't for these little fellows to colour up. I've read these guys can be noisy but they yet sing for me, thou they are only young , so may need to mature abit first. I also x10 Chill Rasbora on order, which should add abit more colour and energy.

The cherry red are still doing well, and breeding, as seen a few baby shrimp in there. 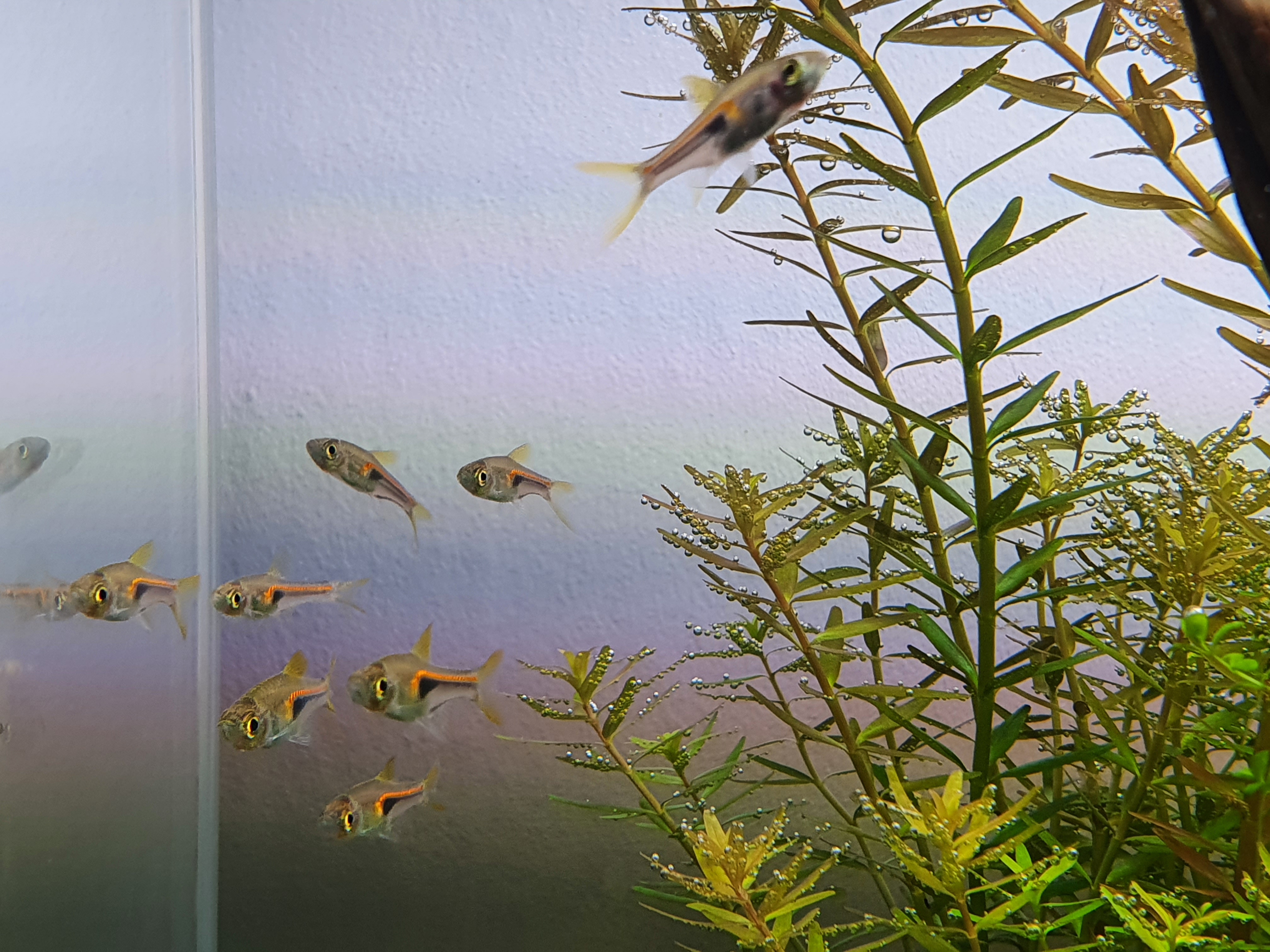 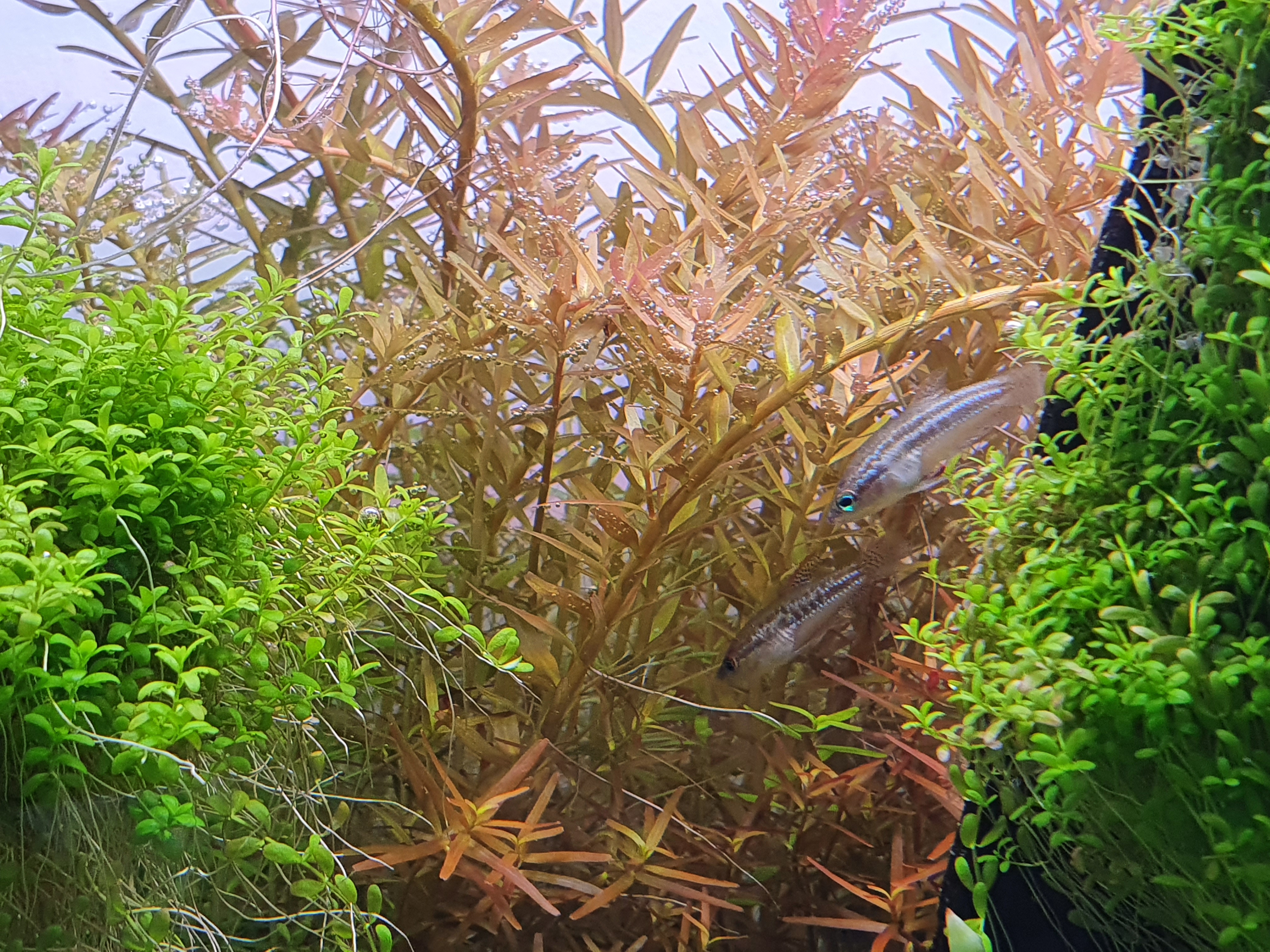 Despite the scape not looking its tidiest, still enjoying looking at the scape particularity now that I have some fish in there .

Thanks for looking.
Steveo
A Long Start, another Iwagumi story

hope someone comes on to help you with the issues as you say maybe to much intensity or a lack of a nutrient but someone else will know better.

Sent from my SM-G970F using Tapatalk
Thanks Dean

Deano3 said:
Looks good mate and i previously said the same about moss and ended up with it again

hope someone comes on to help you with the issues as you say maybe to much intensity or a lack of a nutrient but someone else will know better.

Sent from my SM-G970F using Tapatalk
Click to expand...

Thanks Deano3, I love moss but it such a nightmare when it gets out of hand, guess I'll never learn

If it's Twinstar light you could try dimming it and see if things improve, should lower nutrient demand.

It been a while since I provided an update on the tank, and things have changed around alittle... 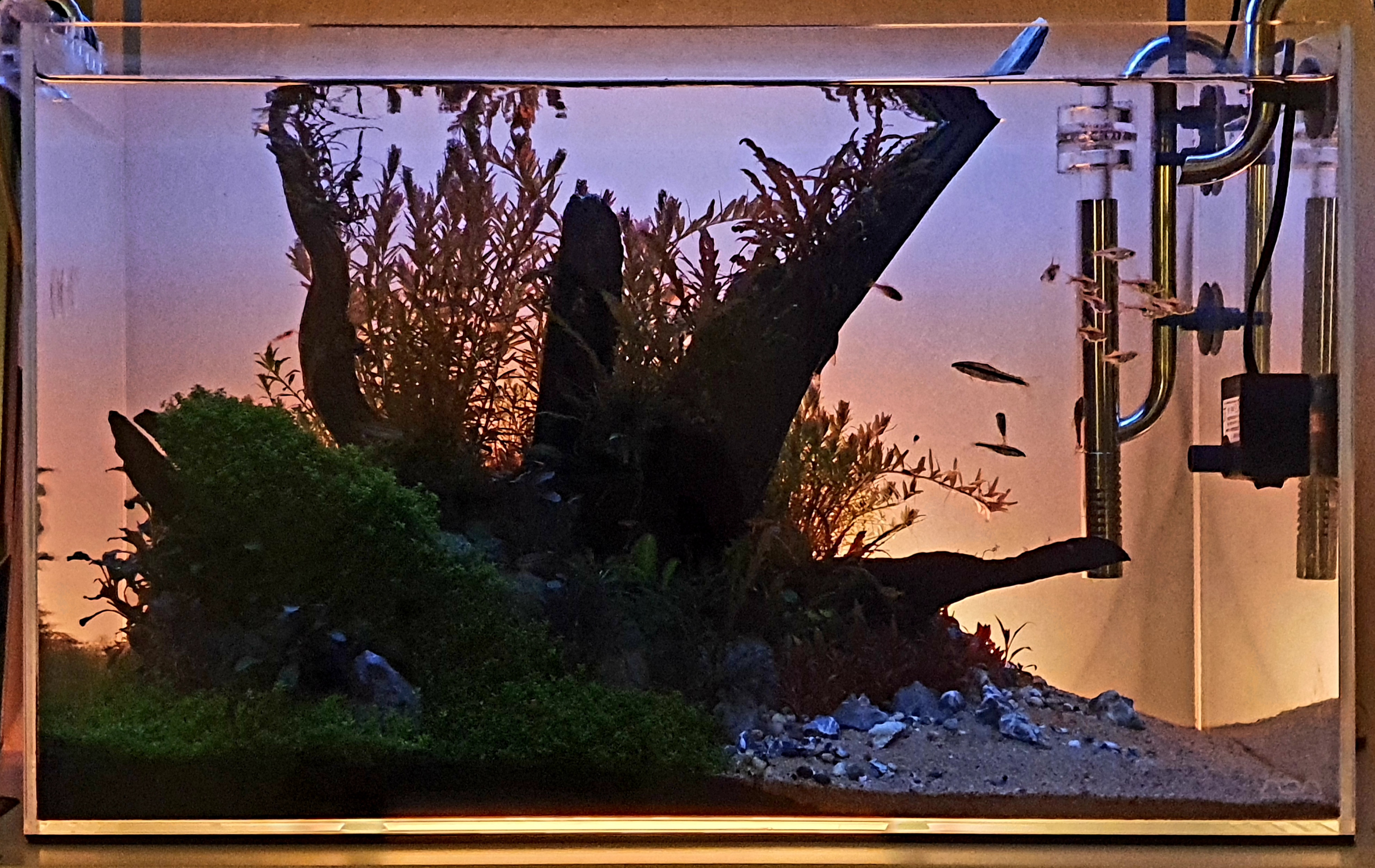 I've taken up the Ug carpet as it wasn't really recovering, the moss was actually out growing it, and it just didn't look great. So i replace it with the cuba carpet I had originally attached to driftwood. On the driftwood I attach quite a bit of hygrophila pinnatifida, which seem to be growing quite well, I also planted a load of Bruce's in the stones mixed in with some more pinnatifida. I've also added an area of cosmetic sand over the old substrate, I used a layer of floss to keep the old substrate and seperate also help keep the sand in place as it banks up. Quite liking the cleaner look. I add some crush up stones to hopefully provide a more nature transition. I've also recently planted some alternanthera reineckii mini to provide abit more colour. 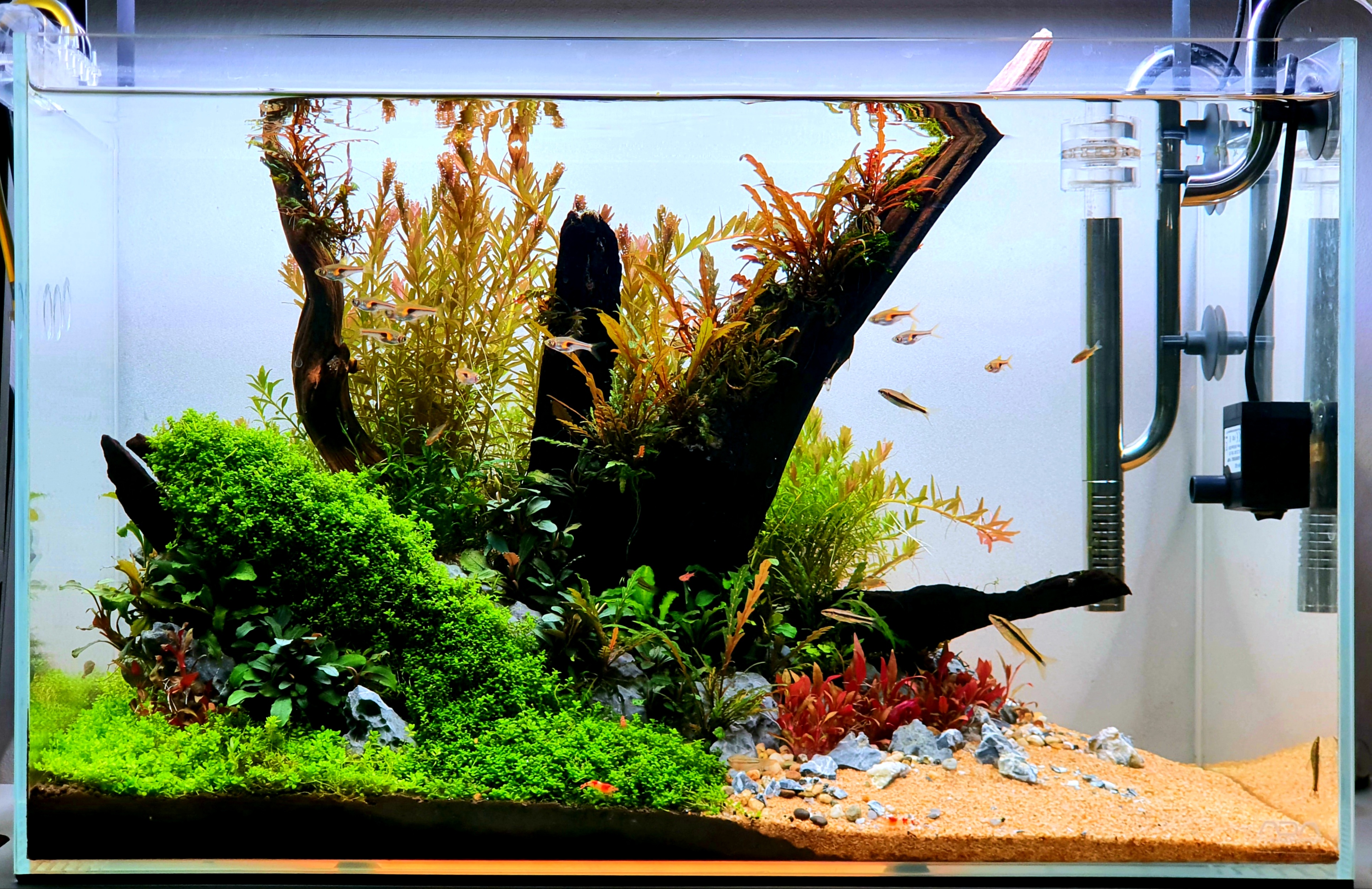 Although you cant really see them all in picture above, there quite a few fish in the tank now. Really loving watching them swim around in particular my 6 sparkling gourami, they really quite colourful. 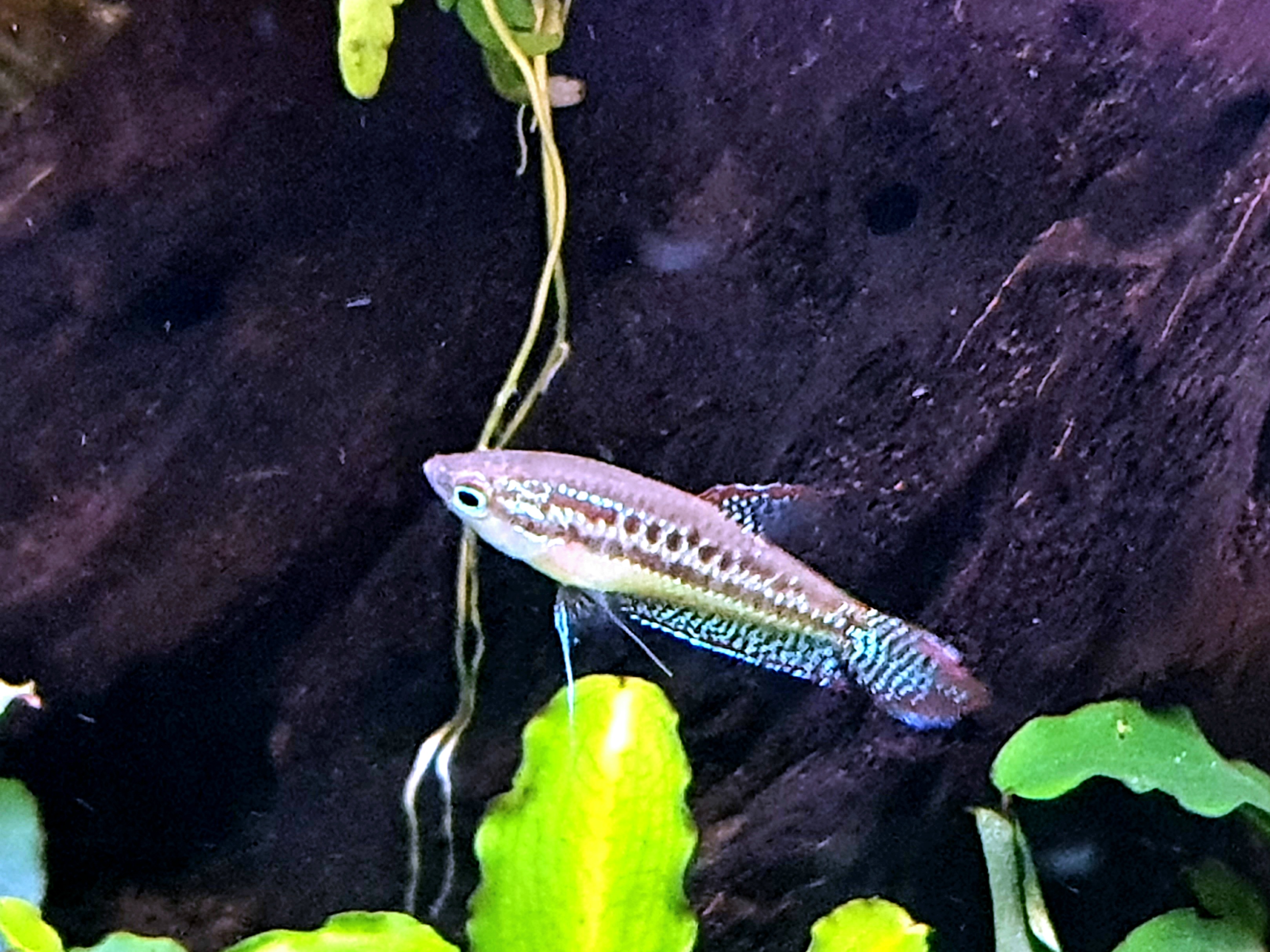 Thanks for looking...
Steveo
A Long Start, another Iwagumi story

Very cool. that splash of red on the left is probably not needed; otherwise very nice colour depth.
From Sydney , Australia

rebel said:
Very cool. that splash of red on the left is probably not needed; otherwise very nice colour depth.
Click to expand...

Thank you rebel, the alternanthera reineckii mini on the right were a recent addition as the sand area dud looked alittle bare against the planted area on the left. The intention was to use a plant that added abit of colour but I can kinda see what you mean, it dose feels alittle unbalanced perhaps need move a few more of them to left side of the scape.

I like it, it has a very "warm" feel to it.
You must log in or register to reply here.
Similar threads