***WARNING*** This journal is likely to contain any, some or all of the following: mud, dirty glass, terrible typing, horrible crawly things, really boring fish, algae, piles of rotting crap, bad photography, drunken ramblings, non-existent aquascaping, total disaster and complete disregard for all advice given. Also, plant growth and updates are likely to be extremely slow and sporadic. Read on at your peril!

OK, so I got that out the way

Herein lies my attempt to create a self-sustaining, ultra-low maintenance, sort of riparium tank which I can leave for 6 weeks at a time every few months while I'm on fieldwork without worrying about getting people to do anything other than chuck some more water in occaisionally.

Hardscape:
Some rocks
Fired heather collected from the pentlands


Fauna:
Currently - cherry shrimp, Daphnia magna and any number of weird slimy things
Planned - more slimey things, and a group of either licorice gouramis or badis. Possibly Hara jerdoni and some sort of micro rasbora, depending on how the food chain holds up.

Setting up:
So I basically chucked the substrate in, plus some bewildered houseplants from homebase and some very sad looking aquatic plants that had got lost for a week in the snow, filled with water and went away for 3 weeks. Came back expecting some sort of horror show but was rewarded with a mere smattering of green and brown algae on the glass and some hydrocotyle that had actually managed to grow a bit. Hydrocotyle is now automatically my favourite aquarium plant!

Have now replaced frost-bitten plants with a fairly random assortment of others, just to see what will do well. A large amount of mud has settled out of the water, I've left it where it is for now because I'm considering a bit of a rescape and various other upheavals.

Added 50ish cherry shrimp and a small pot of Daphnia, both of which are now happily breeding away, thanks to the beatifully green water

Here is a mysterious and flaw-hidingly underexposed sneak preview - much will change in the coming weeks, so don't get too attached! 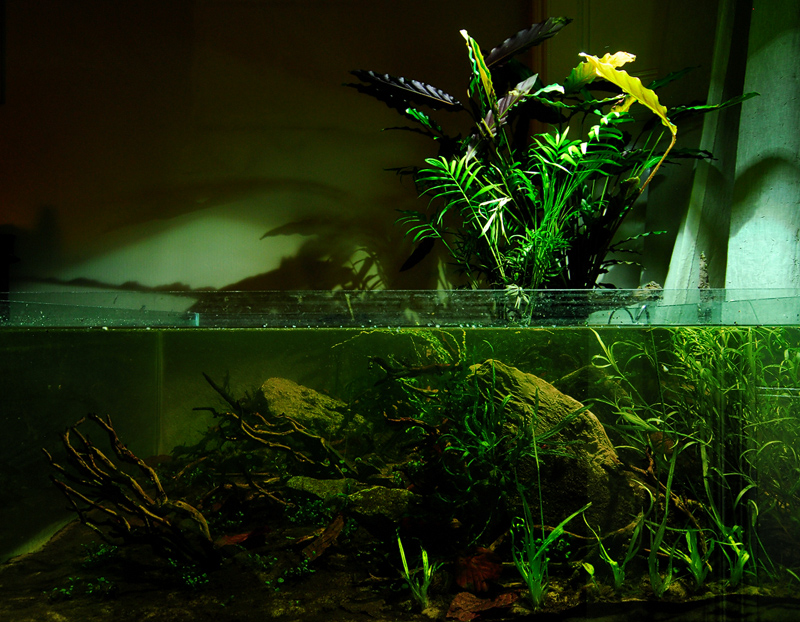 looking forward to seeing how this one turns out... inspiring idea... picture looks good.

I use heather wood too... good/cheap/local alternative wood

Currently no filter, I do have a koralia powerhead in there which I turn on every now and then to break up the surface biofilm, will probably convert it to a mattenfilter when it's ready for fish.
Poco Pozo
Bucket O' Mud
Landscape Photography​

Noticed an interesting thing actually. The water only turns green when I leave the light off during the day. The daphnia only swim up to feed during daylight, so it seems that even ambient light is enough for the algae in the water to multiply but it generally goes unnoticed as its quickly consumed by the daphnia.
Poco Pozo
Bucket O' Mud
Landscape Photography​

Glad to see a journal up for this Tom.
I'll be following how it is going

Got a bit of a question about flow.

In a non-injected shallow tank (about 25cm water), would I get better co2 levels having a surface ripple to keep it in equilibrium with the air, or keep the flow deeper so that co2 generated from stuff decomposing doesn't escape? Suspect this may vary according to whats in the tank, but opinions welcome.
Poco Pozo
Bucket O' Mud
Landscape Photography​

Well, things are coming along, it's about 3/4 planted and is looking pretty lush, bar the foreground. The glosso is spreading but incredibly slowly (1 pair of new leaves per plantlet per week!). I'll give it a month or so and see how it looks, might swap it for something that does better in low light though.

Some quick snaps of the progress:


Had a bit of a distaster on the livestock front - was moving around the emergent plants and the shrimp suddenly went mental - total lack of motor control, violent jumping movements and rapid death. Lost 90% of the shrimp and 99% of the daphnia in the tank in the time it took to do a 90% water change. At the moment I'm suspicious of one of the plants releasing toxins if I broke some roots or something, but I'm really not sure. Don't want to restock until I've narrowed it down and removed the culprit (the large prayer plant is no. 1 suspect at the moment). Plenty of other microfauna seems to have survived though.
Last edited: 5 Jan 2015
Poco Pozo
Bucket O' Mud
Landscape Photography​

Wow! Despite the brilliant disclaimer at the start, this looks great!

The wood in particular is very well done - unique but natural at the same time. Rare to see these days.

The emergent growth is spectacular. Can you list the species, please?

Sorry for the loss of you livestock.

I really look forward to following this.

Absolutely love this Tom, great idea, something a bit different from the norm

Looking forward to its progress.

Your emersed growth is amazing! And I'm loving the scape too. Very unusual and reminds me of a desert scene or an end of the world movie scene. Bizarrely!

Thanks very much for the comments, feels good to have some positivity after the shrimp bit the dust.

As for the emergent plants, you'll all be very impressed to hear they're from somewhere as exotic as homebase! Can't be accurate with species as they don't lable them beyond 'foliage plants', but there's a large prayer plant (Calathea sp.), parlour palm (Chamaedorea elegans), peace lilles (Spathiphyllum sp.), and the other large lilly in the third pic which I've been unable to identify (haven't tried really!). They're slowly adjusting to being rooted in water, some better than others - the prayer plant has completely switched to submersed roots after a few weeks, the parlour palm is taking much longer and had a bit of a die-off but seems to have stabilised now. The others are more recent additions, yet to see how they cope. All planted in shower caddies with hydroton.

Oh, and the emergent sword in the centre is an echinodorus motherplant froma java plants, it was supposed to be Echinodorus cordifolius 'marble queen' but I think they sent something else in the end, which is a bit annoying. It's a decent size though.

LD, afraid I'm lacking easy video capabilities at the mo, but when its closer to being 'finished' I'll endeavour to capture something using webcam and laptop.
Poco Pozo
Bucket O' Mud
Landscape Photography​

Do you have any pics of the shower caddies and hydroton being used?

If you've lost that many shrimp I'm sure as long as some remain it won't be very long until you have a tank full once again.

Have your homebase plants grown in height or filled out since planting in water? And is your water surface very disturbed or calm?

************* I see you asked the question a few posts back and didn't get a reply, but I'm curious on that one too. With a non CO2 tank is it best to really agitate the surface to utilise CO2 from the air or is it best to leave the surface unbroken and use what CO2 there is in the tank as well as this stuff they call rubisco that the plants will produce to make up for lack of CO2 available?***************

If the emergent plants prefer calmer water, which I've read elsewhere, that might be your decider on this. And if that's the case it may be good to have an airstone or curtain infront of the output to circulate Oxygen.

Can get a pic tonight, the caddies are the ones available from amazon in various sizes, I have one of the larger ones and 3 of these - http://www.amazon.co.uk/dp/B0014XQC90/r ... nkCode=asn

The hydroton I just got from my local hydroponics shop.

The prayer plant seems to have adapted well and defintely started putting out new growth after about 3 weeks acclimatising. The parlour palm has been less rubust and about 1/4 of the stems died off in the first few weeks. It has stabilised since then and seems to finally be changing root type, but I wouldn't like to say its defintely growing much yet. The others have only been in a few days, so too early to say but both types are known to do OK in ripariums. From what I've read it generally takes a few weeks for even the most well suited houseplants to adapt to riaprium conditions though. Will just have to see long-term how they do.

The general consensus in el natural tanks is to keep the water still to conserve the CO2 produced from the breakdown of organics at substrate level, but I'm not sure it'll really have much effect in a tank with such a huge surface area:volume ratio (9 square feet for around 200L). At the moment I have a gentle ripple to help break up the surface biofilm, but I'm not convinced yet one way or the other re: co2.
Poco Pozo
Bucket O' Mud
Landscape Photography​

This is such a cool journal.

I'm planning a smaller scale set-up like this in the future, and already I have learnt lots!

Will do George, glad you're enjoying it. It's quite interesting seeing the tank evolve, already it is very different from how I had envisaged it at the start.
Poco Pozo
Bucket O' Mud
Landscape Photography​


BigTom said:
Will do George, glad you're enjoying it. It's quite interesting seeing the tank evolve, already it is very different from how I had envisaged it at the start.
Click to expand...

I think that's part of the magic of a planted tank, especially when you're trying out new stuff.

I've never grown emerged plants, so it will be a huge learning curve for me. Brings back some of the excitement I used to get!

Great to hear so many decent plants available in Homebase and the like. I will never see these places in the same light again!


BigTom said:
The general consensus in el natural tanks is to keep the water still to conserve the CO2 produced from the breakdown of organics at substrate level, but I'm not sure it'll really have much effect in a tank with such a huge surface area:volume ratio (9 square feet for around 200L). At the moment I have a gentle ripple to help break up the surface biofilm, but I'm not convinced yet one way or the other re: co2.
Click to expand...

I'm also not convinced. I've tried both and never noticed a difference. So I also go for breaking the surface as it keeps it clear and clean.

In low techs I often find I suffer from crypt melt when I add new plants. So now when I add new plants I do a heavy trim so that the overall mass stays the same. No more melt I mention this as I suspect it is co2 level related. i.e. if the plant mass increases the co2 demand also increases. If this change is gradual (i.e. from plants growing in), the plants can adapt fine.

Hi Tom,i can see your eye for composition in photography has been used very well for this layout,very impressive indeed

,i love the plants flowing over the top and the wood placement is great,