It's been a long time since I've been on UKAPS actively but for obvious reasons (and an injury) I've had a lot more time to devote to my aquarium.

Some of you might remember my first journal 75 Gallon Tidy Jungle which was a low energy, densely planted setup. It was really successful but after some neglect the design ended up changing drastically. After 4 years I've also hit an unavoidable wall; my substrate has turned to mud. Whilst the Cal Aqua Labs substrate was great initially, like most aquasoils it's decomposed and has become so dense the plant roots can't penetrate it and are ultimately suffering.

My plan is to do a 'rebirth' if you like. A complete rescape and I'll be changing everything, keeping some plants from the current scape. There's not much to show right now but it's nice to be back!

Welcome back
Can we look forward to a new journal?
.
Aquazeitgeist. YouTube
A Brief and Incomplete History of Aquascaping. Soil Substrate Planted Tank - A How to Guide
Schism Reimagined. NatureScape. Return of the Shallow. Windswept Eternity, Primordial. The Dark Side or What Lurks Beneath

Tim Harrison said:
Welcome back
Can we look forward to a new journal?
Click to expand... 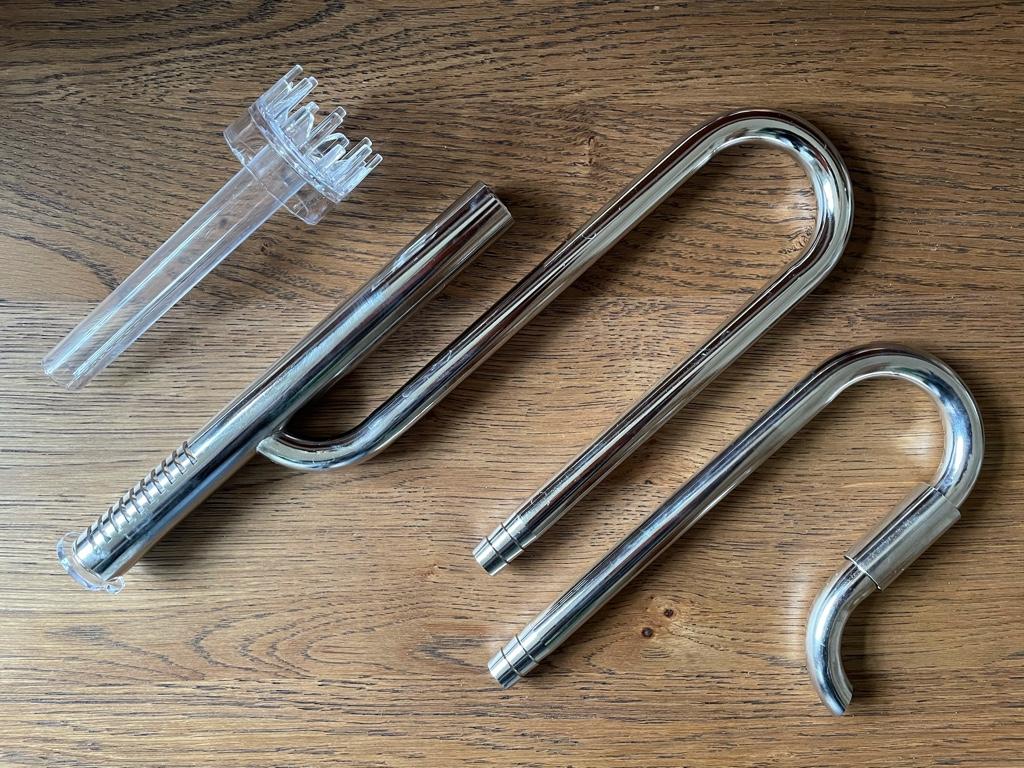 Bits for the rescape are slowly trickling in. I've got two external filters so I'm replacing one inlet/outlet with these stainless steel ones. I'll get another one in due course.

I like how the glass lily pipes blend into the scape but I didn't want to risk breaking it and I know they get visually dirty much quicker. Also there's just something about the steel that looks premium, almost steam-punkish! 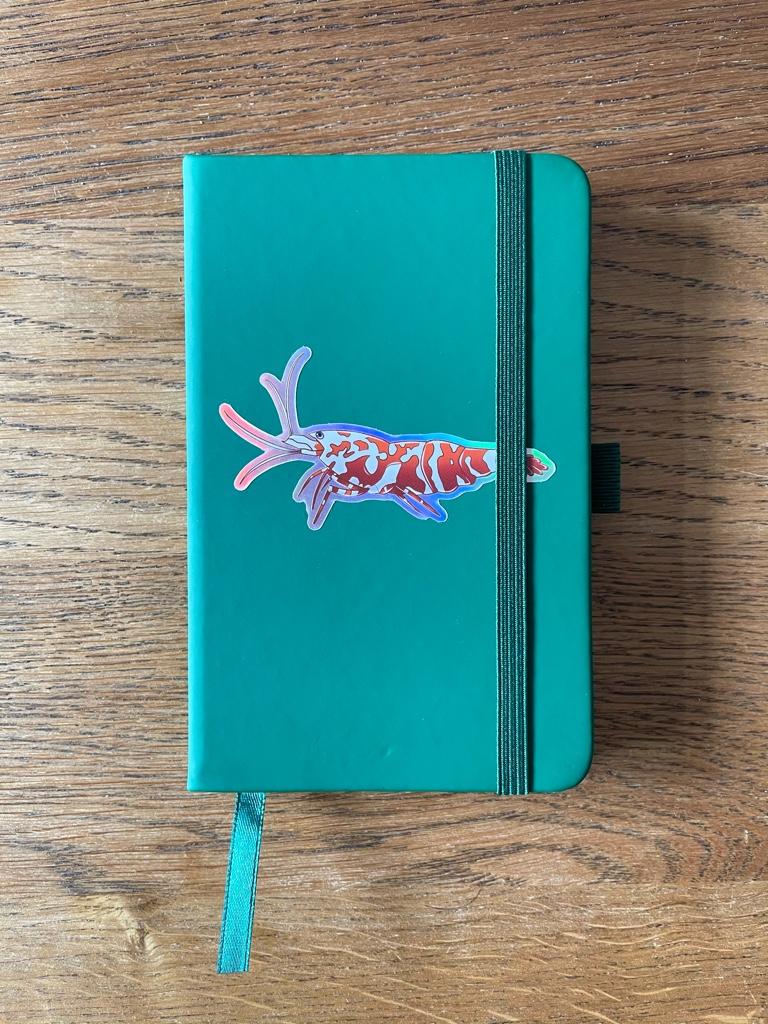 The hardscape is all here now, only thing left is the plants! Hopefully they come through soon.

I also got myself a little notebook to keep a weekly journal of the cause and effects in my effort to balance the tank out. Helps with my memory too haha.

Are you going low energy again or high(er) tech?

I have to admit I've been tempted more than ever to get a CO2 setup but I feel like I'm gonna cause a catastrophy. It also doesn't fit into the fact that I'm the type of person to go on holiday for a month. But I'm very tempted...maybe someone can reassure me.

So I went FULL NERD today.

Decided to build an aquascaping dojo out of the box my mattress came in. It's really sturdy cardboard so I lined the bottom with plastic to prevent any leaks. Out of pure luck, it's almost the exact dimensions I'm going to be scaping with!

The design was given to me by Aquarium Gardens but I changed some parts of it as I'm using less of/different type of rock. I wanted the branches to be a bit tighter and look similar to the roots of a single tree. I also wanted a much steeper incline with a very very shallow area at the foreground and right hand side. The design in the pictures is not final because a lot of the rocks I'll be using are still in my current scape and won't be moved until the day I start. I just used enough rock to get a rough idea and hold the pieces steady.

I'm using Alfagrog 'haggis' along the back wall to create height (substrate isn't cheap lol). I'll put a very very thin layer of Unipac Black Micro Gravel over the haggis and then Tropica Substrate so it doesn't all fall through the holes. I'll then cap it all with the micro gravel on top.

I cut out some shapes to see where I wanted certain plants to go. Some of the placements will change based on plant success and if I think the hardscape is getting overshadowed. The idea is to have the base of the wood completely covered in plants so the branches are sticking out plumes of foliage, leaving the most prominent part of the branches bare (we'll see how achievable that is low energy haha). 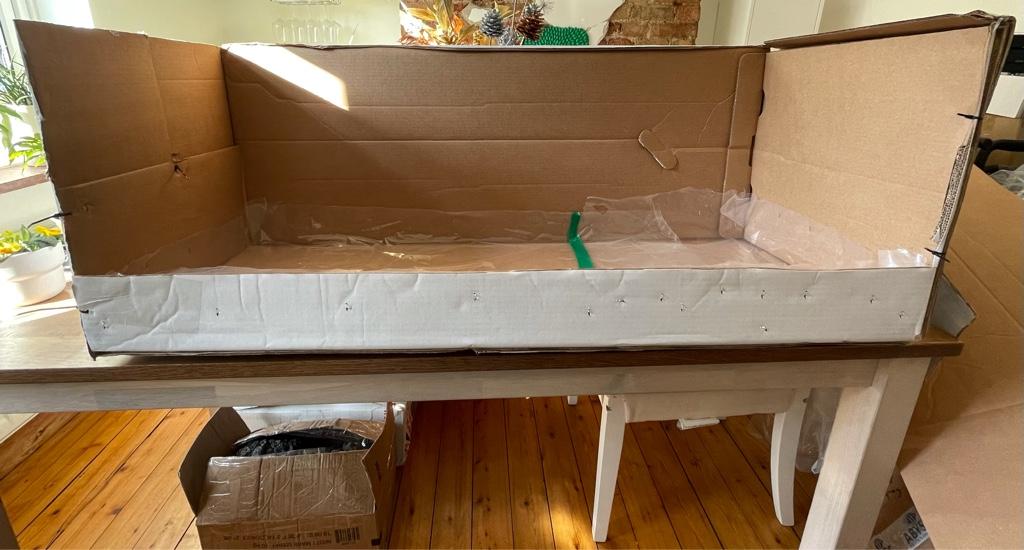 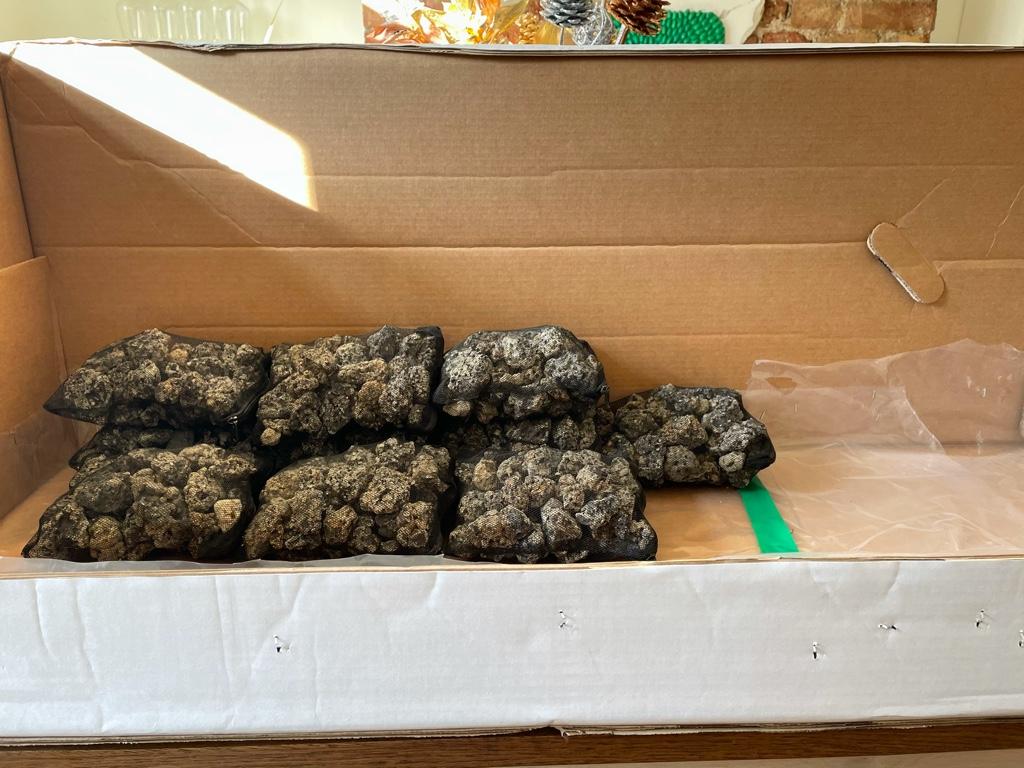 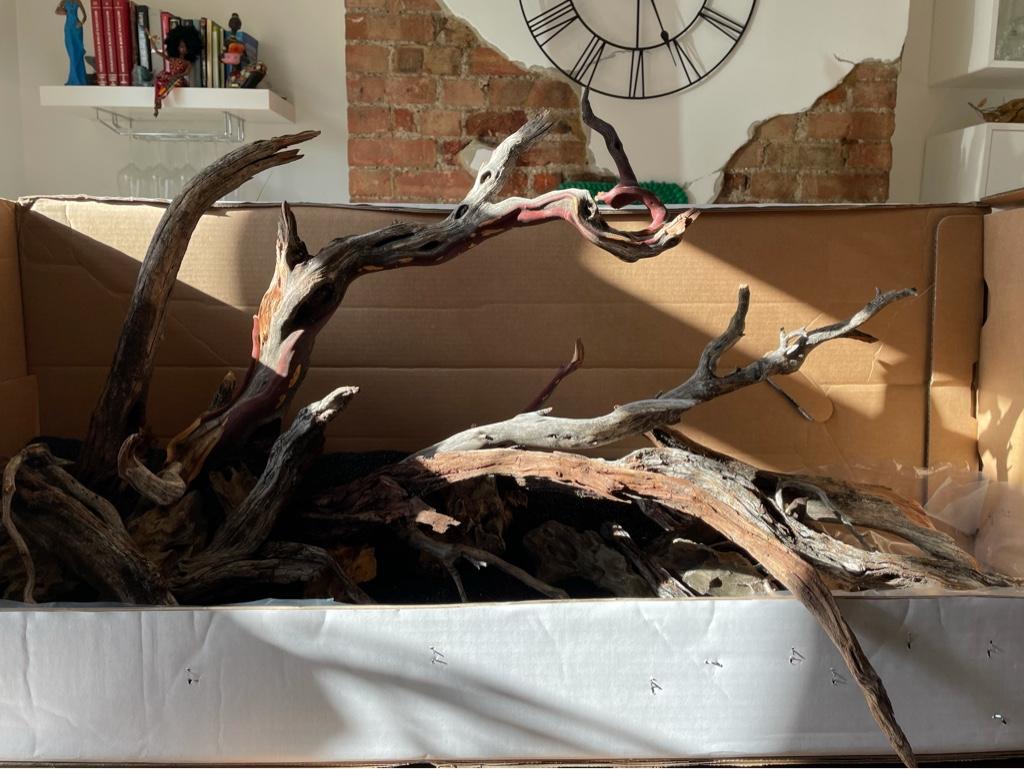 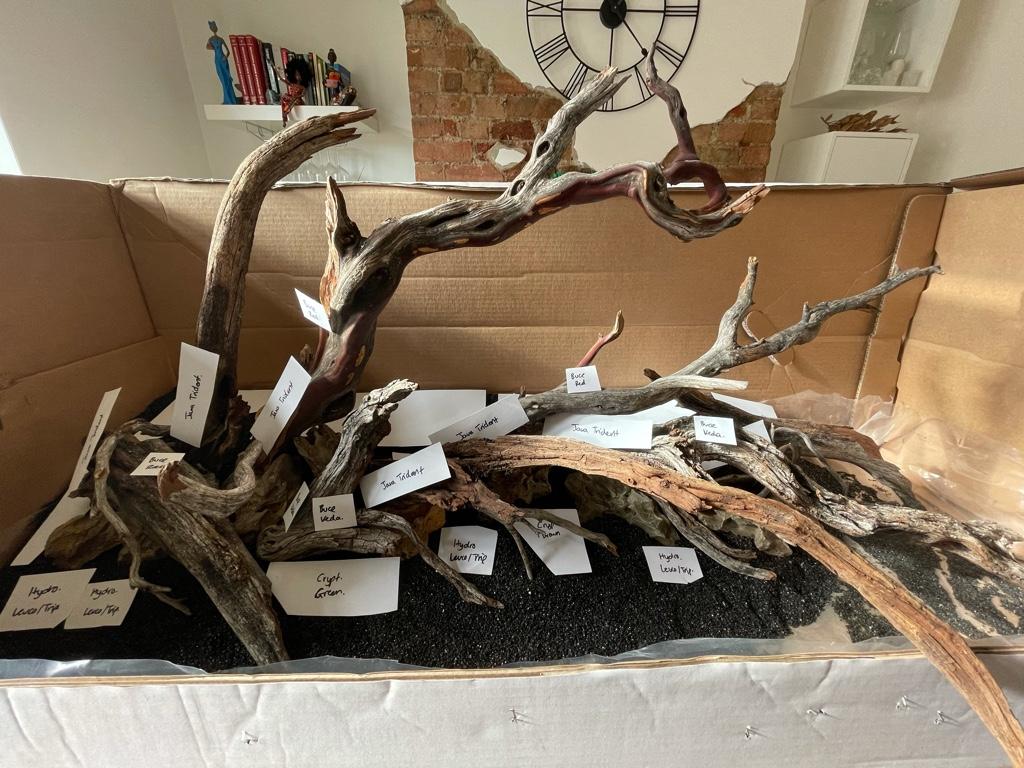 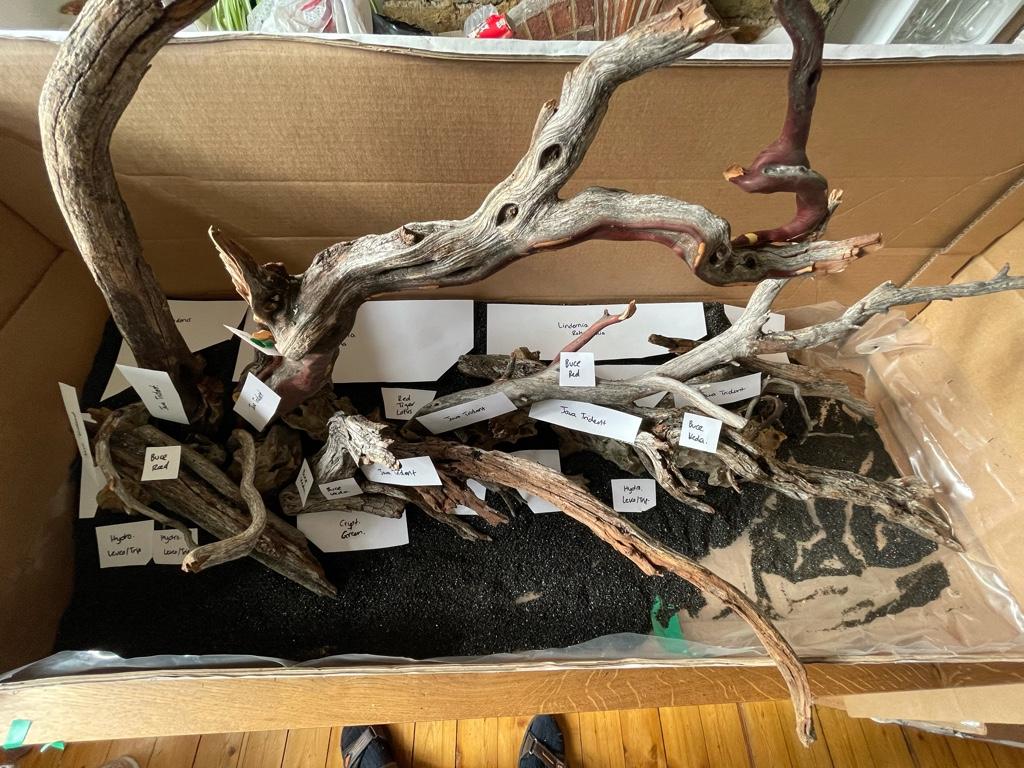 Looks nice, but what is your plan with the piece coming forward?

Wolf6 said:
Looks nice, but what is your plan with the piece coming forward?
Click to expand...

Thanks, the piece hanging over will fit in the actual tank as it's about 4 inches deeper than the box.

My current lighting unit is not so customisable. The tank is 2ft tall with 216w T5 HO (4 x 54w) a few inches from the water surface. I was running all 4 bulbs with reflectors and judging by the algae growth in the setup I'm about to rescape, it was way too much for low energy. I've since removed the reflectors and I'm only running two bulbs (108w).

Do you think this would be sensible for low energy? Too high still? Too low? I know it's better to observe than speculate but just wondering what other people's thoughts are.
Instagram - Tidy Jungle II Pico Pond Salty Fingers The Edible Scape

In my boredness of waiting for plants to arrive I decided to have a little play with the hardscape again. I came up with this new island style design and I think it's actually a lot more dramatic and eye catching.

The photos don't really do it justice at all but from what you can see what's your thoughts? Which do you prefer? 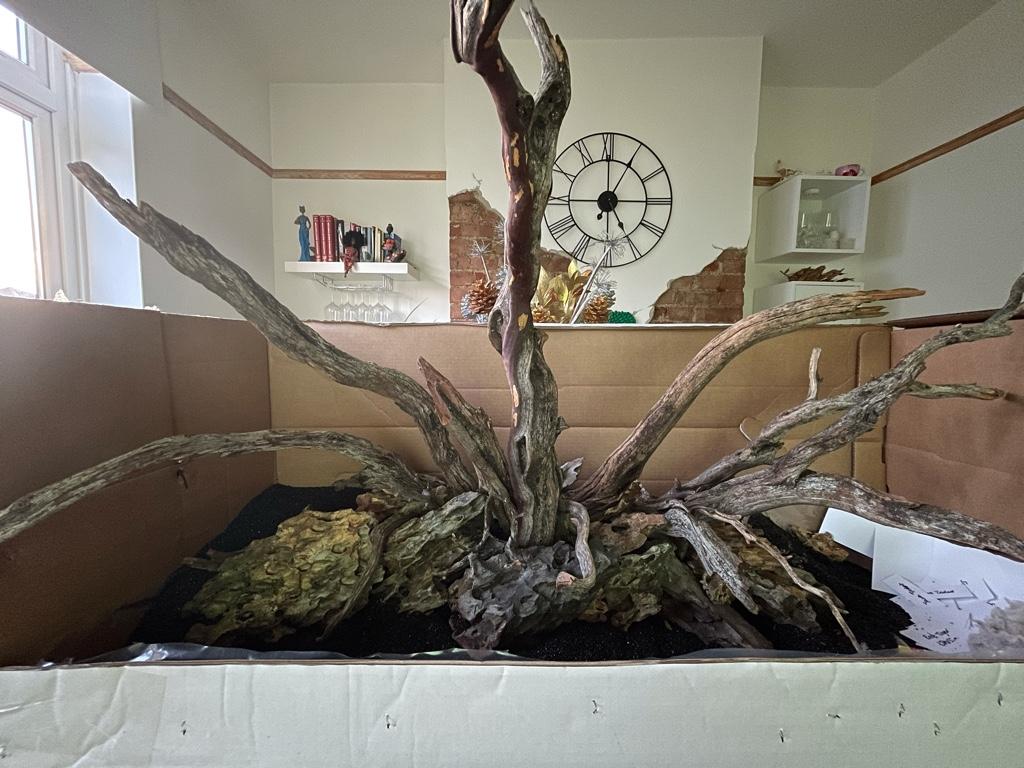 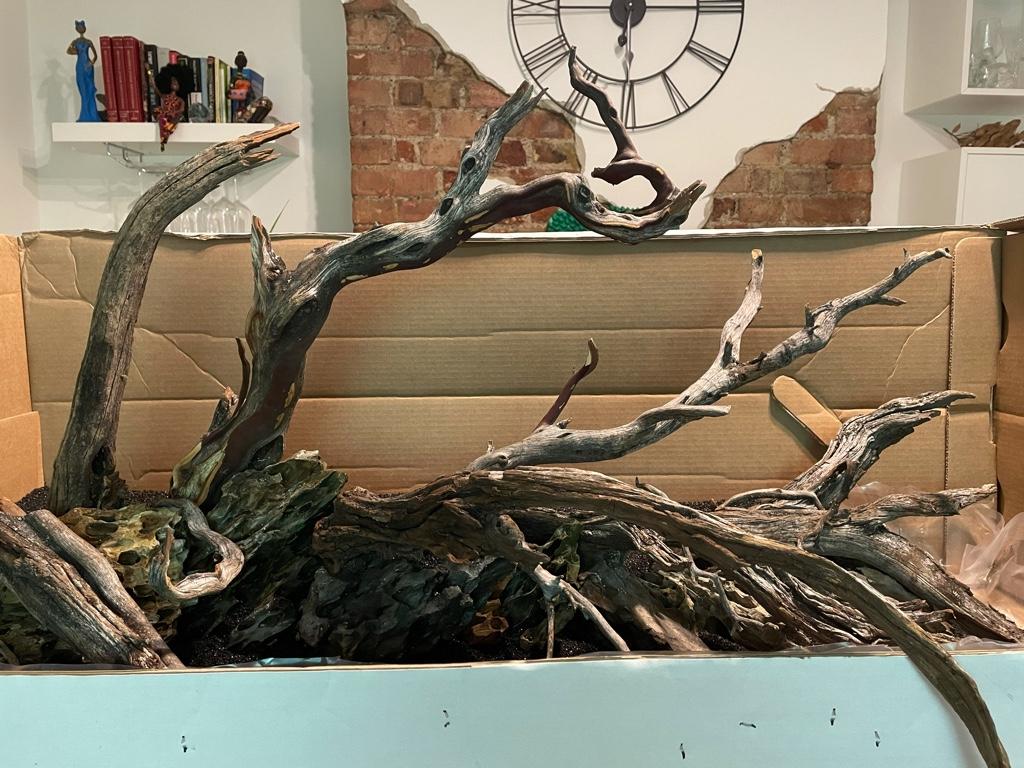 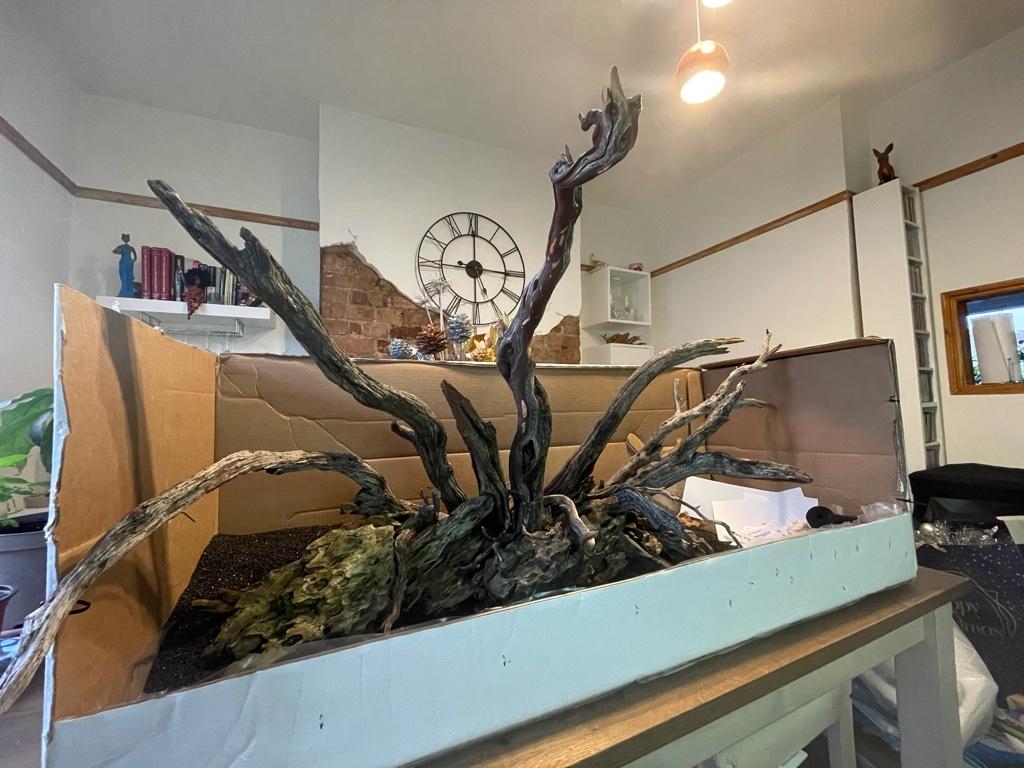 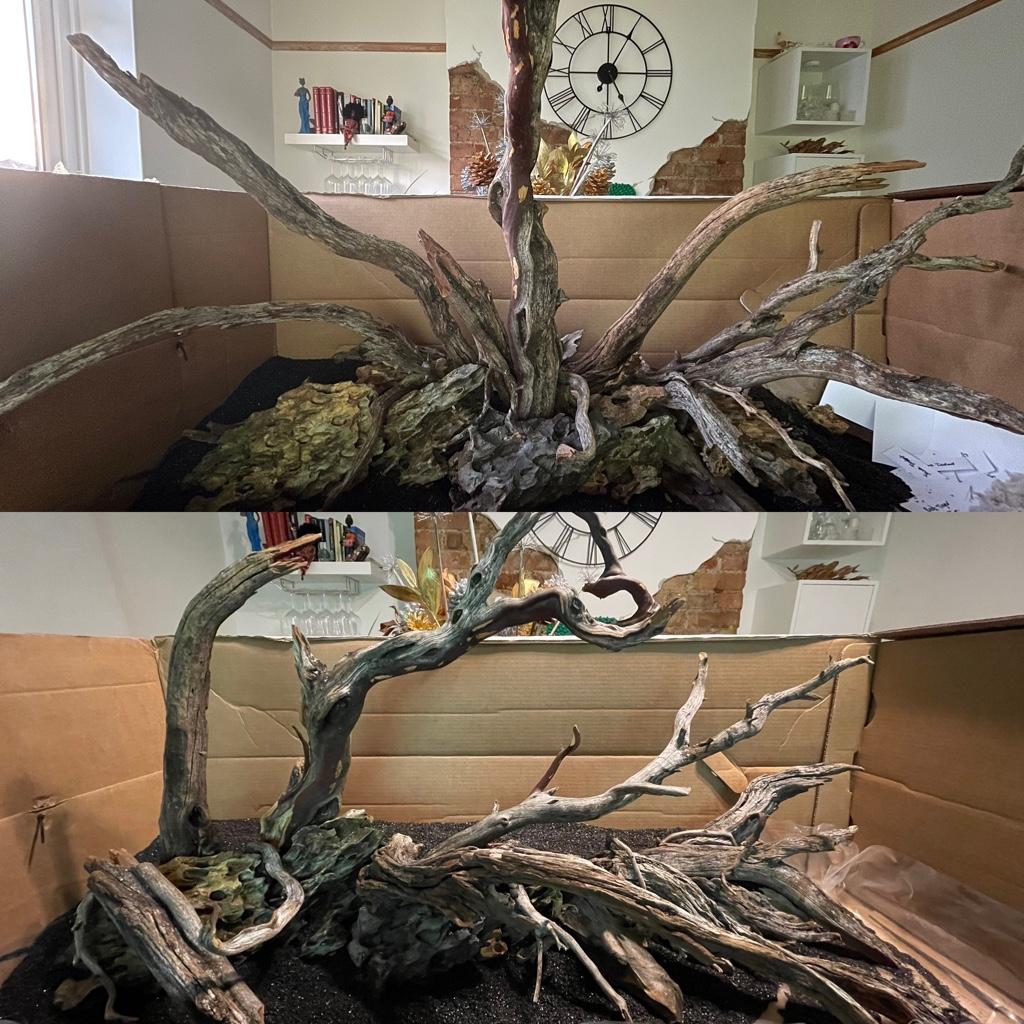 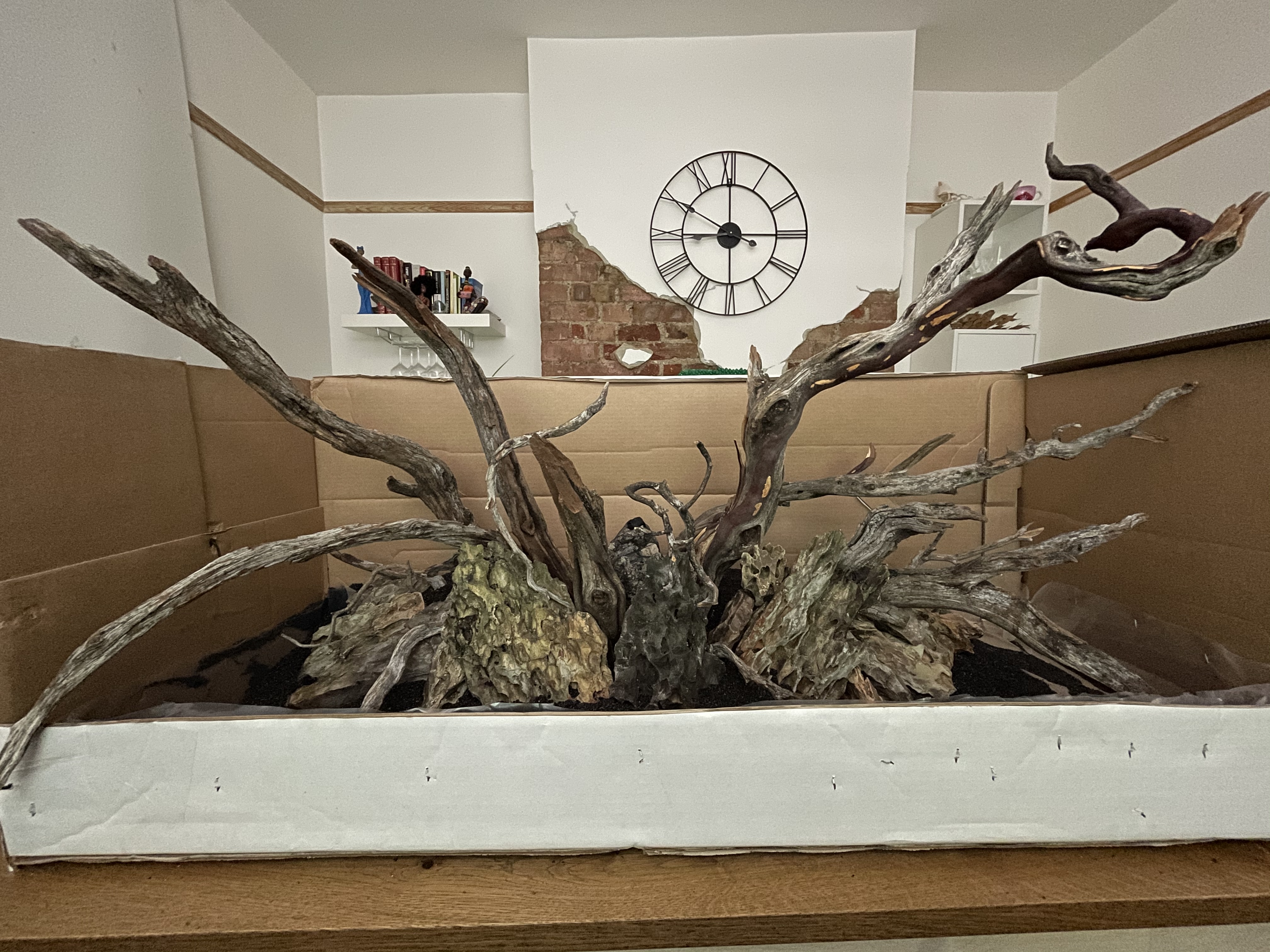 I'm thinking this design instead to break up the symmetry a bit. It works a lot better to create more defined planting sections. Some of the rocks are there for support and won't be there in the final design.
Instagram - Tidy Jungle II Pico Pond Salty Fingers The Edible Scape

I love the idea with the box, if its okey im going to use the idea myself on my next projects, 👍

Matthew Robinson said:
I love the idea with the box, if its okey im going to use the idea myself on my next projects,

Absolutely! It's a great way to practice with no commitment. I wasn't the first but I didn't want to use anything expensive.
Instagram - Tidy Jungle II Pico Pond Salty Fingers The Edible Scape 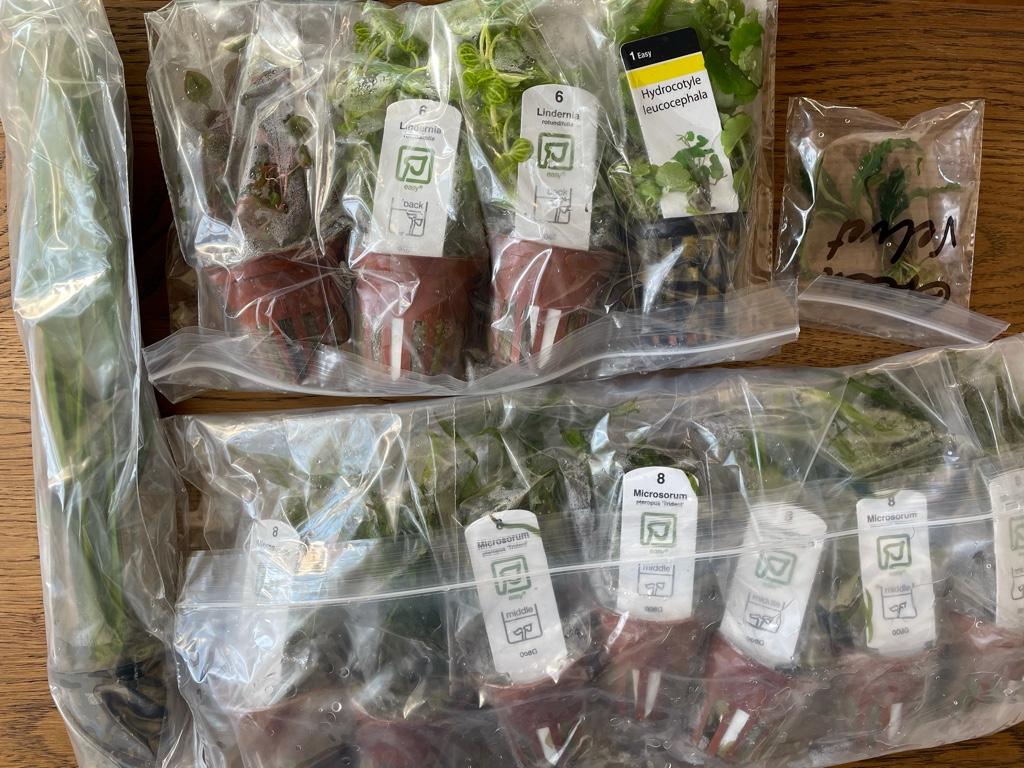 It's been 4 hours so far, I'm taking a fish and chips lunch break haha. It's one thing setting up a tank but tearing one down and then setting it back up is mammoth.

I must have pulled out no fewer than 150 cryptocorynes and I've separated them for replanting. Also can't get over how beautiful the Red Tiger Lotus is, it's been intensely pink since day 1. Hopefully it'll grow bigger in fresh, uncompacted substrate. 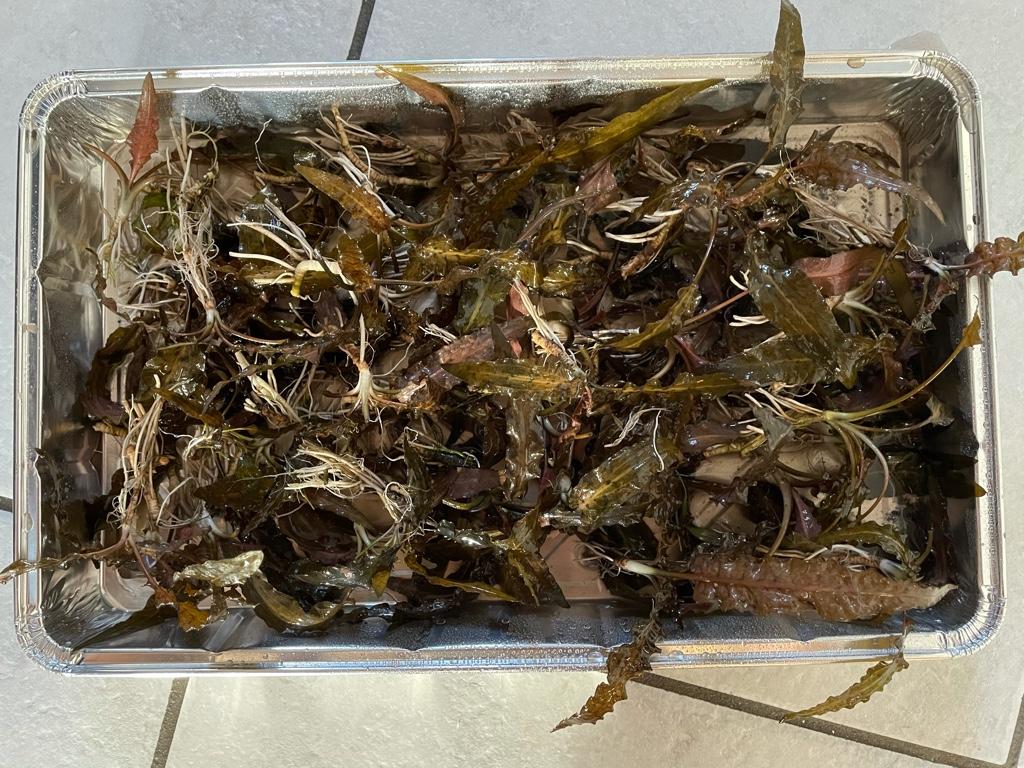 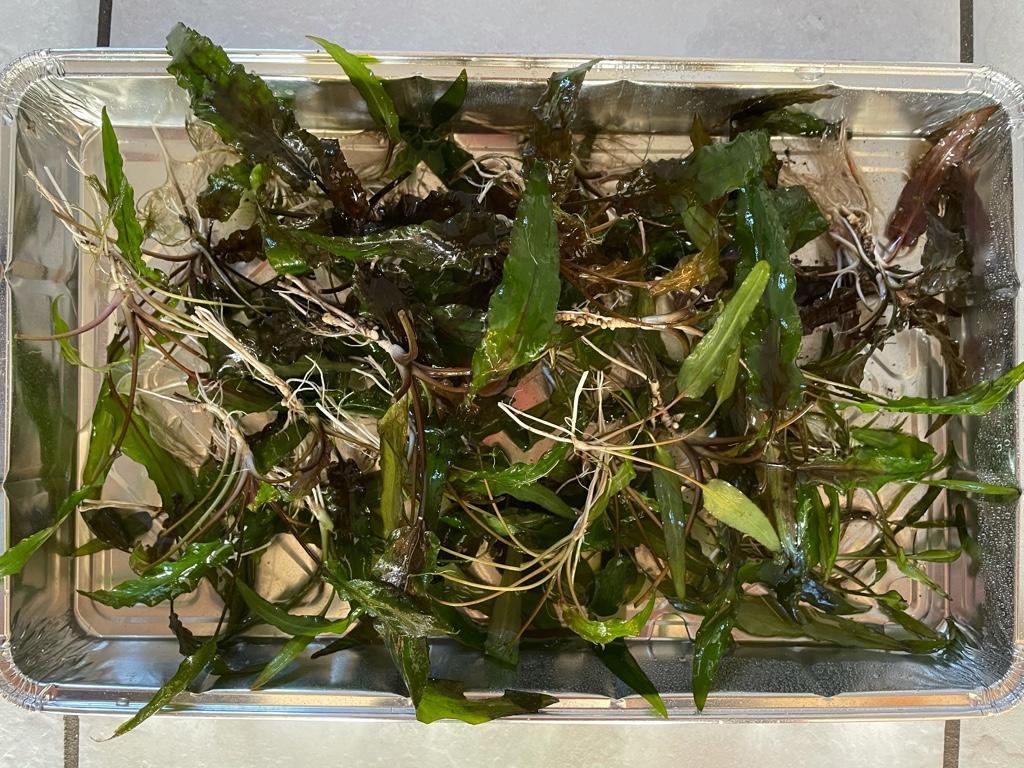 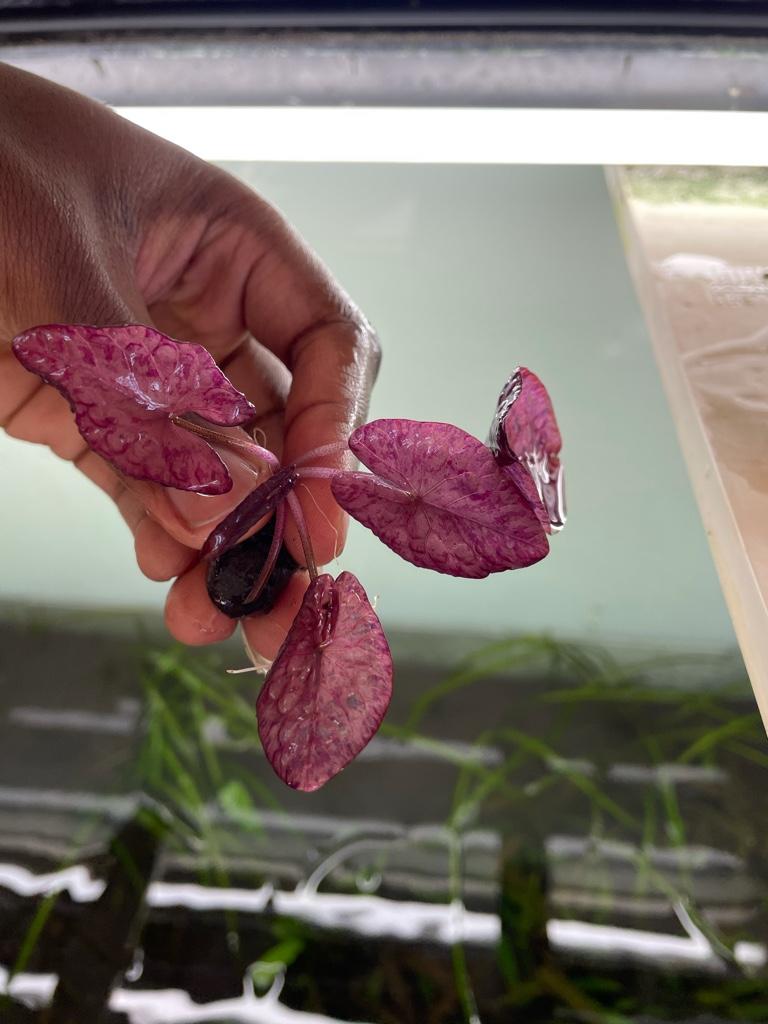 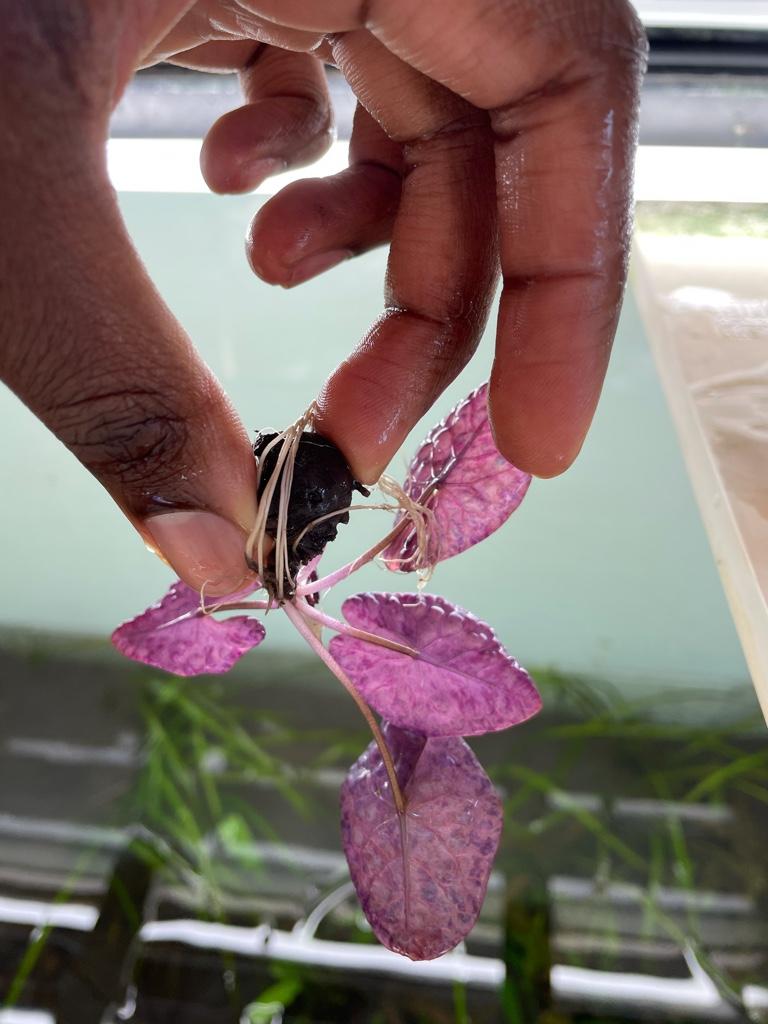 Great start. The notebook is a good idea can be refered to for when things went right and wrong and a refence point. Like keen terrestial gardners do

PARAGUAY said:
Great start. The notebook is a good idea can be refered to for when things went right and wrong and a refence point. Like keen terrestial gardners do
Click to expand...

Exactly my thoughts. I'll use it to help stabilise the tank based on what is/isn't working. Also sometimes I completely forget that I've even grown something! Before the rescape I thought I had never grown vallisneria in this tank, only to find a picture of 2 years ago with a full back wall of vallisneria. How I didn't remember that is beyond me.
Instagram - Tidy Jungle II Pico Pond Salty Fingers The Edible Scape
You must log in or register to reply here.