Welcome, and thanks for reading ☺️

I intend to keep this as a running journal for my new 310l / 150cm Draws & Doors AquaOak setup, which will (hopefully, if all goes well) eventually be home to a shoal of tetras and group of discus, plus a cleanup crew. Prior to this I'd only ever kept small tanks (20ish litres) for bettas, but I discovered GF's Youtube channel a couple of years ago and I've been researching and planning a decent sized scape ever since. Hubby agreed that when we moved from our dinky 2 bed into a bigger house then I could have a good sized tank in the living room. Before the ink had even dried on our exchange of contracts in December 2020 I was online deciding what tank to order. Apologies in advance for any photos that are out of focus on one side - my phone has been dropped one too many times and the camera is a bit knackered as a result.

1. Delivery Day
After a lot of phoning around, Vicky at Maidenhead Aquatics in Wheatley was eventually able to source one of the last of these tanks currently available in the UK. Apparently there are more on order, but they are stuck in a shipping container somewhere in Vietnam? The tank was delivered in early March, just 3 days after we'd moved into the new house because obviously we didn't already have enough to do Spent the next few weeks collecting hardscape and other bits and bobs while waiting for the filter (Oase Biomaster Thermo 850) to arrive from Germany. 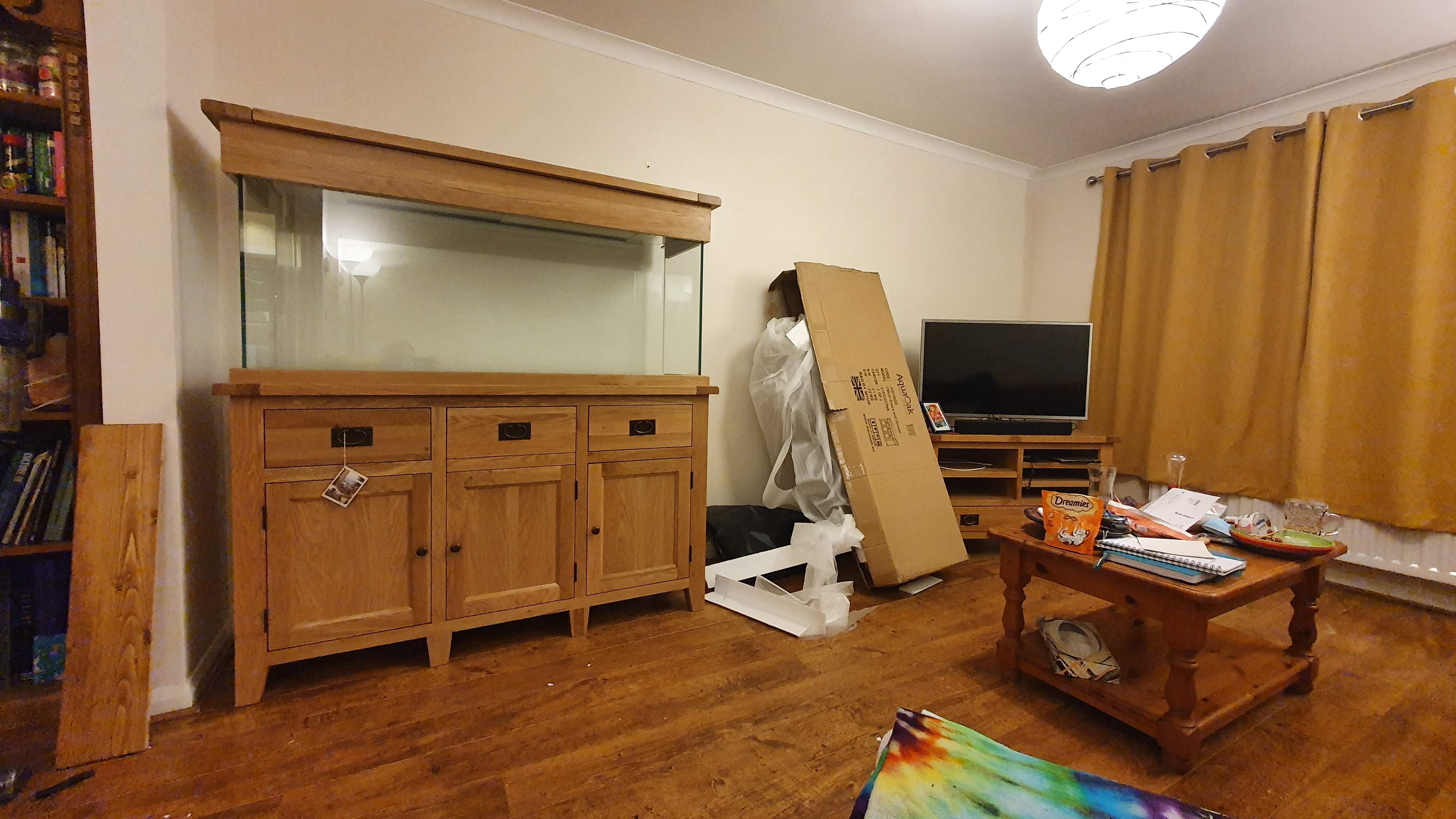 2. Setting up - Hardscape
The filter eventually arrived so this past weekend I finally got around to setting up the tank. Hardscape is Mopani wood (pre-soaked in a tub outside for 2 weeks until it sunk) plus Seiryu stone to create a dividing wall to seperate the sandy area at the front from the planted area at the back . We also pulled the tank forward and did a test fill at this point to make sure the pipework for the filter etc was leak proof. It wasn't, thanks to a faulty in-line CO2 diffuser. Drained it down again, chucked the diffuser and plumbed the pipe directly into the filter (decided to use an in-tank CO2 diffuser instead), refilled it again and gave it the OK. Drained it down once more and pushed the tank back to the wall into it's final position. 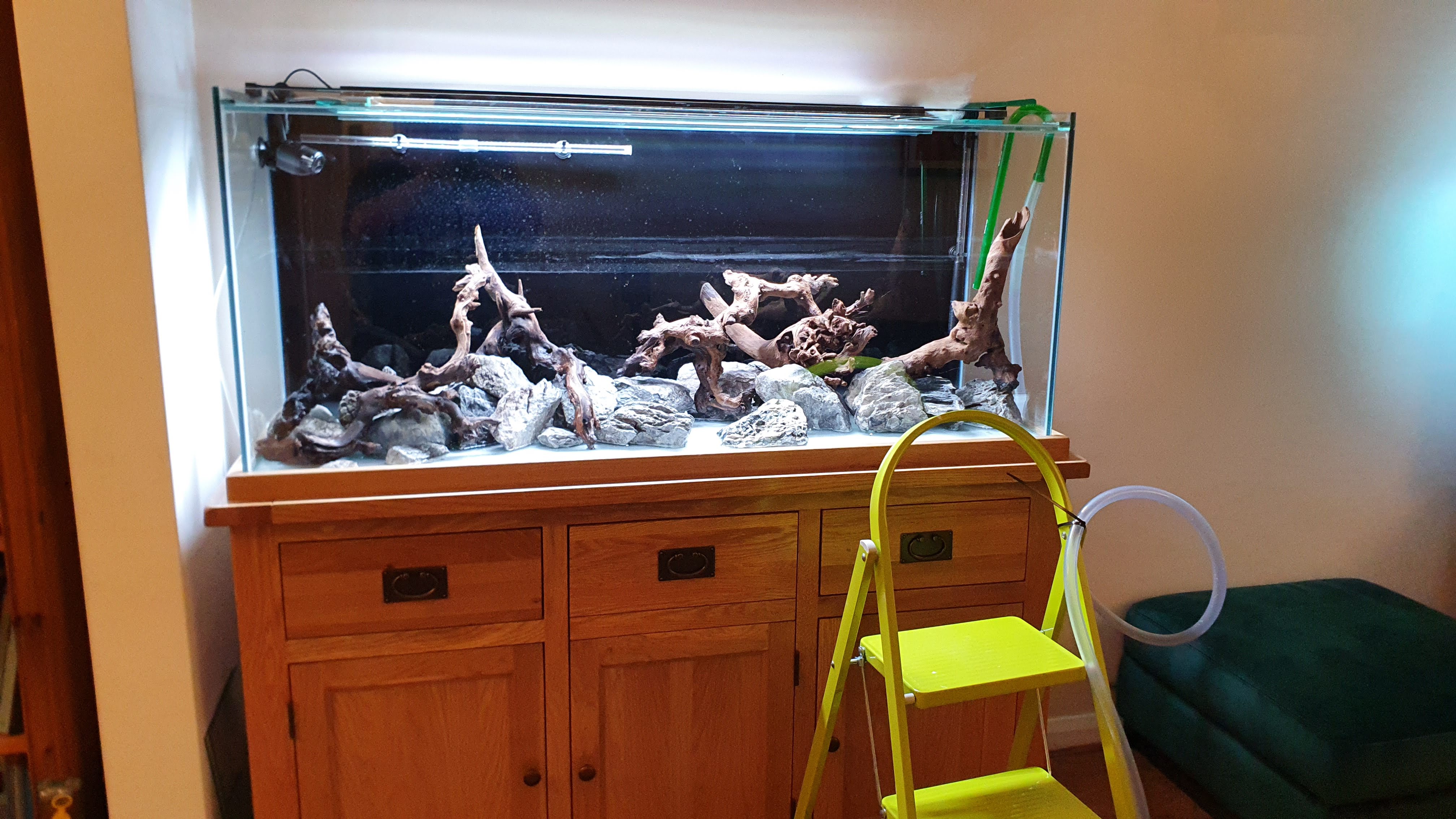 3. Planting & filling
Lots of easy plants that should hopefully be tolerant of the higher temps that discus prefer. Several varieties of anubias, moss and java ferns attached to the wood and strategic pebbles with cyanoacrylate glue. Vallis, amazon swords, cyperus and red tiger lotus bulbs planted into the soil which is Colombo Flora Base Pro. Unipac silver sand used at the front. All holes and gaps in the dividing rock wall were plugged with filter floss to stop the two substrates mixing. Filled it up with a hose from the kitchen sink & turned the filter, heater and circulation pump/powerhead on. 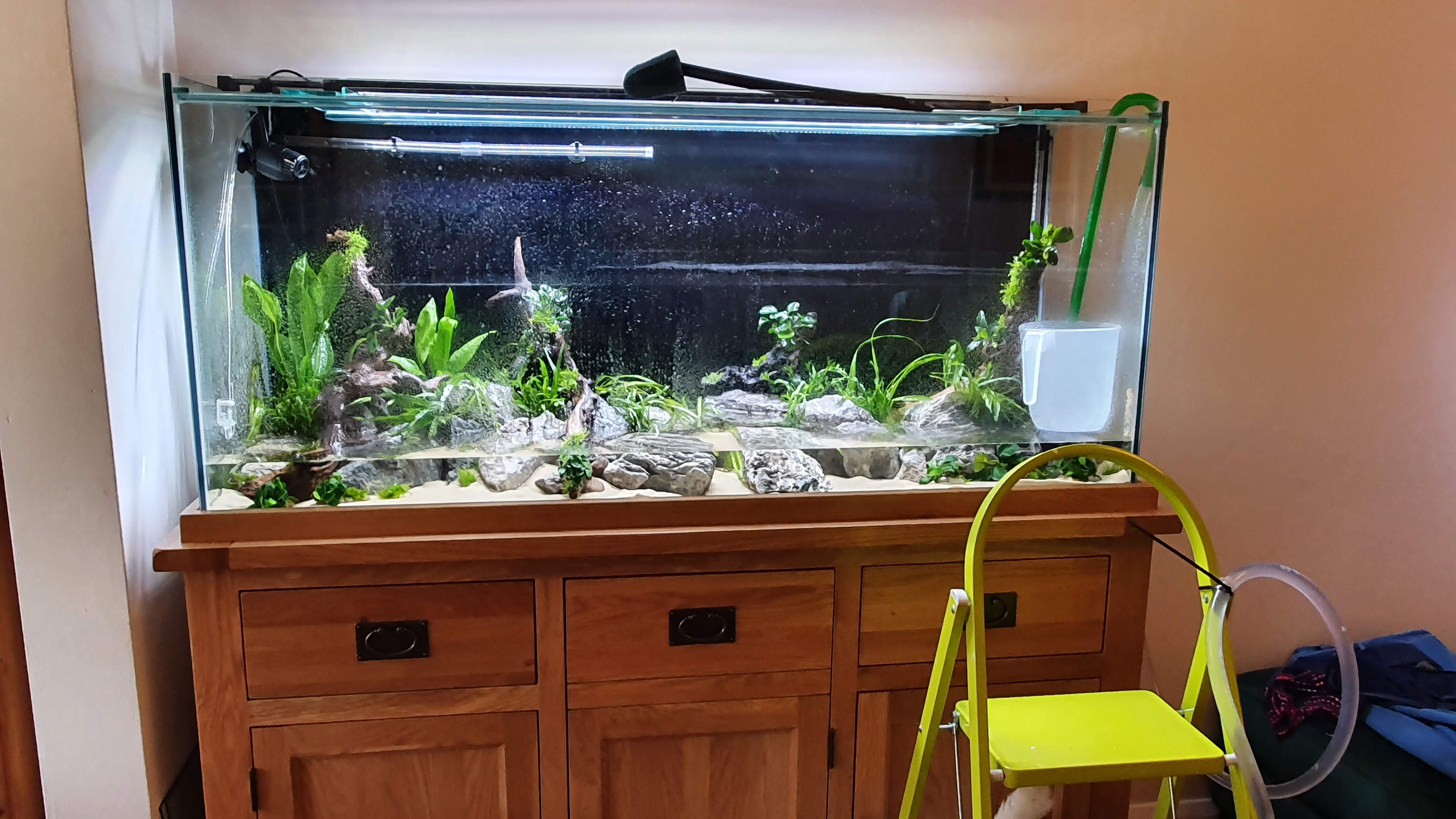 4. The next day
Heater is currently set to 24*C and I will very gradually ramp this up 1 degree at a time over several weeks to allow the plants to acclimatise to the warmer water. There is a CO2 system with a 2kg bottle and dual stage regulator to add on but I haven't got around to setting it up just yet. Lighting is a single Fluval Plant 3.0 59w, currently set to come on at 50% intensity for just 6 hours a day for now. Overnight one of the java ferns managed to come loose and had to be shoved back into it's gap with a pebble to hold it down, but otherwise it all looks OK. 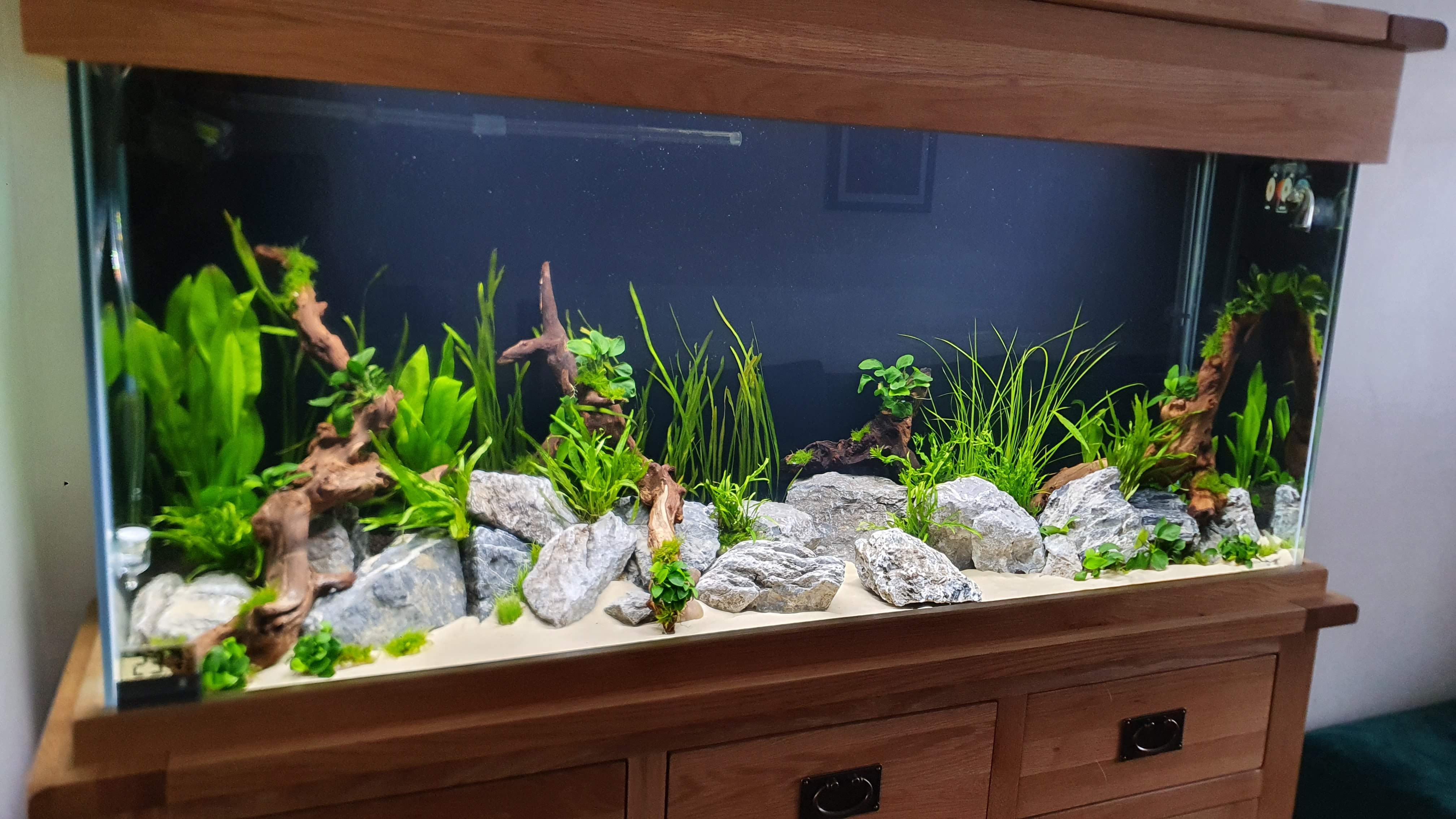 That's it so far. This next week will be taken up with water testing, water changes and adding in the CO2 system. I'm also finding the spraybar quite ugly and am thinking of getting rid and just having the outflow come straight into the tank, but we'll see.

Thanks for reading. Any comments or suggestions very much welcome!

Looking good, and sounds like you have a pretty firm handle on things already!

Beautiful tank stand! I keep planted Discus tanks myself, much to the chagrin of some of Discus keepers. A couple of unsolicited comments if you don't mind too much. You have beautiful Seiryu Stone, I am envious. However, Seiryu Stone raises PH. Nice plant selection, I am looking forward to seeing what you fill in with. As to Discus, I would not use your tank as a grow-out tank and introduce Discus, preferably in one group, who are 3.5 - 4 inches. Because Discus are messy eaters I run two filters per Discus tank you may want to add an Oase 600, you can adjust the flow with most modern filters. I also don't feed beef heart because it is so messy, FD worms, pellets instead. One of my tanks is 75gal/283L and I have 2 Fluval 3.0 lights on it to get the spread and depth that I need. Be sure that your tank is fully cycled before you add your Discus. Good luck! Looks good so far. FWIW -YMMV.

Post-Script: be sure to watch the three? George Farmer videos on his Discus tank on Youtube.
You must log in or register to reply here.