I know some of you have kids, like me, who are making their first steps into our hobby. Or maybe its a nephew or niece or ... you name it! Show us what they've made! My 6 year old got a fishtank from a friend some weeks ago for his bday, and last weekend we finally set it up. He picked all the decorations, plants, rocks and grit, and then decorated and planted it himself. I only helped with cleaning the grit and putting it in the tank, some suggestions regarding the epifytes and not planting tall plants right against the glass which he actually took to heart! And of course the filling it with water since I didn't want water all over the place.
He wants to stock it with 'snake fish' (kuhlis) and a betta. He also wants some shrimp, but I said the betta might eat them. He told me not to worry because he will just tell the betta 'No! Dont eat them!'.

I'm happy he is enjoying it this far, and now my oldest son, who didnt seem very interested in the hobby this far, has set his eyes on one of my tanks that I intended to get rid of. I dont mind him having it, but his mother isnt crazy about the idea though. She was happy I was getting rid of one tank, now its just being moved to another room But I'd like it a lot of both of them end up enjoying this hobby as much as me! Now behold, a six year old's masterpiece : 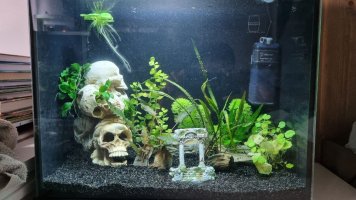 Whoops, accidentally put this under stickies, can someone please move it?

'Skull Mountain' is now inhabited by 6 kuhlis, 6 Vietnamese danios and 2 platies, a large snail, 2 cherry shrimp and many smaller snails. If all goes well might get 2 or 4 more danios, and a type of 'sticky/sucker fish' that stays small and maybe more shrimp. 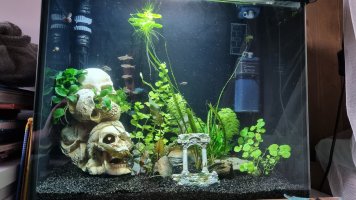 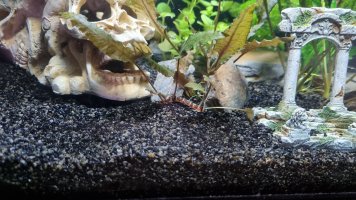 No co2, no ferts except root tabs, 1 bucket of water changed every week. This far plants seem ok, but I do see some algae along the edge of the crypts. Gonna dose those with liquid carb tomorrow.
I was hoping more people would show their kids first steps into our hobby. No amazing scapes, just them hopefully getting into our hobby

Looking good. Looks like something I would have chosen when I was younger. No kids in this house so can't share anything I'm afraid. If I had kids then I might have an excuse for more tanks. I've been told 4 is too many.

Here is the creation of my eldest (11) son, drowned castle. Once the floating wood sinks it will be like a bridge across the rocks. I think he did a good job 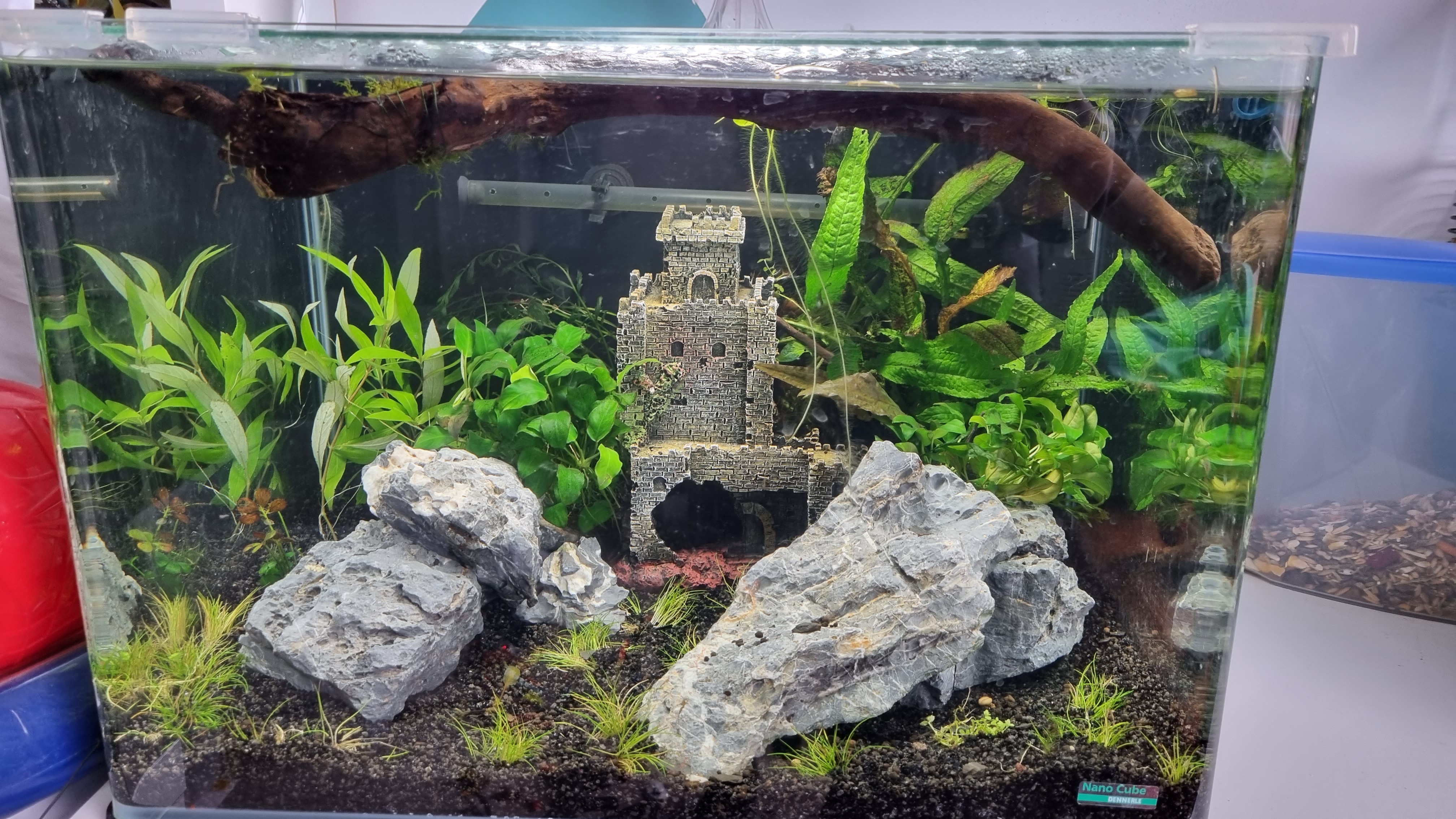 My nephew is more interested in games and discord than aquariums unfortunately.

Sent from my BV5500Plus using Tapatalk
keep on keeping fish

Angus said:
My nephew is more interested in games and discord than aquariums unfortunately.

Sent from my BV5500Plus using Tapatalk
Click to expand...

Our kids have strict gaming quota's each week, otherwise that would be all they did as well

Skull Mountain, the tank of my youngest son, is still doing good, gave my son some more of my leftover plants and started dosing 1 pump of tropica each week since the snail eats so much of the plants. One of his platies died a few months back, it was burried with many tears in the backyard. Its adorable how much he cares the platy left behind 6 little ones and a mourning husband showing signs of his age. Currently one of the minnows has a minor fungul problem so treating the tank atm. The tank now also holds a small albino ancistrus. Should it grow too big it can move to my larger tank but for the coming time it fits here just fine. His shrimp are berried more often then not but I think the shrimplets all become food quite fast. I will buy a bench of Java moss sometime soon so they stand a chance. 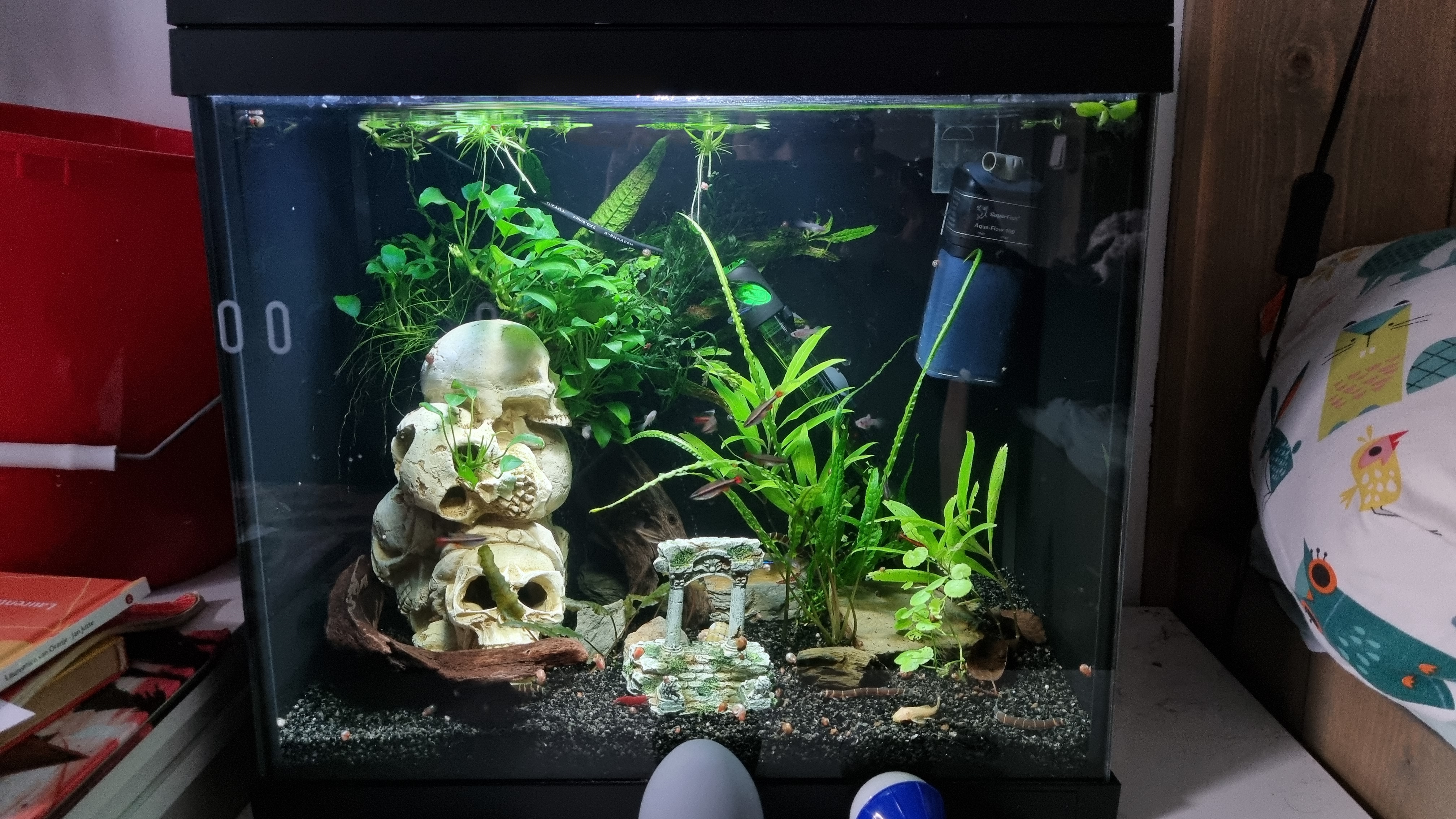 Wolf6 said:
Our kids have strict gaming quota's each week, otherwise that would be all they did as well
Click to expand...

As it should be! My nephew is a good lad though, schoolwork comes first, but he is just a gamer at heart, i can't be against it as i have been known to be a habitual gamer myself, however trying to take a break more recently and live in reality.

i would set him up a tank but i would end up doing all the maintenance just like the PC i set up for him...

Mine aren't all that interested in my tanks, just dads weird hobby

Why would you want to do that??, it's no fun 🎮🎮, I used to be a big gamer but kids are a good way of stopping that, i don't think i have played a console game in a few years now

Tank of the oldest is coming along nicely. We added 6 blue rasbora, one small albino ancistrus (if he gets too big we will move him) and 5 blue shrimp. Plants growing well, stock happy, he doesnt spend as much time as id like with it but doesnt neglect it either, so i guess thats good? 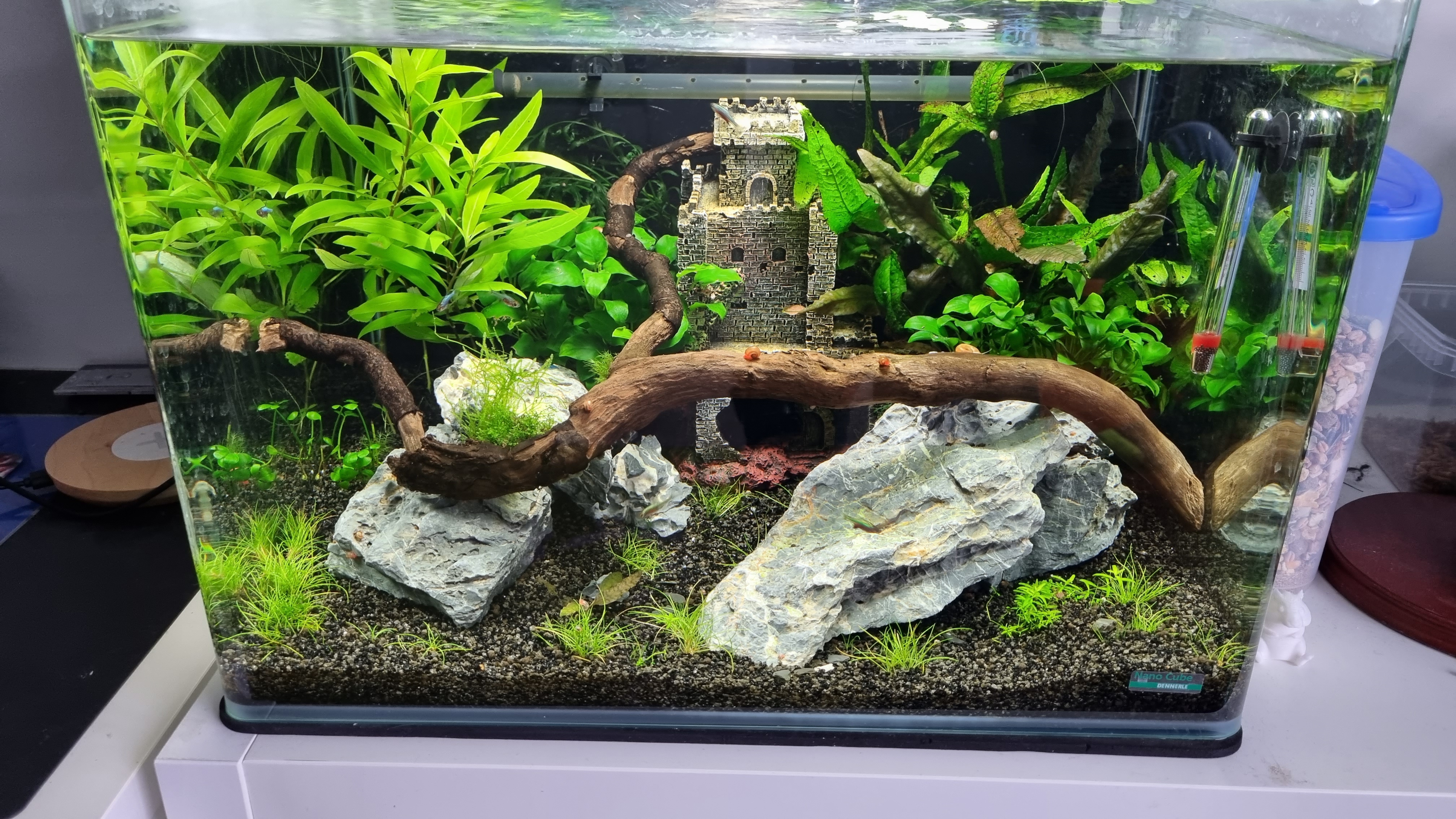