I discovered this (new to me) strange siphon effect quite by chance. There is nothing new under the sun but I have not seen mention of this before.
See Video


What I have found?​

You can create a “self governing siphon” by simply placing a small hole (less than 1mm for airline) between where the tube meets the water and the apex.
With the siphon running a small amount of air is sucked in through the hole resulting in a mixture of air and water running through the tube. The faster the siphon runs the more air is sucked in. The more air is sucked in the slower the siphon runs. This is negative feedback..!
For any given rate of inflow (within limits) the siphon will eventually reach a state of equilibrium where the water level remains stable. In other words the siphon will remove water at exactly the same rate as the inflow.
To date I have only tried this with airline and 6mm drip irrigation tubing, although I see no reason why it shouldn't scale up to garden hose for example.


How can it be controlled?​

I need to do more experiments to confirm this but it seems moving the hole up or down in relation to the surface causes the water level to increase or decrease by roughly the same amount. Increasing the inflow will cause the level to rise until a new equilibrium is reached and vice versa.
There is a minimum rate of flow below which the siphon will stop and not restart even when the water rises again.
There is a maximum rate of flow above which the siphon cannot keep up with the inflow. The absolute fastest rate of flow is achieved when the level rises above the hole thus shutting of the air intake altogether.
So long as the inflow is constrained between these limits I have found the siphon to work very reliably. Never the less I have a small motor attached to the end of the siphons in my auto water change system so in the event the siphon stops for any reason the motor kicks in for 10 seconds after which the siphon is primed. A little more to it than that but you have the essence.


How does it work​

I would be very interested to hear from anyone who knows how this works. My thinking at the moment is that as the flow increases so the pressure in the tube decreases and once below atmospheric pressure air is sucked in and vice versa.

The way you describe it, I think it works a tad in a similar way as an air venturi works... Tho the venturi relies on the pressure difference in front and behind the venturi. In the case of a tiny hole in a tube without a venturi, there still are pressure differences due to the medium's density and flow speed. You could compare the intake of the air via the hole in the tube as a capillary suction.

Anyway, when the siphon starts, the water flow in the tube speeds up while falling down the tube. This creates a pressure difference and the tiny hole starts to suck in air. This makes it actually equally functioning as the venturi gas/air diffuser but less sufficiently as a diffuser. It's not a diffuser but a simple air bubble sucker.

The issue with regulating siphons equilibrium is in the length of the tube. How longer the tube the more difficult it will become to reach the desired equilibrium. Since input and or more likely output variables a rather too dynamic, dirt build-up in the tube can't be calculated nor predicted and in time will change the siphon's behavior. It might speed up or slow down erratically and or stop.

Reliable siphons need to be short as possible, the way siphon overflows generally is designed. And these work with the principle of communicating vessels.

In both cases, the output tube diameter determines the flow speed input. 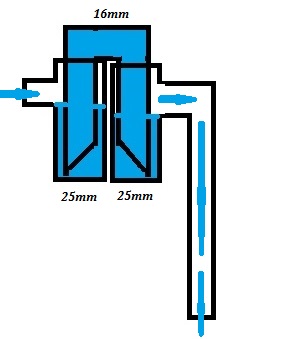 This is the one I made myself a few years back and still use today.

I was both surprised and disappointed at the supposed general lack of interest in something that I found very interesting and exciting. It seemed to me that I had found something both new and novel which exhibited characteristics worth further investigation. Were this simply a siphon with a hole in it that reduced the flow somewhat then I could understand the lack of interest but it is obviously much more than that or so it seems to me.

Many thanks to zozo for providing the one response I received to date.

Here's a bit of context...
I am in the process of designing and implementing an auto water change system that runs continuously. I set up some electronics to control the inflow and outflow. I ran in to a problem with the outflow pump which when switched off continued to allow water to flow out of the tank due to the siphon effect. Cutting a long story short I eventually came up with the idea to put a small hole in the tube just above the waterline. My idea was that although some water would squirt out of the tube when the pump was running this would be small potatoes and so could be ignored. On the other hand when the pump stopped air would be sucked in and break the siphon. In practice what I found was that although air bubbles entered the tube the siphon somehow managed to carry on albeit slower. So I made the hole bigger and this time the siphon was stopped dead in its tracks but the downside was that a much larger proportion of water was squirting out the hole. After a bit of experimentation I found a happy medium and left the system running. After a few days I realised that the pump was never turning on, there were bubbles in the tube and the siphon was running continuously. In spite of this the water level was stable. At the time of writing it has been running for over six weeks and the water level is being maintained to within a millimetre or two..!

Note:- the siphon is running along the floor through approximately 8 metres of airline with a 0.5 metre rise at end before draining down into a bath.

Some advantages of this siphon...

I'm not sure I quite understood the purpose after your first post, so perhaps it needed a bit more explanation - I think I have it now. So basically the rate of outflow is corrected to the rate of inflow, so you have a system that compensates for inflow rate changes but cannot drain the tank (caveat - if the hole is sized exactly correctly, and remains clean) .

I seem to remember a syphon system with a hole described on one of the US forums many years ago (maybe 15 years so I can't remember which forum, sorry - maybe Tom Barr's?), used to prevent a failed sump pump from allowing a syphon to drain the tank, but I don't remember if it was described as you have, drawing in air as it goes and maintaining tank level.

Sounds very useful if that is what you need! I'm not sure how many of us could use such a system though - continuous change isn't something most people choose to do. What advantages does it have?

orxe87 said:
Sounds very useful if that is what you need! I'm not sure how many of us could use such a system though - continuous change isn't something most people choose to do. What advantages does it have?
Click to expand...

Two advantages that instantly come to mind are... It smooths out the sawtooth effect you get with regular water changes and removes the need for manual water changes.
I think the reason it's not so popular is the big downside if your tanks are in your home as apposed to a fish room. Namely having to run pipes to and fro between water supply and drains. I'm a widower who lives alone and doesn't encourage visitors so I can get away with it lol.

I don't yet know how practical this siphon would be when scaled up but in principle it could replace the sort of overflow boxes that are in common use.
O

Fair 'nuff, the sawtooth thing make sense. I quite enjoy water changes and use it for cleaning and pruning and what have you.

Yeah, I think I would be in trouble if I had water draining continuously into the bath

orxe87 said:
Yeah, I think I would be in trouble if I had water draining continuously into the bath
Click to expand...

zozo said:
The way you describe it, I think it works a tad in a similar way as an air venturi works...
Click to expand...

I'm still messing around with this siphon but I can confirm that you were absolutely right about it being the venturi effect that was causing the air to be sucked in. Rather than put the hole directly in the airline I had (without giving it much thought) cut the airline where I wanted the hole and inserted a short piece of rigid plastic tube containing the hole. The plastic tube internal diameter was smaller than that of the airline and so I had unwittingly created a venturi effect. Since realising this and because I was having trouble getting it to work at the very slow flow rates needed for my application I reduced the inner diameter of the plastic tube further and this did make a difference. So thanks again for your input.
You must log in or register to reply here.
Share:
Facebook Twitter Reddit Pinterest Tumblr WhatsApp Email Share Link