Second timer that has died in short time, this time on one of the lights. Ordered a new timer, spending a bit more this time, and hopefully that will prove more reliable. Havent torn down the tank (yet), still not entirely certain. Not much new, BBA is almost gone again thankfully.

Third timer died within 2 days of use so I deceided to just replace the light it was controlling with the second onf nano+ I had for my vase project which just hasnt happened yet. With the app I no longer need timers this way. Tank is doing fine other then this it seems. 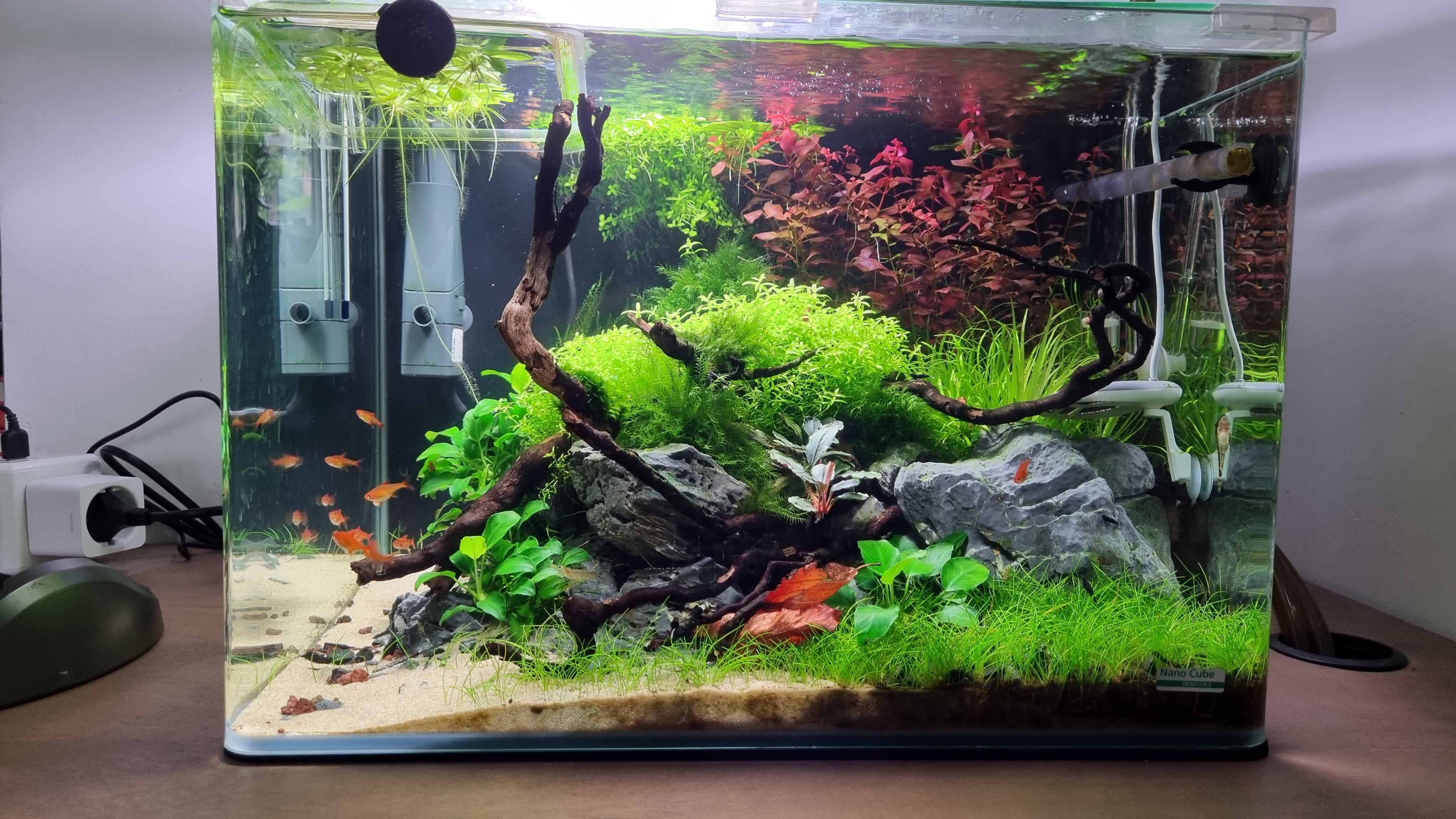 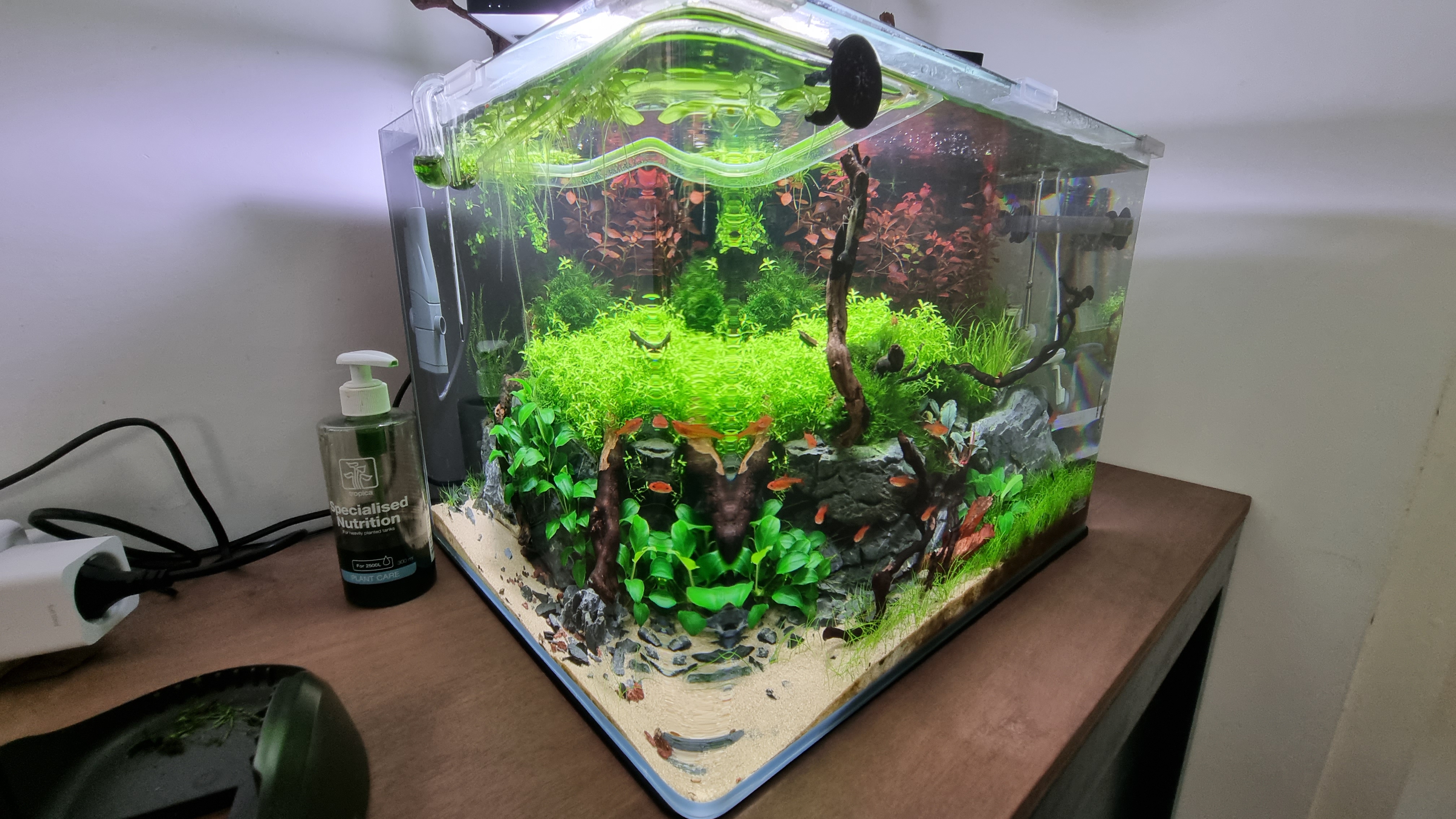 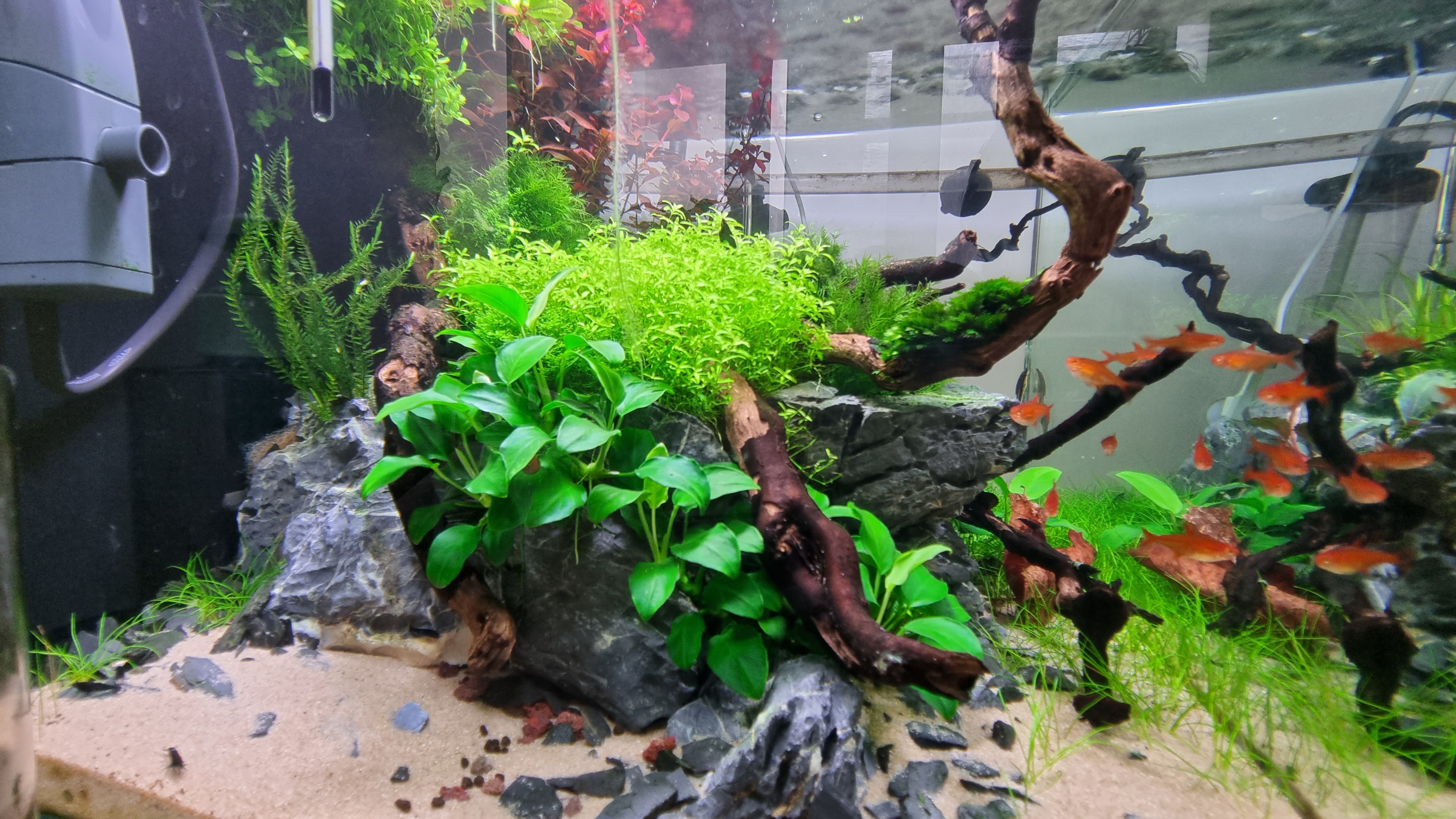 Time for a trim on monday! 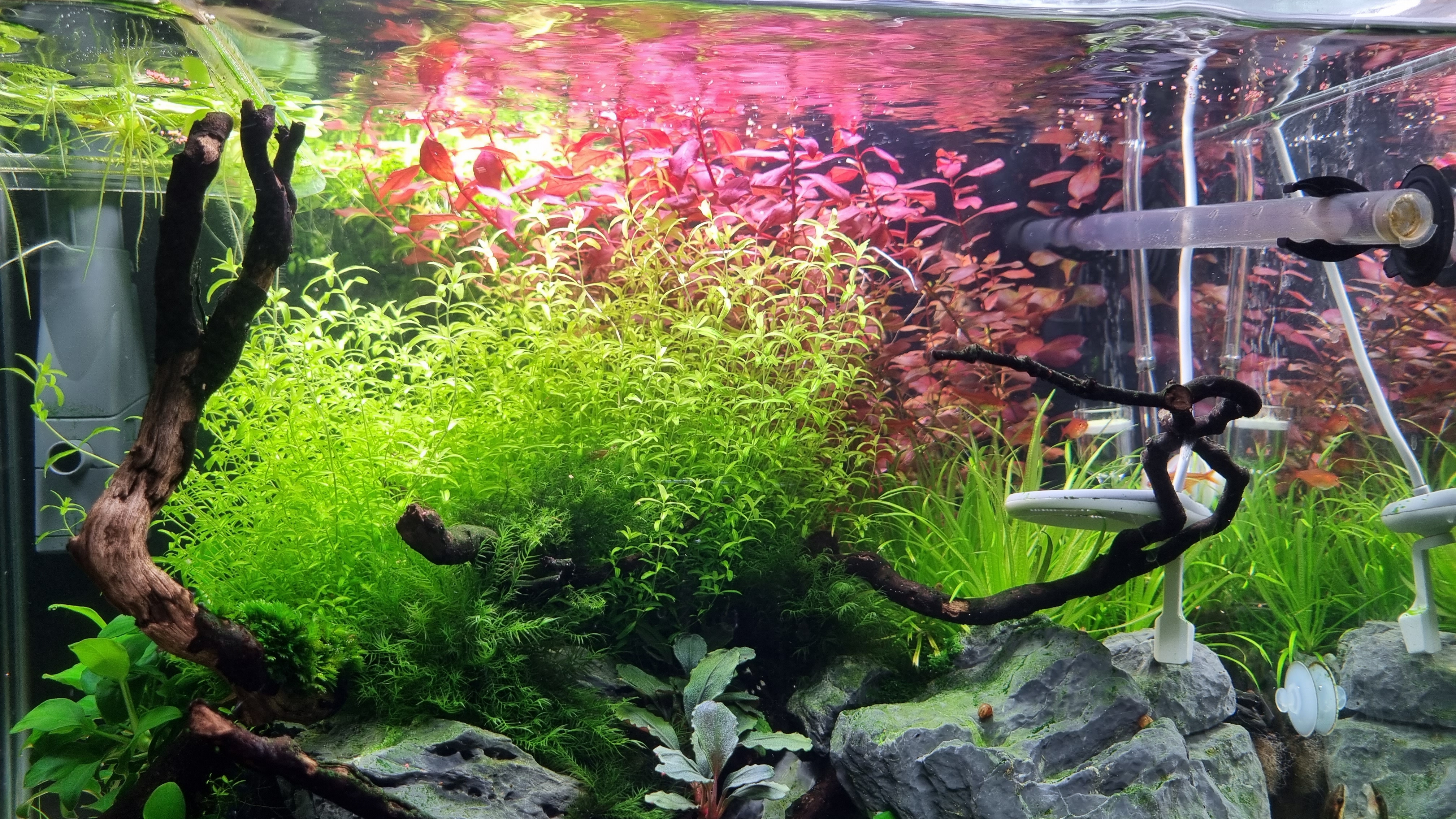 After cutting back some plants. The twinstar just came on. Still love the effect it gives. 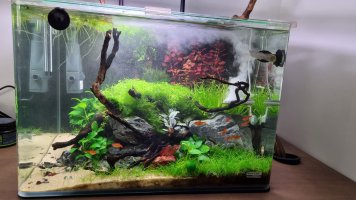 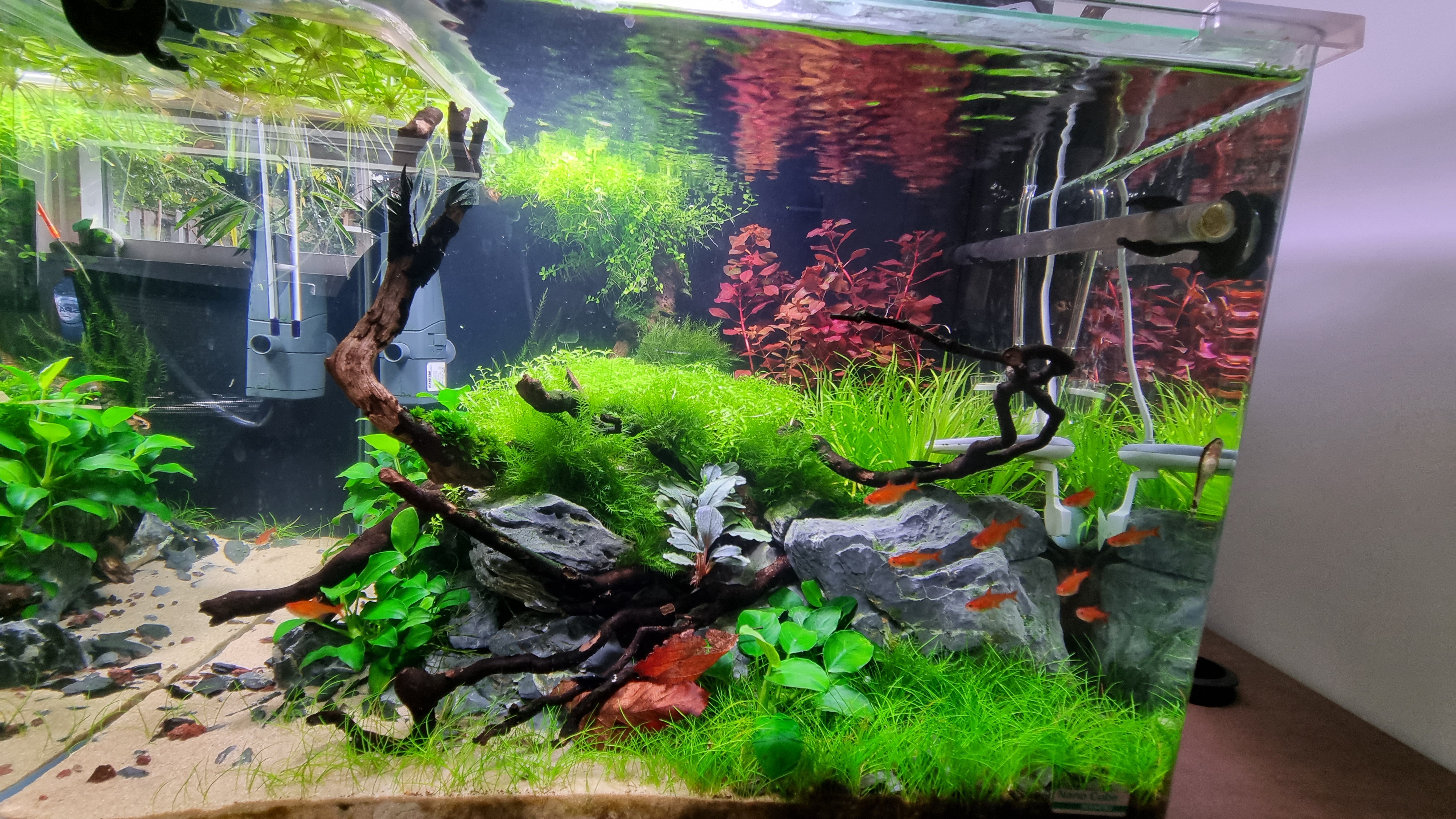 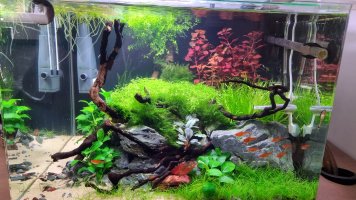 Back from vacation...exploded plants! Trimming tonight 😀 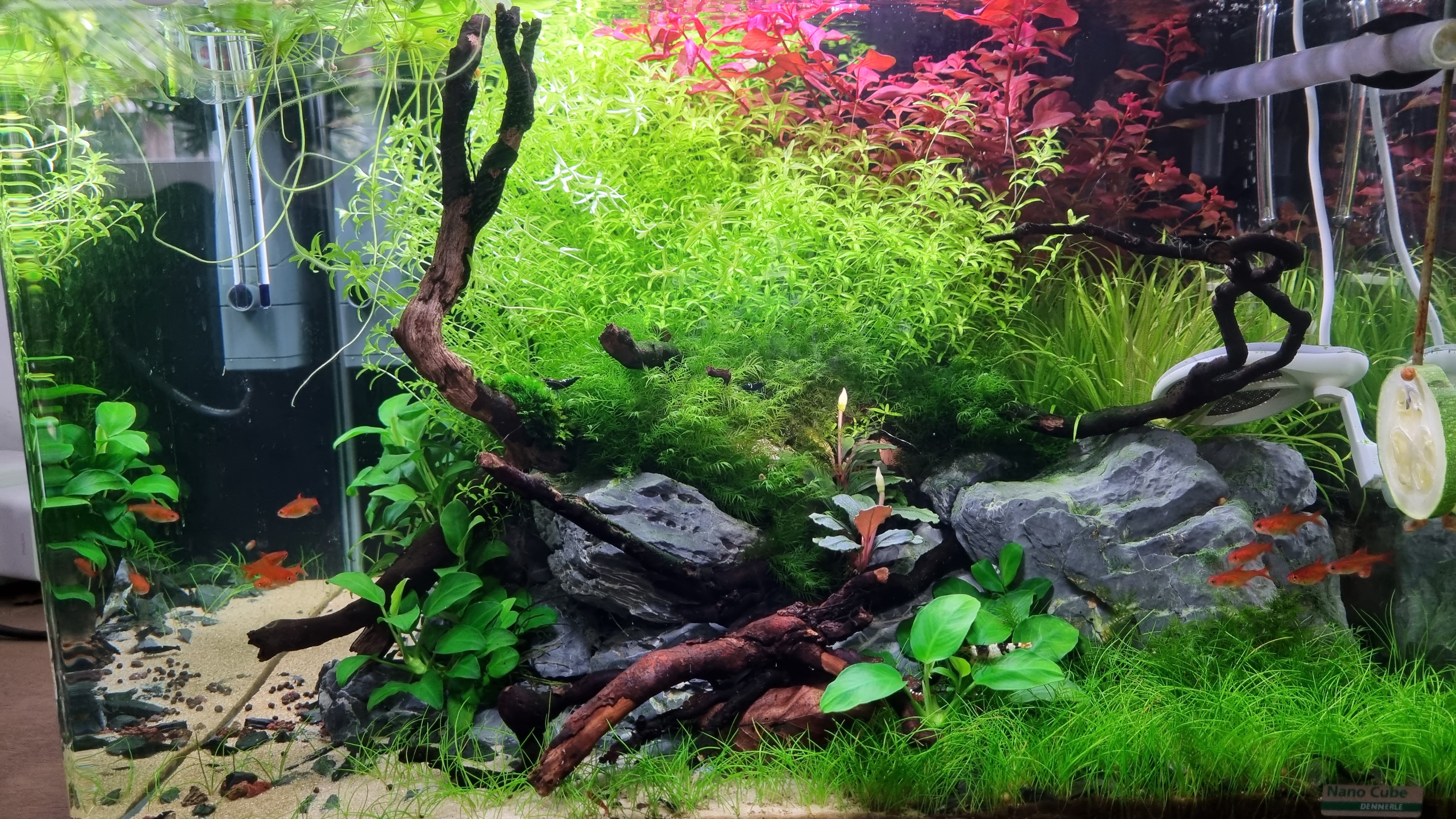 And the result... did a lazy trim of the ludwigia (as in, just cut off the tips, dont replant those/remove the old stems). Also removed some stray fissidens from my lawn. 3 flowers in the buce this time, moving up. The lack of regular ferts during the vacation has resulted in some minor gsa and suspect-bba spots that I've dosed with easycarbo. Fissidens is really exploding atm. Also loving the colours of the second and third generation of shrimp, nice velvet black. Sorry for the reflections etc, I'm a lazy fishkeeper and a lazy photographer. 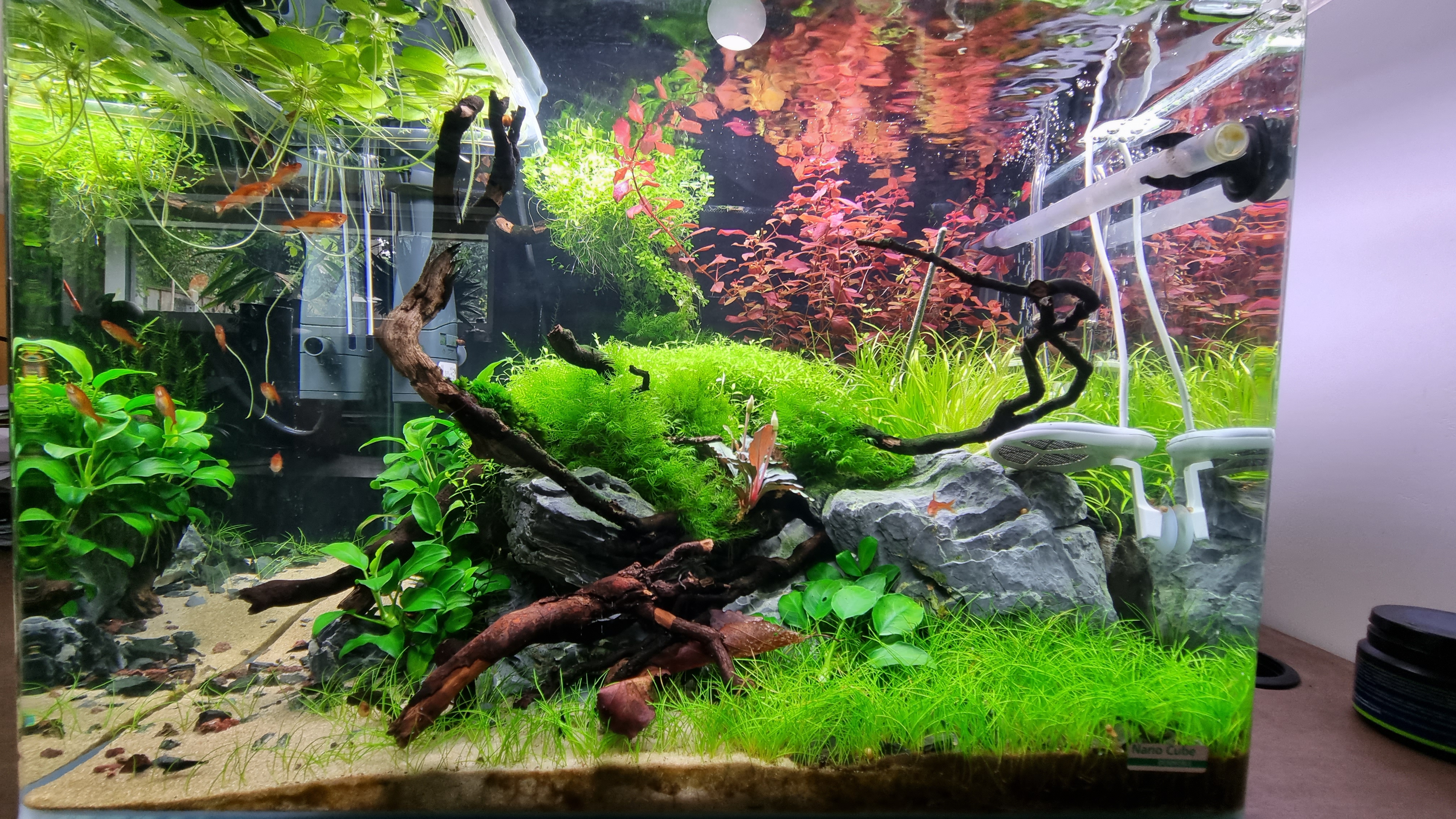 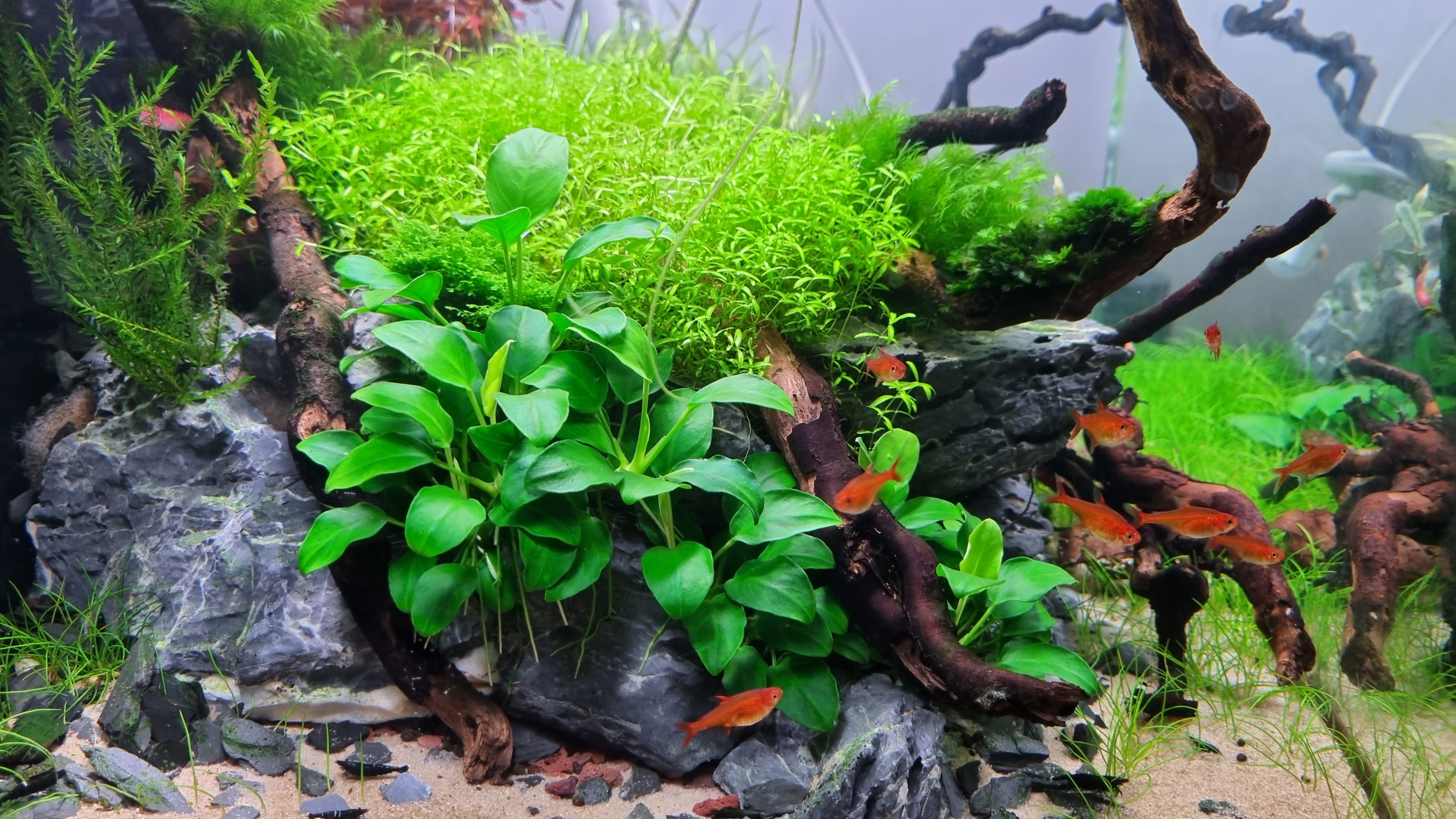 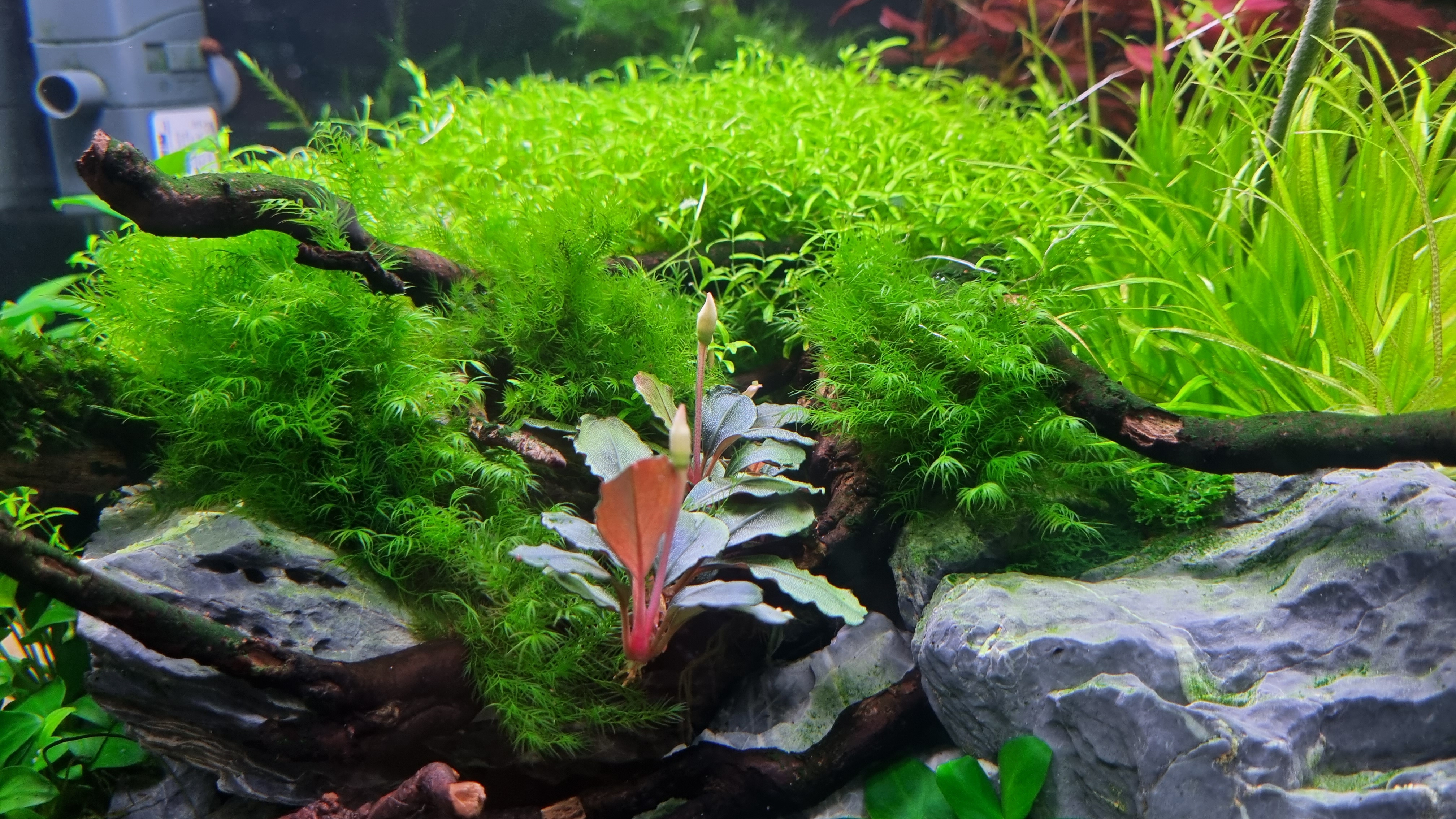 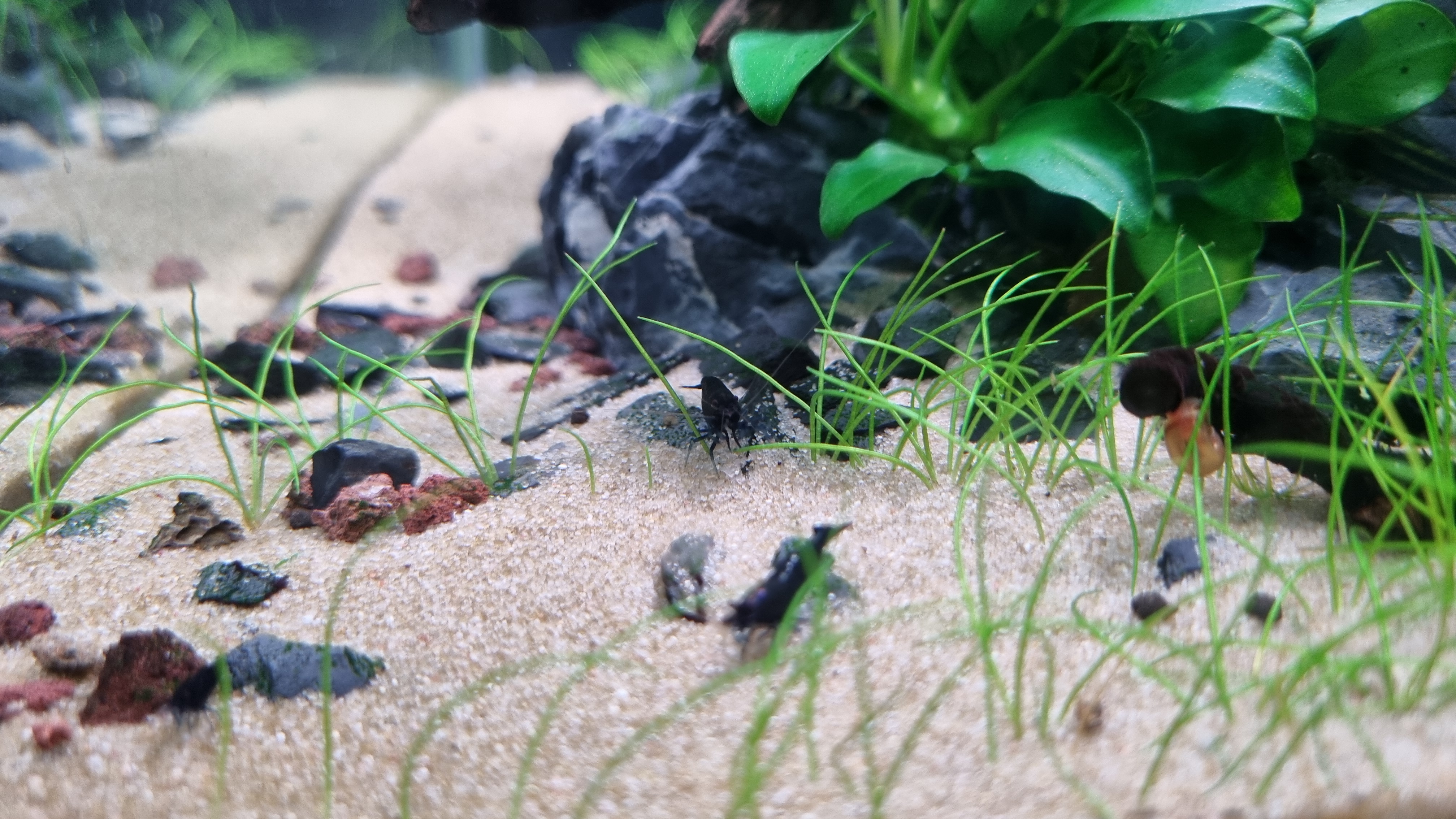 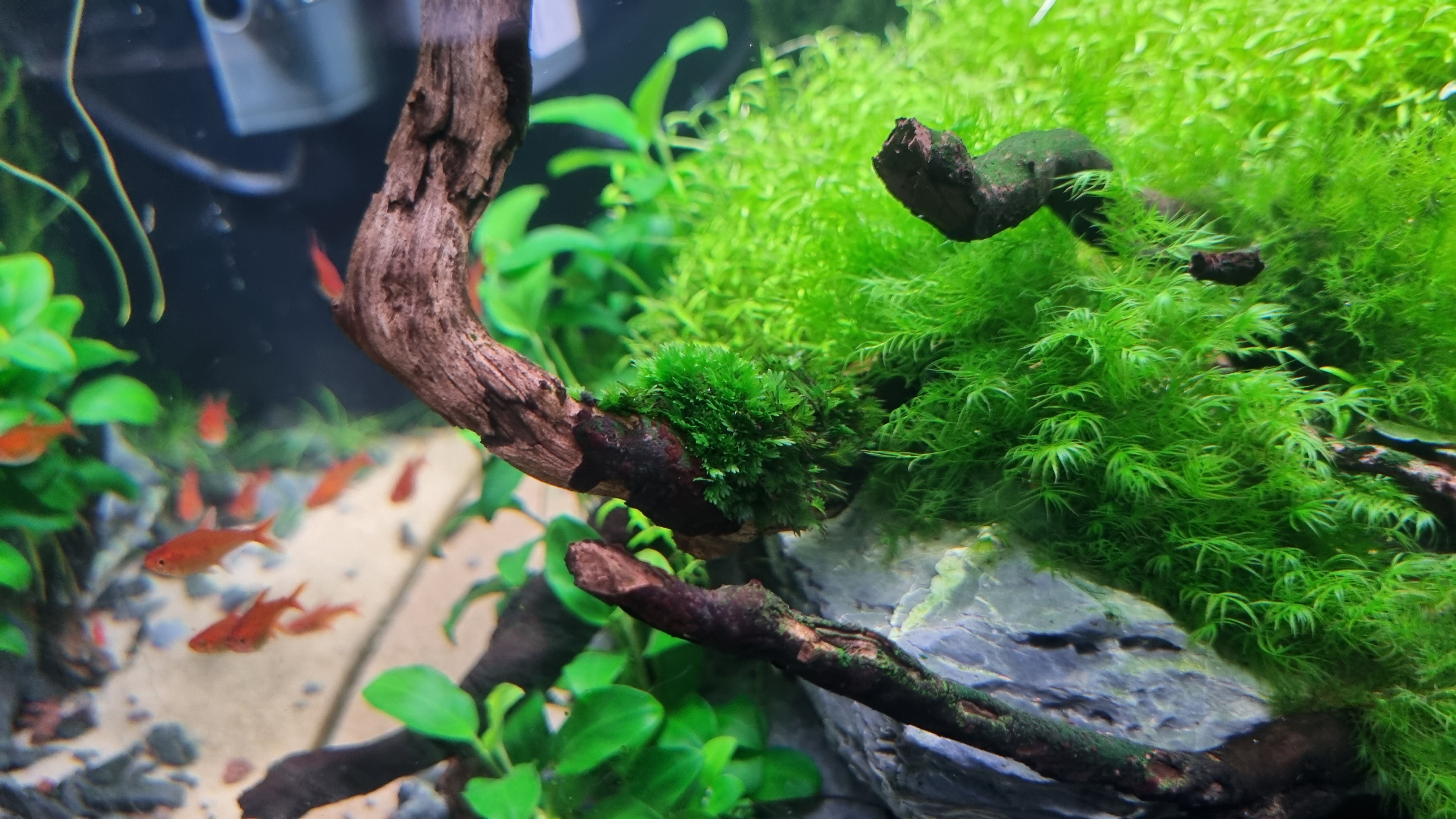 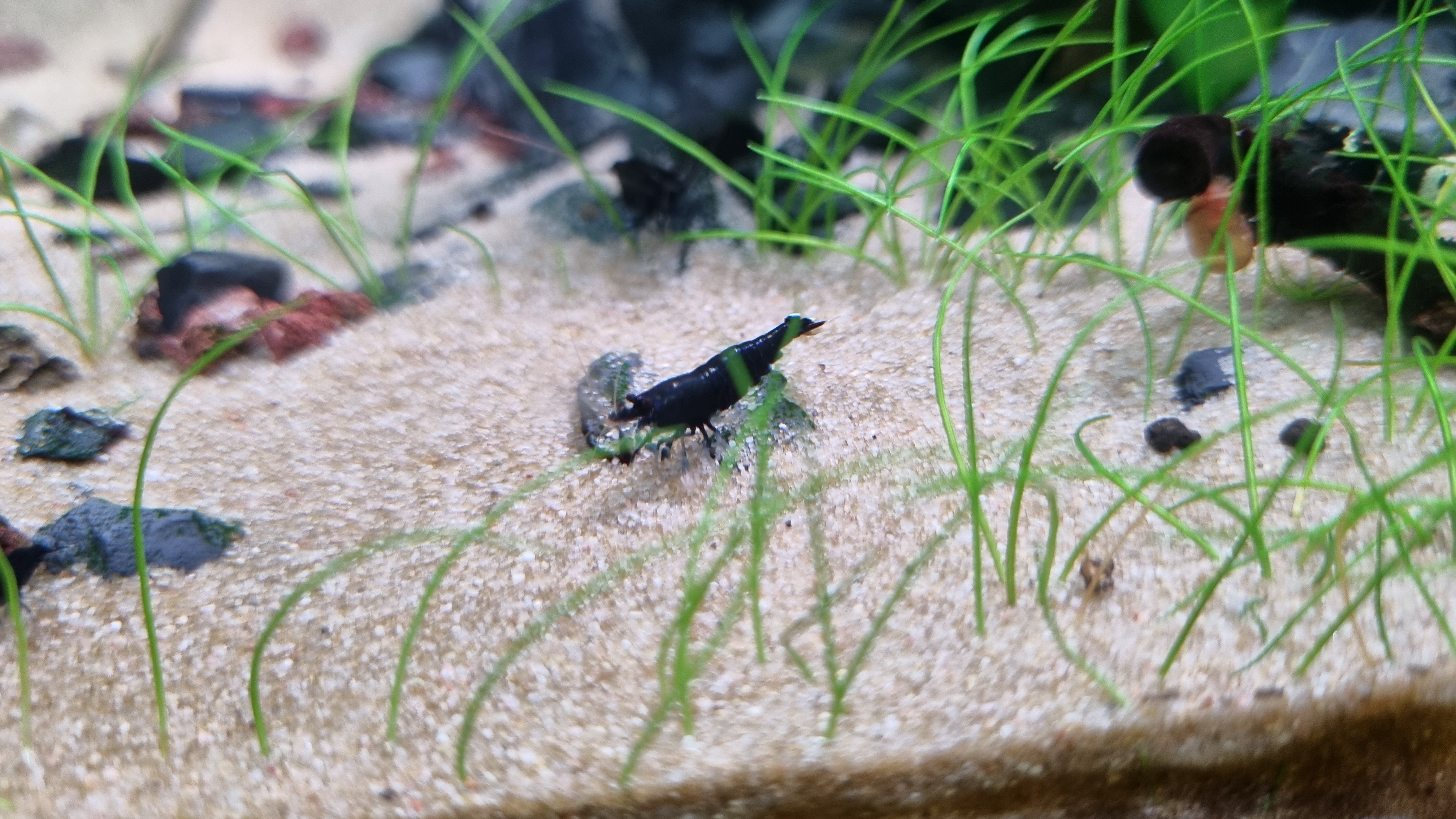 Some of my 'white stripes' as ive started calling them. G2 and G3 in this tank, their parents had much more white. 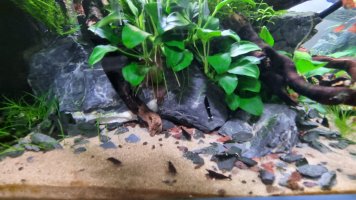 I've noticed some more GSA over the last week, possibly still from the week vacation with no/irregular ferts. Next holiday I'll turn off CO2 and lights for the week, as I think the shortage of ferts but continued same level of CO2 has messed up the balance/weakened the plants defense. I've cleaned the filter for more flow, and since my return last week ferts have been regular again, so I hope to see no more signs of new GSA growth, or preferably lessening again. 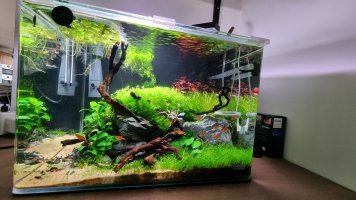 An auto-doser would solve your holiday problem @Wolf6

Wookii said:
An auto-doser would solve your holiday problem @Wolf6
Click to expand...

I picked one up for the big tank, might just do that for this one as well. This hobby is so expensive though

Always good to see they (pygmys) still live. I counted 7 out of 10, but odds are the remaining 3 are still hidden in the green somewhere. They seem to like the shrimpsticks. Picture taken from afar because I was afraid they'd instantly vanish back into the green again. Which they did shortly after the pic. 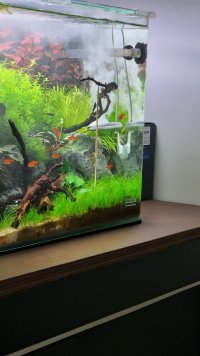 What is stability? I noticed my diffusor wasnt performing anymore, bubbles became too big so less and less CO2 ended up in the water and some plants started to show it. So I replaced it, meaning I had to re-dial in my CO2. I now use even less CO2 to achieve more saturation, but it also means there was another period of fluctuating CO2 (and not enough CO2 before the switch). And now last night, I had to do a major trim of the biggest plant mass again, so again, fluctuating CO2 (less CO2 used). I am keeping a close eye on algae development over the past few days and the coming days, until I feel the stability has returned. I've spotted some green dust algae, but that was already present (doesnt bother me and seems natural), and the GSA that were receding have gained new intensity. I hope they wont spread too much. But it makes me contemplate on the nature of stability and the importance of it, as such a seemingly minor thing as replacing a diffusor can have such impact, especially on a small water mass like this.
I briefly considered inline diffusor, but I find the glass difussor a better match somehow for this tank. It almost feels nostalgic. 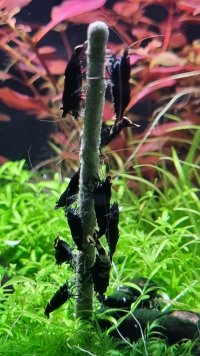 I think I'm going to dismantle this tank somewhere in the coming months, and replace it with either a 60x40x40 tank or a 75x45x24 shallow tank. Gives me a little more options fishwise, and I can give this tank to my oldest who keeps eyeing the 70x50x45 that I am getting rid of but feel is too big for him to start off with at age 11. I still enjoy it, but its a bit too cramped for me somehow. But first I need to get the big tank up and running, so this one is safe probably till the end of the year or so. 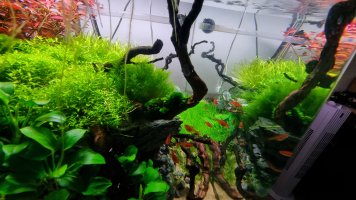 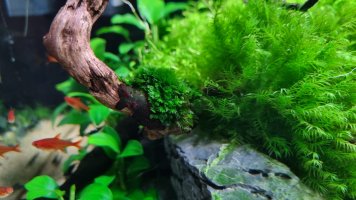 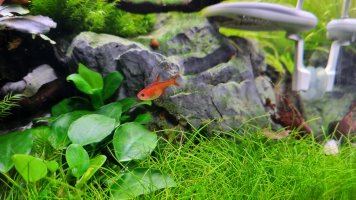 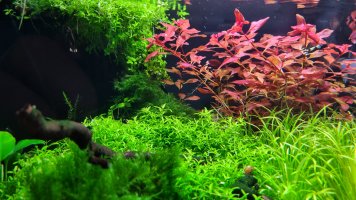 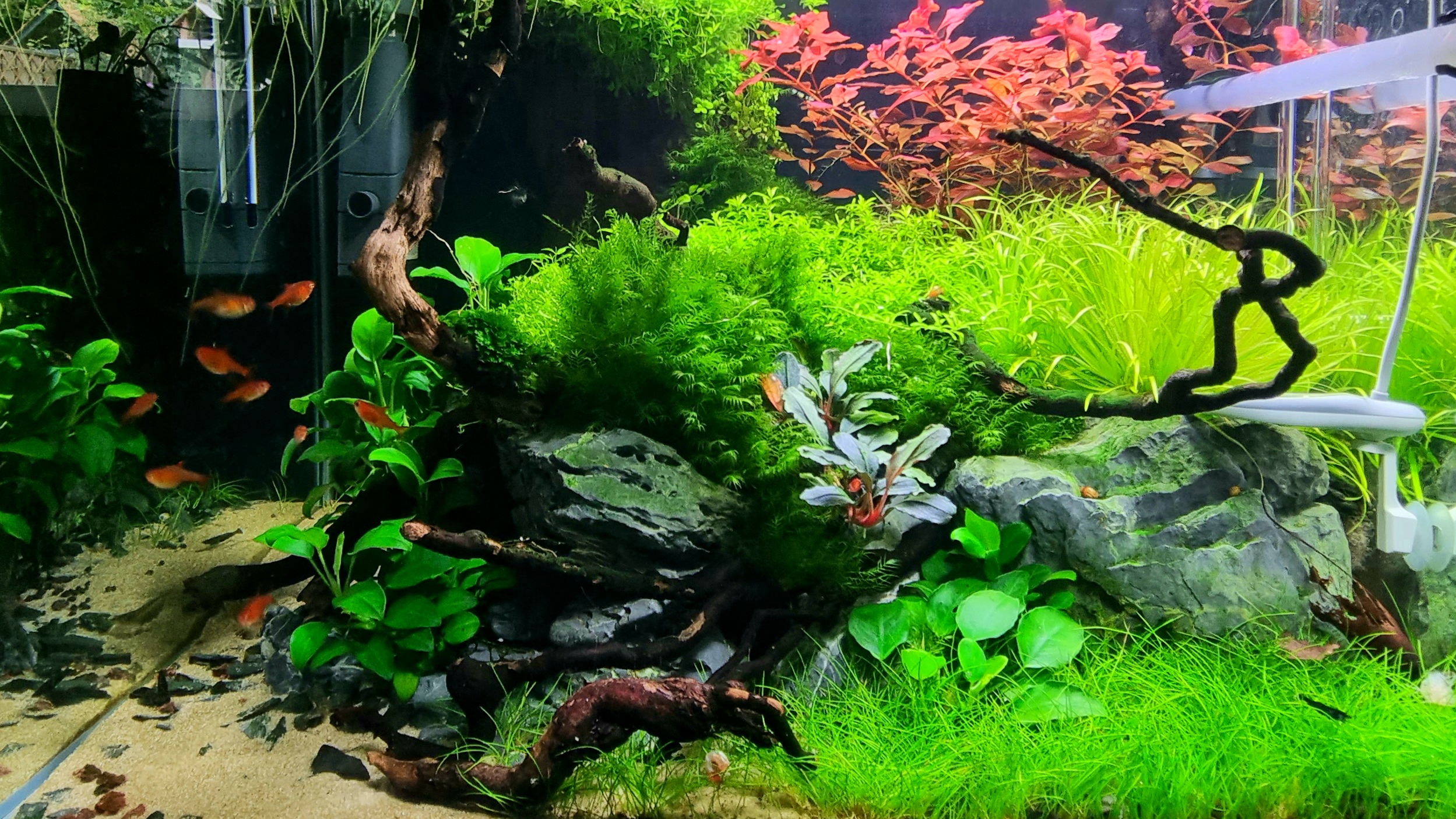 A decision has been made, and a new tank was ordered to replace this one. Slightly bigger, 80l, up from 50. Still easy to maintain, using mostly equipment I already have to save costs, but with slightly more options for stock. Now to decide on what to put in it! Still have a month or so before this tank will be torn apart to come up with a plan.

Having a bit more bba, GDA and GSA pop up over the last week, as I've done a big trim of the ludwigia which again upset the CO2 balance after the tank hadnt fully recovered from swapping out the diffusor. Looking forward to a slightly bigger tank so small things like this should have a little less impact. If I were to ever cut the ludwigia and the pearlweed back on the same night and not dial the CO2 back, I think I'd gass the tank, despite never aiming near 30 mg/l (using 20 mg/l co2 fluid).
Spot dosing some easycarbo again for a while on the bba on stones and wood, and removing some badly affected leaves with GSA. Think this is the most algae the tank has had since the start. Livestock seems happy though, shrimp out and about everywhere and the fish looking relaxed. 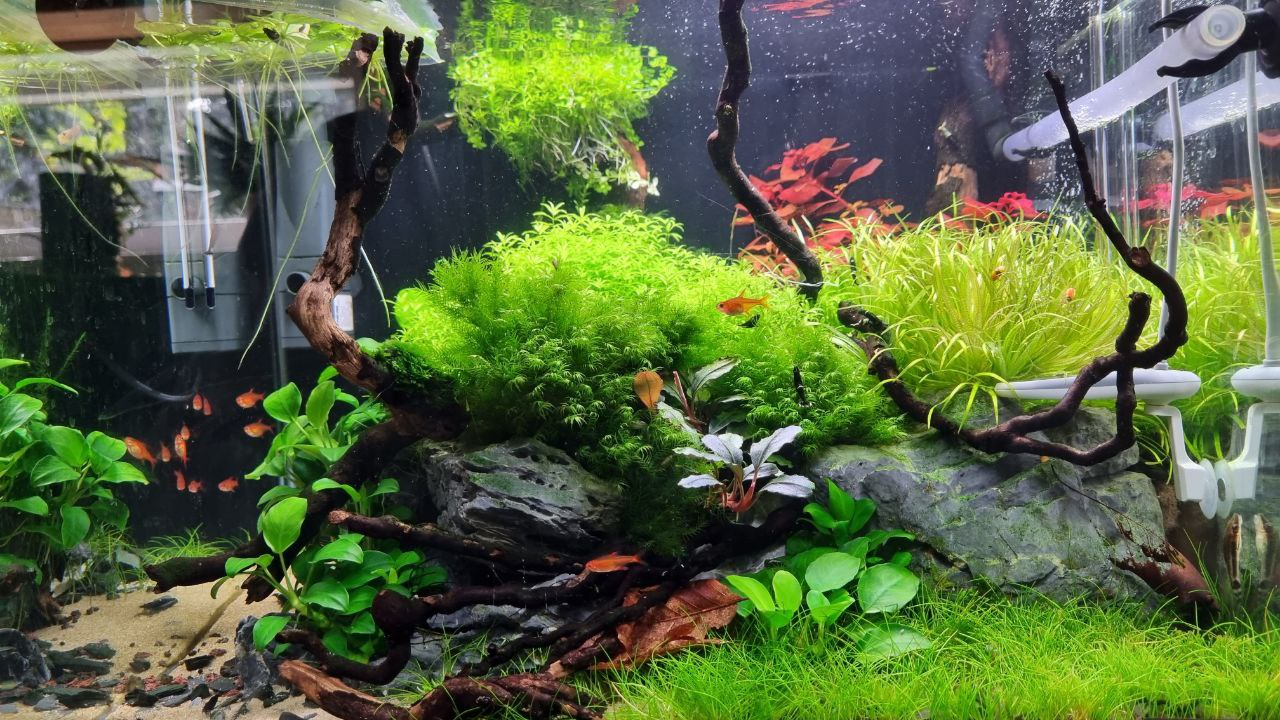 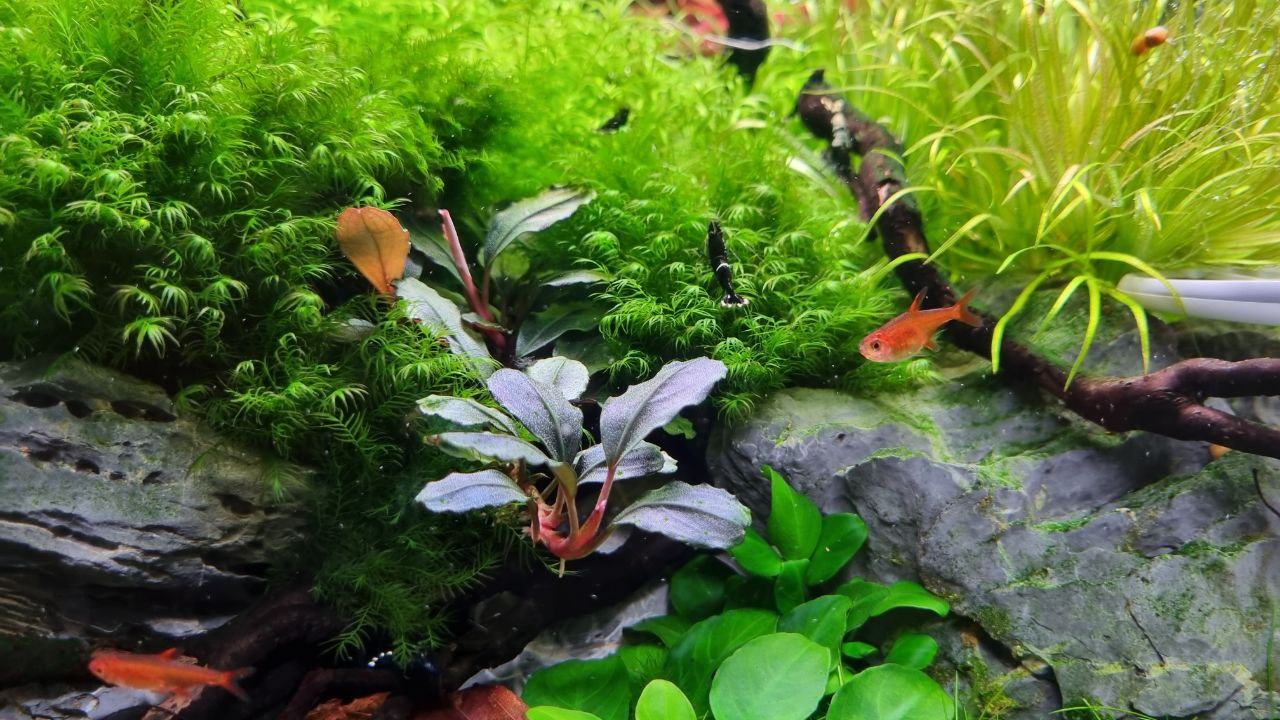