Today I received a surprise in the mail - a wee glass bottle full of seeds. I'd forgotten impulse buying this for £1.14 on eBay about a month ago, probably after a few beers, as I'd normally avoid this type of listing.

They were sold as "Glossostigma" seeds, here's the listing:

http://www.ebay.co.uk/itm/391509822507
I very much doubt glosso seeds are available this cheap, but am interested to find out what the seeds actually are. Would be nice if it's an aquatic species, I think this is unlikely though. There are loads of scam seed listing on eBay, my favorite are the "rainbow rose seeds"

I've put some seeds in a small plastic pot filled with carnivorous plant soil (peat+sand) as this is all I have to hand atm, it's under an 11w florescent on a north facing windowsill, and I'll post pics to let you know what sprouts .

Here is what I received, will update with more pics later: 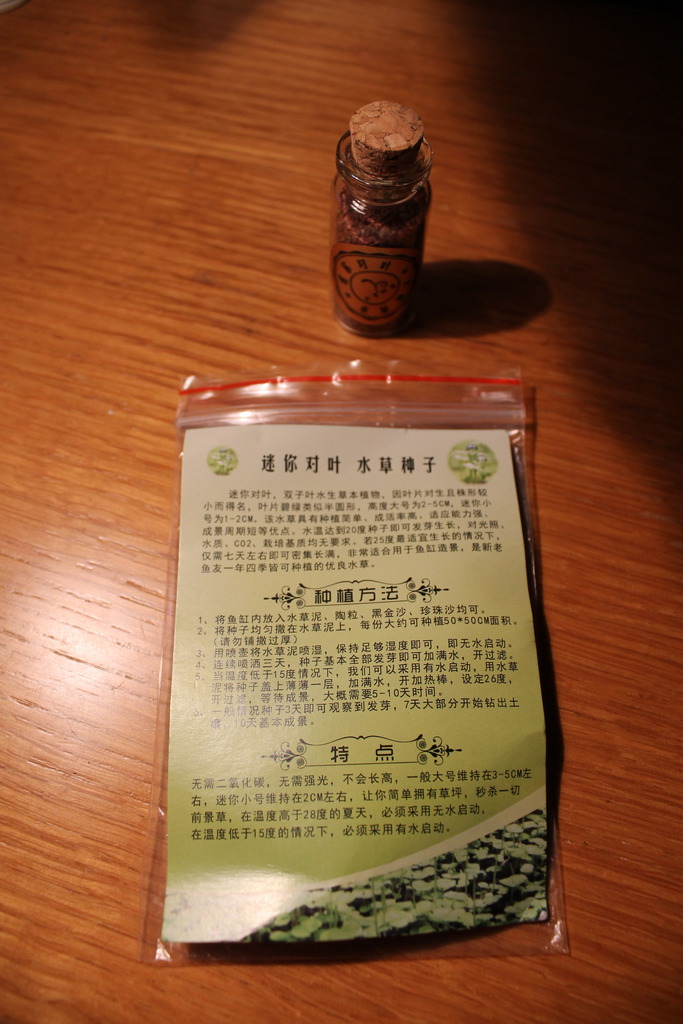 I've tried to translate the text using an app but no success so far, if anyone who speaks some Chinese could give me the gist of what the leaflet says, I'd be very interested to hear .

Not sure what they are,but I now fancy a sandwich . 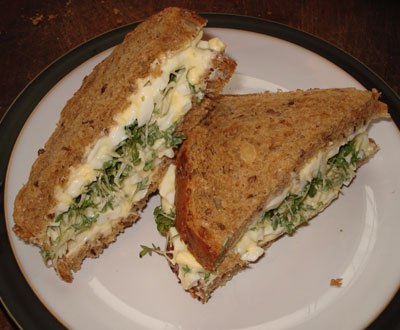 Most likely Herniaria glabra............."Rupturewort"
- used for quick carpeting inbetween rocks in japan-style gardening.
.........and Herniaria is not an aquatic!

Nelson said:
Not sure what they are,but I now fancy a sandwich .
Click to expand...

Hmmm, me too now, egg and cress is a favorite and that sandwich looks great thanks .


Mick.Dk said:
Most likely Herniaria glabra............."Rupturewort"
- used for quick carpeting inbetween rocks in japan-style gardening.
.........and Herniaria is not an aquatic!
Click to expand...

Will be interesting to see if it is this species, there was both small "S" and large "L" types available in the listing, so presumably two different species. I went for the "L" large size.
Last edited: 11 Dec 2016
F

I also bought the 'S' version for kicks.

I was gonna put it in my tank but once the seeds got wet they forms this mucusy slimy coating and all stuck together. I took it out but some seeds evidently remained. They look like this 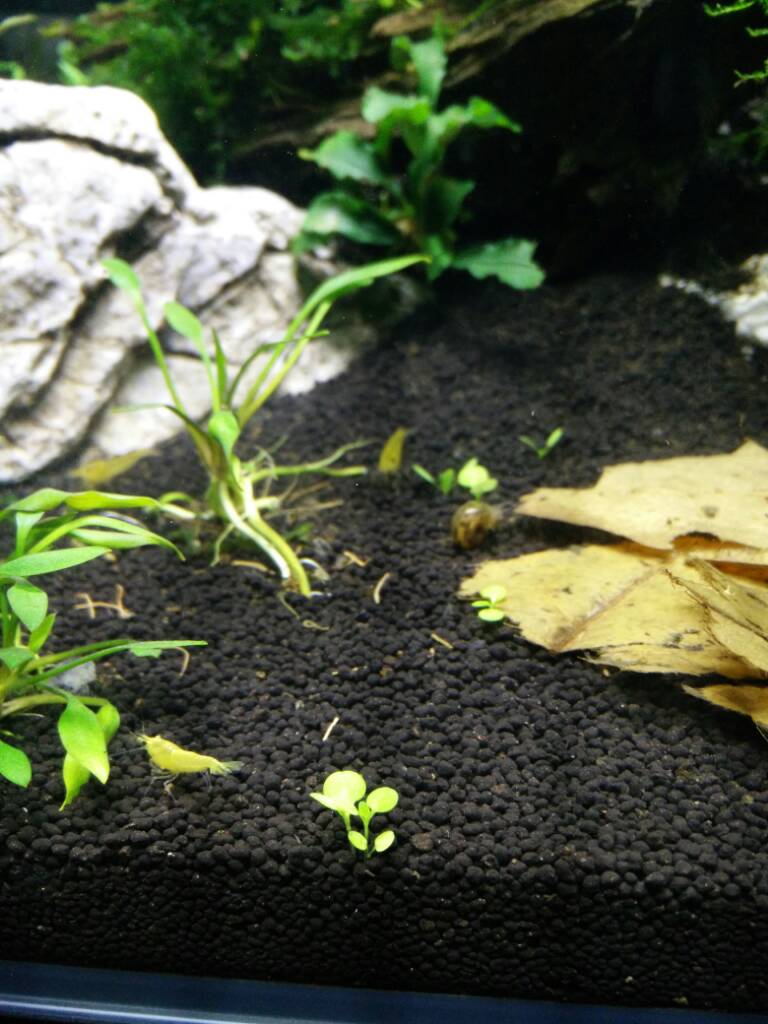 Kinda cool but definitely not glosso

Sent from my A0001 using Tapatalk

three-fingers said:
I've tried to translate the text using an app but no success so far, if anyone who speaks some Chinese could give me the gist of what the leaflet says, I'd be very interested to hear .
Click to expand...

I do not speak nor can read a word Chinese, but seeing the non Chinese symbols on the leaflet it obviousy is a guide with instructions about how to grow it.
A rough guess what it says with some logic 1+1 = 2, most likely for both types large and small,It is enough seeds to carpet 50cmx50cm square. Ample co2 is recomended at 15 to 26° C, S plant gets 2 - 5 cm large and place seeds 1-2cm apart.. L plant gets 3 to 5 cm and place seeds 2 cm apart.. In 5 to 10 weeks you have an awsome planted carpet making everybody jalious..
Cheers,
Marcel..
Tanks for watching.

Well, nothing sprouted, the windowsill may have been too cold though.

I also sprinkled some seeds into the tubs of water I have carnivorous plants in...the seeds just floated and went fuzzy with mould. I have no idea how funkycat got their seeds to sink, maybe I should have bought the "S" version.

I still have loads of seeds, so next I'll try some on some rockwool in a plastic pot attached to the side of a tank with suction cups.

The ones on rockwool have germinated, as have some that i sprinkled into a breeding net. Once germinated they seem to have neutral buoyancy, and the slimy/fuzzy seed casing separate from the cotyledons. I painstakingly planted the ones from the breeding net into a pot full of soil/sand in one of my tanks...only for the Amano shrimp to quickly gobble them up!

At least the shrimp can't reach these ones in a different tank:

I'm curious to know what the L grows into.

Hi, do you have an update to how these are growing. I too had a beer induced impulse buy of same seeds from China. They have just gone into a cheap second hand tank I have acquired along with some hairgrass seeds(paruva I think) and some star grass seeds(pelargonium)


Sent from my E6553 using Tapatalk

Watching with interest. I bought some "java fern spores " from Ebay a while ago, i have just sown them in the last couple of days, not entirely convinced that they are actually java fern spores but for £2.99 delivered i thought it's worth a try. I believe that if genuine they can take some time to germinate, would be interested to hear if anyone else has tried these and what if any success was achieved.
S

So the hair grass is germinating well, no movement on the other 2 as yet

Update - slowed in growth and starting to go slightly yellow, I have it in a heavily planted goldfish tank, floating/submerged plant growth is so fast under my high lighting +micro ferts that the API test results look like 0ppm NO3. I don't trust the results from most test kits, but was surprised at the yellowing so thought I'd test just to see if NO3 was on the high or low end of the scale (can't trust the exact value).

Look's like I'll have to add macros to the tank or repot into soil on a windowsill. 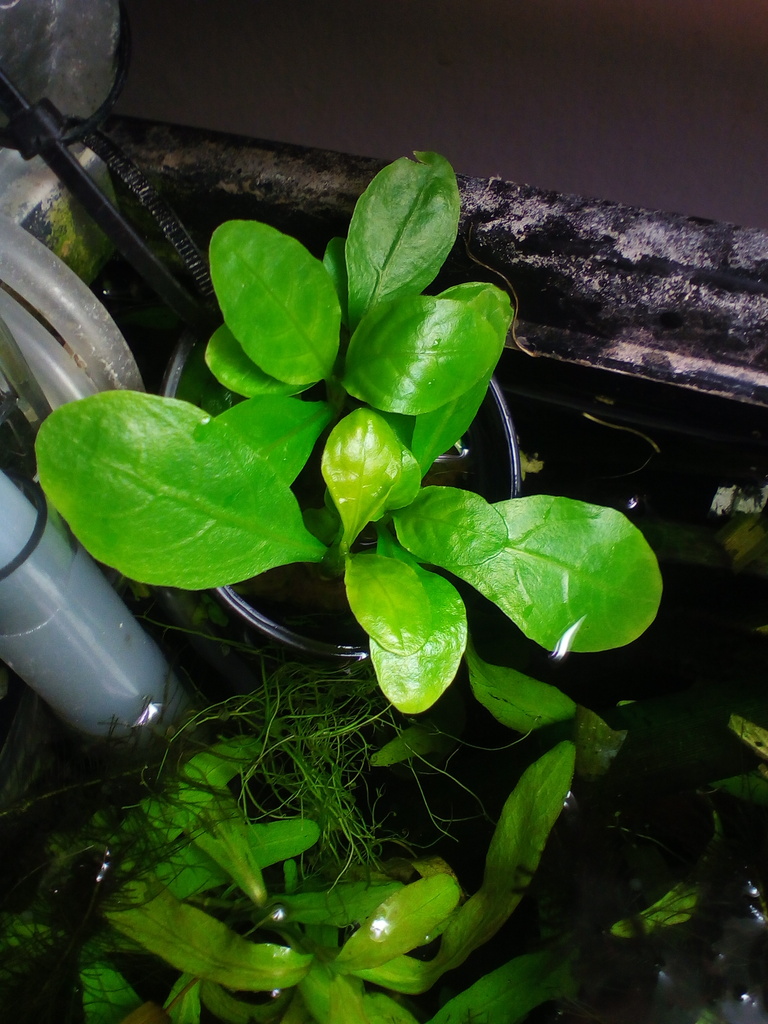 Hmm that doesn't sound too promising for my project! But as they are sown now I'm gonna ride it out and see where it leads. On a plus the hairgrass has reached 3inches tall in 5 days. But will have to see what the counterfeit Glosso ends up like 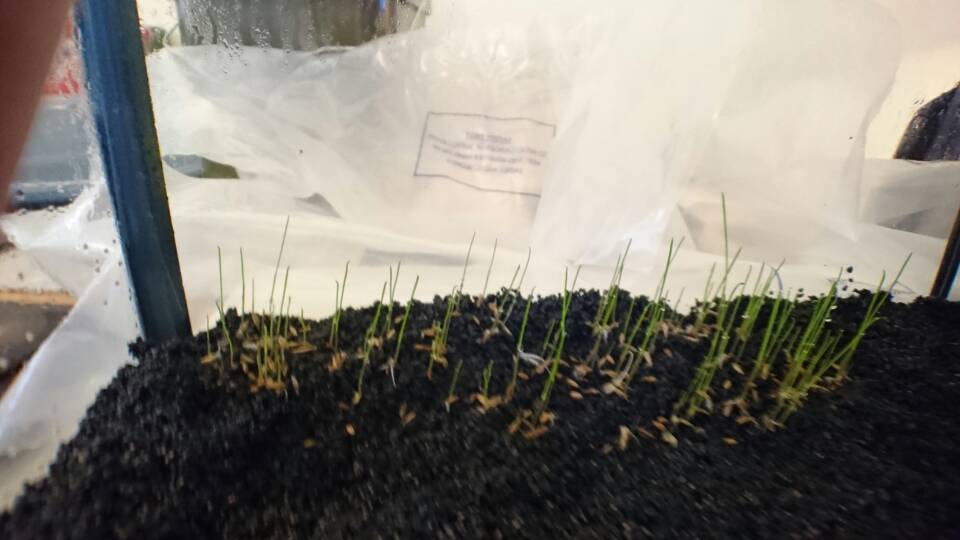 Definitely not Glosso! Wouldn't be surprised if it develops a daisy like flower

i bet the people selling these are laughing thier socks off. More and more iam wondering what i have , if I'm lucky i might end up with some kind of fern , just not java

Looks like lettuce seedlings, but they could be plenty of other plants. 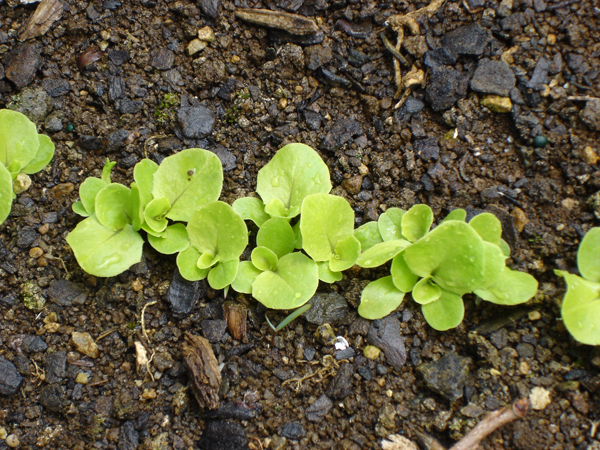 Stuart Deavy said:
On a plus the hairgrass has reached 3inches tall in 5 days. But will have to see what the counterfeit Glosso ends up like
Click to expand...

The "hair-grass" is a real grass (Poaceae).

The grass "seed" is a fruit (<"Caryopsis">), but Eleocharis species (below) are from the <"Cyperaceae"> have a little black fruit like a sedge (Carex). 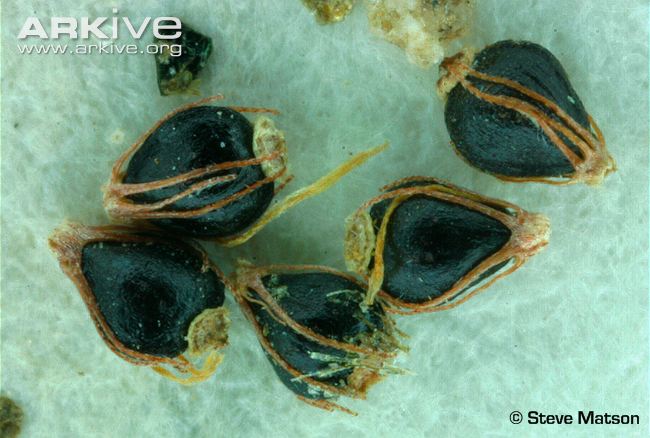 A thought occurs that if I wasn't too scrupulous about what I was selling as "Glossostigma" etc. agricultural seeds would be a good option as they are cheap to buy and will germinate quickly, with a high percentage germination.