Hi, I’m wondering if you can confirm something for me please?

I have just ordered and received some of your tissue culture Rotala Rotundifolia green from a 3rd party seller, and it has arrived looking like this: 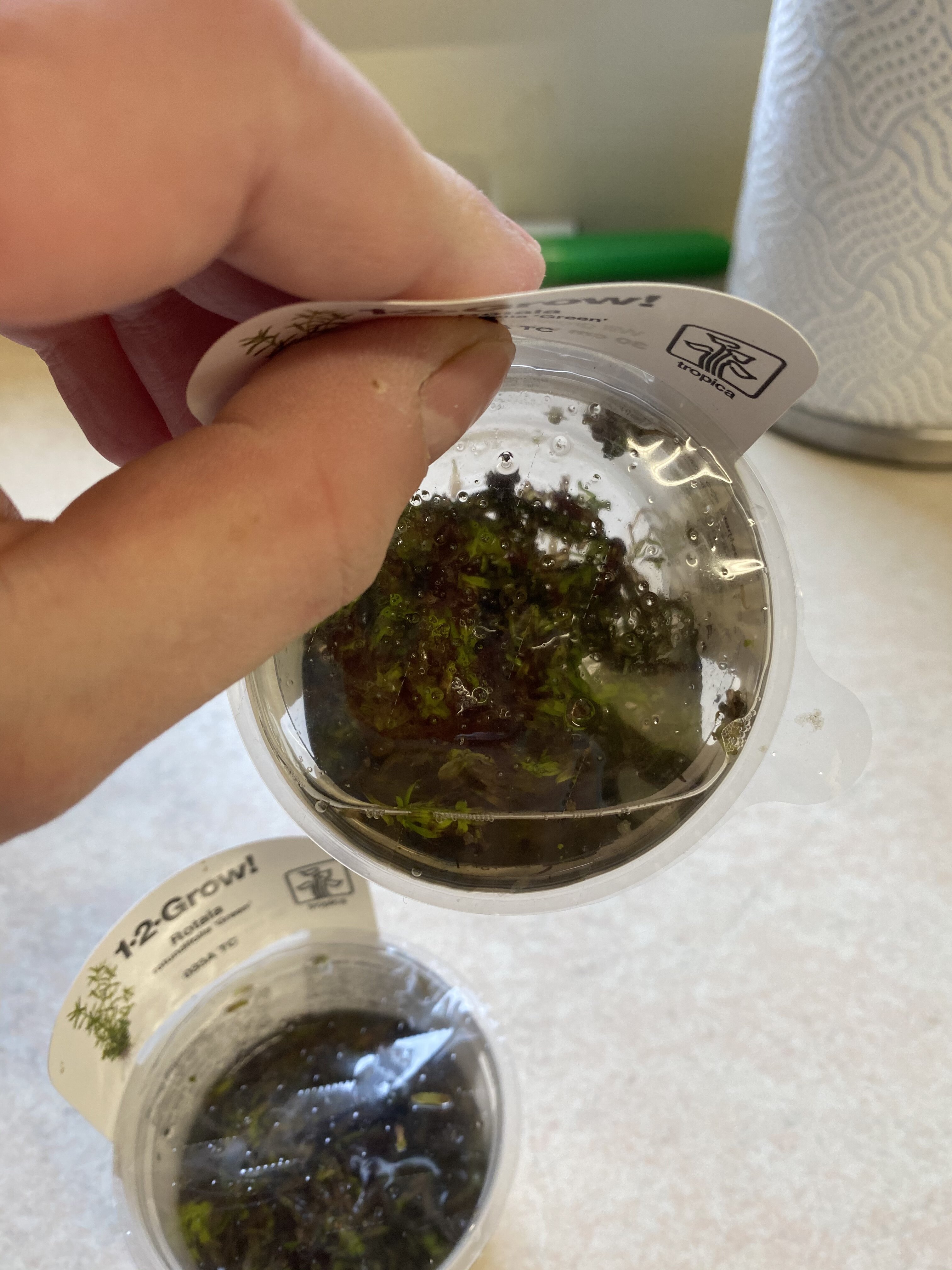 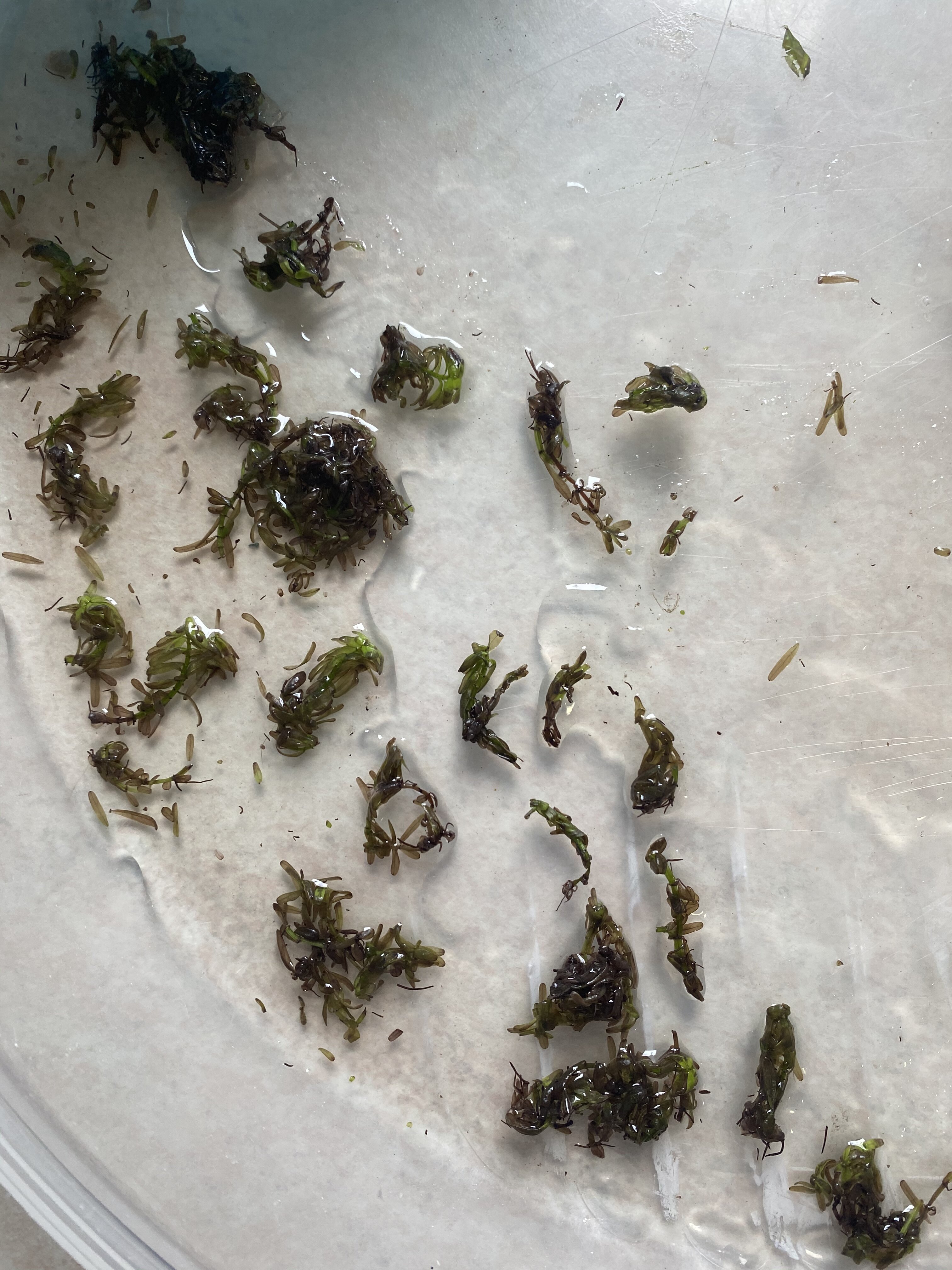 To me it’s obvious that this plant has not travelled well, and has arrived in very bad condition, so I have complained and sent pictures to the seller, only to be told this is normal and to just plant it and it will be fine. My instincts and experience tell me that this is not the case, and there is little hope of survival.

I’m not naming the seller at this point, as I have again replied back and disagreed with the initial response I received that it is fine and to just plant it. I’m awaiting a response, and am hoping that they accept that this isn’t right.

I don’t claim to be an expert, but I do have some experience of tissue culture plants and this doesn’t look normal to me. It looks dead. The leaves are all brown and detached, and the stems are brown and mushy. There are no discernible structures left in the pot that I could even plant to give a chance as the seller has suggested.

Can you please have a look at this and tell me what you think as the grower? Surely this is not a healthy and normal tissue cup of plants as it has been suggested?

For clarity... The Seller is not a UKAPs sponsor either, but none the less is a well known reputable shop.
S

Looks dead to me. I had a pot of helanthium tennelum that looked identical, brown, limp and mushy from pro shrimp. They never got back to me.

Tell me about it. I had a similar batch of 7 pots of rotala macandra recently, that looked bad, but to be fair were in better condition than this. So around £40 worth. I didn’t say anything immediately, and planted it hoping it would take, and within 3 days it was floating mush in my tank. This was from a different source and when I emailed, I was refunded, no problem straight away. I got some more that still looked a bit ropey, but not so bad, and luckily this has taken and is now growing great.

But with this, I’m not being funny, but I’m not sure exactly what they want me to plant and give a chance to? There is nothing that will even go into the substrate, even if I wanted to put this in my tank (which I don’t)

That is NOT normal and is not acceptable quality. Get your money back.

Unhealthy plants will not establish well and will only cause algae or melt. 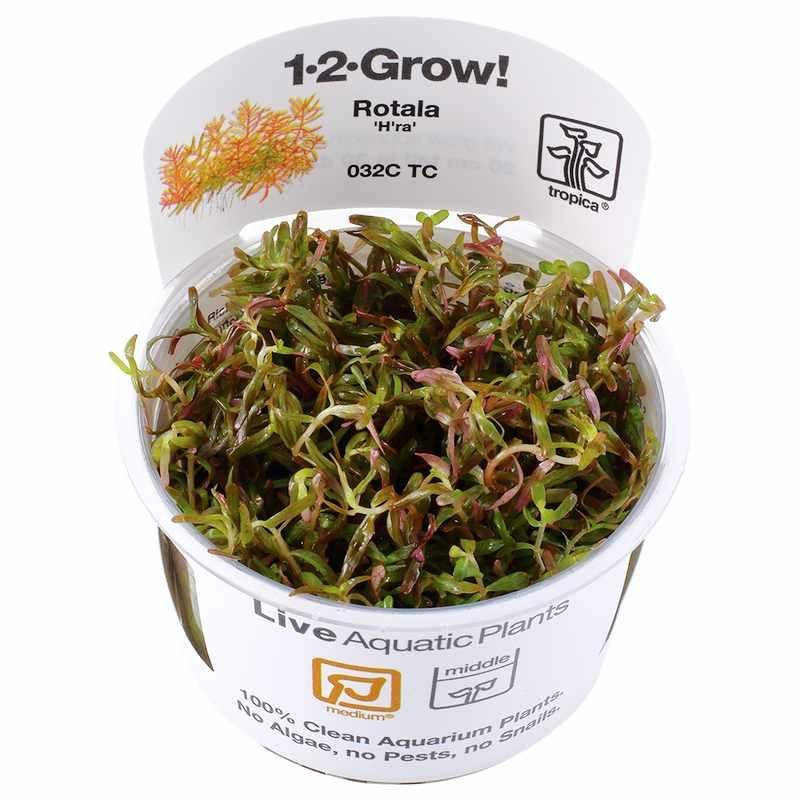 This is what the pot is supposed to look like.
How much wood could a woodchuck chuck if a woodchuck could chuck wood?

Hi
They shouldn't be sending out aquatic plants in that condition.....obviously to everyone that has ever bought Tissue culture/Invitro plants knows what condition to expect within reason!
Those pots are way past their sell by date.............those are only fit for the compost heap

Certain vendors seem to be doing this on a regular basis of late. You could possibly understand in these times of "The great plant crisis" that quality is going to dip a bit, that I'll accept, but some of the stuff they're sending out is awful.

I got a pro shrimp delivery yesterday and the plant quality was mediocre, tub of tropica frog bit went in the bin.
The last couple of aqua essentials orders i've received haven't been up to the usual high standards but going to give them the benefit of doubt till the next order arrives.

I'd see what reply you get back regards a refund and if non is offered name and shame them.

Is there a sell by date on the pots?

That is extremely poor and I'm sure Tropica would be mortified. To add further insult to injury it sounds like the quality of their after sales service is equally poor. You'd be doing us all a favour if you did reveal who the retailer is. I certainly don't want to risk buying from them by mistake...
.
Aquazeitgeist. YouTube
A Brief and Incomplete History of Aquascaping. Soil Substrate Planted Tank - A How to Guide
Schism Reimagined. NatureScape. Return of the Shallow. Windswept Eternity, Primordial. The Dark Side or What Lurks Beneath

I had a Tropica pot like that from an eBay seller, a few months back - it was supposed to be S Repens, so nice and green, but it arrived as brown mush. They also tried to tell me it was normal and float it in the tank for a while lol

After I’d finished laughing at the suggestion, I asked them to send me a replacement, and couldn’t believe it when they sent me another one out exactly the same! Needless to say I got a refund.

No one should be willing to accept plants like this of such sub-standard quality, nor putting them in the bin and accepting the loss - they’re not exactly cheap. I had an issue with several plants in my last order from Proshrimp also, and had to insist on replacements from them.

@aquascape1987 you should definitely name and shame as Tim suggests.

Yes, not as if they are a couple of £s!
This is one of the reasons I like to try and purchase plants from members on here.

Wookii said:
I had an issue with several plants in my last order from Proshrimp also
Click to expand...

Thanks for the replies guys, and also the external validation... I was already confident that I hadn’t got it wrong about these being dead, but have to admit I was questioning myself for a minute, when I got the reply back that this was normal from someone who sells plants day in, day out.

GHNelson said:
They shouldn't be sending out aquatic plants in that condition..
Click to expand...

Yea I fully agree. I have to give them the benefit of the doubt that they didn’t look like this when they dispatched, although I do suspect that they were pushing it with the sell by date. The plants arrived within 18 hours of ordering, so unless they got baked or frozen in transit I doubt that they can have deteriorated this much in such a short space of time. If they were like this when they were shipped, it must be the seller pushing the sell by, as I know that Tropica only get paid by shops upon arrival of their plants, alive and well. Tropica take the risk on their shipments in other words, so there shouldn’t be an excuse for sending out knackered plants.

Still waiting for a reply, but I’m definitely going to scorch the earth by naming if they don’t refund! Again, benefit of doubt that the photos I sent in the cups may not have fully illustrated how bad they were, but if the answer is no refund after I sent the ones with the plants on a plate, there really isn’t an excuse in my eyes.

GHNelson said:
Is there a sell by date on the pots?
Click to expand...

Can’t see a sell by date, it just says use within 30 days on the back of Tropica pots, but no dates.

Tim Harrison said:
That is extremely poor and I'm sure Tropica would be mortified
Click to expand...

That’s why I posted on here, as I thought that if I had confirmation that they weren’t acceptable from the horses mouth, it would help my discussion with the seller. Although it looks like Tropica don’t log in here very often, I’ve since realised from a quick look on their profile.

Ive had lots of bits from pro shrimp in the past and never any issues myself. Never any plants though! This isn’t from them so cant comment in respect of some of the issues others have had with them mentioned above.

Anyway, I’ve just returned from a 150 mile round trip to Horizon Aquatics to get two decent pots of rotala green. The difference in quality from what I’ve just picked up at Horizon, to what arrived in the post from the other company is about one million percent. Horizons are actually alive for a start, and they are all green and standing up!

Sounds an extreme measure for 2 pots of Rotala green, I know.... but I’ve been very irritated that it’s took over 3 weeks since the main planting to get my scape fully finished due to current issues with sourcing plants. I’ve had little gaps for the past 3 weeks where plants weren’t available, and this morning I’d had enough! So I called Horizon who had some in stock, and I bit the bullet and drove up. And glad I did, because now my scape is finally complete

I reckon Rotala Green tissue culture is possibly the rarest plant in the UK at the moment. I’ve failed to get my hands on it for weeks now. I’m assuming that this is because this is a popular ‘common ’ plant, and with the shortages, it just goes out of stock in most places as soon as it comes in. Try a Google search and you’ll see what I mean! Excluding Horizon of course, who I know have some because I’ve just been

Anyway, I’ll update once I get a response

Thanks again for the validation everyone

aquascape1987 said:
Anyway, I’ve just returned from a 150 mile round trip to Horizon Aquatics to get two decent pots of rotala green.
Click to expand...

Mate, this scape has been psychologically eating me alive with trying to finish it due to the Brexit plant situation, then issues like this with thinking I had the final plant, then it arriving as mush. The gaps have been driving me insane because 99 percent of it is in and growing. So frustrating!

I reckon I’d have got on a plane at Manchester Airport if someone had told me they had some Rotala Green in some far flung country, the way I was feeling about it this morning

aquascape1987 said:
Mate, this scape has been psychologically eating me alive with trying to finish it due to the Brexit plant situation, then issues like this with thinking I had the final plant, then it arriving as mush. The gaps have been driving me insane because 99 percent of it is in and growing. So frustrating!

I reckon I’d have got on a plane at Manchester Airport if someone had told me they had some Rotala Green in some far flung country, the way I was feeling about it this morning

Loss of partner from spending the holiday savings: Divorced

Filling that 3cm square space on the back left between the Sieryu Stone and the manzanita . . . . PRICELESS