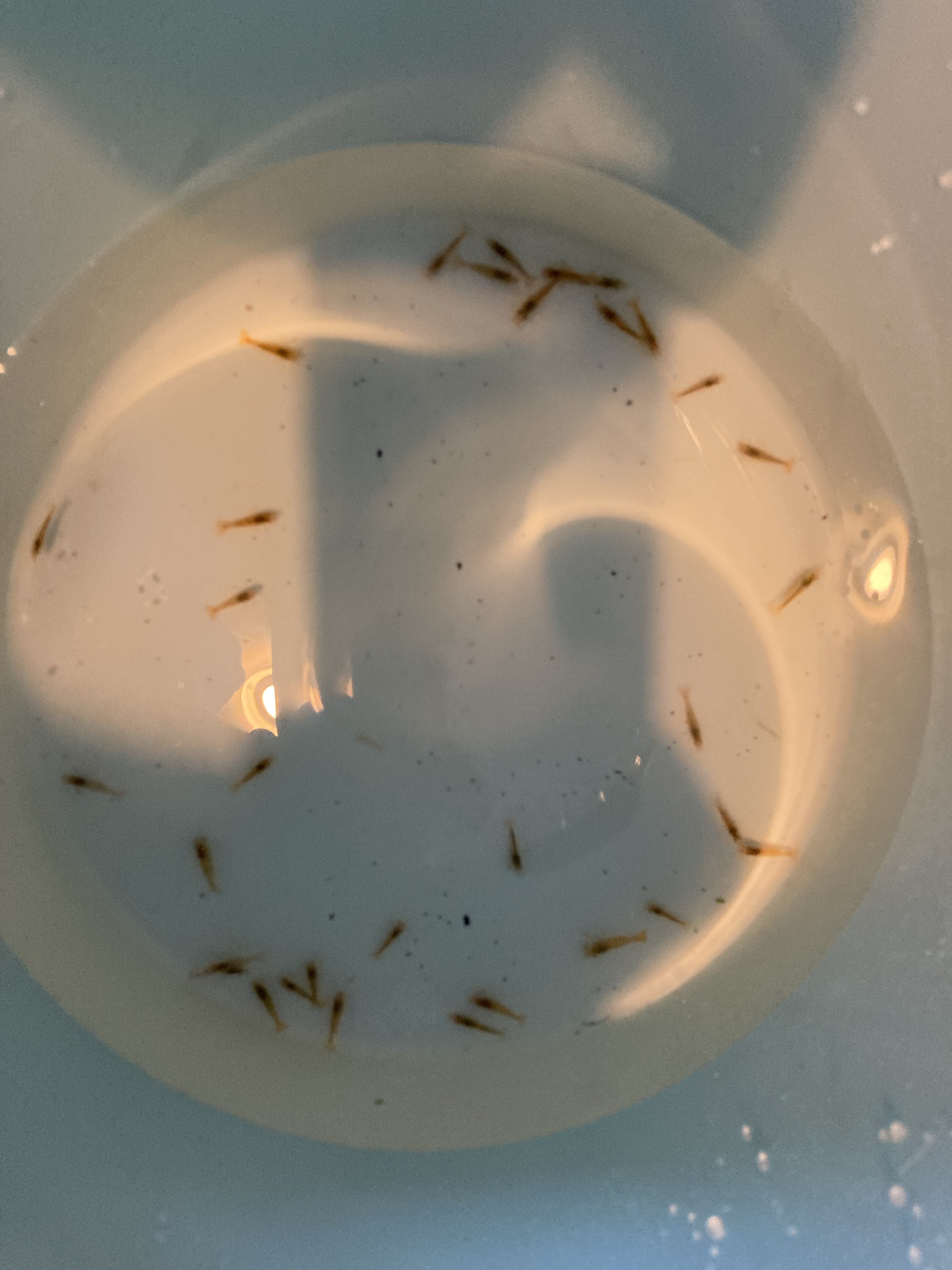 The shrimp I intended to add to my pseudo 45p arrived. After drip acclimating them there’s now 30something tangerine tigers to go with the shrimps I tried not to add, my black rose cherry breedjects.
Don’t believe the hype.

Så! About that bigger tank… I just placed my order for a 60x40x36 (the biggest tank I can fit in the space I have) and this one is looking for a challenge so throw me some inspiration for a tank or scape or photo you wish you could capture in a little glass box.
Don’t believe the hype.

What a difference a week makes, the 45f seems to be rounding a corner. From nowhere some blades of ug have started to pop up into small plants. If I can keep the tank stable I’ll split every plant into blades and see if I can’t get it to work. I have to order some stuff this week so if it all vanishes within a couple of weeks I’ll likely plant the tank with hc. The other thing is something is eating all my p helfri. I suspect it to be the snails so I’ve been on a remove on sight erradication program to try and fix it.

The cube too, seems to be coming into shape. Still need to work on the trimming pattern but over all it looks okay. In this tank too something is eating all the p helfri. I’ll likely remove it and just top and replant the h arauigia to build up the mid ground.
The excel dosing is doing nothing to fix the staghorn in this tank, the limno Vietnam and the kedegang are just getting swamped. Ill swap to every other day 10l water changes to try and fix it as excel didn’t touch it. To my chagrin the raccoon tiger shrimp in this tank are extremely timid which is a shame because they’re stunning little guys when I do see them. Their eyes “seem” much less developed than say cherries so I think they might be rather photosensitive. The amanos true to their trickster nature insist on burying the hydropiper carpet by the end of every other day.

And the 45p is well, changing. Not really for the best I’d say. I’ve been topping and replanting all the stems that bolt but the more I look the more staghorn I see starting. I put this down to putting off cleaning the pipe work for about a month too long. I’m loath the go scissor mad when all the slow growers are only just establishing but I think it might be the only option as I can’t use excel with their being Ricardia and mini Christmas moss which in my experience really aren’t happy to get into contact with the stuff.

You can at least see the roughly triangle composition Im aiming for. The c helfri seems especially susceptible to stag horn, it also is in the wrong place in the scape so that will get pushed behind the wood more and more in line with 1/3rd position, right now it’s too central. I’ll also keep pushing the stems towards the triangle composition I had in mind. I’ll also siphon off the sand and replace it in a month or so, the amanos carry substrate out from all over the place only to dump it on the foreground and magnet fishing it out is a chore.

At a distance the tank looks great but I can’t get a decent photo of anything. 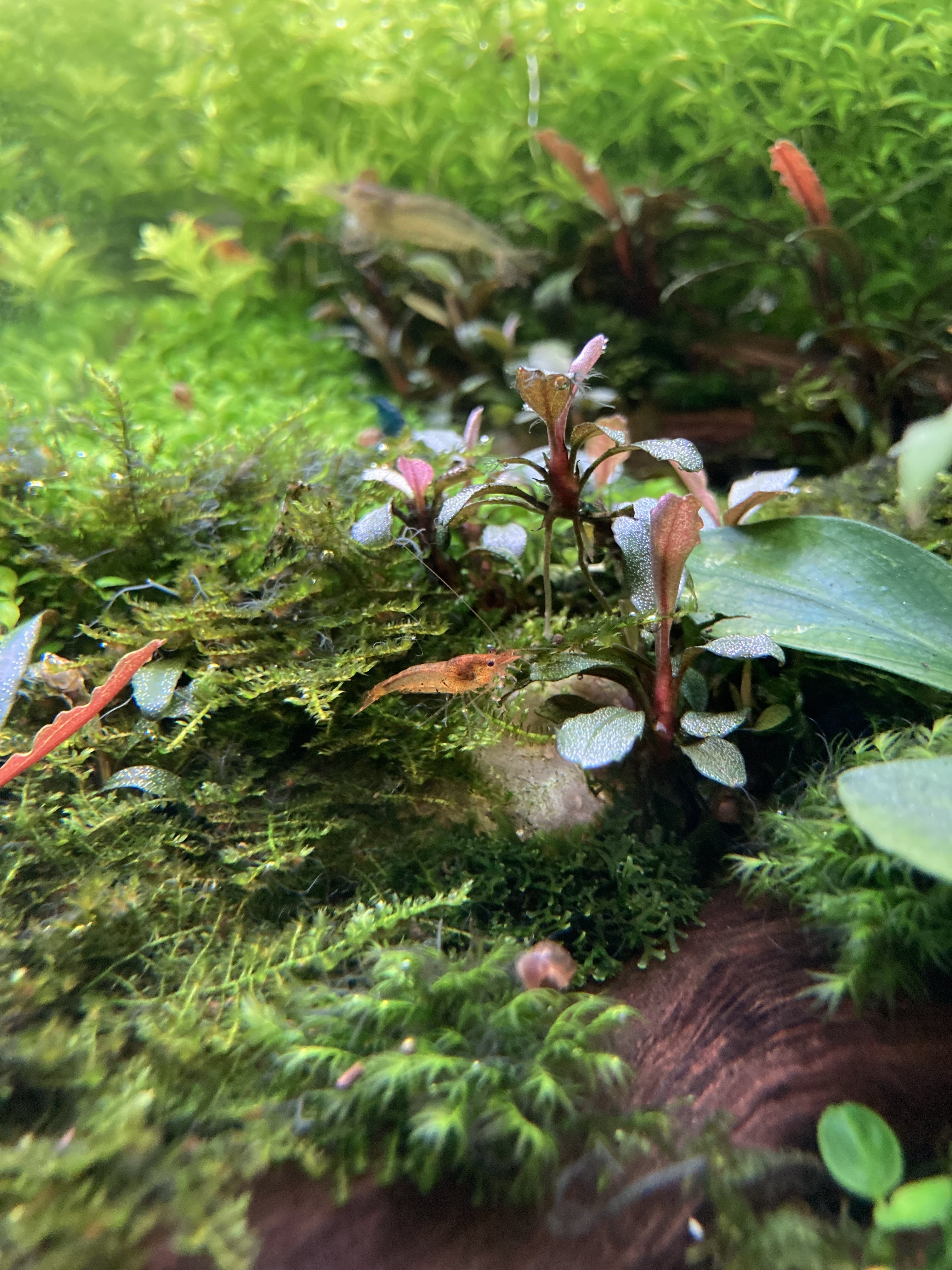 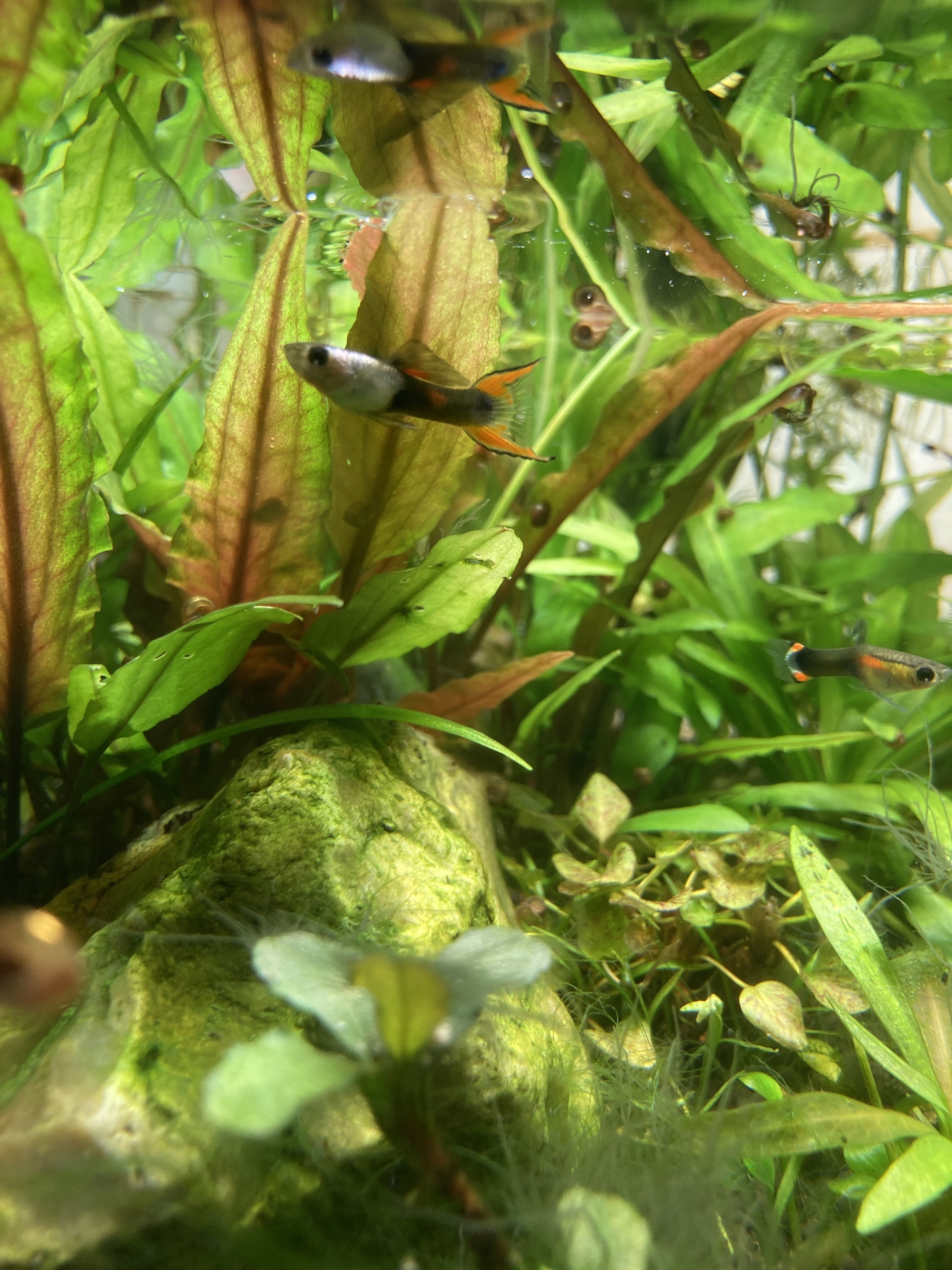 And well the pond remains an algae and endler farm, really it needs rescaping the role of “place to dump left overs” hasn’t been kind to the overall aesthetic.
Don’t believe the hype.

pretty plant this one, shame it over powers the cube a bit but maybe it’ll be fine for a bunch more colour in the 45p? 🤔

Garuf said:
pretty plant this one, shame it over powers the cube a bit but maybe it’ll be fine for a bunch more colour in the 45p? 🤔
Click to expand...

Yup, it’s one I got from a plant nerd here who called it cf. jibacoa because it was meant to be collected there, it’s “meant” to be more pink than the usual one but I can’t tell the difference myself.
Don’t believe the hype. 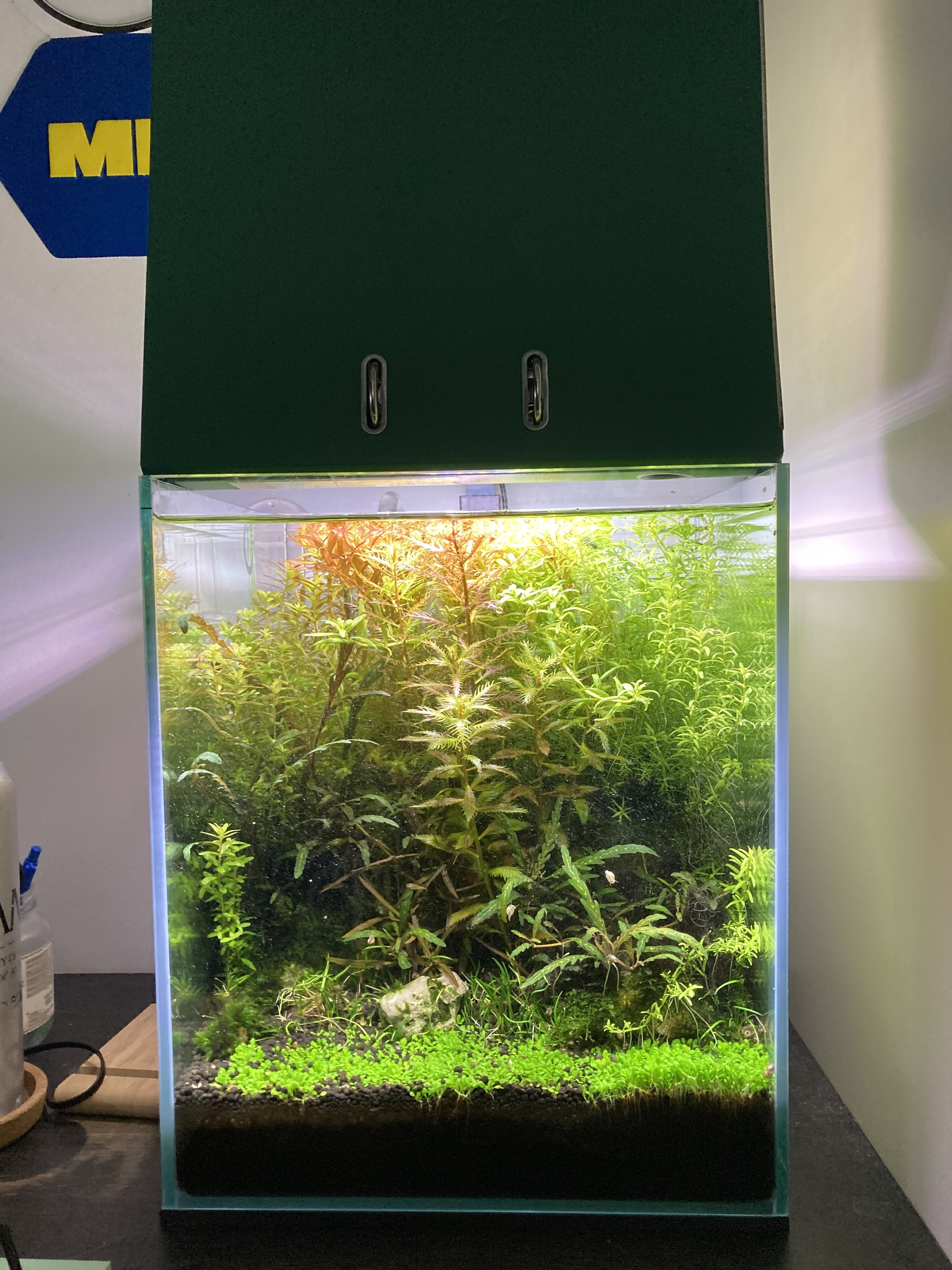 Carpet is nearly there, will be due a trim in a couple of weeks to make it all the same density.

Light spread isn’t so good with this light but it’s to be expected with this style of lamp and I’m not unduly worried, there’s nothing hard to grow.

I’ll trim this one on Wednesday to go with the midweek water change and see if I can’t compensate for the poor light spread with some creative trimming. Worth a go anyway. If not I’ll swap the h’ra to one of the prettier/slower stems (prolly Ludwigia arcuata) to try something new. I’ll be adding a persicaria sp or two new pay cheque to try before planting it on into the pseudo45p to assess suitability as a foil to the c helfri.
Don’t believe the hype.

Or a different rotala sp, could be nice to try. Maybe a macandra variant?🤔
Don’t believe the hype.

Going through some plant health tribulations lately which has been very frustrating especially with the outright crash of my 45f again.

To keep spirits up and act as a consolation prize, I started working on a little something to play around with a more “all the details”type scape.
Oh. I also bought a 55l scapers tank to do it in… a fool and his money etc. 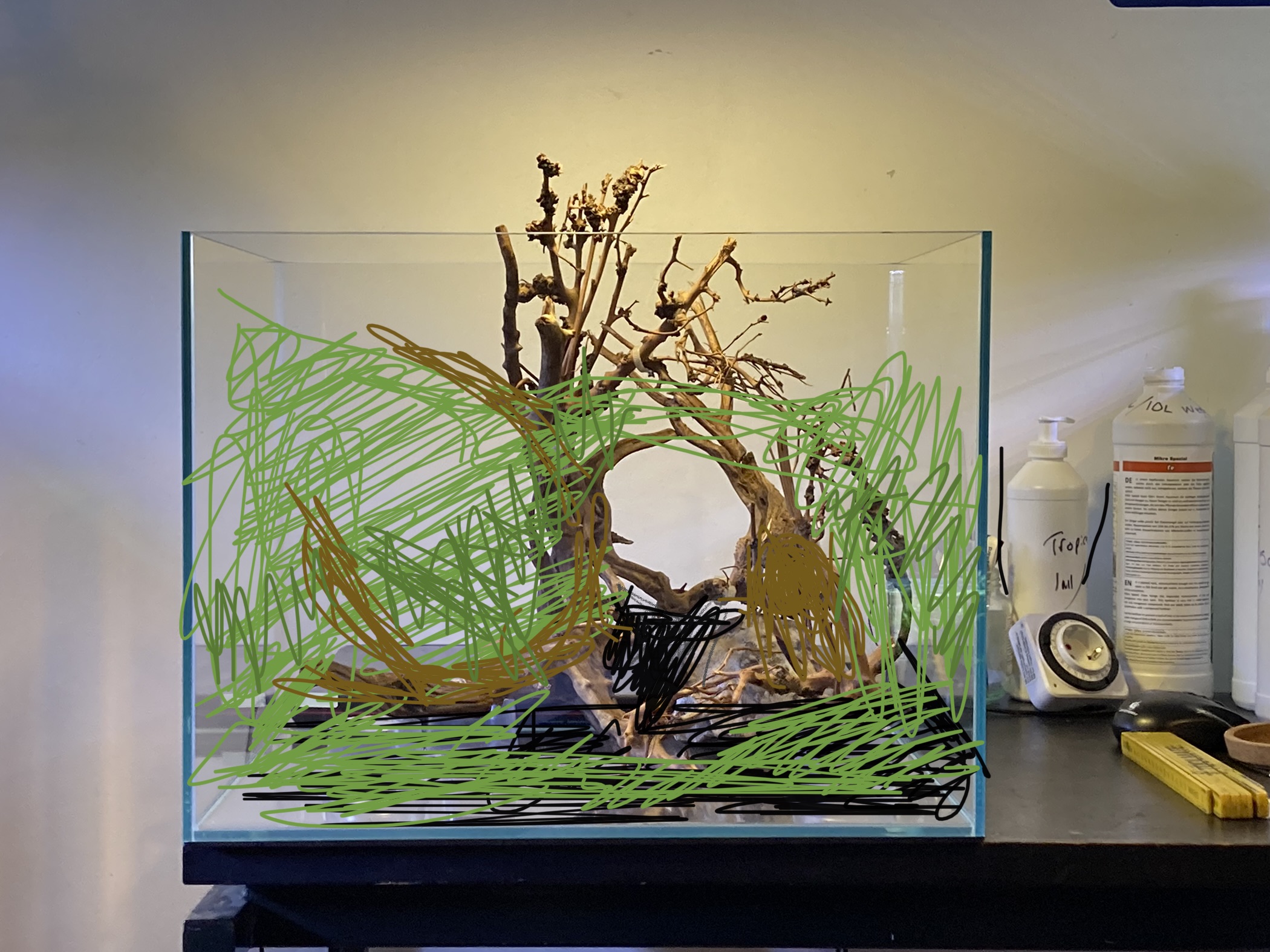 And here’s the basic thoughts.
Don’t believe the hype. 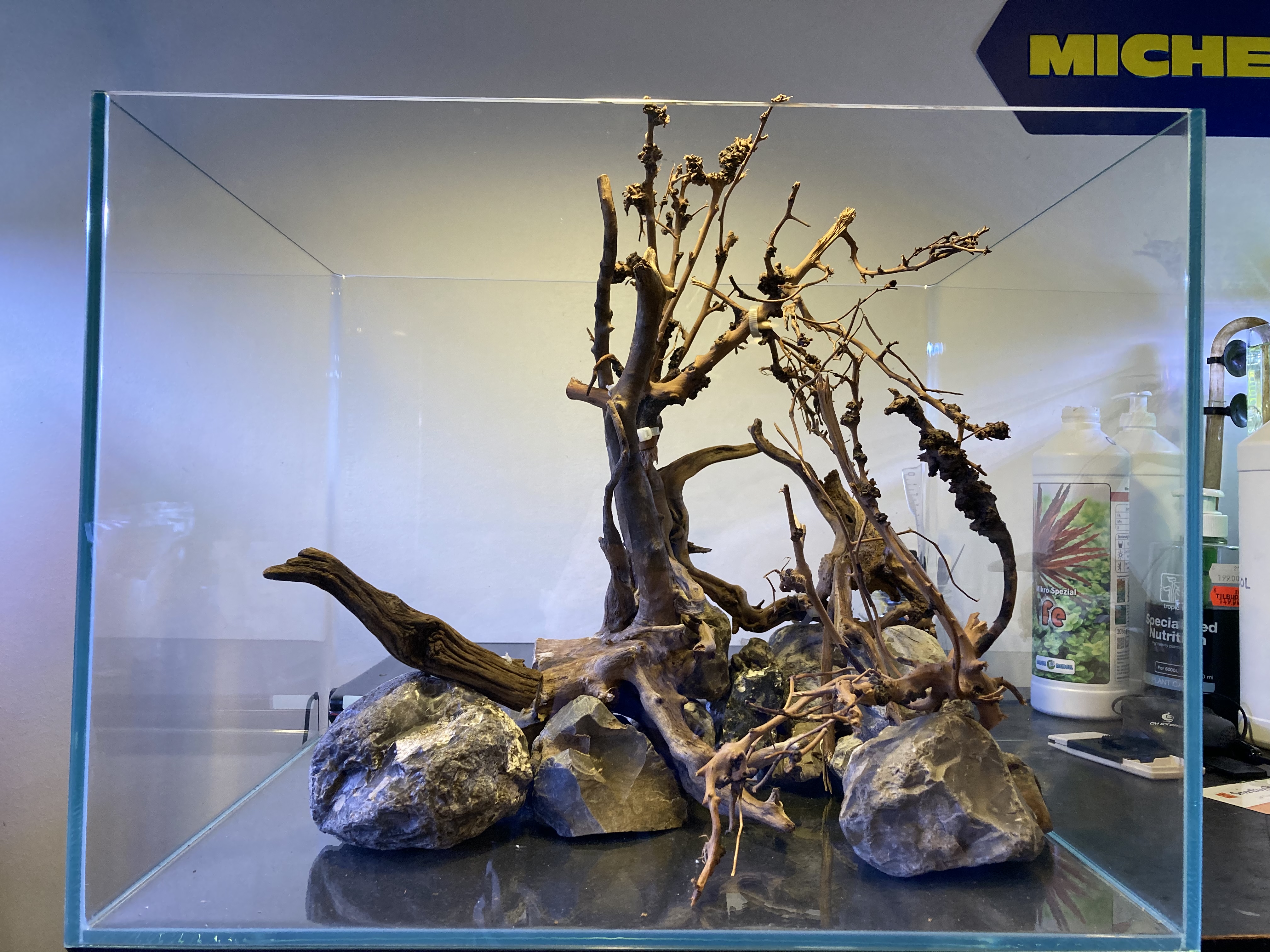 Kept working with the rough wood and swapping in the stones. The idea will be that this scape is another “bowl” aquascaper with a hidden foreground in the central area. 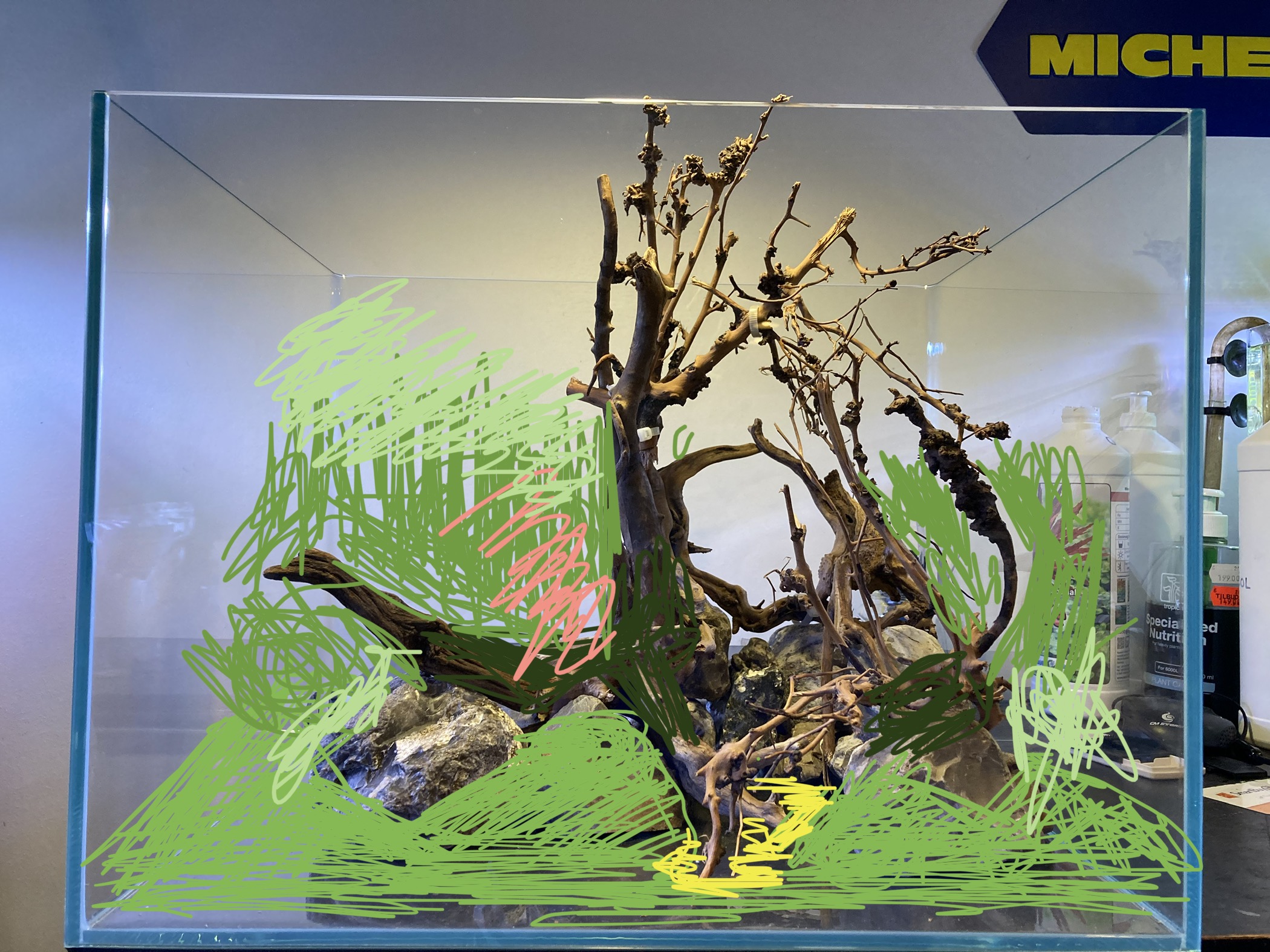 Talk about back with a bang! nice thread Garuf!
keep on keeping fish

Angus said:
Talk about back with a bang! nice thread Garuf!
Click to expand...

Well, y’know… I had some good luck with my first 45f and I found the love for wet plants again. My intention was 1 iwagumi, 1wood scape and then swap between nature and diorama adjacent to learn how things work.

When I ended up with enough plants to plant my cube too it became a farm to see how stuff grows and master healthy growth before moving plants around to other scapes.

This thread is really just me talking to myself and posting very poor quality photos. More power to you for going through it!
Don’t believe the hype. 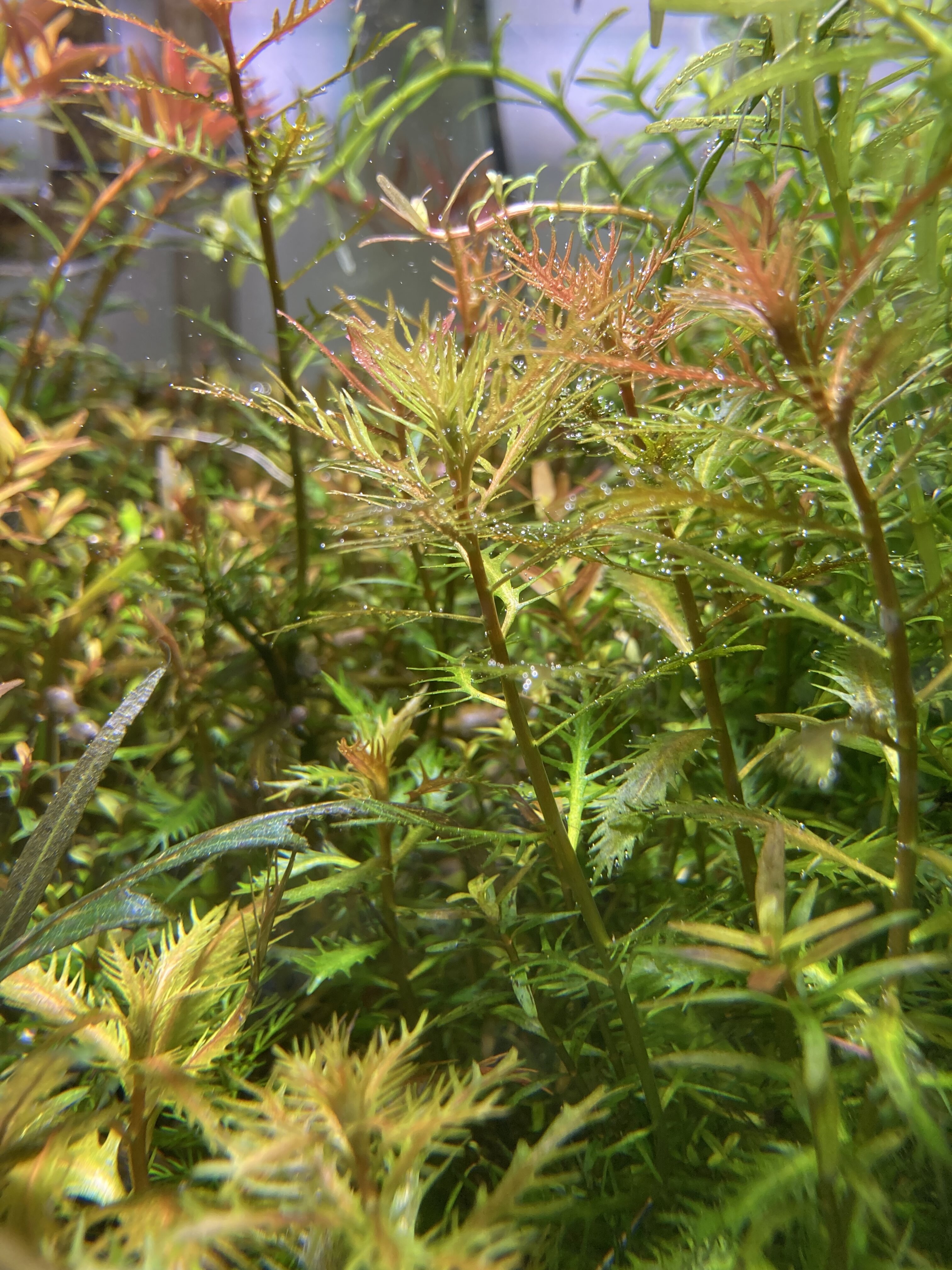 I have one surviving stem of P. Palustris in my tank (the rest are happily converted to emersed growth in my HOB filter) and I'm still figuring how red it can get. Are you doing anything special to turn it red, like nitrate lmitation?

Nope nothing at all.
It’s such a co2 hog that it makes a great indicator species other ferts it doesn’t respond clearly to, if anything it’s colouration is related to light more than anything else, it tends to get ratty rather than go red if you go too lean.
My advice would be to just give it a lot of space around it, it hates being crowded and will sulk if you do and let it do it’s thing.

My species isn’t the usual p.Palustris, it’s one I got that was collected in Cuba by a hobbyist and then passed around - it’s supposed to go more pink than red.
Don’t believe the hype. 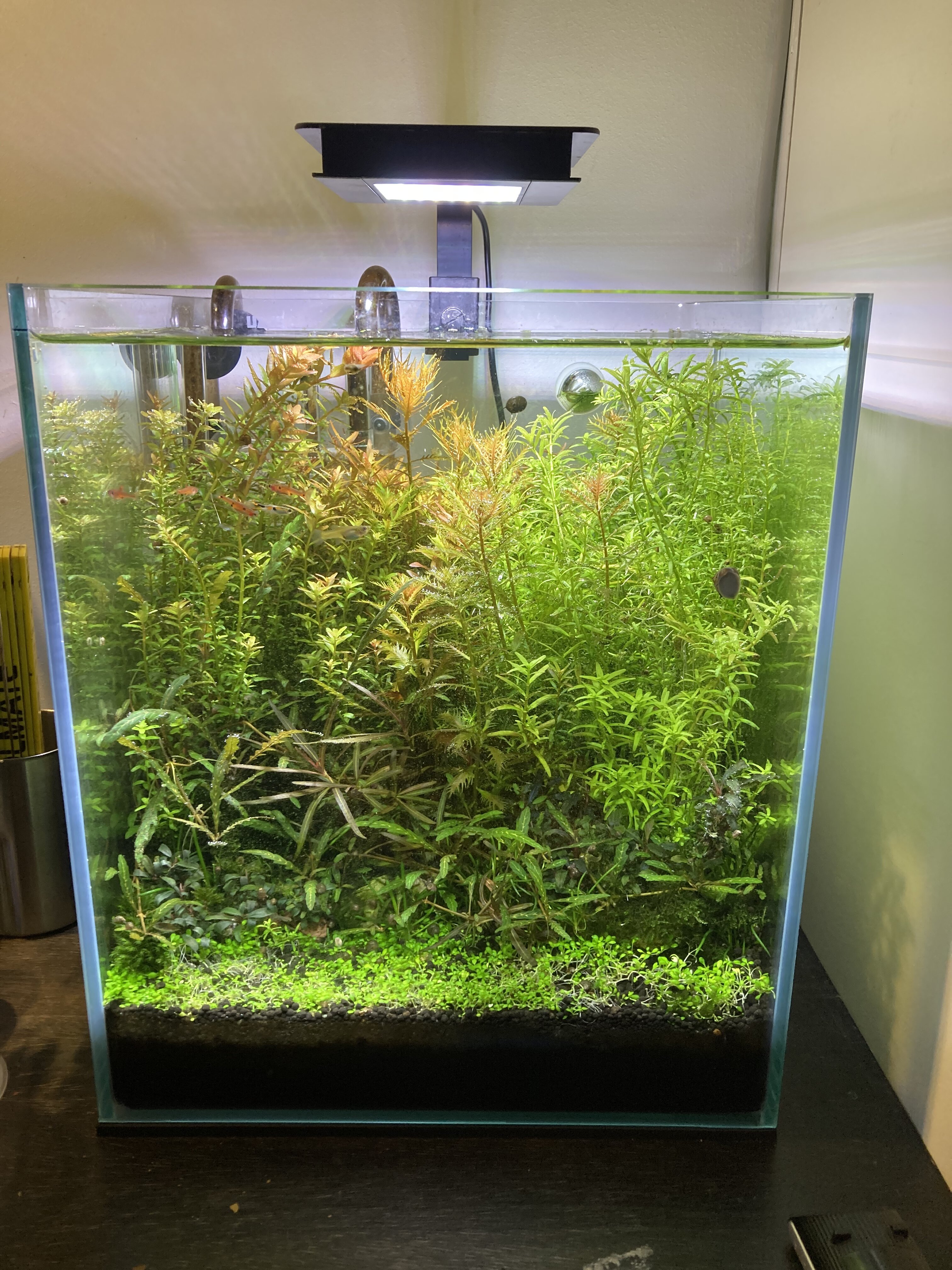 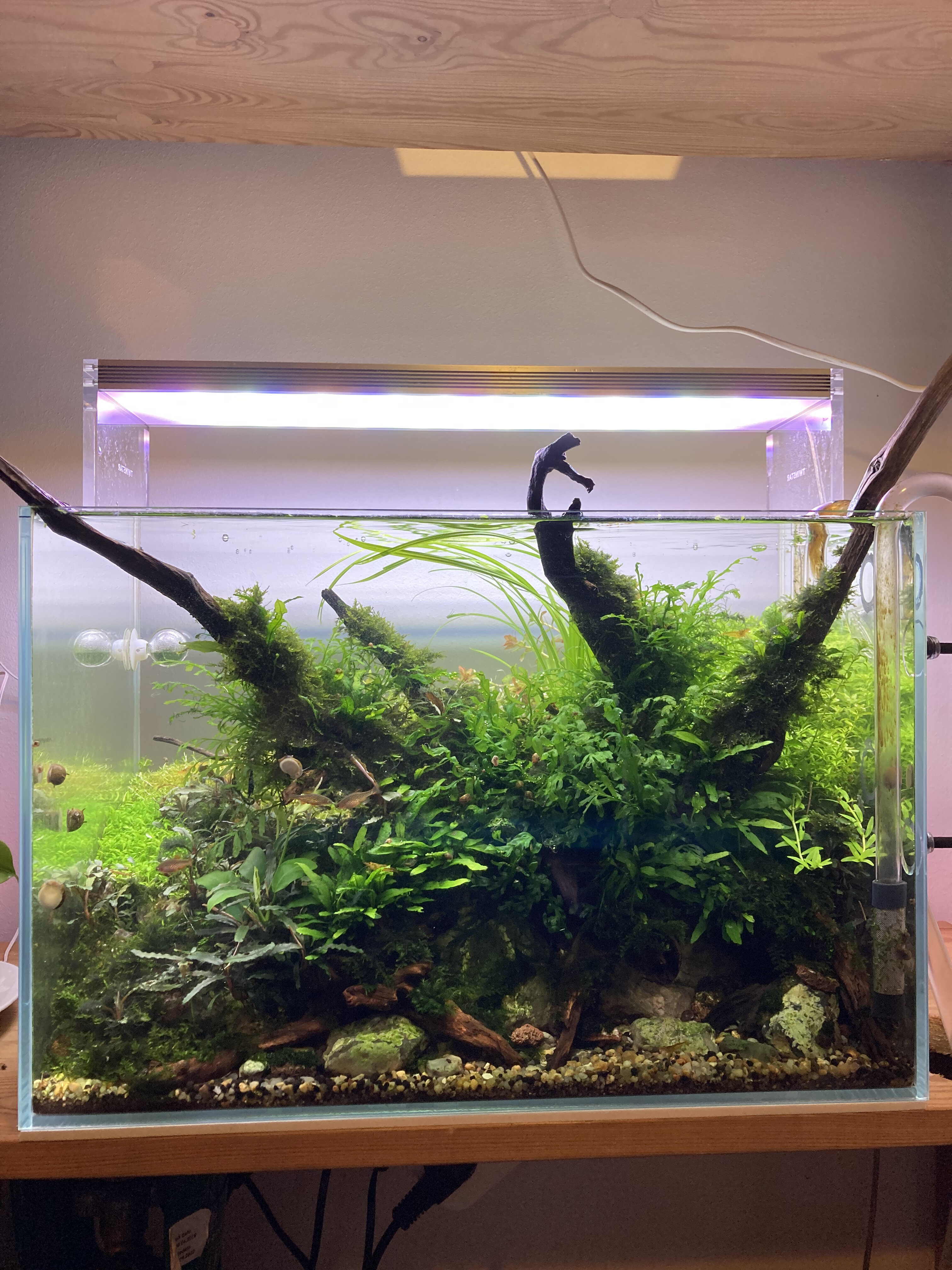 And the after to the before.

I trimmed back the fastest growing stems really really hard, removed some more c.helfri, pushed the orange juice stems around some and then called it good for the evening. Next week I will trim the rotala green down to the substrate and replant all the healthier new growth and thin the epiphytes. It’s easy to go too hard in a small tank and loose all the balance.
Don’t believe the hype.
You must log in or register to reply here.