I'm attempting to dry start fissidens fontanus and riccardia chamedryfolia driftwood. This setup has been going for about two weeks and I wanted to share the progress! I chose to do this because they were small amounts of leftover mosses, and the aquarium wouldn't be ready to set up for some months. I hoped this method would help the moss to propagate rapidly and make the aquarium instantly look more mature.

I initially attempted to use the yogurt method, cutting the pieces very small as I had no blender. Unfortunately, the mix was not thick enough and the yogurt was rinsed off within a couple of days. My next problem was that the wood had never been submerged and was dry. In the first few days, I sprayed the moss every hour, as the wood would absorb any of the water and dry out the moss too quickly. Eventually, I relented and added a pool of water at the base of the aquarium. This has helped with the humidity and now the wood is wet enough that I don't need to spray regularly. I highly recommend waterlogging your wood before a dry start.

As you can see, there is some significant mold (another reason that wood was a poor choice). The dead and browning moss is due to my attempt to kill the mold with flourish excel. This caused much more harm to the moss than the mold... I don't recommend this strategy. The riccardia is starting to show growth and some spreading over the wood which is great! The fissidens suffered the most from my glutaraldehyde attack but is looking like it will make a comeback. One thing that seems to have really spurred on the moss is an addition of ferts to the misting spray a couple of days ago. I assume without the yogurt base, the moss was feeling starved of nutrients.

The top is wrapped with cling film but over the past week, I've added more ventilation until it has become mostly hole. The moss stays moist due to the damp wood, and I am hoping lots of ventilation will control the mold. 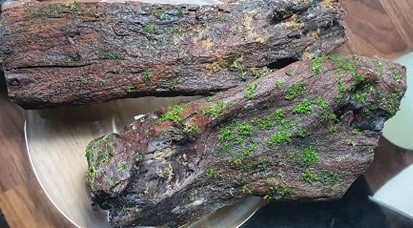 I sprayed my dry start moss with a dilute solution of TNC Complete, 3mls per litre. With the light on full for 12 hours a day, growth really took off.
.
Aquazeitgeist. YouTube
A Brief and Incomplete History of Aquascaping. Soil Substrate Planted Tank - A How to Guide
Schism Reimagined. NatureScape. Return of the Shallow. Windswept Eternity, Primordial. The Dark Side or What Lurks Beneath
B

As a quick update, I have now had the tank flooded for a week. There were some serious fungal issues throughout but it didn't seem to affect the growth of the mosses. The fissidens didn't really seem to recover from the death, but the wood does seem to have very small pieces very firmly attached. It might take months, but I'm sure there will be a lush growth of it. The Riccardia is beautiful. Certainly a highlight for me. Photos are hard to take due to it being in an 8 gallon 'fish bowl' but here you go:

The Fissidens wood, with very very small specs of hope for the future:

The beautiful growth of riccadia so far:

Full bowl, not yet grown in but I am optimistic:

That fissidens will for sure recover in no time at all now it's under water. It's extremely hardy but there is a bit of a misunderstanding about F. fontanus - it's a true aquatic and does not grow emersed anywhere other than constant splash zones from waterfalls where it's wet enough that it's basically submerged anyway. Other people will tell you this is incorrect but it's not a matter of opinion, they're simply wrong or have misidentified some other species of fissidens. High humidity is not sufficient for fontanus. It can survive emersed, it can survive total dessication and regrow, but it simply does not grow emersed. It is an obligate aquatic and for that reason doesn't lend itself particularly well to the dry start method. That's not to say that it won't work but any growth that results in it attaching to the wood is just the fissidens trying to survive in an alien environment and would occur much faster submerged. To the extent that it will survive emersed it's no different than the way in which most house plants wouldn't immediately die if you were to submerge them in a high tech aquarium and may even put out new growth before ultimately rotting away, one of the reasons F. fontanus in particular is quite prone to mold in dry start setups is that some of the fissidens begins to rot. Dry start method for works much better for other fissidens species.
The riccardia looks great though and the whole bowl will be very cool once it grows in. Careful adding shrimp too soon as bigger ones like Amanos can tear off a lot of the delicately attached growth from a dry start before it gets established.
The best way I've found to keep the wood and moss moist enough in a dry start like this is to keep the floor bare, add an inch or two of water and then run an ultrasonic fogger in it. Keeps the wood and moss saturated at all times if needed and you can add ferts to the water reservoir.
You must log in or register to reply here.
Similar threads