So having spent the best part of a year and a half contemplating this/ reading
endless journals I thought i’d start a journal for my first high tech planted tank
attempt ‘Lagoa Verde’. I’ll generally be testing the waters so to speak in terms of
the chosen plants, mostly easy with a few more ambitious species in-between, all
going well. I’ll eventually have some live stock in there but only once I gain
confidence with controlling the system.

The kit intended is as follows: 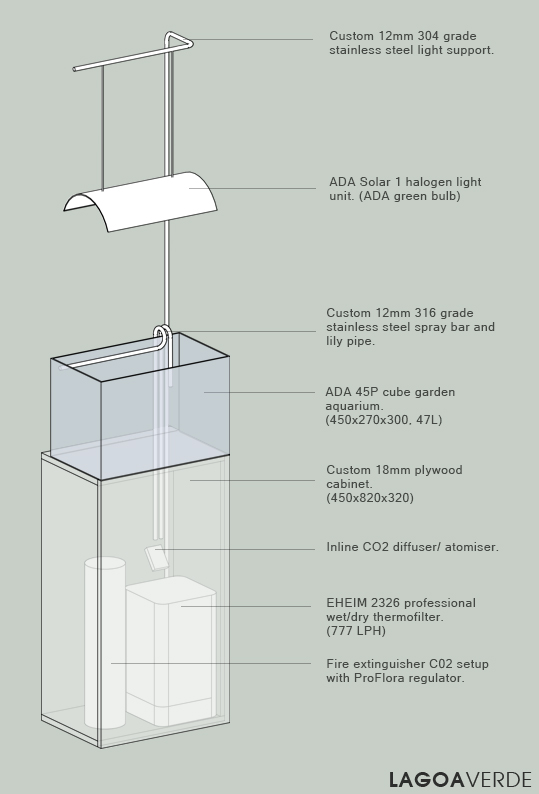 Having been dabbling with a low tech setup for the past few months and having
learned some lessons on the ‘dry start’ method I’ve decided to do the same here.
I’m still waiting on delivery of a few bits of kit/ hardscape so the dry start is probably
still a week of. In the meantime I’ve been cracking on with a couple of other bits on
my list. Firstly was the stand.

Tank Stand
So, I’m generally unimpressed with the quality of tank stands available out there.
I’m not keen on the thought of the warping that goes on with chip/ mdf board once
melamine covers have been penetrated by water. I opted to knock together a
plywood box, its pretty rough around the edges as its made from a piece of wood
some contractors left about after a job. However I quite like the contrast it has with
the craftsmanship of the ADA tank. Its redeeming quality is its soft close hinges.
These should help not to startle any fauna and give the thing a more ‘quality’ feel.
I’ve also gone on to give the wood two coats of yacht varnish. Some process
images: 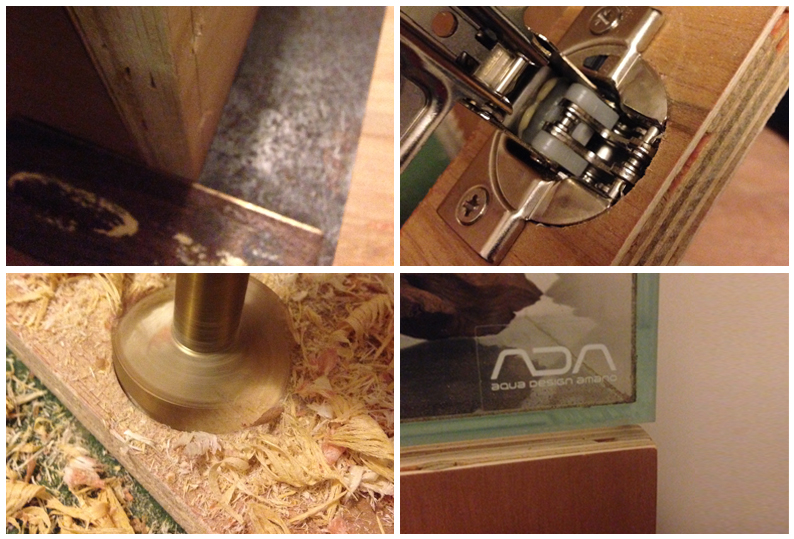 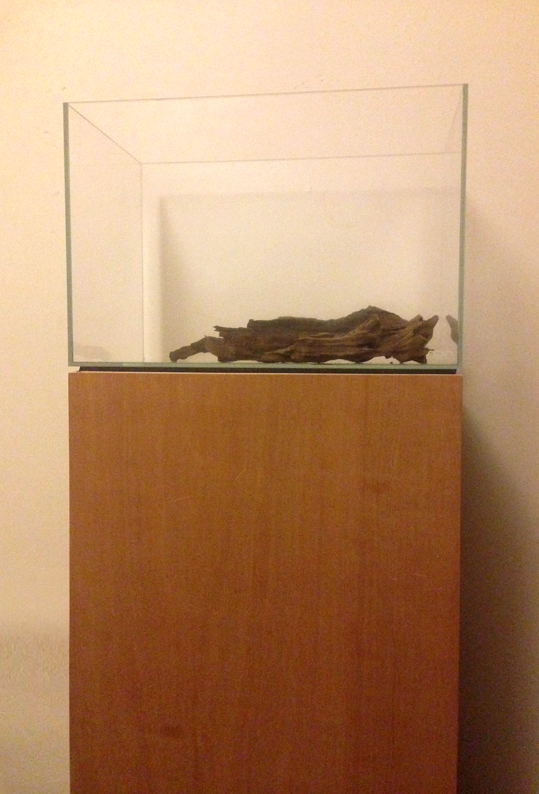 Lily pipes
The next bit I’ve been pretty excited about is the stainless steel lily pipes/ light
stand. The ADA stand was out of my price range, even before I stumped up for the
light unit itself! As you may note from the above diagram I’ve extended the stand
out at the rear by 5cm. This is so that I can drop the pipes through this and secure
them firmly inside the cabinet with no visible supports. The light stand will continue
to the base of the unit and will therefore also double up as a brace. I bough some
nice quality benders and ordered a sample of 12mm 316 grade stainless tubing.
The result was as follows: 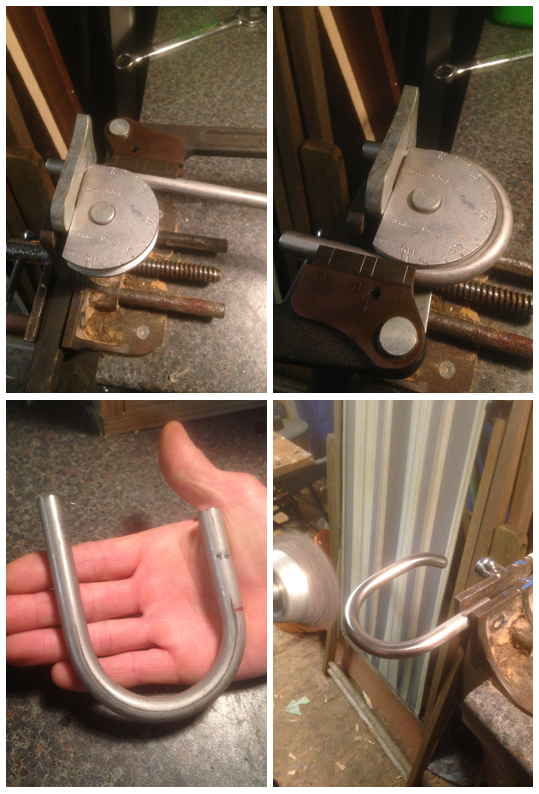 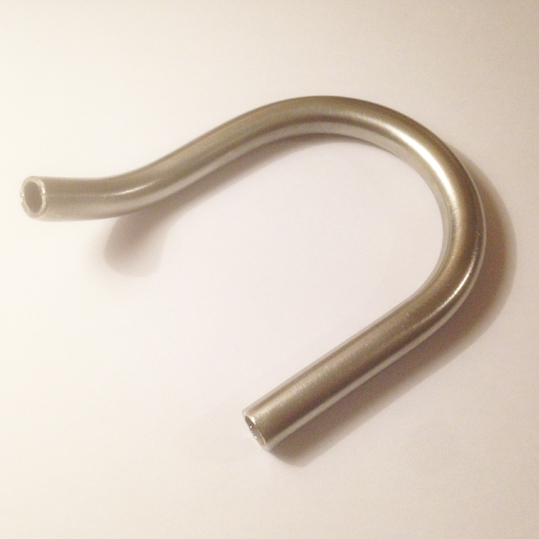 And thats it. Following the successful prototype i’ll be making the actual Lillys/
stand this weekend. I can then setup the light and begin with the aquascaping!
My concerns at this time are regarding the light and filter being too powerful. I’ve
designed the unit to be able to be raised to 80cm ish above the surface and have
also reduced the outflow pipe diameter on the filter. I’ll be over-drilling the spraybar
in an attempt to reduce the velocity at which the water enters the tank.

I’ll be back with updates as and when I have them, any advice welcome,

cabinet looks good. Do you intend to treat the end grain to stop water penetrating the laminates?
Love the pipe bending, you could go into full time production on here with that, I'm sure lots of people would like some.

cabinet looks good. Do you intend to treat the end grain to stop water penetrating the laminates?
Love the pipe bending, you could go into full time production on here with that, I'm sure lots of people would like some.

Sent from my Moto G (4) using Tapatalk
Click to expand...

Thanks Vanish. Yes the cabinets had a couple of coats of yacht varnish but its still slightly rough. I'm pretty sure it will hold out for 2-3 months though until I can use a nicer wood to the same design

So the lily pipes and light stand have been made, the lily pipes aren’t in situ yet,
these will be in place after the dry start. The light stand is working a treat though.
I’ve currently got the fixture about 40cm above the top level of the tank, where I’ll
leave it for the duration of the dry start. Afterwards I’m thinking of moving it up to
around 60-70cm depending on the photoperiod I opt for, TBC. 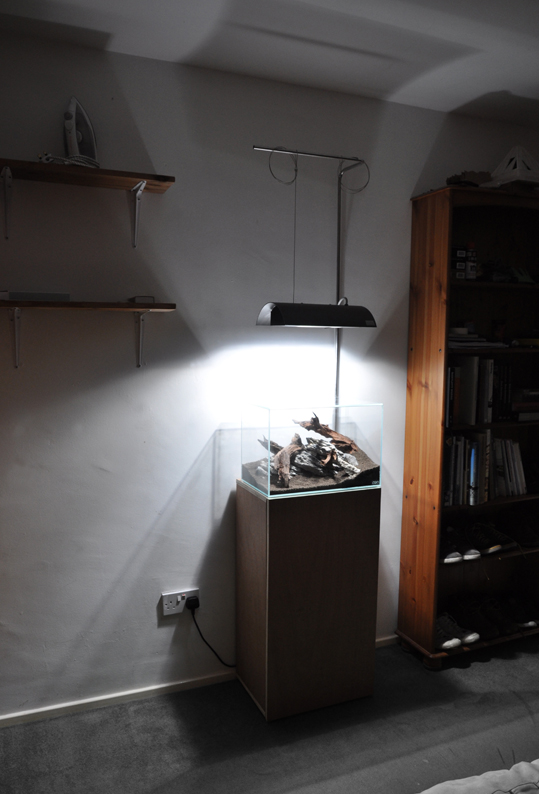 I managed to get a local glazier to cut me a piece of optiwhite 6mm toughened
glass so I’m all set to plant. I'm thinking of using a tiny circular rubber
'cushion domes' under each corner, similar to those you see behind kitchen
cupboard doors. Hopefully this will aid the gradual diffusion of fresh CO2 into the
tank whilst emersed. 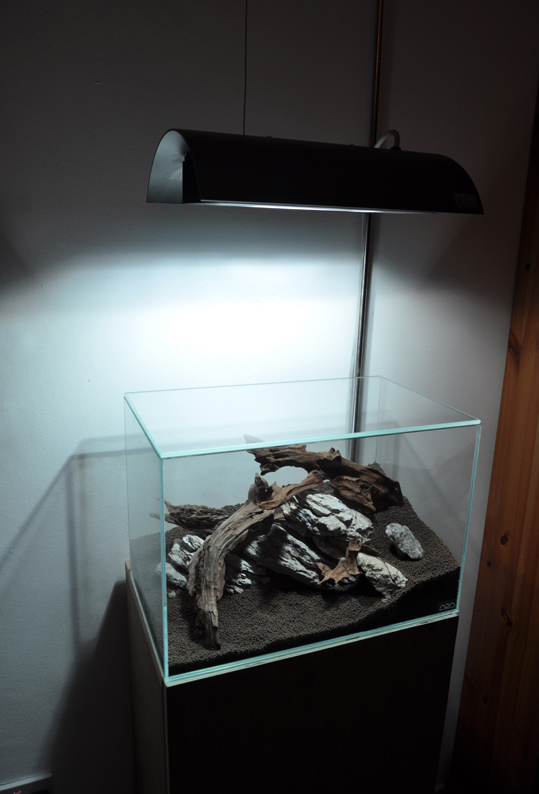 The layout that I’m currently thinking of going with is as follows. There's plenty of
open space around the back for stems, foreground for carpet and the wood is
orientated to expose its face more towards the front glass than up, hopefully
leading to some nice looking moss. I’m currently thinking 'Vesicular Montagnei'
(Christmas) and possibly 'Fissidens Fontanus'. 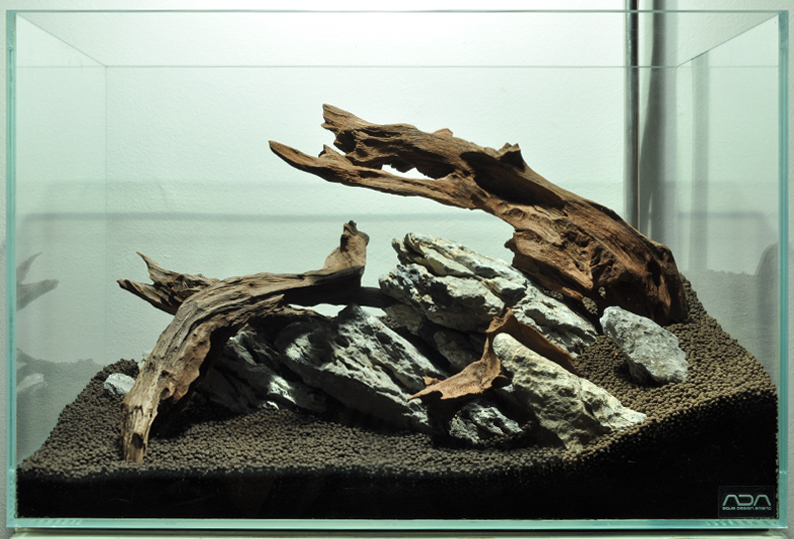 Also in the dry start I’ll also be adding some 'Helianthus callitrichoides' that I bought
4 weeks ago and have been bringing on in an incubator. The growth has been slightly
underwhelming and I attribute this to the fact that:
A) The incubator isn’t heated
B) The window sill the incubator is on is northern facing and its the wrong time of year.
C) I used TMC nutrasoil as substrate.
That said there has been some growth albeit a bit leggy. I initially just laid down the
strands on the substrate, I’m now considering whether to do the same in the aquaria
or actually plant the individual plant-lets? 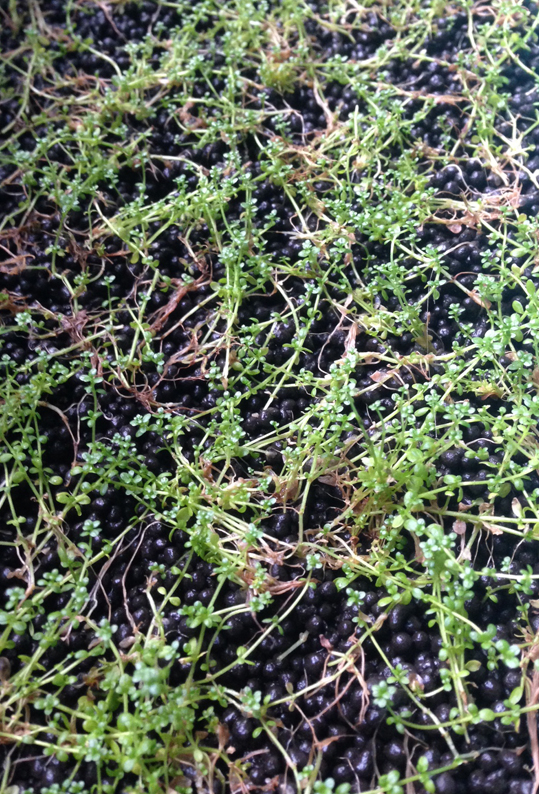 So I began the dry start. The chosen mosses were Taxiphyllum ‘Spiky’ and
Vesicularia ferriei 'Weeping’. I had more than enough in the end so had good
coverage. 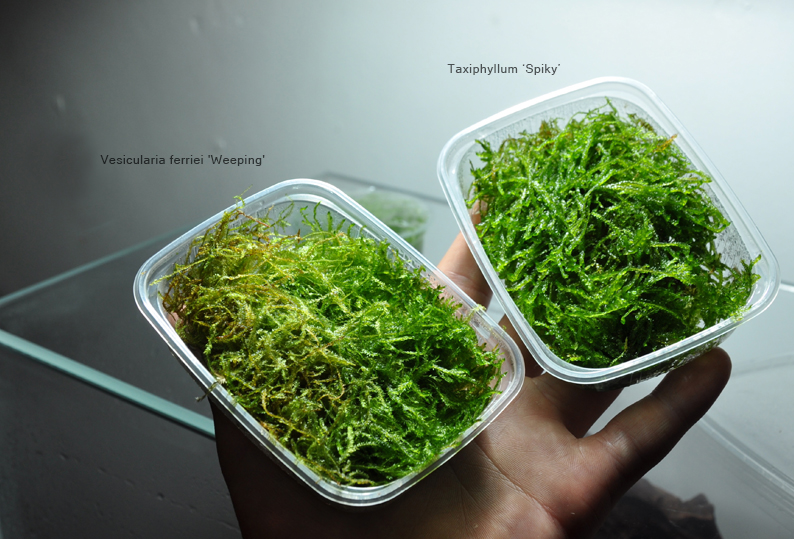 I began by saturating the wood in the tank and then chopped the moss into
4-5mm sections and spread them as thinly as possible so as to aid it in attaching. 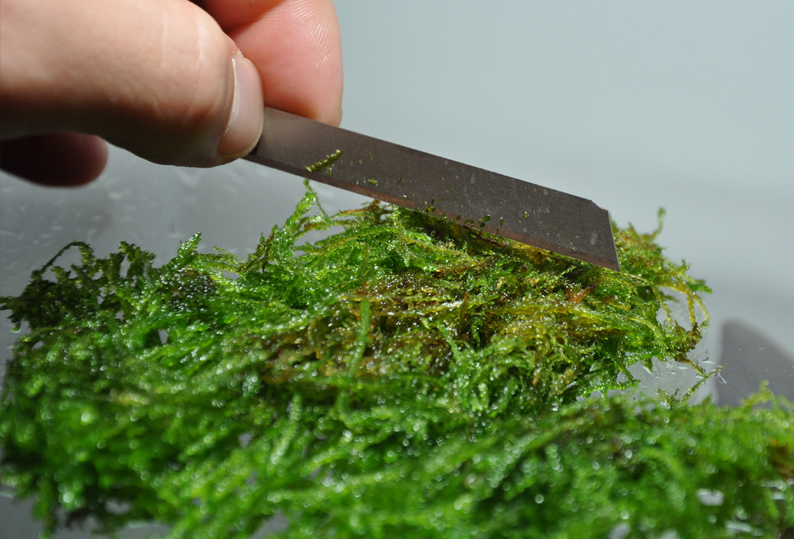 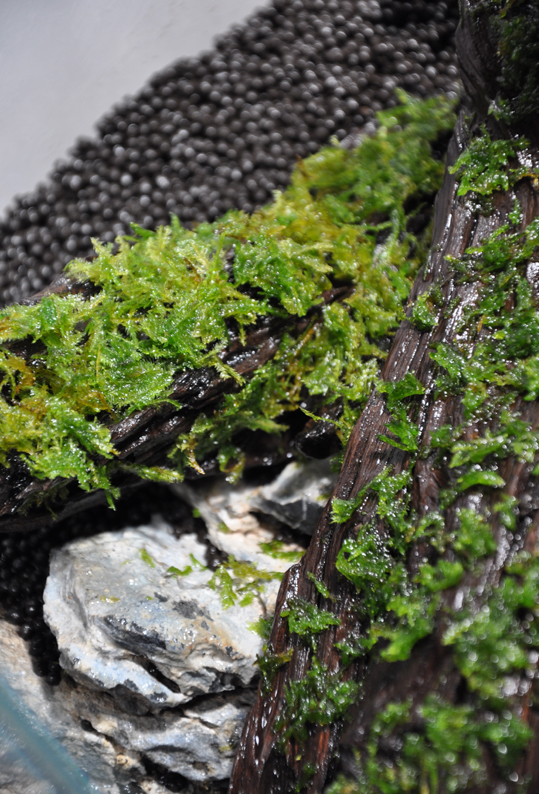 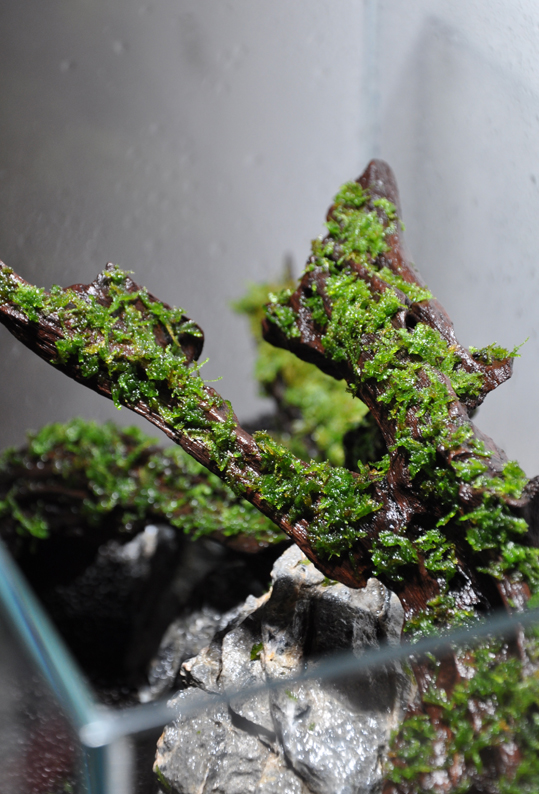 I’d originally intended to mix the mosses for a more ‘wild’ feel. However in the end
I intentionally split them onto separate bits of wood. I figured as I’ve never used
CO2 before nor either of these mosses it would be easier to ascertain their relative
success if separated. The tank is now ready for the addition of a couple of plant
species. 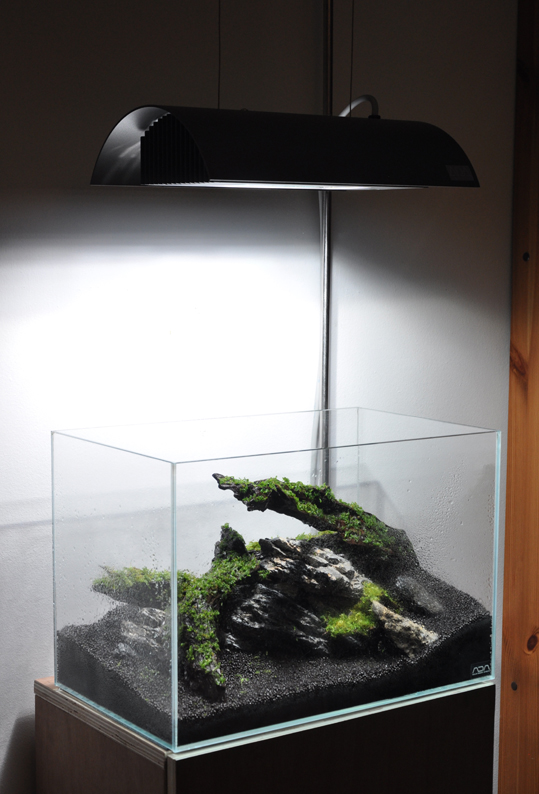 Mate your journal looks like the stuff of legend. You'll be able to make s book out of this.
The attention to details and will to go out of your way and explain every bit and bob going into this scape is amazing.
Also think your stainless lilly pipes could make you some money if you want it as there is increase demand for this stuff at affordable price.
Scape is looking sweet too.
Will come back for updates.

looking great...very nice set up and scape.
.
Aquazeitgeist. YouTube
A Brief and Incomplete History of Aquascaping. Soil Substrate Planted Tank - A How to Guide
Schism Reimagined. NatureScape. Return of the Shallow. Windswept Eternity, Primordial. The Dark Side or What Lurks Beneath
J

Love it, very minimalist and effective. I'm about the same stage of DSM as you, using fissidens and HC in a tiny 16l nano.

Cant wait to see this mature!

Thanks very much for the positive feedback guys, I can't wait to see it mature either!

So its coming up to two weeks since i began the dry start. The moss seems to
have been doing well overall. It hasn’t attached firmly to the wood yet however is
starting to orientate itself and sending out new shoots. Another couple of weeks
and I’m confident it will have attached and filled out sufficiently ready for the flood. 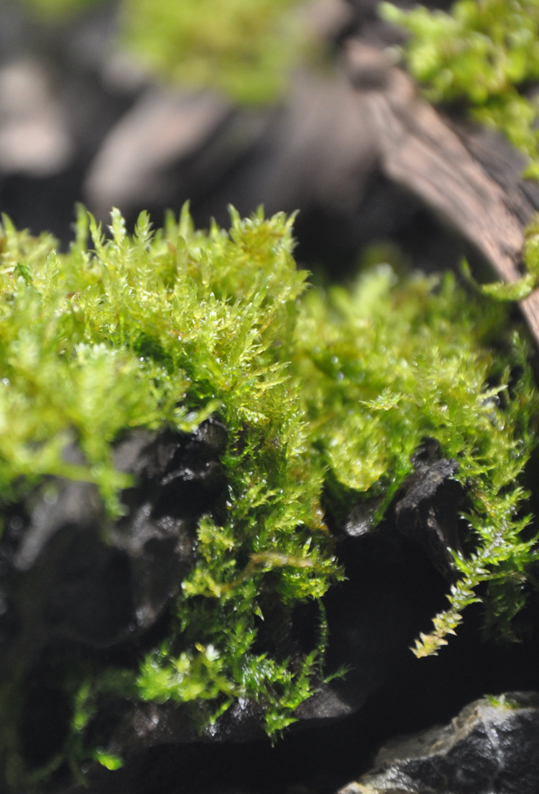 Just over a week ago I added the first plant species. ‘Eleocharis Acicularis ‘mini’
and the Helianthus Callitrichoides’ I had in the incubator. I was pretty impressed
with the amount of Eleocharis in the 1-2 pot. I got around 30 small clumps out of
it that have been planted at the front left and back right of the layout. 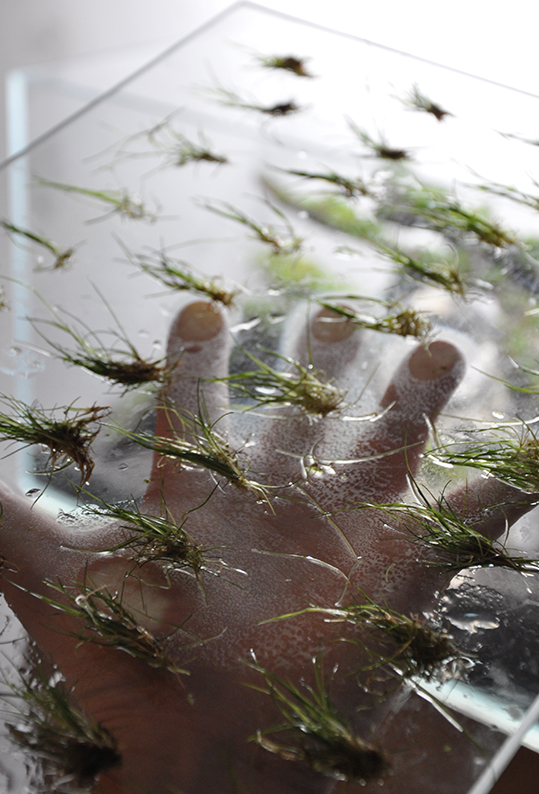 I’ve been happy with the new growth put out by the HC now that its under the ADA
light. There were a couple of apparent ‘melt’ spots appearing in the lawn so I removed
these with the tweezer so that surrounding runners could fill the space. 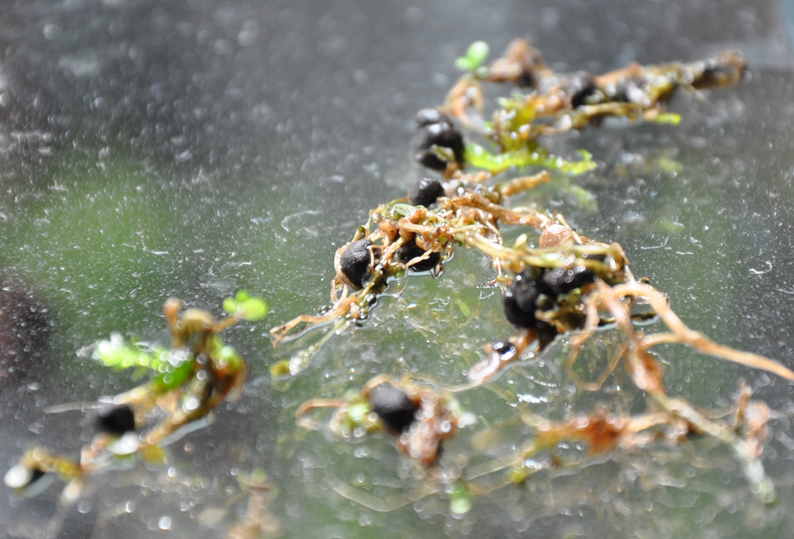 One of the reasons for my choosing of the HC was its really small leaf size.
I love the way that the best aquascapers use it to their advantage in smaller
aquariums to ‘trick’ the sense of scale. 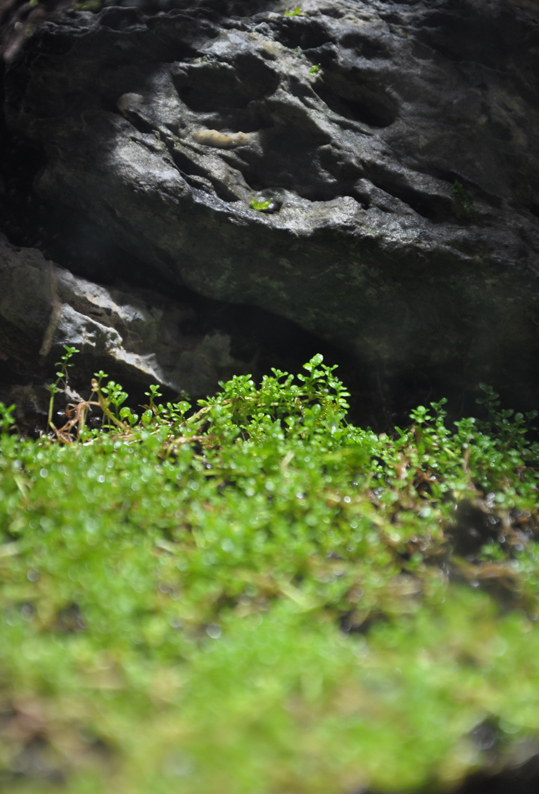 The mini hair grass seems to be rooting in the substrate no problem. It’s already
began to send out runners in other areas of the tank. 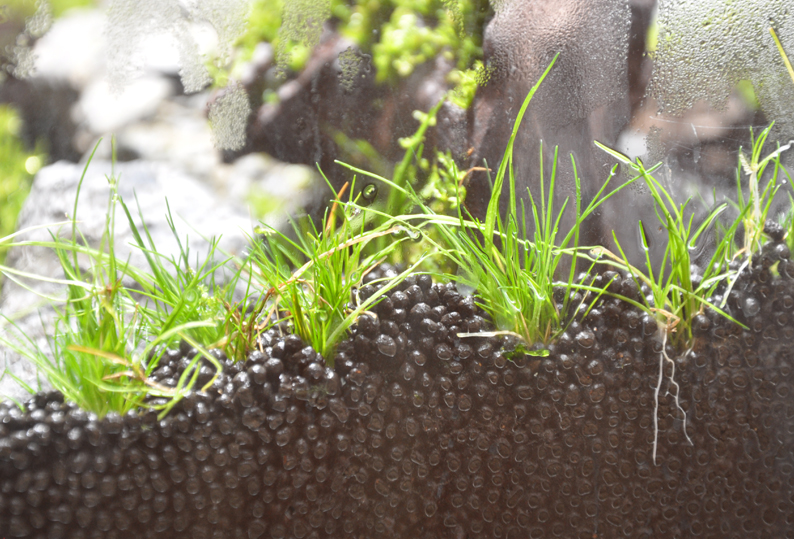 …and in other news my 316 stainless hose reducer arrived. Ooooh, shiny. 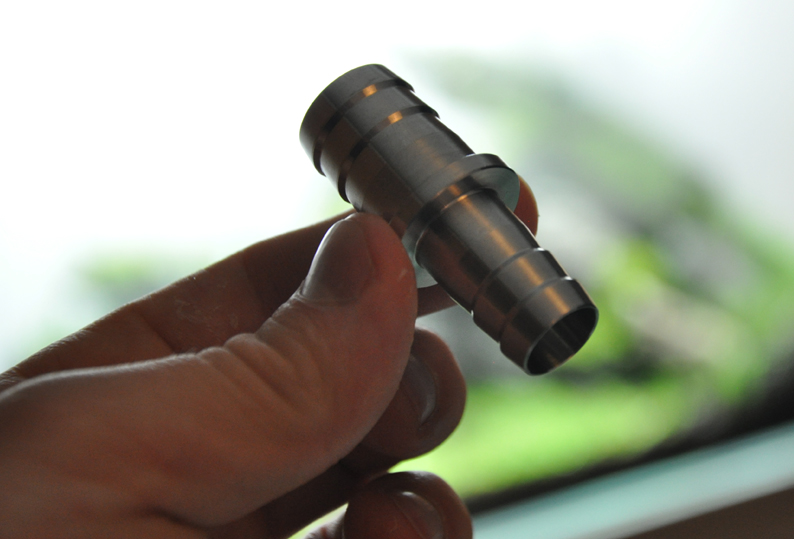 And so now its just a waiting game. Other than researching EI and Co2 my side project at the moment (after reading a
few inspirational threads on the Barr report) is to build my own custom regulator. There was a very interesting post by
Mr Barr on the benefits of running x2 solenoids/ diffusers on one tank, keep your eyes peeled for updates…

Love the way you have followed the rock strata when setting out your rock work .Nice DW too

Can you point me towards the thread that talks about dual solenoid and diffusers?
From Sydney , Australia

Super! Love what you have created

I'm running x2 co2 setups on my 4ft atm. Mainly because I have another tank/co2 set up that's empty. So may as well use it. One goes into a reactor and the other goes to an in-tank diffuser under an outlet. I'm doing it, but I don't know what the benefits are (if any). What does Mr Barr say on the topic?

This is a really beautiful setup, congrats!

rebel said:
Can you point me towards the thread that talks about dual solenoid and diffusers?
Click to expand...

Hi Rebel, this is the thread I read the comment on (you'll have to scroll a bit):
http://www.barrreport.com/forum/bar...16-l-stainless-steel-double-stage-dual-output


Dantrasy said:
I'm running x2 co2 setups on my 4ft atm. Mainly because I have another tank/co2 set up that's empty. So may as well use it. One goes into a reactor and the other goes to an in-tank diffuser under an outlet. I'm doing it, but I don't know what the benefits are (if any). What does Mr Barr say on the topic?
Click to expand...

Hi Dantrasy,
Have a look over the above thread. My understanding is that setting the regulators to differing bubble counts means you can effectively begin to gain more control over the PH of the aquarium throughout different phases of the CO2 cycle.I may be wrong, anyhow I've decided to stick with just one reg for now. I think its an extra level of difficulty I could do without on my first high tech

MrHidley said:
This is a really beautiful setup, congrats!
Click to expand...

What was I supposed to do? It didn't match my hose reducer! 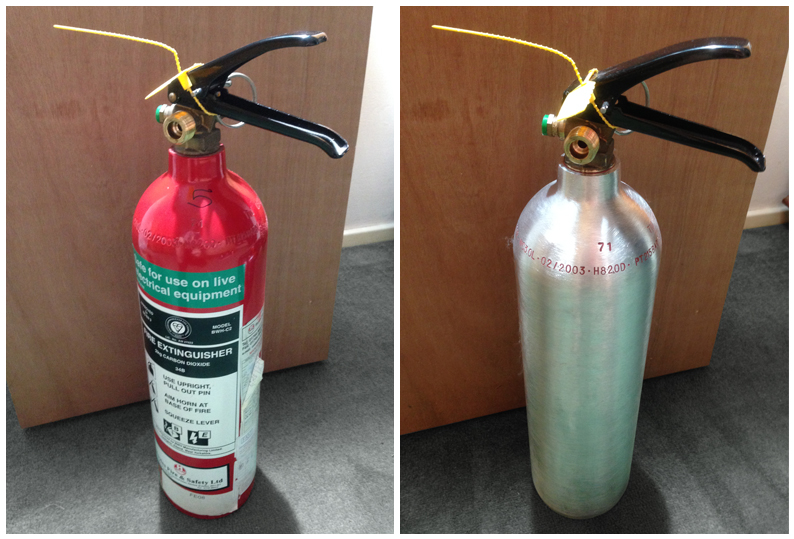