Is expensive bio media worth it?

bazz said:
Then, our Buce, Anubias and Ferns can be classed as all three?
Click to expand...

The terms are mutually inclusive, so you might have an individual or a community that for example is both a rheophyte and a lithophyte, depending on where it is described growing. You can then alter the term to both rheophytic and lithophytic if it has a tendency to prefer growing in those locations. If you had a rheophytic community including equal numbers of lithophytes, saprophytes and hygrophytes (damp-soil plants) from the same species, then describing it would take longer. In those circumstances it is reasonable to choose whatever term you prefer because there is equal prevalence. Where a significantly higher populations of the same species are found in locations different to the term assigned, then this can be viewed to some extent as unambiguous and misleading, so it helps to have a balanced view based upon observations. These terms are more applicable to describing the natural environment. To qualify that the location was not representative of the community observed then you would have to alter the terms again using an adjective, but this is unusual and you would end up with terms like macrophytical (particular to plants that like to grow large). You could also alter terms to qualify that the location where the plant grew had a distinct function using an adverb, and it is from this we get terms like saprophytically (events particular to plants that like growing on dead wood), but in those cases you would still have to link the adverb to a verb, so you might end up with hyphenated terms like saprophytically-grown. The term describing the most prevalent location for all three plants that you listed would be something like rheophytes (plants that live in fast moving water) or hydrophytes (plants that adapt to living under water). A better way to classify them is to use the term to qualify how they adapt to the conditions. Obviously, if they have a rhizome and attach to a solid surface to anchor then they would be rhizomal rheophytes. How about hydrophytic rhizomal rheophytes. It would seem that the rh-sound is less favourable in modern English and it has been dying out for quite some time and it is things like this that mean people have a preference for easy pronunciations. Hopefully my thoughts here are not too incorrect or annoying.
- moderators please feel free to move this conversation to the relevant thread if we have one, or you can find it. Sorry everyone else

Simon Cole said:
a community that for example is both a rheophyte and a lithophyte
Click to expand...

I think this is an example of that, <"Bolbitis heudelotii in the wild">. 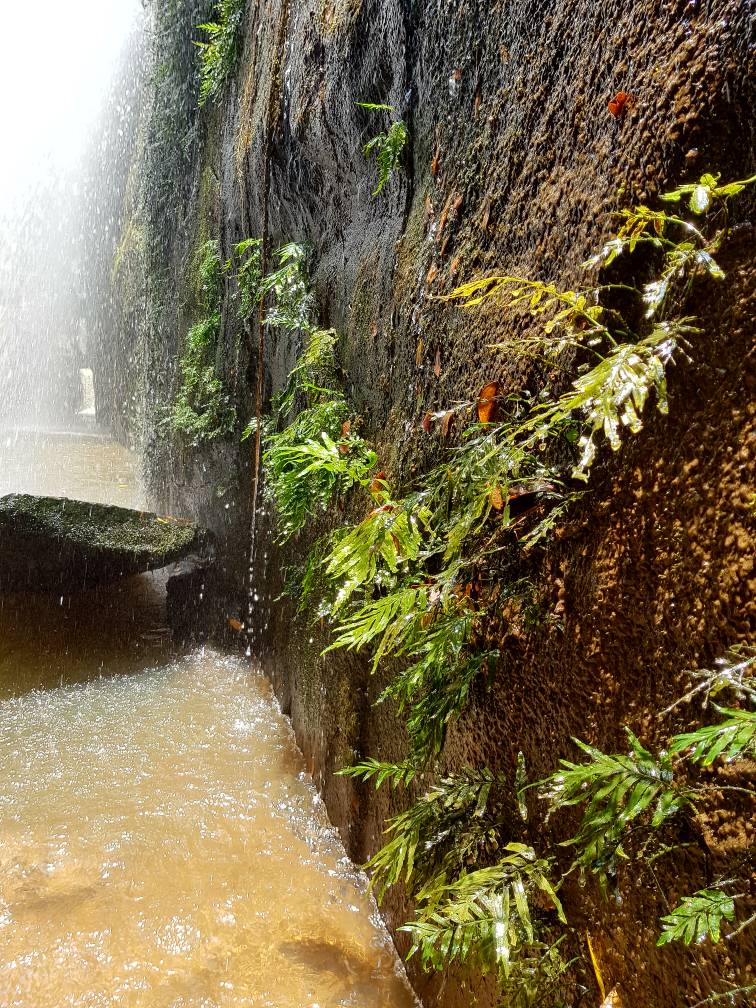 That is what I actually love about the German language and the way they try not to complicate things by giving it a neutral name that doesn't confuse things... And they come up with the most beautiful names and rarely use any loanwords... Why should you if you can create your own and keep it simple?.

They simply name the entire group (epiphytes etc.) regardless of what it grows to "Aufsitzerplanzen" which is literally translated as "On sitting plants" this eliminates all confusion about what is what when it sits on this or that. Whatever it is, it's sitting on it...
Last edited: 3 May 2022
Cheers,
Marcel..
Tanks for watching.

sparkyweasel said:
This is complicated by so many aquarists insisting on calling their Anubias, Microsorum etc 'epiphytes' when they are lithophytes.
Click to expand...

It's good that you have mentioned this. During the time that I've been a UKAPS member, others with far more knowledge of aquatic plants than I have (not difficult!) have often referred to Anubias, Microsorum, etc. as epiphytes. I've never had any reason to question that terminology. So, a big 'thank you' from me!

Simon Cole said:
Saprophytes do not need to saprotrophs
Click to expand...

Thanks, I wasn't aware of that.
M

sparkyweasel said:
This is complicated by so many aquarists insisting on calling their Anubias, Microsorum etc 'epiphytes' when they are lithophytes.
Click to expand...

Britiannica defines epiphyte ... any plant that grows upon another plant or object merely for physical support.
Wikipedia: Lithophytes are plants that grow in or on rocks.

Litho - new latin for rock or stone... phytes - Latin for plant.... or Rockplant... Which seems like quite a narrow definition to me.

What am I missing here? Let me know if I have to go stand in a corner for 15 minutes.

MichaelJ said:
What am I missing here?
Click to expand...

just the word most

"A plant growing on another, but not parasitic" OED

"a plant that grows on another plant but does not feed from it, for example, some mosses" Cambridge Dictionary; Epiphyte

"Obligate epiphyte
Plant that always grows on another plant for structural support, but derives no nutrients from the host." Encyclopedia of Biodiversity Enc BioD

"A plant that grows on another plant but is not a parasite and produces its own food by photosynthesis, as certain orchids, mosses, and lichens" Webster's New World College Dictionary, - for the Americans Although they also give; "A plant parasitic on the external surface of an animal body."

"A plant, such as a tropical orchid or a staghorn fern, that grows on another plant upon which it depends for mechanical support but not for nutrients." American Heritage Dictionary.

"Plant attached to another plant, not growing parasitically upon it but merely using it for support" Penguin Dictionary of Biology.

@sparkyweasel - here is my best guess:

The Oxford Dictionary of Botany definition of epiphyte:
‘A plant which uses another plant, typically a tree, for its physical support, but which does not draw nourishment from it’

Arguably, the foremost peer-reviewed classification system of a plant community of epiphytes in the UK appears to be provided by the Royal Botanic Garden Edinburg, in their Scottish classification. This is possibly the most commonly accepted definition in the UK as a whole, due to the number of authors that did the peer review and to some extent the prestige of the institution, which was chartered by royal warrant in 1699 and retains this assent today; but also the fact that there are no alternatives. They chose to recognise the Oxford Dictionary of Botany definition that I have quoted above and reinforce this with a statement on page 1. But that document is not designated for geographic locations outside Scotland, where other definitions might still apply. Saying that, I think the audience needs to understand the meaning more than it needs to represent something convenient and arbitrary.

Dictionaries are just records of what people dictate most commonly within a human population, as opposed to classification guidelines that are aimed at refining these terms. Scientific journals or authorship groups may indeed have academic prowess, but it is hard to argue where they have agreed a definition through a plant classification scheme unless there is a poll. There may well be other definitions of epiphyte that apply in different jurisdictions or to different communities of experts that are more binding. The closest I can see one could come to international agreement of what an epiphyte means would be through an intergovernmental organisation like UNESCO. However, the UNESCO Classification of Vegetation does not really apply to plant communities; it applies to plant formations, and in any event it does not define an epiphyte. It would seem that an internationally-agreed classification scheme for plant communities has not been clearly defined by UNESCO, and that implies that national plant community classification schemes could take precedence until one is developed, agreed and implemented. Moreover, definitions of epiphytes and other 'phytes' are different depending upon whether you are a microbiologist or a ecologist. But if you are talking in the context of plants, the definitions like this one (borrowed from a book) probably do not apply easily; they are also very poor use of Greek/Latin; but then, how can you publish research if your academic community is using a different word. I guess you need to take a balanced approach as to what definition you prefer to use. However, for most ecologists there is only one meaning for an epiphyte and that is noted above.
M

“I learned very early the difference between knowing the name of something and knowing something. I think it's much more interesting to live not knowing than to have answers which might be wrong."
- Richard P. Feynman

Sorry for being very, very off topic.

Simon Cole said:
There may well be other definitions of epiphyte that apply in different jurisdictions or to different communities of experts that are more binding.
Click to expand...

Taking some etymology into regard... From the Greek Epi = On (top/to etc.) and Phyton = Plant (algae, mosses and lichens included). The biological scientific definition is a non-parasitic plant that lives on another living plant. for short "On Plant"

So as a Lithobiotic subspecies the Anubias is most commonly found growing on rocks officially is Epilithopyte.

Confusing is that lots if not most of the Phytobiotic and Lithobiotic species don't discriminate you can find them on whatever as long as it provides support. Soil, sand, wood and can even grow to metal surfaces actually anything, hence we find them on the glass... Gyallíphyte? 🤢🥴

Metalophytes do actually exist, but they are not a group growing on metal surfaces but a plant that can tolerate ☠️ high levels of heavy metals such as lead.

I guess somewhere in history, especially in the trade they were done explaining and said lets cut the crap it's an "On Plant" and be done with it... And from then on a plant that grows on to something whatever it is known popularly as an Epiphyte or Air plant. And so another official synonym was born. That's another scientific definition, linguistics...

any plant that grows upon another plant or object merely for physical support.
Click to expand...

jaypeecee said:
And build-up of nitrate in the water column (along with phosphate and iron) must surely encourage algae and/or cyanobacteria growth.
Click to expand...

I have now learned that the result of combining these three nutrients will be determined by their relative proportions.

JPC
You must log in or register to reply here.

Thoughts on this Bio Media article?