The photo shoot went well. I was hoping to use a full-frame DSLR but had to use my trusted old 50D in the end. The practice shoot I did a few weeks ago really helped as I knew exactly what lighting would work, and I managed to improve the background this time.

The fish took a bit longer to get into the shot how I wanted. I ended up using a blue fish net taped to a broom handle to get them to shoal. Simply waving the broom at either end of the tank coaxes them into nice nice shoals and after a while you get used to their swimming pattern so can get the right shot after a few attempts.

I set up the hairdryer on a second tripod for the ripples that left me free to concentrate on capturing the shot at the right moment.

I ensured there was virtually no CO2 in the tank by doing a 75% water change last night, then running the lily pipe above the water line to drive of any remaining CO2 overnight. This helped to minimise pearling that would have been a nightmare and spoiled the photo with all that light above the tank this morning. (96w HO T5, 85w LED!)

Anyway, I'm pleased with the final shot. It's probably the best full-tank shot I've ever taken from a technical perspective, and I think the aquascape is also one of my best. It's certainly been my favourite in terms of trying out some new ideas such as the moss/blender technique. I'm also thrilled with how the Eleocharis mini and HC carpet mixture has worked out. I've learnt a lot about stem plants too.

I don't know what to say again about this tank !! FANTASTIC !!
The quality and details of these pic is very good

which camera and mens did you use for these picture.

aaaaaaah it will be long until we see the IAPLC shot


Ady34 said:
.cant help feeling that the stems could do with just a little more growth, do you not fancy taking it right to the wire and doing a truly last minute shoot and entry?
Click to expand...

I'd love to mate but my marriage is more important!

I've obsessed about this tank over the last 10 days or so, and promised today was the last... I'll keep it ticking over for the sake of plant health but I'm not planning on getting out the photo gear and tools again for a good while!

So, here are probably the last two photos you'll see of this tank for a while. 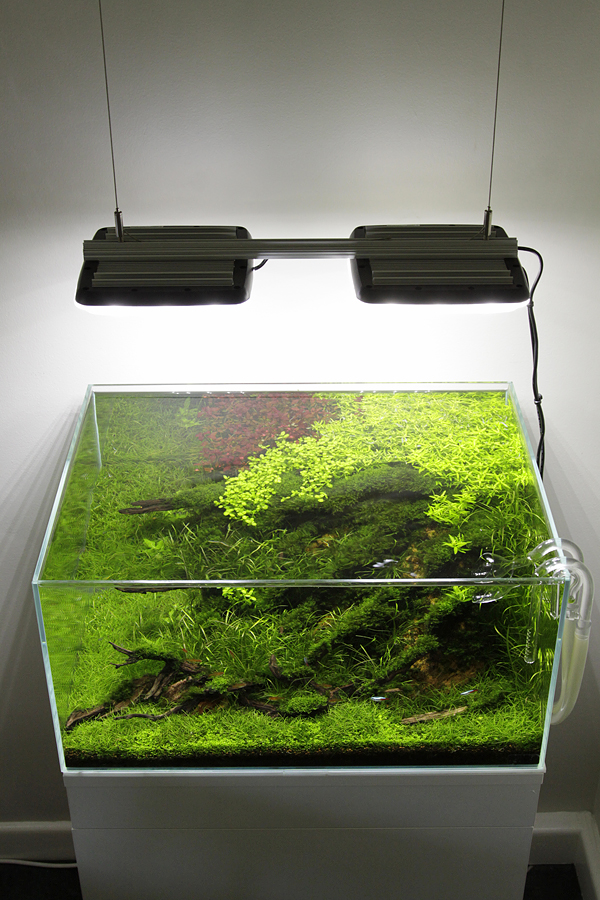 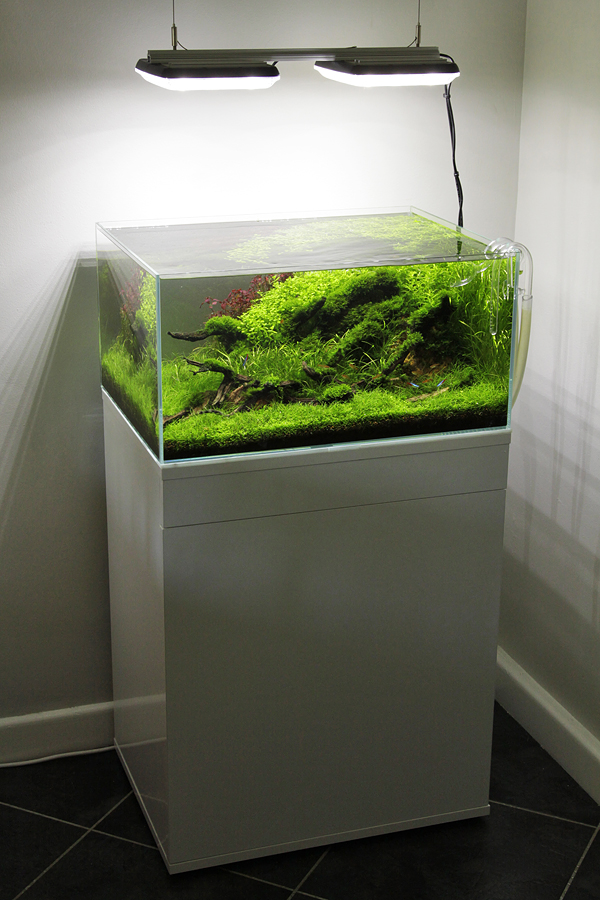 Finally - thanks so much for all the support and feedback you guys have provided throughout this journal.

It really has helped keep me motivated and no doubt has contributed to the way this aquascape has turned out. Hopefully my next journal can be as equally involving.

Superb scape, so healthy and natural, it will be a crime if this doesn't place well IMO. Inspirational journal and photography too shame to see it end. Absolutely awesome

I absolutely love this tank. Ive saved most of your pictures so I can keep them as reference. Theres so much going on in what is quite a small space its really inspirational for a newbie like me. Ive gained so much from just looking at the pictures I especially like how your carpet plants blend into the wood with a 2 different palants merging together and the other thing I like is how your main planted area is to the right of the tank where so many others are from the left.

Best of luck you deserve a high placing for this one

The red ludwigia made the color scheme much better. Easier to deal with, then the green stems did their job creeping over the wood nicely.
Lots of water changes, super cleaning everything and then the pictures are another level of horse manure to deal with.

It's a lot of work frankly.

plantbrain said:
It's a lot of work frankly.
Click to expand...

A labour of love!
www.georgefarmerstudios.com

Great one George! Congratulation on this journey. I do enjoyed a lot following the progress from the idea to the final shot.

I know this is IAPLC time but hoping you also will drop this to AGA this year.
This is not about guaranteed ranking and criminals if the tank is not getting very high, but this has good chances to do well as the scape itself is something new, the photo is awesome and the plant health is exceptional. If the fishes will be a nice touch it has great chances. But this is a small tank and IAPLC winners are usually larger ones. Thats why it worth to drop it to AGA too where the categorization support better these kind of beauties too.

We learned a lot from this journal, and i guess you also enjoyed at least creating this beauty. Does not matter what ranking it gets this year, but we will remember for this.

Then why race on contests? George journal shows exactly why it is good. The pressure of the deadline, the last few touches to make it even better. The photo test do perform a perfect photo. Without contests i guess that excitement is fully lost and we would miss it from the journal.

A great journal that has resulted in a stunning scape. The bad part is that we never get to see the final FTS untill judging is done, bit I bet it is worth the wait.

Good luck on the contest, the judges should have no other option than to score it well.
Only dead fish go with the flow.

It is an amazing scape... also great explanations of how you got to achieve it, from day one.

Could you do a 5 minute video of it, and release it once the results are announced? It would be really good to see the tank in movement.

George Farmer said:
A labour of love!
Click to expand...

Now try to do this on 5-6 aquariums various sizes.

Then the work is much more

Victor makes some good points, while seeking so fully bloomed design is a good reason to enter contest, same can be said for a dozen contest. The part about the SIZE of the aquarium is also true, I've heard this from no less than 4 different ADA vendors.

So when are you getting that 180 cm rimless tank?
The AGA and the ADA contest are linked I believe.

So if you enter the AGA, they automatically enter into the ADA.
The competition is quite good in the AGA contest.

You're right, of course. But I'm far too busy with work and family commitments to take anymore aquatic stuff on at home. This 60cm is the perfect size for me. Quality over quantity maybe.
www.georgefarmerstudios.com

George Farmer said:
You're right, of course. But I'm far too busy with work and family commitments to take anymore aquatic stuff on at home. This 60cm is the perfect size for me. Quality over quantity maybe.
Click to expand...

So true. But on another hand whole UK is secretly waiting until GF goes HUGE. With your attention and dedication to details a tank of any size has no chance to be less of a stunner. Same goes to getting 6D and into the videos. I can bet an arm (not the plant cutting one though ) we are going to see some of the finest video projects some time soon... It is very addictive.
Good luck to rank high.
To many to count...

Well the scape is still going! I've been too busy at work to strip it down and I'm away all this weekend. Then I'm away from home for 4 weeks after that.

So I think I'm going to try and keep it going for the next month or so using lower lighting and nutrient levels, and just maintaining it once a week when I'm home at the weekends.

This gives me plenty of time to plan the next 'scape! Any suggestions welcomed!

Thanks again for all of the feedback - it's really appreciated, as always. 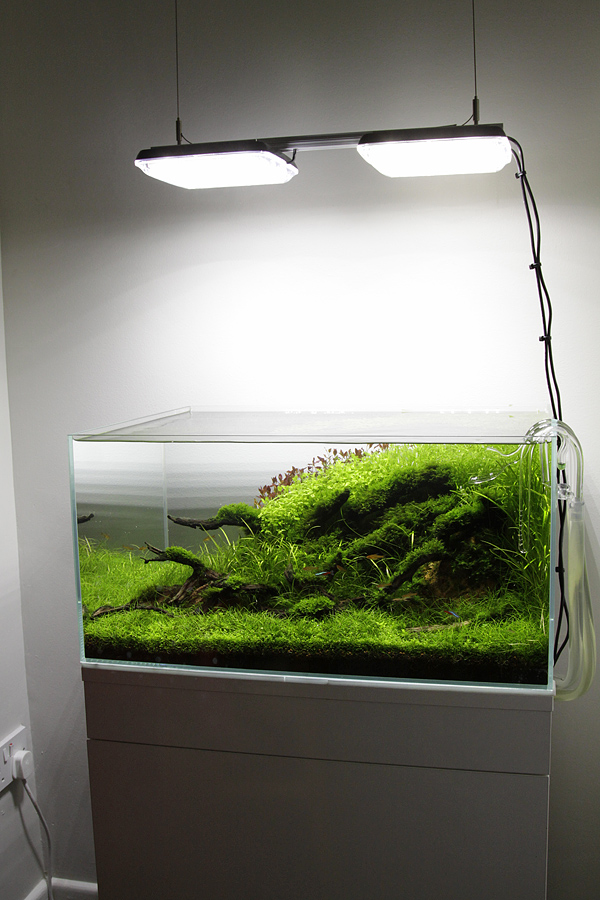 How's about a slow going iwagumi with anubias, ferns and a moss foreground! A tricky concept to pull off maybe and therefore a bit if a challenge but easier maintenance for family life. With a slow one the Mrs may even allow the monster tank Ed talked of above after

The tank looks perfect in the last shot. I think maybe some of the angles of the snippets of the iaplc shoot were deceptive as to the impact of the stems. When you look at those taken from higher angles the stem presence is highlighted.
Good luck mate, deserves a good placing. It looks much more natural than many in the top 100 will I'm sure.
Cheerio
Ady
Re-education Journal.
NAtural Jurassic Journal.
Dragons Crypt Journal.
Sticks and Stones Journal.
Dusting off the old Fluval Studio 900 Journal.
Aquanano 40 CRShrimp tank Journal

Looks awesome George, IMO it's just a shame the fake landscapes always tank over in the top 10. Lets hope the uk represent well this year, from what I have seen I think this will be our strongest year in the iaplc.
life is like a pot of HC

Here's a quick idea for an easy 'scape...

Strip out the plants but keep the moss-covered hardscape.

Replace the soil with a nice sand.

Drop the lighting to keep it low maintenance and help prevent algae. Maybe add some floaters.

And we have a nice minimalist Nature Aquarium.

I'll probably get bored of it after a few weeks but it should look pretty cool for relatively little effort/cost.

A large group of Pygmy Corydoras will look amazing. Unlike most Corydoras the Pygmy variant will constantly school mid water as well as bottom so that will look relatively nice. Here is a lovely video that I found which shows what i mean .
Not the best looking aquariums as I'm still a novice in keeping aquatic plants but I hope yous can follow my progress,
cheers,
Michael.
Low Tech 30L Betta aquarium
Low Tech 30L Shrimp aquarium
Orchids

A shallow Dutch,then you & Ian can have a 'scape off'

stu_ said:
A shallow Dutch,then you & Ian can have a 'scape off'
Click to expand...

Good idea but I'm not a big fan of Dutch these days. I've tried it and enjoyed the challenge but the style is just a bit too formal for my taste.