. . . once you've paid the cashier, just take them out of the packet, pull them over your head and ask the cashier; " Can you just give me directions to the bank?"

I hear that nothing brings guys to a journal quicker than a question about buying pantyhose...

I decided I couldn't be bothered with the tights. So a layer of filter foam in the bottom, then some cleaned smooth gravel filled to level with the base, and then the remains of a bag of tropica soil thrown in. 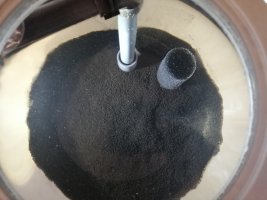 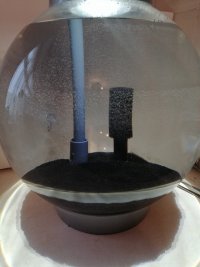 In fairness, it looks like I could add more, if I had some more. 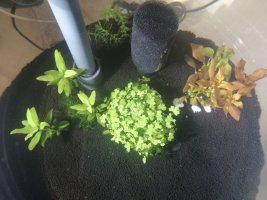 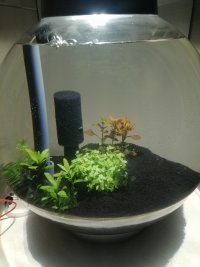 I put 4 root tabs in, why oh why do they insist on liberating themselves??? And splashed a dose of micro in there too.

I need to up the light at some point, however I think a lounge refit may come first to find a spot for the globe
Last edited: 16 Dec 2020
Ramblings Journal
Flat Earth Society

Looks great! Have you found trouble putting plants in the right place given the refraction of the globe? Mine’s currently looking a bit weird, but hoping when the plants all get going it’ll look better
Shrimp nano cube 20l
Adventures with my baby biorb 15l

aec34 said:
Looks great! Have you found trouble putting plants in the right place given the refraction of the globe? Mine’s currently looking a bit weird, but hoping when the plants all get going it’ll look better
Click to expand...

Its very difficult with the refraction! Sometimes its just easier to tilt my head in a different way, then it looks ok again I was putting them in, then looking from different areas and trying to figure out what to move and how much... but yes im also hoping the the fill in should improve it all.
Ramblings Journal
Flat Earth Society

Ok I folded and picked up some more tropica soil, rinsed and added another 1.5kg ish. Obviously still a little bit murky from the new dirt added 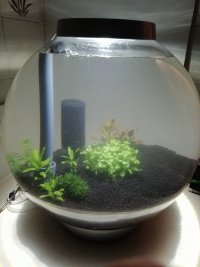 Dwarf Sag now installed.
x1
No point in overdoing it 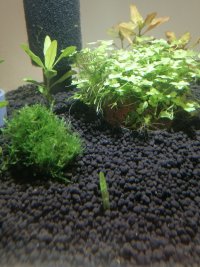 There appears to be 2 snails in there, must have snuck in on the plants. 1 is VERY fast!! and was last seen doing laps around the filter foam
Ramblings Journal
Flat Earth Society 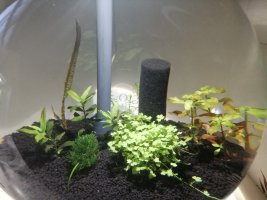 In my 72, the crypt crispulata had sent out a runner under the substrate and started a new plant up against the front glass... Maybe I should have left it I don't know, but anyway, I tried to snip it out without destroying the carpet. I think I may have messed that up as I snipped right at the bottom of the few leaves and so no roots :/ but anyway, I have put it in the ball, I'm not sure if I got enough of the plant for it to survive or not.
Diatoms have set in as one would expect, mostly on leaves of the hygro. Snails aren't keeping up with it.
But there has been growth. Slow, but growth. Most noticeable on the hydrocotyle and the lonely sag. The Egeria is perking up and standing uprightish now where before it was flopped over.
The ludwigia red is becoming green. Not unexpected as the lighting is about 2w, and is on my to do list. 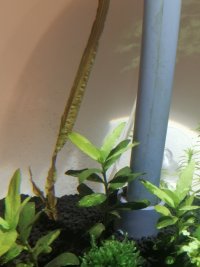 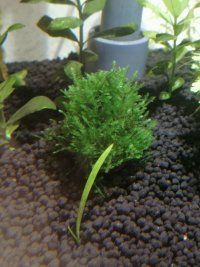 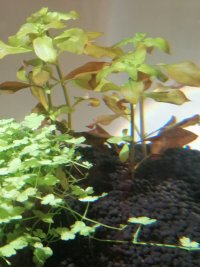 Decided to throw in some DIY co2 just to get things going a bit. For no other reason than I was bored and because I can.
There's nothing in there that 'needs' extra co2, except perhaps the ludwigia might appreciate it, but it's not going to do any harm. And as it's DIY, it'll be easy enough to 'wean' the plants off as it will naturally start producing less anyway. 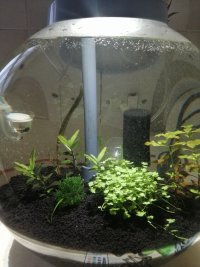 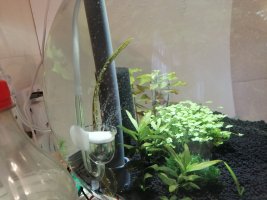 It's sitting about half way up, and behind the water outflow pipe.
Interestingly, the mist gets drawn anticlockwise (direction of flow) and then pushed down by the outflow. And I can see the fine bubbles floating around the tank throughout, from substrate to surface, in the direction of flow.
I'll chuck a drop checker in there, but it's not important as there's no critters.
Last edited: 26 Dec 2020
Ramblings Journal
Flat Earth Society

Changed the co2 from yeast/sugar to a citric acid/bicarb mix as an experiment. Running 1 bubble per 1.5 seconds roughly. 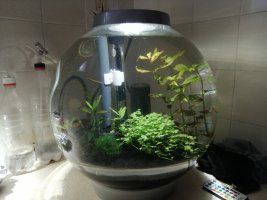 I made a DIY clip for the heater, as its too long to be able to clip to the bowl. I need to redo the clip as the glue didn't hold the pieces and I've had to use a cable tie to joint them as a temp fix, so it doesn't sit so squarely. I have the BiOrb heater clip, but needs a much shorter heater, and I don't want to shell out £30 for BiOrb's heater kit. So I've made it so it clips to the heater firmly, and to the uplift pipe much less firmly, so no risk of accidentally wrenching out the pipe if I have to remove the heater! Temp is 22deg. Without the heater, temp was settled at 16. 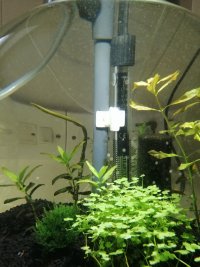 Ludwigia seems to be picking some colour back up as it gets higher, looks to have a slight hint of browny red coming on.
Polysperma doesn't seem to be doing much except gaining algae on leaves :/
ED is slowly gaining some strength but not yet running amok. As its behind the filter uplift, im hoping that as it gets higher, it'll pick up some current and swirl around the bowl.
Cypt crisp appears to be not dying. Also not growing, but it seemed to wilt a little and has picked up a bit since...
Dwarf sag has done nothing. Well it's leaf grew a bit taller, but aside that, it's been lazy. I've cut the leaf in an attempt to encourage its growth. 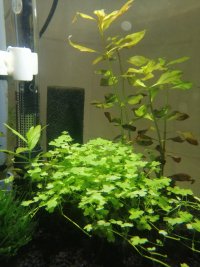 Still a lot of unused space, perhaps I need to remove the hydroctotyl rock and plant it into the substrate? 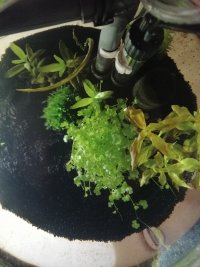 I found a spare juwel heater clip (goes inside there built in filters) so butchered that... I can't seem to get the 2 plastics to bond, so again with the cable ties...
Marginally less ugly than the previous bodge. 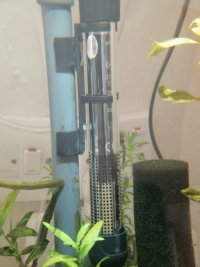 The usb "silent" air pump had gotten a little noisier over time, and this evening it looked like it wasn't pushing much air at all :/

I rolled back the rubber sleeve (like you might find on a cricket bat) which revealed 3 teeny screws, undid these and took the cover off, reseated the rubber diaghram and reassembled. Back to being fairly silent and pushing air again

Ludwigia has just reached the surface.
I gave the hydrocotyle a trim.

Oh, also I found a rock in the bathroom that I'd forgotton was there so chucked that in also. 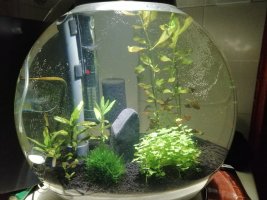 dcurzon said:
I found a rock in the bathroom that I'd forgotton was there
Click to expand...

There speaks an aquascaper.

woke up and walked into the kitchen to make my first coffee of the day, to find the citric acid and bicarb bottles empty. Seems a hose wanted a taste of freedom, and the price to pay was wall to wall, floor to ceiling sticky mess. 800ml's doesn't sound much, but pressurised and spraying through 4mm hose ensured a good coverage ensued.

I wouldn't mind, but id just recently cleaned the kitchen, and now I need to literally blitz everything again.
I think this was user error. I'd given the bicarb bottle an inquisitive swirl last night and really shouldn't have.