@GHNelson it certainly looks similar to what I have. However, considering that I bought this ludwigia as a bunch plant from Petco it seems unlikely that it would be such an uncommon species. I think it was labeled as Ludwigia Repens Broadleaf when I got it. I will have to check the tags next time I am at petco. I'm pretty sure it looked like L. Repens when I bought it and then evolved into its new look after it started growing in my tank.
First tank since 2016 is in progress!

After fighting a massive wave of green spot followed by the invasion on a seemingly un-killable staghorn and decorating plant health I did a massive rescape of the tank about a week ago. Here's the final picture of the tank with its orginal scape.

Part of the reason for the reason for the rescape was that the gorgeous stump I used a centerpiece was falling apart which I suspect was not helping the algae problem, though I'm sure monkey with co2 in an attempt for better efficiency was also a main cause. I also needed to get in there and remove as much dead and dying plant matter and algae as I could.

The new scape is all local rock (a mud stone I believe). I've also decided to just accept that this tank needs a high injection rate, bring nitrogen levels up to 25 ppm, and try to avoid excel and h2o2 (I managed to melt a lot of the plants at one point). I'm also currently using flourish comprehensive with some addironal Fe-DTPA instead of the CSM+B & Fe-DTPA I was using.


Here's how it looks one week in. It's a bit crowded as there are some crypts and lily bulbs I need to sell or give away. The left is also a mess as I am mainly working on bringing my stems back from the brink of death. However, I would appreciate any critiques or suggestions. 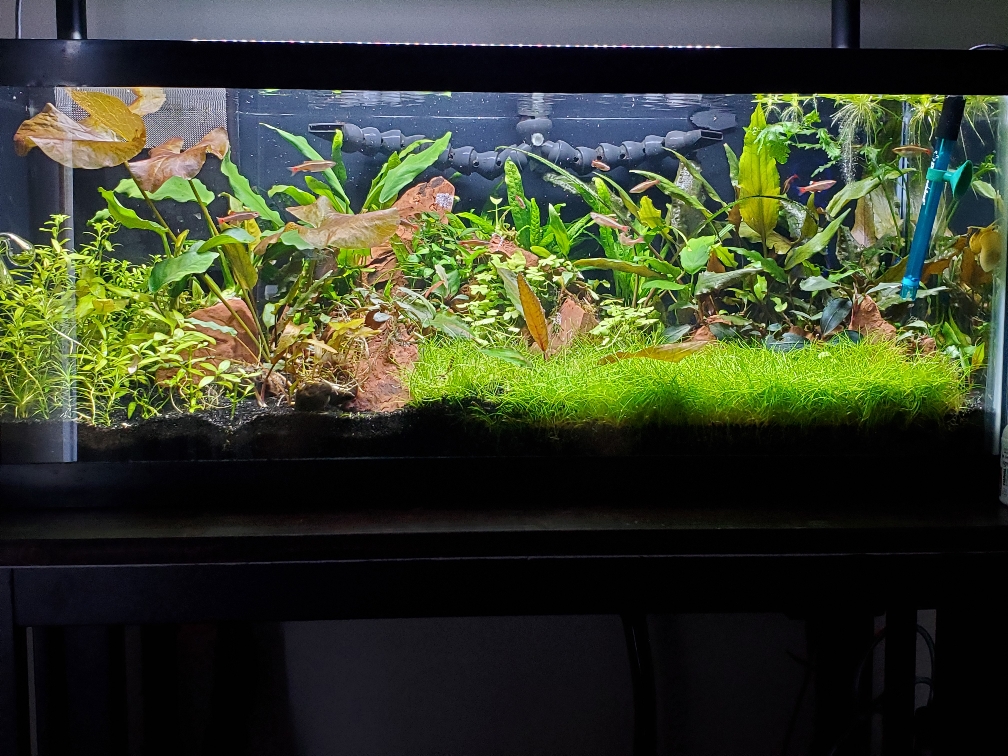 The final news is that I picked up a fluval 3.0 a few days ago. I had to hang it pretty high to get decent coverage and the ends still seem a little dark. Any feedback on the light settings are appreciated as I chose them somewhat arbitrarily.

Sent from my SM-G970U1 using Tapatalk
First tank since 2016 is in progress!
You must log in or register to reply here.