Daphnia population explosion in Ember Tetra tank. Too many?

Question for those of you who grow your own live foods.

I seeded my ember tetra tank with Daphnia and Tubifex long before adding fish and shrimp.

I add spirulina powder to the tank every few days to sustain the daphnia. Initially the teras ignored the daphnia completely as they were possibly too big for them. The tetras were really tiny when I got them. Now they do pick off a few but tend to go for the babies.

In the past week the daphnia have bred like crazy and the water is full of them. Shoukd I syphon some off? At what point does the culture crash?

Tank isn’t filtered other than a fluval breeding box filled with gravel, hydroleca and plants. The water trickles through it slowly.

Heater is off but still in the tank

Light is an IKEA desklamp with a 4w daylight led bulb.

Water is murky as I just fed the daphnia 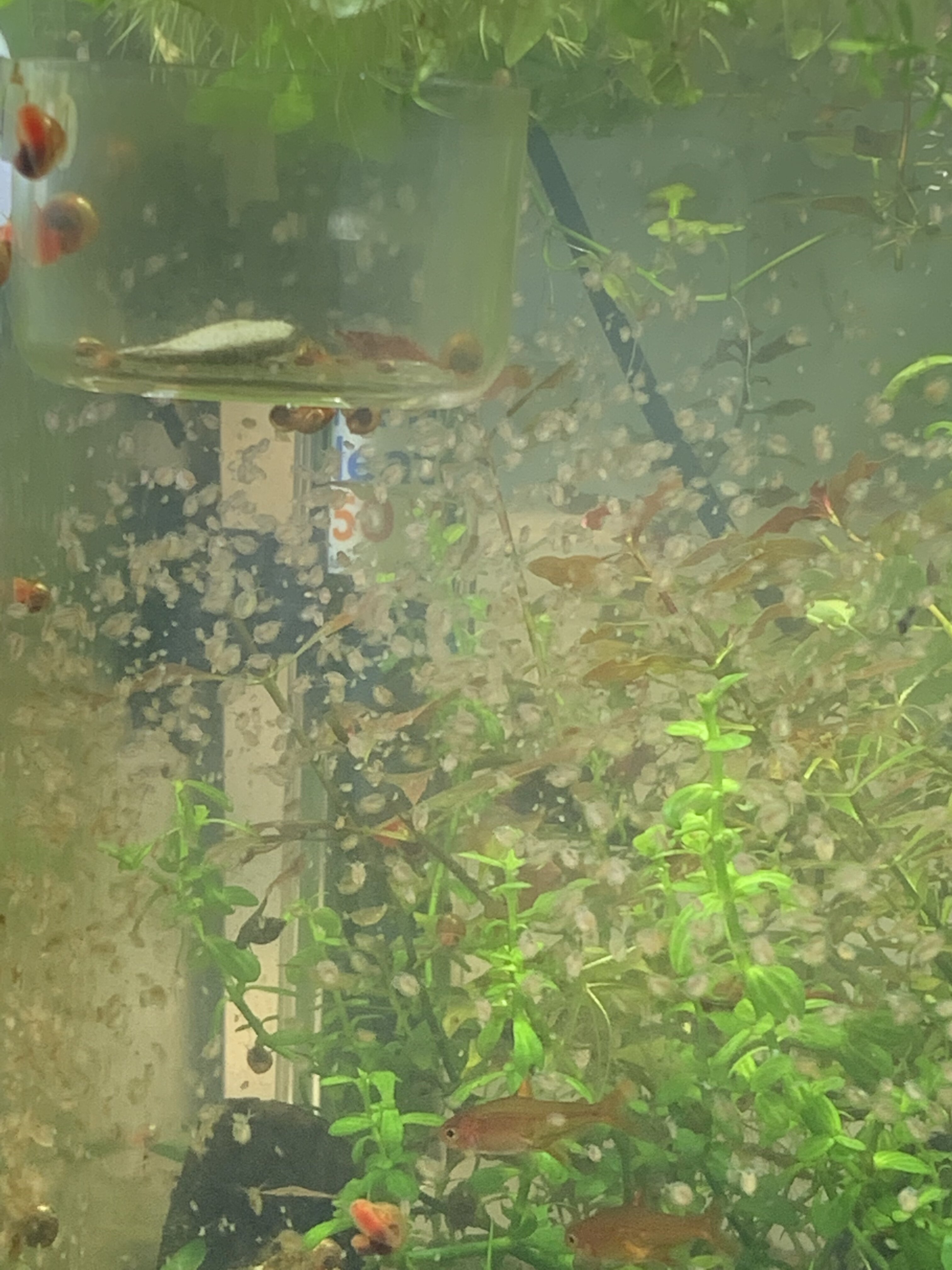 Sort by date Sort by votes

That photograph is surreal!
The shrimp, snails and possibly tubifex (scavengers) will consume dead daphnia when they are hungry. The California Blackworm Lumbriculus variegatus is a rather effective scavenger worm generally speaking.
Consider ammonia levels, oxygen levels, feedstock, and you water change regime. Consider what a crash actually represents, and how it impacts other species. Think about the trophic levels and how the ecosystem can adapt.
Obviously if you decrease spirulina, then you will slow daphnia growth.
If you provide other food to the carnivores, then they will consume fewer daphnia.
You could also introduce a daphnia predator temporarily. I can think of quite a few nymphs and insects that would be safe with your other aquarium species, a few that would fly off eventually.
This is not a culture per se. It is an ecosystem, and ecosystems are dynamic. You could get a population crash or an ecosystem crash, so mitigate this.
There is no reason why you should worry unless for example you cannot avoid toxic ammonia levels from building up of if you feel that oxygen levels are too low etc.
If the daphnia population starts to crash, then do a water change to remove the ammonia. Remove some daphnia to reduce the likelihood of a crash if you want.
Last edited: 25 May 2022
Upvote 0 Downvote
A

Thanks for the advice.

I’ve assumed that having a healthy and increasing number of daphnia and shrimp in the tank means the tank is fine. Water tests show no ammonia, nitrite and low nitrate whenever I test. The tank is heavily planted above and below the water. Very little substrate is visible and there are several houseplants drawing nutrients from the water. I do a water change once a week and that water along with any daphnia that go up the siphon end up in the pond outside.

I siphoned some off after posting this and added them to my pygmy cory tank to supplement the daphnia there as they do control the population in their tank but never wipe the daphnia out.
Upvote 0 Downvote
A

I wouldn’t know where to get black worms from.

I monitor the number of ramshorn snails that appear when I add an algae wafer. If there are a lot I remove some and add them to the pond. If the numbers are increasing I use a turkey baster and airline to clean the substrate a little
Upvote 0 Downvote

Wow, I've never seen that before in a tank with fish.
.
Aquazeitgeist. YouTube
A Brief and Incomplete History of Aquascaping. Soil Substrate Planted Tank - A How to Guide
Schism Reimagined. NatureScape. Return of the Shallow. Windswept Eternity, Primordial. The Dark Side or What Lurks Beneath
Upvote 0 Downvote

Wow! That is some serious in-tank culture. I'm surprised your Embers aren't swimming around with bulging bellies gorging themselves.

Whilst daphnia themselves are a good canary of good water quality, the risk is a crash. I think you have done the right thing thinning them out to manage the daphnia population.
Upvote 0 Downvote
A

I thought the tetras would wipe out the daphnia in a day or two. They do eat some

Ember tetras are the only fish lazy enough to allow a daphnia population explosion like that. Absolute layabouts.
Upvote 0 Downvote
You must log in or register to reply here.

A
When to start a daphnia culture outside?