I have some cryptocoryne and some lately show an excessive downward curling of the leaves. Not all crypts have this but till now only the Indonesii and Willisii show this. In a way this developing waving leave edges is natural for most crypts.. But with these types it lately became more looking like curling inworths than waving.

Now did some searching and couldn't realy find much about it, but 1 that could make sense. It was said if an excess or up change in Nitrate causes the leaves to curl in and takes time for the plant to addapt to the new parameters.. This made sense to me, i started noticing this growth patern since i changed to use dry salts as ferts and also added 10ppm KNO3 in the regime. Before that with the tropica complete the plants didn't show this.

I know i have Nitrate in the tap water and nitrate ofcourse is produced by the lifestock. So for now i stopped adding KNO3 and for now only add KH2PO4 and K2SO4 and see if it changes back again.

Anyway, my question is, anybody else experienced this symptom with crypts and can confirm it is indeed an excess or change in Nitrate?
Cheers,
Marcel..
Tanks for watching.

Hi
Following with interest as had same issue with my last high tech tank.
Cryptocoryne, Alternanthera mini some bucephalandra all curled with the curled leaves remaining slightly smaller.
This happened after switching to diy fert with ei starter kit from Aquarium plant food. I think your assumption abot NO3 may be correct
Regards Konsa

Yes I did have wavey edges and curling of the leaves too, plus pin holes which grew. But I had very high light at the time to get my carpet to recover from a trim. Increased my [CO2] very high (went though 6kg bottle) still no improvement. Checked the K and Mg levels I was dosing via EI starter kit which was a tad on the lean side so increased those levels. Plus had mould in macros.
So trimmed the crypts to AS and reducing light as carpet was growing well.
Crypts growing well ATM, lovely colour only few weeks since trim.
Think my issue was too much light. But the whole tank did pearl very nice with it.
So I'm following with interest to, esp with being a noob

Sent from Mountolympus via neural interface

IFC Aquarium Fertilizer Calculator
Journal - Olympus 500L is Calling, Journal - Pot Scape 50l
"God is in the details." -Mies van der Rohe : "Do or do not, there is no try."-Yoda

Is it like this? This is in my low tech no ferts tank... Not sure its nitrate related. Doesn't look great. Leaf isn't melting, although its a bit aglae-fied. 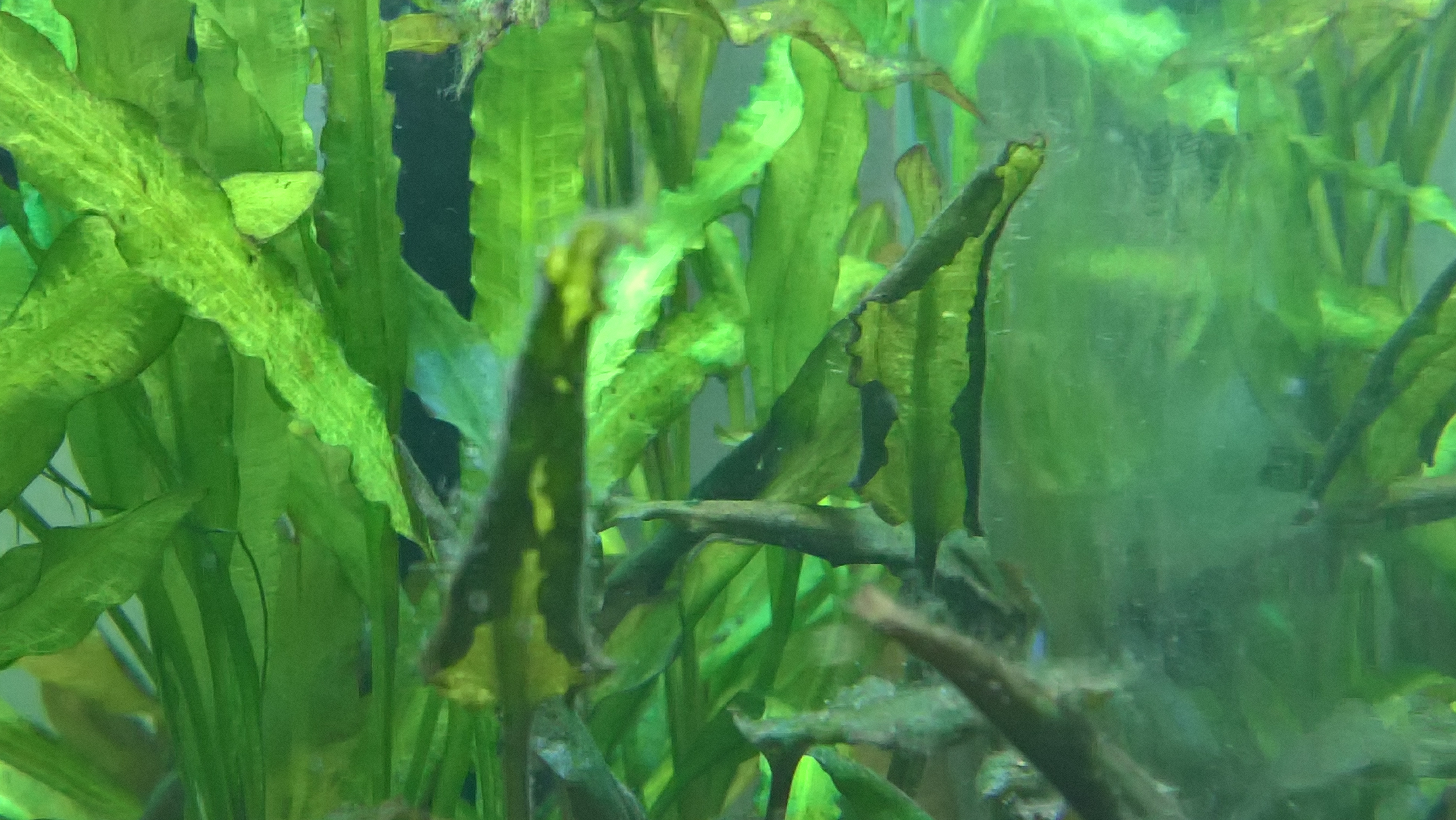 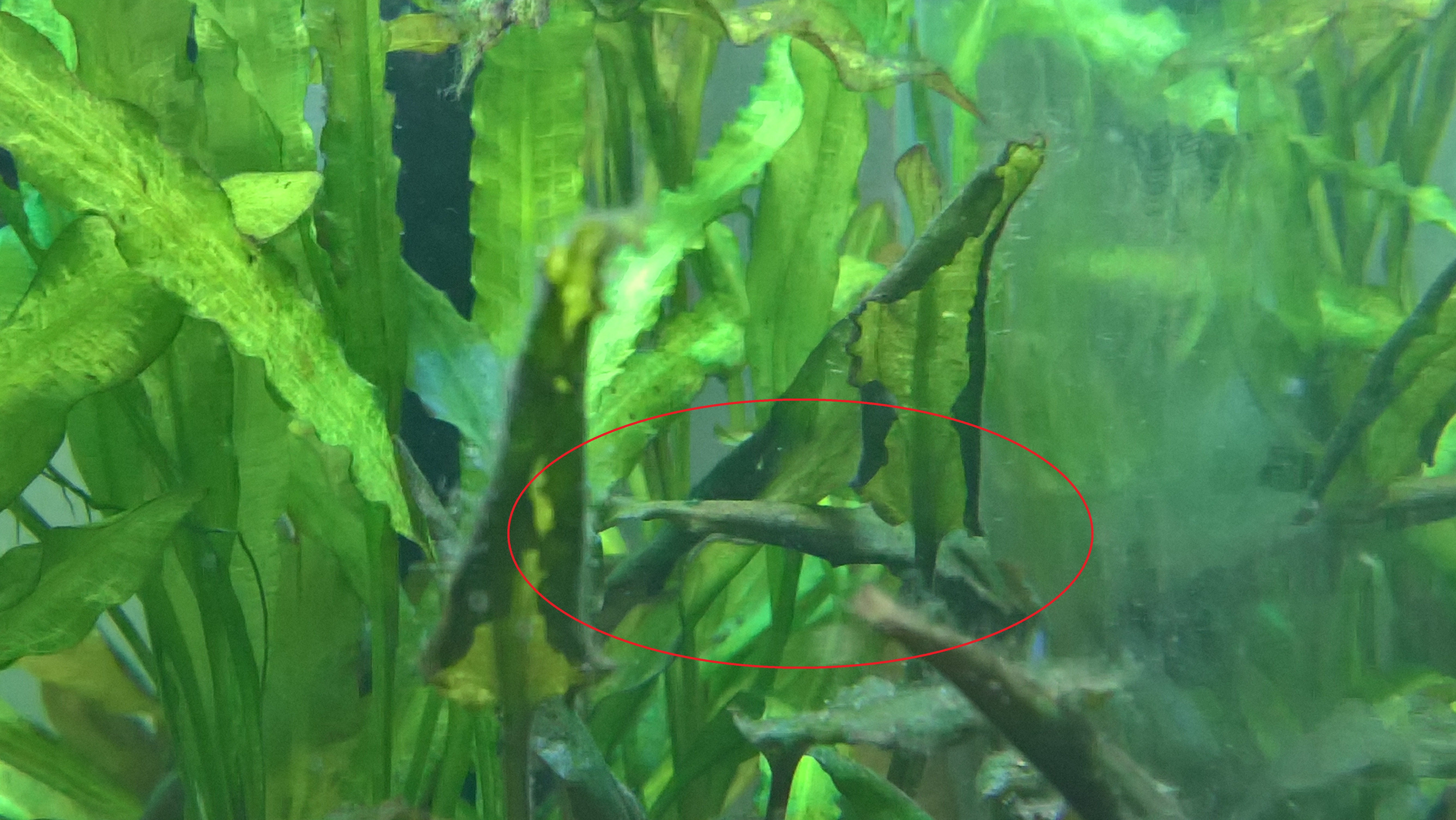 Over a year everything was fine, i switched fert regime and suddenly see this.. Also more melting all over the bush became thinner. More leaves melted away.. Actualy 2 things have changed.. My tank is naturaly lit during the summer and artificialy during the winter. This is it's second year, could be since the plants matured a year longer that it's a light deficiency. Mine are in a somewhat heavily shaded spot, with floating vegitation above it.. Anyway i stopped adding KN03 and switched on the lights again to see if it comes back to what it was. According the unrelaiable test i have + 10 Nitrate from the tap. That should be enough with the fish pooping etc.
Cheers,
Marcel..
Tanks for watching.

@zozo did lowering nitrates helped in the end?

MrClockOff said:
@zozo did lowering nitrates helped in the end?
Click to expand...

I don't know... It just went to normal again and never seen it again. It took a while tho.
It never happened again. So I guess if you can't replicate it there is no saying what causes it or cures it.
Cheers,
Marcel..
Tanks for watching.

Melting tissue and any deformation of leaves is cause by poor CO2.

I’m not sure if that related but all started when temperature outside started rising. Despite I’m using aircon the temperature goes up to 27 - 28c in my fish tank where normally it’s sitting around 24-25c.
Also I have realised I was underdosing micros according to EI but that was for more than 6 months without the issues.
Crypts not melting though just curling

MrClockOff said:
I’m not sure if that related but all started when temperature outside started rising. Despite I’m using aircon the temperature goes up to 27 - 28c in my fish tank where normally it’s sitting around 24-25c.
Click to expand...

It may or may not be related. The solubility of any gas in water decreases as the temperature increases. Even small changes in the temperature can result in large changes in CO2 if the injection rate is not adjusted to compensate.

MrClockOff said:
Also I have realised I was underdosing micros according to EI but that was for more than 6 months without the issues.
Click to expand...

As you yourself can attest, under-dosing or overdosing any nutrient, especially micronutrients has no relevance to this type of damage being observed.

Yes, curling is CO2 related. remove the deformed leaves as they will never recover and as they are a drag on the plants resources and either adjust the CO2 and/or perform a general trim to provide better flow path. There are as many ways to have poor CO2 as there are hobbyists using CO2.

ceg4048 said:
Melting tissue and any deformation of leaves is cause by poor CO2.

In my case, it was in a low energy tank that has never seen any other CO² than what it gets naturally. It started out ok with the plants they grew very healthy the first 2 years and then suddenly started showing this deformation. A bunch of these plants died off and what survived still grows on today rather healthy. Not showing anything strange. But that was all in 2017. This tank still is running today it's still growing the same plant species but growing at different locations as they decided to spread naturally through the tank competing for space with the other plants. Meanwhile, the C. Usteriana has taken over this tank with lots of runners growing big and provides a lot of shade, the C. indonesii and C. lucens are still with it, growing healthy but significantly smaller, today they grow more like a carpet than a centrepiece plant. During the summer the Lily and her runners do the same and shade the tank with loads of floaters. It's a completely different aquarium than 4 years ago. But still low tech.

Still, it could definitively be a CO² issue, not adding any doesn't say anything. I guess due to other natural factors CO² availability will be something dynamic especially in a low energy environment. Looking back to when I started this thread it was June 2017, thus in the summer with a warmer temperature thus likely less CO² available in the water column. But in the 4 years after this, I have never seen the plants show this symptom again. Even not in summer 2020 which was extremely warm for a rather long period.

I can only say, something changed to make the plants do this rather suddenly, the cause remained a mystery to me. And it was only the C, indonesii and the C. lucens showing this, the C. usteriana and the C. wendtii weren't affected.
Cheers,
Marcel..
Tanks for watching.

zozo said:
Still, it could definitively be a CO² issue, not adding any doesn't say anything. I guess due to other natural factors CO² availability will be something dynamic especially in a low energy environment. Looking back to when I started this thread it was June 2017, thus in the summer with a warmer temperature thus likely less CO² available in the water column. But in the 4 years after this, I have never seen the plants show this symptom again. Even not in summer 2020 which was extremely warm for a rather long period.
Click to expand...

Hi Marcel,
Yes it always appears as if something suddenly happens, but actually it's a process where the plant tries lots of tricks and finally runs out of steam. One of the main reasons crypts and swords have extensive root systems is that they can collect CO2 from the roots, but it's not an easy task and eventually, this mechanism can fail as well. This is what can happen when a plant is uprooted and moved to another location in the tank. The root CO2 uptake mechanism is disrupted and depending on availability in the water column the entire system may fail if the total supply was marginal to begin with. This even happens in a CO2 injected tank if flow/distribution is sub-par. CO2 and gas exchange in general is the most misunderstood subject in the hobby. As the temperature increases and the CO2 availability falls the plant will increase the Rubisco supply to increase the CO2 collection sites. This is another slow process that takes a few weeks to accomplish. If the basic infrastructure of CO2 collection and storage is good the plant can "weather the storm". If not, various failures will occur depending on the severity of the problem.

The main thing to remember is that carbon is used to build structure in plants, therefore, any structural flaw can be traced entirely to an unavailability of sufficient levels of carbon. That makes the troubleshooting easier, but makes the solution problematic.

Cheers,
You must log in or register to reply here.
Similar threads