Just want to get this off my chest. Judge me however you like.

Im absolutely sick of people asking me for money. I buy a poppy out of respect for my great granddad who is now deceased, and for all the others who went to war even if they didn't want to, for all the loved ones who lost their loved ones and all the tradegy in it all.

I also sometimes donate to the air ambulance. They do an amazing job at saving lives. As do the RNLI and the ambulane service.

What does my head in though is all these people collecting for charities and trying to make you feel guilty for not giving. The country is in a financial mess due to greedy people. We need to minimise foreign leakage. Also the way big companies spend millions on sponsorship keeping the richest people rich. I mean to some degree its good because some sports need cash but at the end of the day we are all paying for it as consumers and too much is being given out.

It is a shame that the people in Africa are starving but theyre avoiding the real problem that the world is over populated and they are living in an inhospitable place!

I certainly don't have all the answers. I do have a child and family too took after, I do have a house and a car to run and at the end of the day I don't love my job. I go to work to get paid for money for what matters to me.

Does anyone agree with me or am I just turning into a grumpy old man lol?

Me to I support help for heros and donate to the poppy appeal due to being ex army and I donate to the rnli when I can, for me I suppose im a bit of an idealist and believe charity begins at home, ive been accused of being narrow minded but I live with that

ditto, I always purchase a poppy, and donate to help for heroes and local charities as and when I can but the amount of people i get at my door each month pressurising me to give to aid 1000's of miles away is starting to take the p###.

Mark, what regiment did you used to be in?
First Journal - A beginners insight to the south americas! | UK Aquatic Plant Society

AAC down in Winchester

I agree that begging charities are a bit much, but I disagree with what you say about Africa. Their problem is nothing to do with overpopulation, but a combination of complex social, political, and ethical problems that have been caused/ exacerbated by various members of the international community.

The fact that the Air Ambulance service and the RNLI have to be kept afloat (no pun intended) by charitable donations is absolutely disgusting. They provide invaluable, life saving services every day. I'm sure fat bank bonuses could be put to much better use in subsidising these services.

dan4x4 said:
I mean to some degree its good because some sports need cash
Click to expand...

Not to be inflammatory, but what do you mean by this exactly?

sa80mark said:
AAC down in Winchester
Click to expand...

Wasnt my first choice, my recruitment officer kind of bullied me into them, glad he did though, fantastic part of the army and will only become larger

Im not surprised. I was talking to a few of them at an air show I was working a few years back and they all seemed to love it!
First Journal - A beginners insight to the south americas! | UK Aquatic Plant Society

Totally agree. This time of year especially does my head in, I can't watch children in need or comic relief because it's nothing but a guilt trip and I'm sick of being made to feel guilty for the little I do have.

Don't get me wrong, I buy a poppy and a cross out of respect to everyone involved and scared by war and I give to charities that I feel do good work (shelterbox comes to mind considering what's happened recently) but I do this when I can afford it and when I want to not because Lenny bloody Henry has gone to africa again... which is all so corrupt you should just keep your money in your pocket.
Ben

Lets be a little careful here and considerate. There are many less fortunate folks than ourselves, as there are those more fortunate. It can be frustrating being asked for cash on every street around town and on the tv, but they do this in the main part for good causes and they fear 'out of sight out of mind' so push the charity, no more so than advertisements etc imo. I dont get much door to door charity requests, but that would be more frustrating and is a little less acceptable imo.
We all have a choice, i choose to whom i donate and when and therefore i never feel guilty for not donating to some, i politely decline and carry on, but i dont blame them for trying
Cheerio,
Ady.
Re-education Journal.
NAtural Jurassic Journal.
Dragons Crypt Journal.
Sticks and Stones Journal.
Dusting off the old Fluval Studio 900 Journal.
Aquanano 40 CRShrimp tank Journal

It is a shame that the people in Africa are starving but theyre avoiding the real problem that the world is over populated and they are living in an inhospitable place!
At times I wish there was a don't like option and this is one of those occassions, I'd rather have naff all for Xmas and give to people who haven't a home right now(Philippines). Your opinions about Africa makes me think of small minded people like Nick Griffin as you say the world is over populated what are you saying we need to purge?
A good turn never goes Un-punished. I opologise in advance as I will ruin your thread.

A large area of Africa is highly fertile, and has a decent amount of rainfall. It also has enormous mineral wealth. Charities need to stop perpetuating the myth that they're poor because they can't grow food. They're poor because their is constant war, and the countries are controlled by corrupt governments. Colonisation (rape) doesn't help either.

Vaguely on topic.... Street collectors, the ones that get you to sign up for regular donations to a charity, are known as 'chuggers' in the trade. Short for 'charity muggers'. They are not directly employed by the charity they are collecting for and a huge amount of money gets siphoned off before the charity sees a penny.

Steer well clear, literally, as they are not allowed to chase you across the street. Shout '3 step rule' at them if they are overzealous in their approach and watch their reaction.

I occasionally talk to them if I am interested, and make a point from the off to say under no circumstances will I give them a single penny or any of my details but that I will go to the charity direct at a later date. That weeds out the ones making money from the ones with heart.

People shaking a tin are a different kettle of fish and are straight up volunteers. Money straight to the charity, all of it. It's not an easy gig so spare them a thought when you see them. You can stand in the cold all day and get less than a fiver, spat on and shoved, and if you start to switch off after a while there is a good chance someone will try and nick your tin (in London). With a popular cause, a good spot and a bit of luck though you can collect hundreds at a time. So it really varies.

Rant off. Hope that was educational for some!
M

I don't enjoy carrying copper pennies and five pences in the pocket so I off load them at counters and what not, every little helps. Even if people judge me for a few coppers, its usually all the coppers I have, I genuinely believe I have helped out. As some have said you have the choice, they can't force you, most of the guilt is developed by ones self when they feel bad for not giving. But that is not a bad thing, because it shows that you do care, start worrying if you don't feel bad. There can be mental support and physical support.
Not the best looking aquariums as I'm still a novice in keeping aquatic plants but I hope yous can follow my progress,
cheers,
Michael.
Low Tech 30L Betta aquarium
Low Tech 30L Shrimp aquarium
Orchids

Its just my thoughts on it, I had a bad morning yesterday so had to get the rant out!

its interesting to see the comments though. Like I say I don't know the answer but people have been thowing money at it for way too long and nothing seems to change. I agree that there are fertile place, Africa is amazing place when it comes to the natural world. I love watching wild life progammes about it. At the same time im just sick of people asking for money.

I am lucky when I see the poverty and tragedy some of those people go through. But at the same time ive got my own problems and so does this country and I think they need to be tackled first. There are some very worthy causes and if I had an amazing quality of life I would probably give more. The fact is I have given a lot already. Shouldn't be up to people struggling along in life to give money though. It should be up to all the greedy people in the world earning millions living in their ivory towers to sort this out though.

Don't even get me started on banks. They have people working in call centres working horrible hours, blahblahblahblah conditions, crap pay, then they have top bosses living to excess, getting paid bonuses even though theyre doing a blahblahblahblah job!

on a lighter note look what we saved from a surface water sewer... 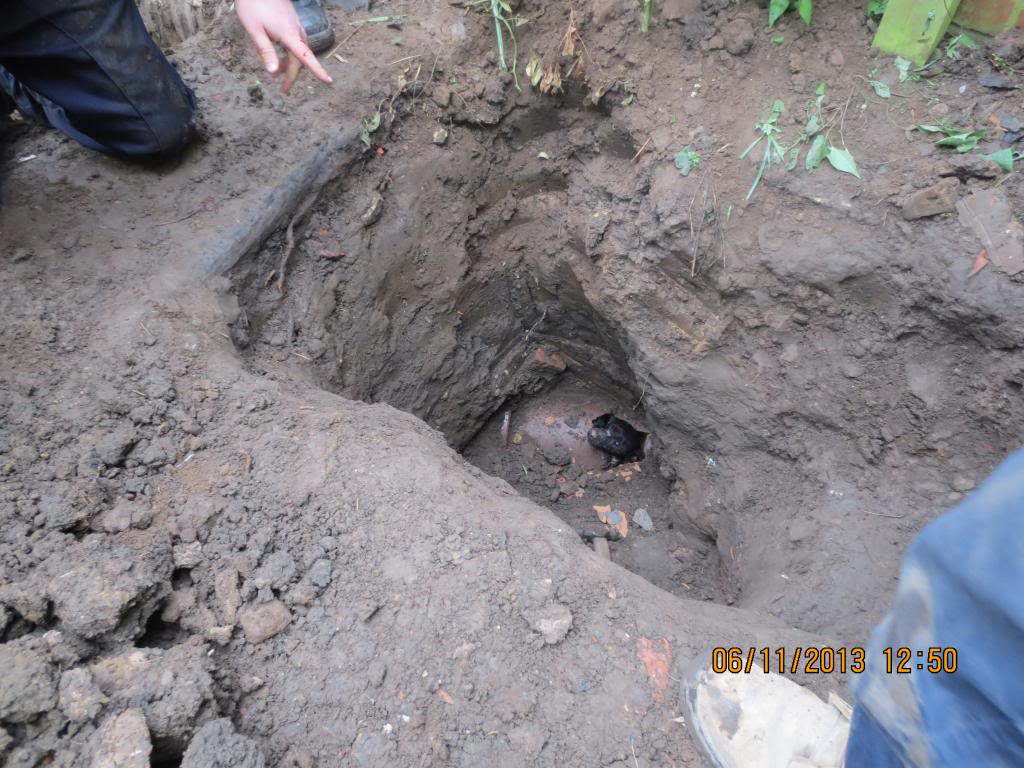