bazz said:
Hi,
Be warned regarding A. Crispus. Mine has suddenly taken off and is now producing a new leaf every couple of days which are 30mm wide and over a metre long. I'm going to try and remove it tomorrow during maintenance and may well have to sever the leaves just below the top of the substrate as I fear pulling it up will destroy the integrity of the substrate.
My aquarium is 900 x 550 x 530mm:
Cheers!
Click to expand...

I probably have way overplanted with them, and will hopefully have to remove half of them once they take off, but it's anticipated and planned for.

At least they don't produce runners everywhere like the crispatula did, in addition to roots almost pinky finger thick; covering almost the entire footprint of the tank. The back corner where they were originally planted had a 2-3 cm layer of roots at the bottom glass, no substrate, just roots...

So, warning noted, but I'm not too worried : D

In other news, chugging along nicely. Waterchanges (almost) everyday, dosing EI as of today. No melt, no algae, no problems. There must be mayhem just around the corner...

I probably lost a few green jades, maybe they had trouble acclimatising, and at least one seemed to have some molting problems. Also saw an amano munching on one more... Last count gave around 12-13 minimum and amanos seem to leave the rest alone, so fingers crossed.

Looking forward to the year 2525 where I can finally remove the grey rock from the big root. 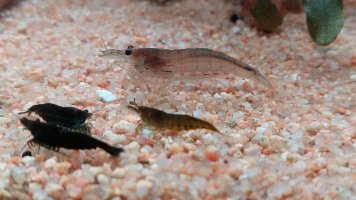