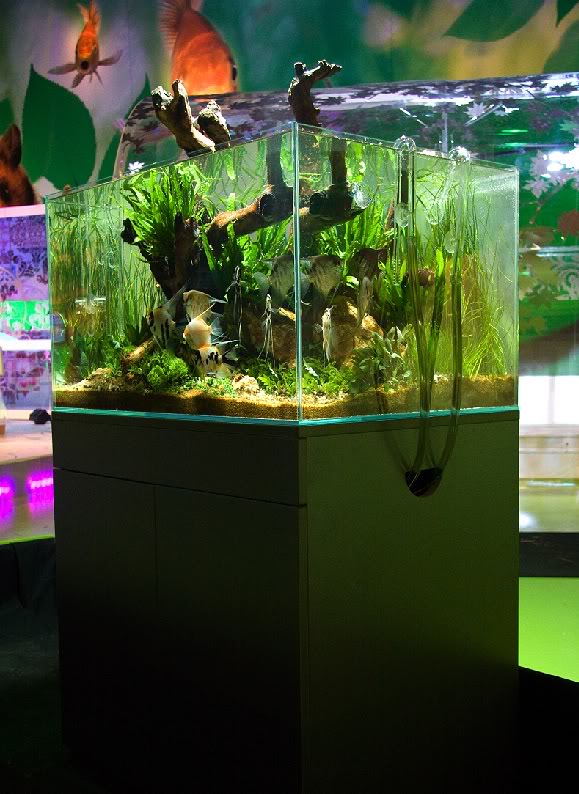 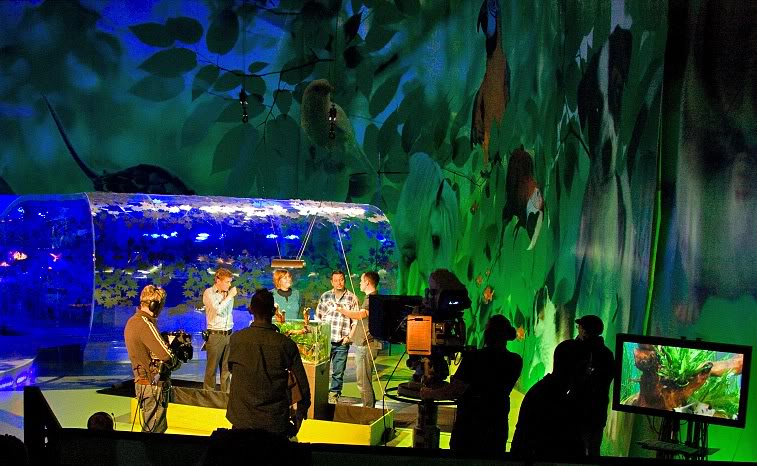 The show celebrates the nationâ€™s obsession with pets and a researcher spoke with me after Practical Fishkeepingâ€™s recommendation regarding aquascaping.

I was interviewed on set next to our completed display aquarium by Liza Tarbuck and Huey Morgan (Fun Loving Criminals frontman), along with guest celebrity, Antony Worrall Thompson who is also a fishkeeper. I discussed the contrast in what we do as aquascaping compared to the typical ornamental aquarium filled with tacky dÃ©cor, as well as the hardware aspects amongst other things.

The tank was Dan Crawfordâ€™s brand new opti-white open-top 80x55x45(H)cm complete with overtank lighting and full glassware set-up, planted with almost 100 Tropica pots (including plants attached to dÃ©cor). Unipac supplied the amazing piece of Sumatra wood, Petrified wood and substrate. Fish were ten adult Angelfish supplied by Wildwoods. The aquarium was set up on set in the BBCâ€™s Wood Lane studios; an awesome place to work in!

My biggest concern was ensuring the water was gin clear prior to filming, as we were on a tight schedule. Usually I let my tanks clear overnight at least prior to photographing but we only had a few hours!

We cleaned the coarse silica sand, Petrified wood and Sumatra wood thoroughly prior to installation to minimise clouding. We then filled the tank slowly using hose, colander and plastic sheet draped over the aquascape. We used two large external filters filled with mechanical media and ultra-fine floss. The water was brought to temperature quickly and the fish settled within minutes. The whole setting up and aquascaping process took just over two hours (although the prep work took months!)

Everyone involved with the show, including Liza and Huey, seemed really impressed by the finished set-up and at one point there was around 20 production staff around the tank admiring it. The producer herself found us and sang our praises which was a real buzz.

As mentioned, I was assisted by fellow keen aquascapers, Dan Crawford and James Starr-Marshall. We worked flawlessly as a team that allowed the full aquascape to be created in a relatively short time. James prepped the plants whilst Dan fitted all the aquarium equipment such as filters and CO2 gear. I set up the hardscape and substrate with some creative guidance from James and Dan and we all began planting into the wet substrate.

I had an idea of what the finish aquascape would look like but it exceeded my already high expectations. Creating a mature-looking aquascaping instantly is a challenge but made easier with high density planting and decent hardscape.

The aquascape feature only lasted a few minutes during the actual broadcast but I hope it inspires and creates as much interest as it did during filming. Aquascaping using live plants and natural materials was a new concept to many. The biggest reward was hearing a celebrity referring to what we do as â€œliving artâ€.

Look out for a HD You Tube clip coming soon...
www.georgefarmerstudios.com

I got nervous for you.

Looks great to me, George - a super plug for planted tanks, and not a nerd in sight!!
Cape Clear

, I said at the time that you came across really well.
I think you should have your own show mate.
I can't wait to see how the tank looks in Hi-Def

Hopefully they'll be an HD version on You Tube soon...
www.georgefarmerstudios.com

Pity it was short a small segment, The Tank And Angel Fish looked Amazing in HD( I would download to the PC and Upload, but dont have the Cables to do it, from the HD Box). I Could see your reactions to the noobie feeding story from Anthony Warrell Thompson - Priceless.
Shame they could not remember any of the details of the 800 Year Old Koi that have been found in that Monastry.
Meander, Titans, Molten, Sea of Ferns, Pico tbc
Experimentation is the key to growth - Pardeep

Gill said:
I Could see your reactions to the noobie feeding story from Anthony Warrell Thompson - Priceless.
Click to expand...

I did the same as a kid - probably explains my reaction....
www.georgefarmerstudios.com

Well Done George, you did really well mate. Im proud of ya

Im glad you see you said "we" too,lol.

I think its great to see this on TV and it will have the desired effect for sure. Morning TV next mate!!!

Well done to Dan and James too, very important cogs in the machine.

I totally forgot this was on TV, thanks for putting the link on George, the tank looked fantastic by the way and what a good plug

Im glad you see you said "we" too,lol.

I think its great to see this on TV and it will have the desired effect for sure. Morning TV next mate!!!

Well done to Dan and James too, very important cogs in the machine.


altaaffe said:
I totally forgot this was on TV, thanks for putting the link on George, the tank looked fantastic by the way and what a good plug

Thanks again! Hopefully the HD version will be up soon - I've not even seen that yet!
www.georgefarmerstudios.com

I had totally forgot about this, just watched it. Looked really good. One mans mission

I liked how you added in we too.

What was the game afterwards?! I need sky player stat!

Great work guys! Is it just me that finds it weird to see Huey from the Fun Lovin' Criminals doing a pet show?

Well done everyone, it looked good and presented very well

Sorry.. I did't see it.. I was even wondering why was it not posted..

I usually read the posts from the back first.

We have just watched the clip on YouTube. Very well presented and no nerves in sight (presumably because ''he's only in the RAF!'')! Excellent set up and congratulations also to Dan and James. Many thanks for using Unipac products so effectively. Glad to be able to provide you with them. The piece of Sumatra looked awesome, even if I say so myself!!

Here's a better you tube clip, unfortunately the HD recording went wrong but the 576p is still fairly clear.

Cheers,
James
James Starr-Marshall
http://aqueousart.co.uk/
You must log in or register to reply here.
Similar threads