Journal A nursery for my Carinotetraodon Travancoricus.

mort said:
How many do you in there now? I can see one near the centre.

Curious because stocking density advice seems very mixed and it would be nice to hear from someone that knows the fish well.
Click to expand...

General rule of thumb is minimum 60lt tank,10lts per fish although personally I think 6 in a 60lt would be pushing it but depends how well they get on.
Currently I have 10 in a 120lt (2m/8f) which once they go into the 180lt I will increase to 15 or so I think....some of them are over an inch snout to tail so not as tiny as some people like to think.
As with all fish that are settled in a tank you see less of the shoaling behaviour until it come to water change time 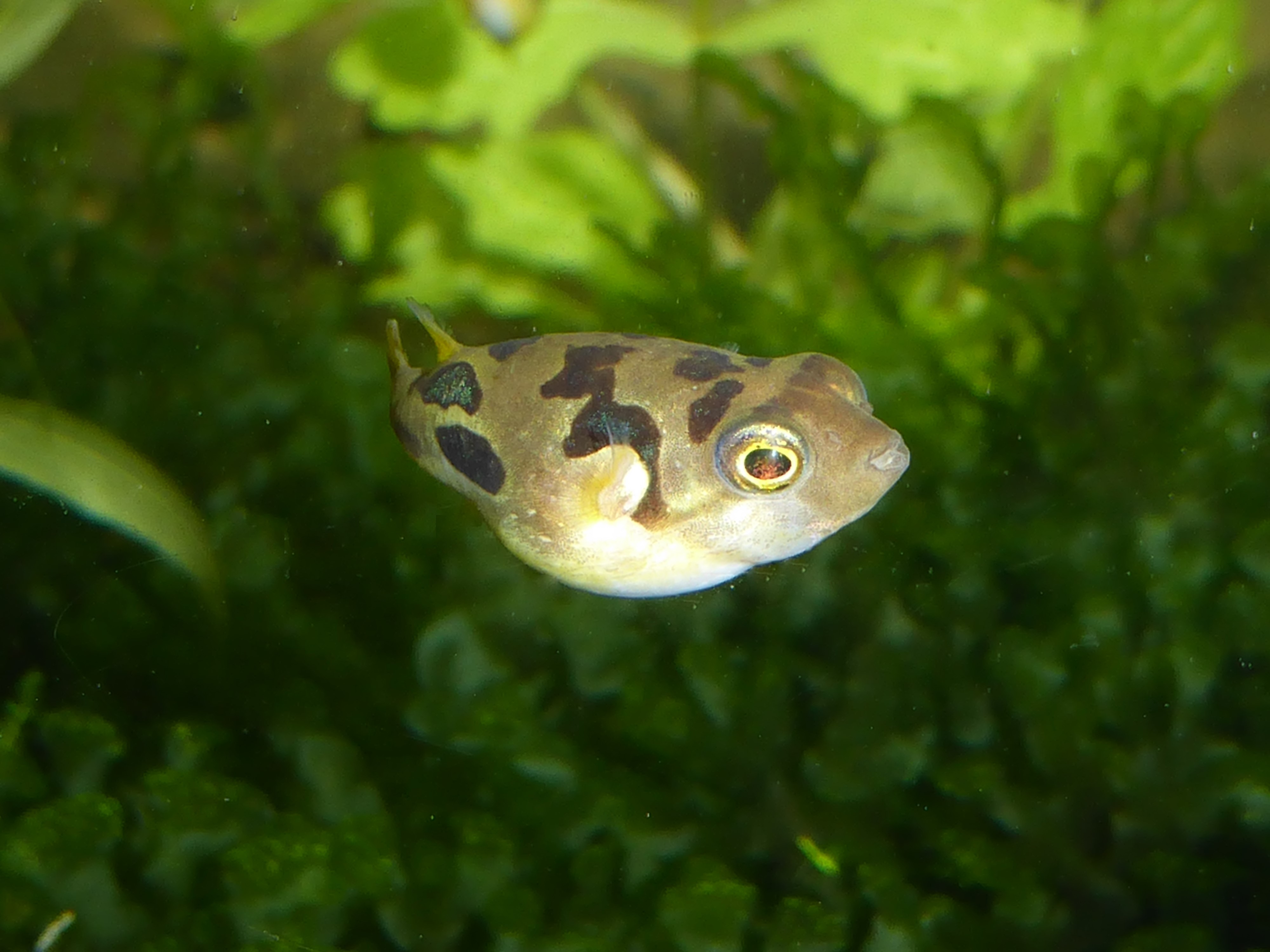 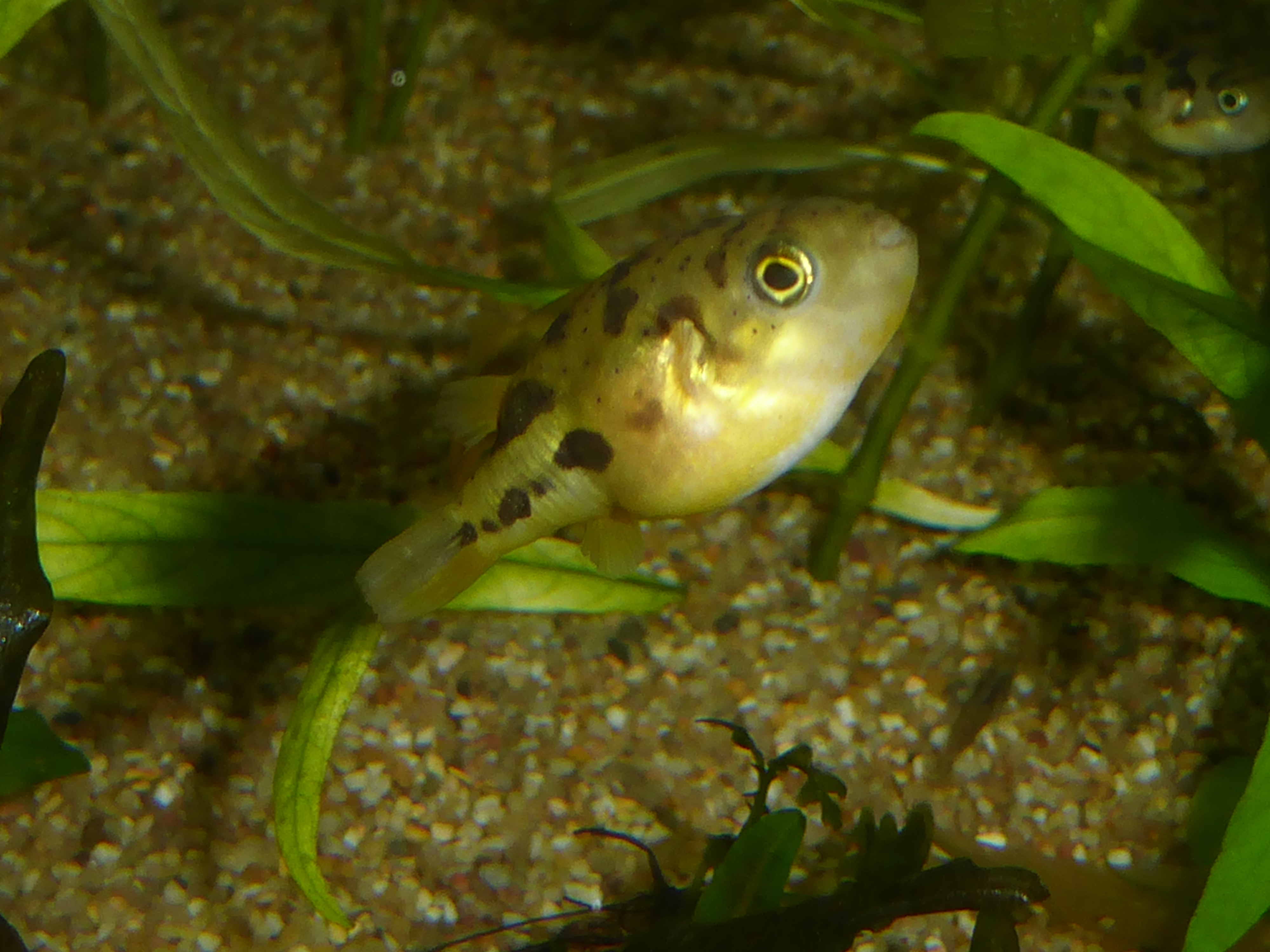 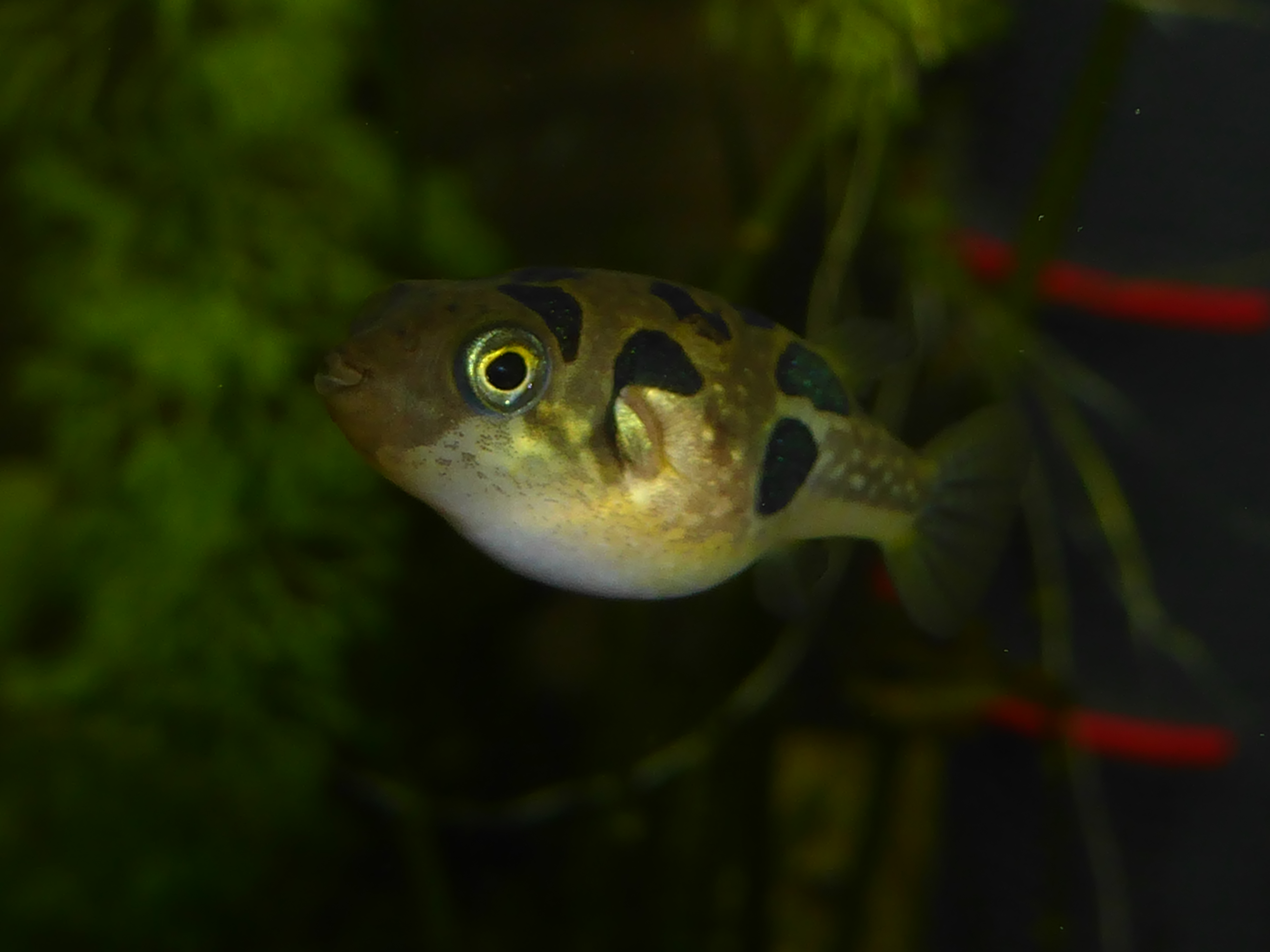 Few shots of mine

MirandaB said:
General rule of thumb is minimum 60lt tank,10lts per fish although personally I think 6 in a 60lt would be pushing it but depends how well they get on.
Currently I have 10 in a 120lt (2m/8f) which once they go into the 180lt I will increase to 15 or so I think....some of them are over an inch snout to tail so not as tiny as some people like to think.
As with all fish that are settled in a tank you see less of the shoaling behaviour until it come to water change time

I've learnt a few lessions with these fish, firstly they're not easy fish - anyone pushing these on youtube as "easy" needs a telling off. For teeny fish they move a lot faster than you'd think, 2 ft in less than a second with ease. Their personalities vary, one fish I have is an absolute nightmare - she will go beserk whenever I enter the room, another, a chilled bean. They required a constant source of varied live food, snails and blood worms aren't really enough, and they do like smaller foods, a risky net in a pond sorts that out though. Puffers jump, so cover the corners. They're messy, as in the food waste and toilet waste is high, but high filtration is a recipe for unhappy fish. They also eat their young, which is my new favourite gripe haha. Some of them are shrimp safe, but if they see one of fish eat a shrimp, no shrimp are puffer safe.

No they're not as easy as a lot of people make out and the trouble is they're cute so appeal rather too much to those with little experience.
Yes they eat their young unfortunately and I have one little lady who spends most of the day lurking in the moss to eat any eggs laid

I find the easiest way to breed them is to pop a male and a couple of females in a separate tank for a week or so then remove them but I know that's not always an option.
As to shrimp I had the great idea of using surplus wild type Cherry shrimp as a food source but it appears shrimp are friends not food although they'll devour Mysis shrimp.

I'm used to puffers but marine puffers and the care of a 20" mappa puffer who can eat whole clams and mussels is a bit different to dwarfs. Luckily I only had to babysit it for 6 months but it started my fondness for puffers, especially the smaller toby puffers but not kept any (did sell dwarfs in the shop but only in small numbers, so no real experience) freshwater at home. I find them fascinating and I'll probably give them a go one day so thankyou both for the great hands on knowledge. 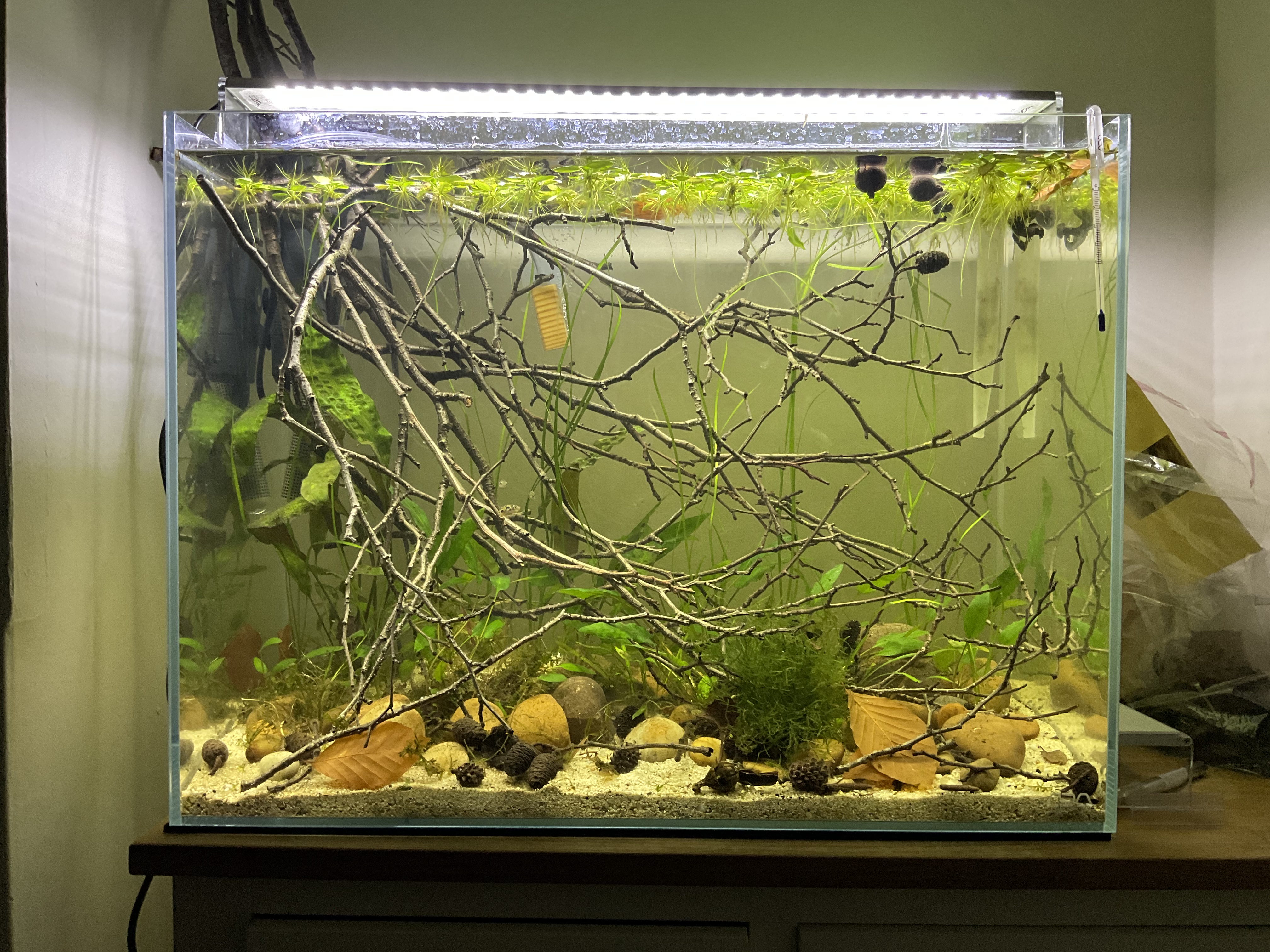 A little messy, but added the vallis nana from @oatfish, I think it is going to grow in very well. Just waiting for the nymphaea to push a bit harder and I’ll be quite happy.
I’m preferring this tank to the previous, that’s for sure.

I love that! Which Nymphaea have you got in there?

MirandaB said:
I love that! Which Nymphaea have you got in there?
Click to expand...

Stellata, well at least that’s what it was sold to me as. Difficult to see, but as the substrate doesnt get much deeper than 1inch, I cut the bottom of a plastic bottle at about 2.5iniches, put a few holes in the bottom and the lily got planted in there. Somewhat hidden in the stones and moss. Difficult to see straight on, but at angle you can see the plastic. 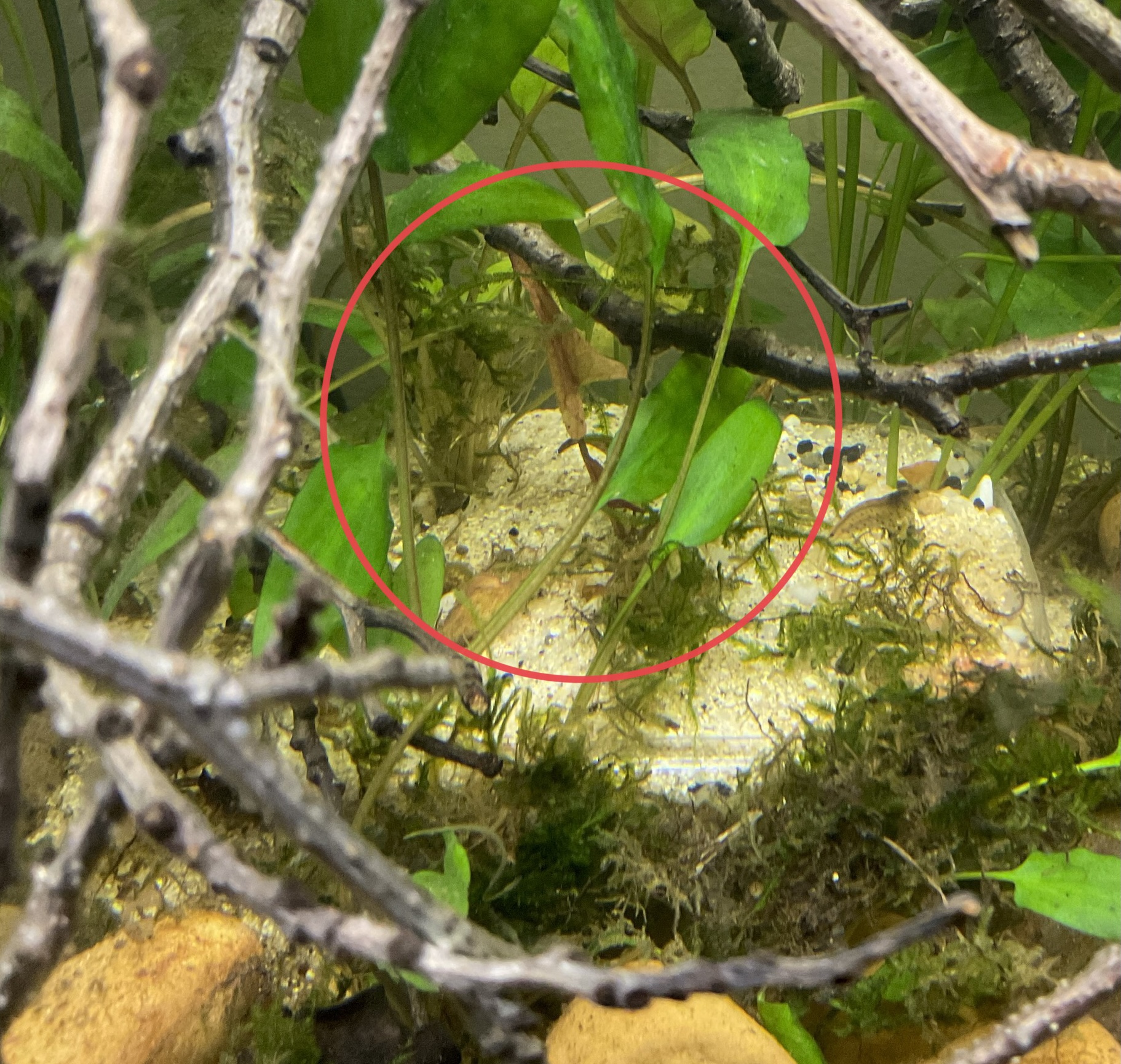 Looks like stellata to me from the leaf shape...good idea with the bottle,I might just be pinching that in the future

Hard to believe this tank is 8 days old - since flooding. 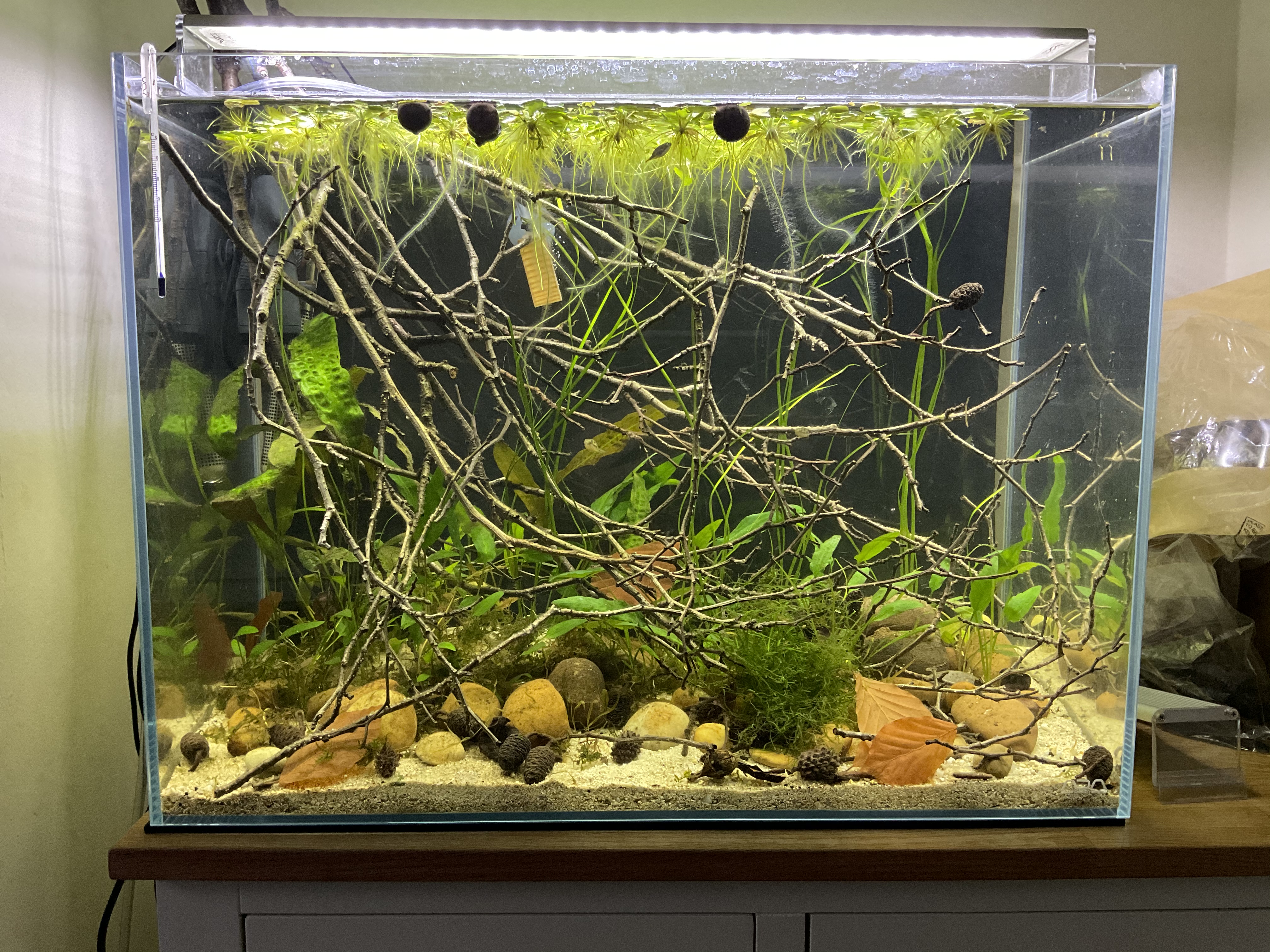 Just running an eheim skim, and an air stone. still waiting for those brown balls to get water logged, and the floaters have certainly taken hold.

No breeding action yet, but the dynamic has really shifted.

Snail jar is still going, but I am soon to empty all this water into the puffer tank as it’s filled with lil insects.

An Anubis has broken free, so I need to attach that too. I wouldn’t say this is thriving, though moss looks alright, more slowly slowly living. 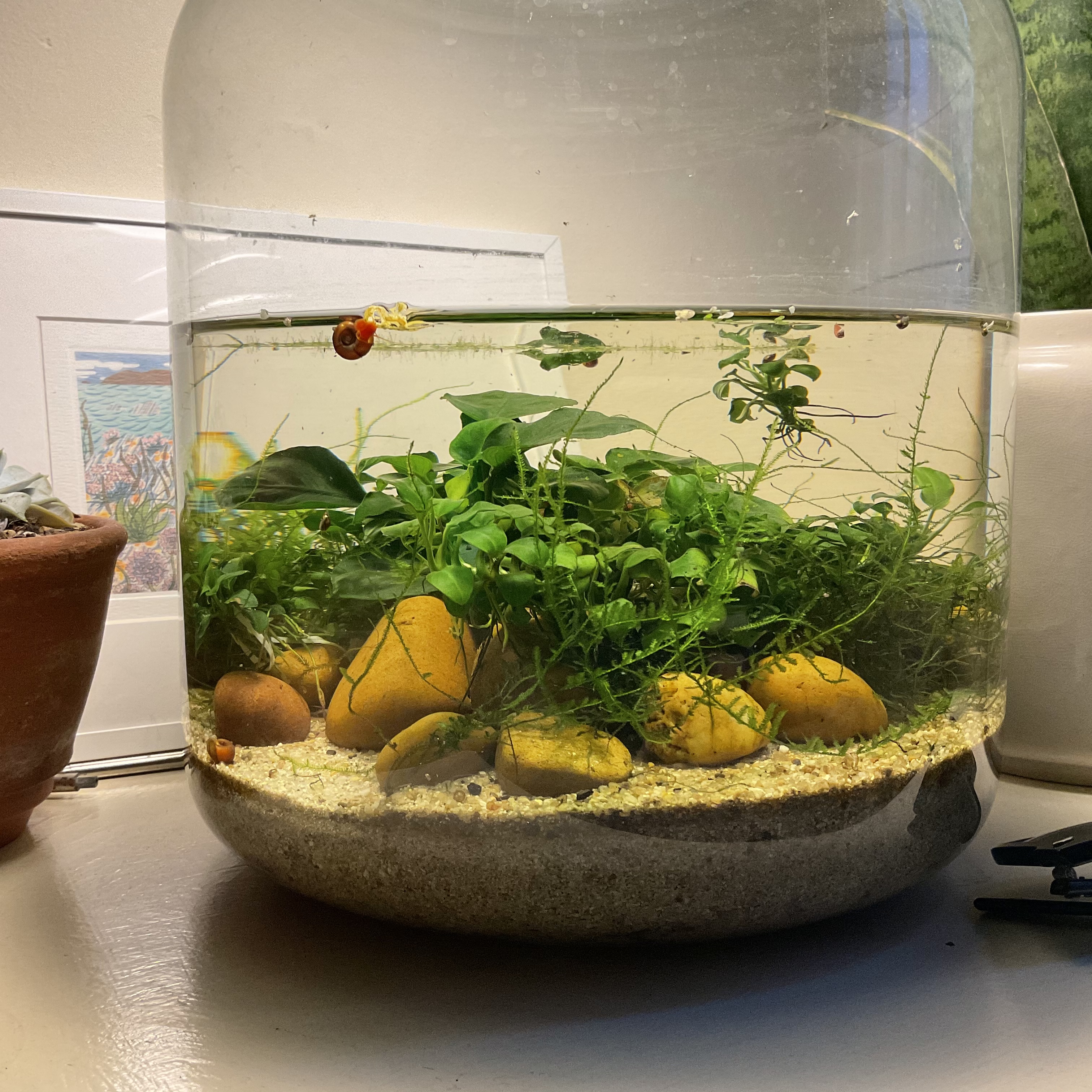 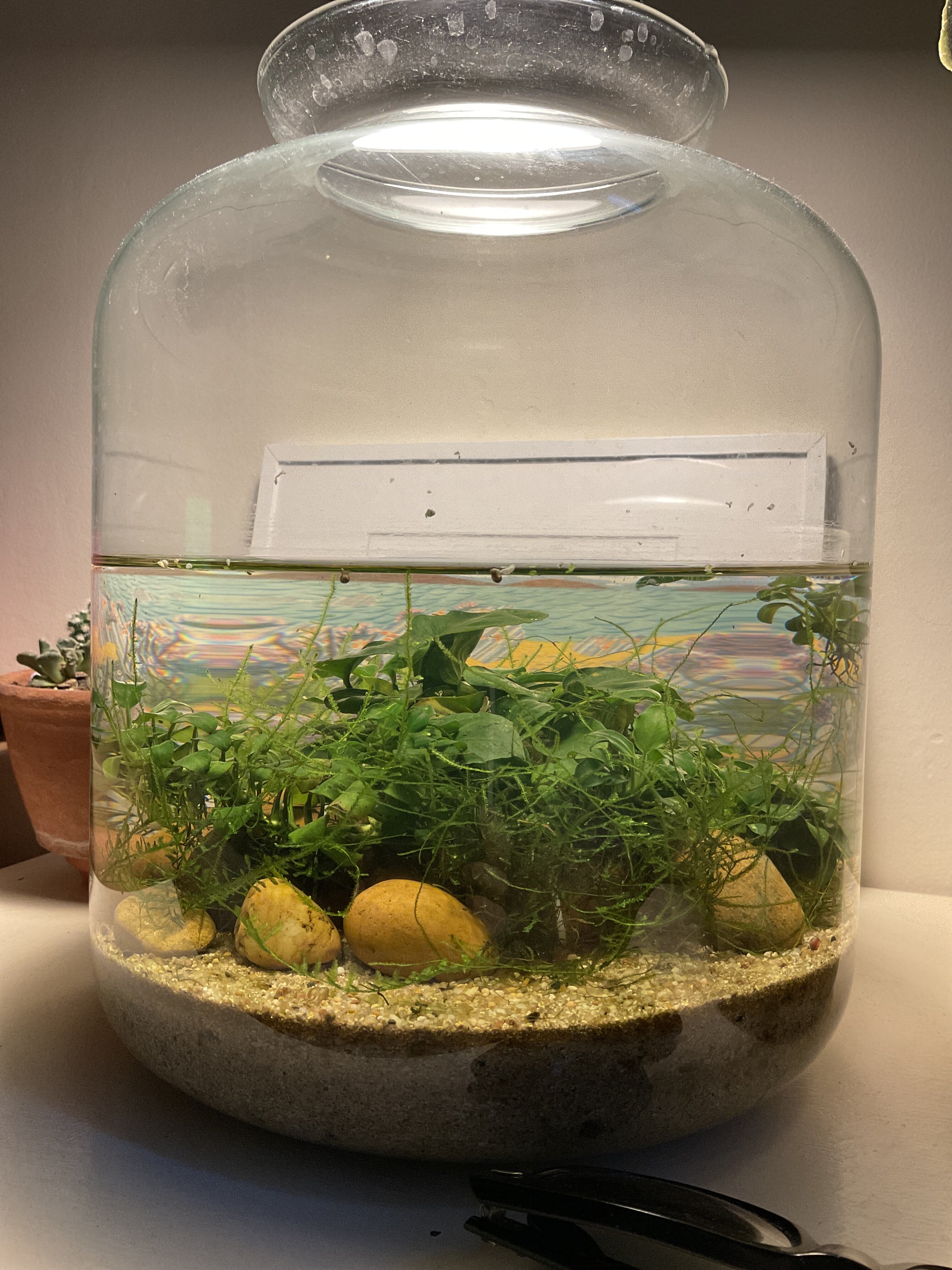 this is my view from the sofa, my heads about 1.5ft away.

Algae is rife, but fairly certain this is mainly filamentous diatoms. Everything is growing, and I’ve got a lot more colour in the floaters after doubling my dosing.
Sun is now hitting the side of the tank, so some algae on glass too.

Algae isn’t as bad as it has been, daily 20l water changes and a toothbrush gets most of it. However the algae in the moss is a little harder to remove. Its proven to be a good spawning spot though. I suspect in a week, this will be much better looking.

As for fish, they’re fine. Been meaning to buy some more moss, will add that to my list. Proving to be more hungry these days, so getting fed twice a day.

A note on the wood; it’s tricky to clean. And in a few months it will be very fragile. Also because of how I’ve placed them, accessing glass isn’t easy. I will be snapping some branches.

I added the Eheim Liberty just as an extra filter after WC, does a good job removing some of the crap in the water.

Plants are doing alright, the original Vallis died back but new leaves are coming, and a runner has also appeared. The lily has reached the surface with two leaves, and another is 1inch from exposure. The Cryptocoryne Green Gecko is looking lovely.

I’ll do another WC in a bit, and i’ll try and capture on macro some puffer eggs.

This isn’t a great photo, will take another later in the week with the proper camera. 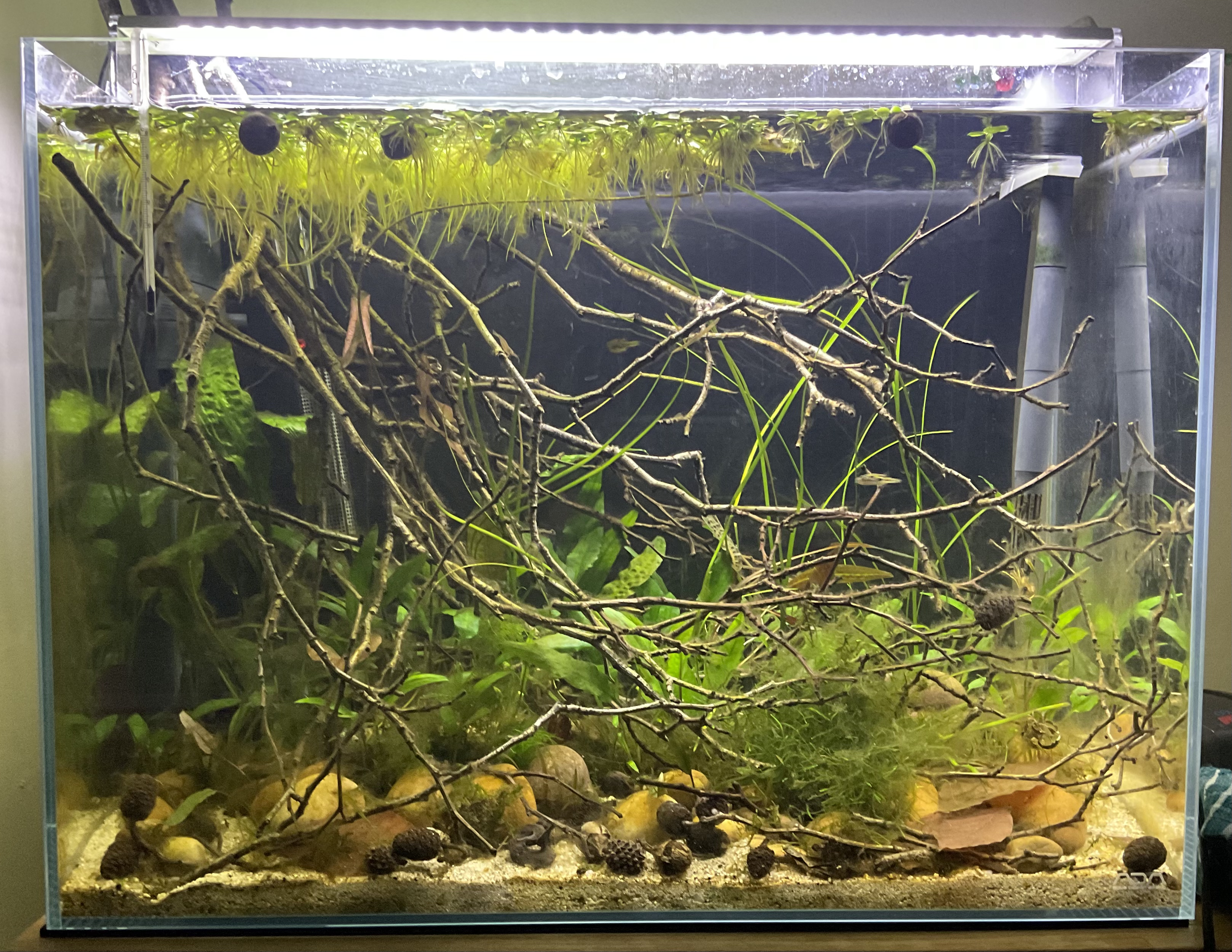 I also thought they might enjoy some of my reject shrimp but it appears freshwater shrimp are friends not food...oddly they will enthusiastically eat Mysis shrimp

I often see them give a hunting chase towards a shrimp, then lose interest as soon as they get close enough to see that the chosen shrimp is bigger than they first thought.

Hey @MirandaB what do you treat your puffers with for internal parasites?

castle said:
Hey @MirandaB what do you treat your puffers with for internal parasites?
Click to expand...

@castle Esha NDX is my preferred med for worming