Hello all, here's an update to my weekend project. Finished planting over the weekend and planning on running this dry start for 4+ weeks. Fully sealed in cling wrap and getting 12 hrs of light per day. Opening twice a day to mist with water and occasional ferts and wabi kusa mist. I also siphon water down with an airline tube if it ever gets close to the plant line in the front. All plants are tissue culture save the fern and moss. Substrate is a base layer of ADA Power Sand Advance capped in Fluval Stratum. Capped with Stoney River black sand at the front for the smaller carpeting plants (HC Cuba). Used the yogurt method to apply moss to the hardscape. So far so good. Only concern is the success of running a dry start with so many stem plants, and tissue cultures at that. Anyone have experience with that? Because tissue culture plants are essentially grown immersed, I'm hoping they'll be just find and send down roots. All of them came in great shape except for the Rotala Macranda, which showed signs of wilting upon purchase. Thankfully it hasn't gotten worse over the week so there's hope. I'll be running CO2 on this setup after flooding.

Plants in soil from front to back:

Let me know what you think, if you have any tips, and what YOU would stock this with when its flooded.

Towards the end of the second week of dry start I noticed some mold creeping on the corner of the H.C. I removed affected plants and re-filled the area with freshly separated ones but to no avail - so I decided to flood and blast CO2. While I could see some small green tips beginning on the blended riccardia, I knew the flooding was done too early. As expected, the H.C threw a fit and began to melt, along with some of the larger leaves of the S. Repens and Rotala Bonsai. I wasn't so worried about the stem plants as they tend to be quite robust even in low tech setups.

After a week of daily water changes the dense planting of Rotala in the back had grown in so dense that I decided to uproot and trim. My thinking was that not all of the original tissue culture plantings actually made it to the top and those trapped at the bottom would rot and damage the healthy growth. I ended up doing the same for the S. Repens and Bonsai, which were showing signs of melting as well, towards the bottoms of their stems. The tops all had healthy growth, so I felt encouraged. These photos were taken a few days before that terrible mistake.

By week two I face the consequences of too much meddling and not enough patience. It seems the the plants had used the two week dry start period to establish roots and would have adjusted fine if I let them be. Instead, they've all but melted. Additionally, the Bucephalandra is almost entirely melted despite my never touching it. I am still holding on to hope that their rhizomes will bear new submerged growth. The Rotala H'ra and Macranda in the back is still doing fine but there's not much hope for the S. Repens or Bonsai. As for the riccardia, there are still traces to be found in cracks of rock, so I can only hope that I'll see growth after another month or so. The bolbitis has acted relatively indifferently, as is to be expected with slow-growing ferns. I've removed a handful of dying leaves but nothing worrying.

So, two weeks after flooding and no signs of algae, which is encouraging. Running an Eheim classic 150 external with 3 layers of filter sponge before a 60% volume of Seachem matrix.

What are your thoughts? I certainly flooded too early but thought I could get away with frequent water changes and enough CO2. Did I trim things too early? Another question is about CO2 distribution. I wasn't happy with the way it was flowing in this current photo so I ended up moving the intake pipe to the right side by the heater. The CO2 diffuser is right underneath the spin pipe and the bubble stream gets split in half. This has resulted in a bit more of a pull along the front side of the tank while half of the bubbles are blasted towards the back. Anyone with spin-pipe experience using a different method for distribution? Lastly, I am planning on doing another plant order to re-fill what I've lost. I'll remove all of the dead stems, vacuum the soil, and try again. Same plants, same placement. Hopefully the soil will have leeched any remaining toxins by then as well.

Appreciate it. I can’t say; never used a spin pipe before but thought this size seemed adequate for the 5 gallon. Larger spin pipes come with a bigger diameter, which seems unwieldy. What were you thinking instead?
D

Realizing I haven't kept up with this at all. As a final note for this scape I will say it was a success and was able to give a presentation to my college of architecture on the process. Here are some final photographs before it was torn down for my move: 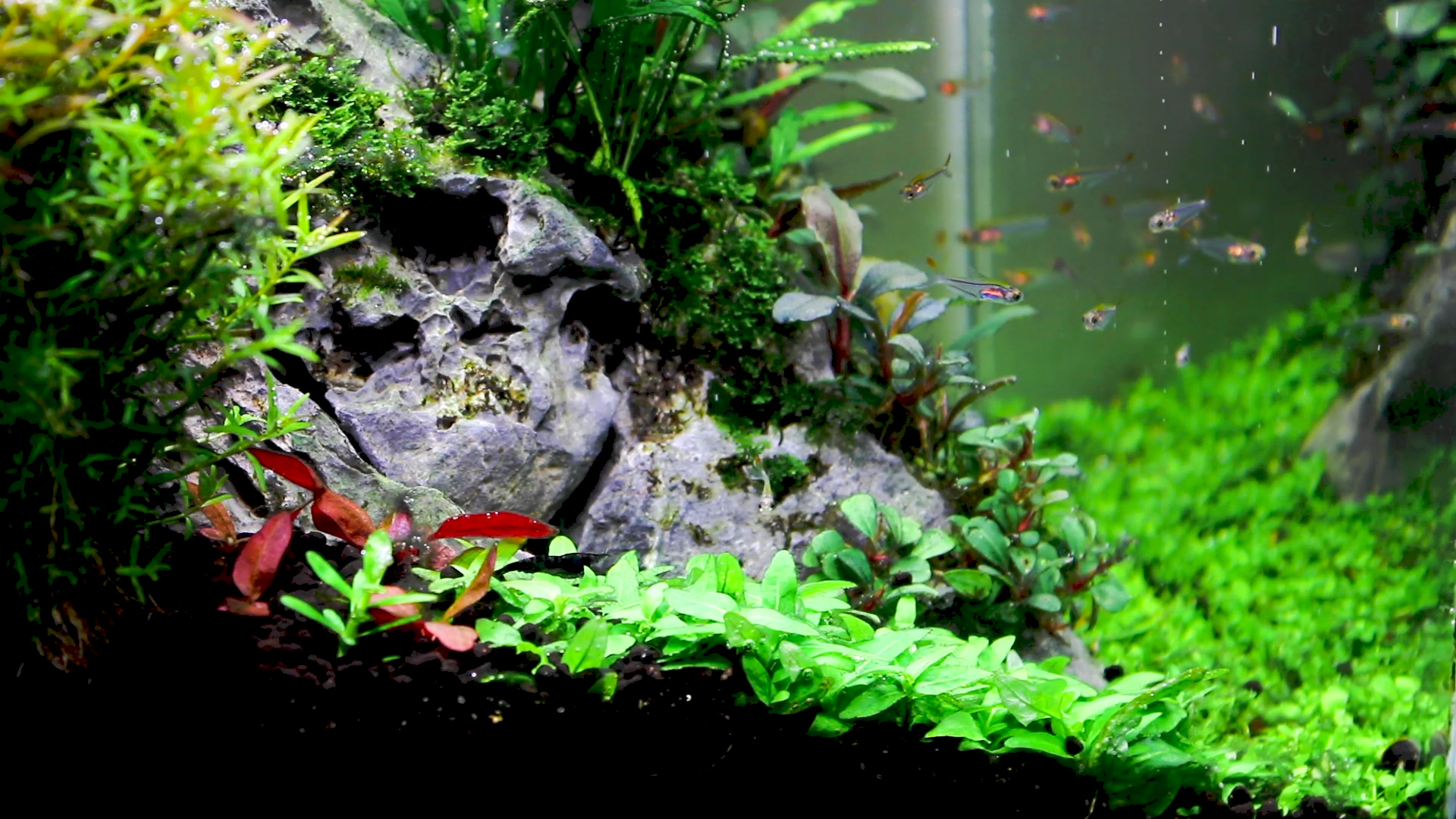 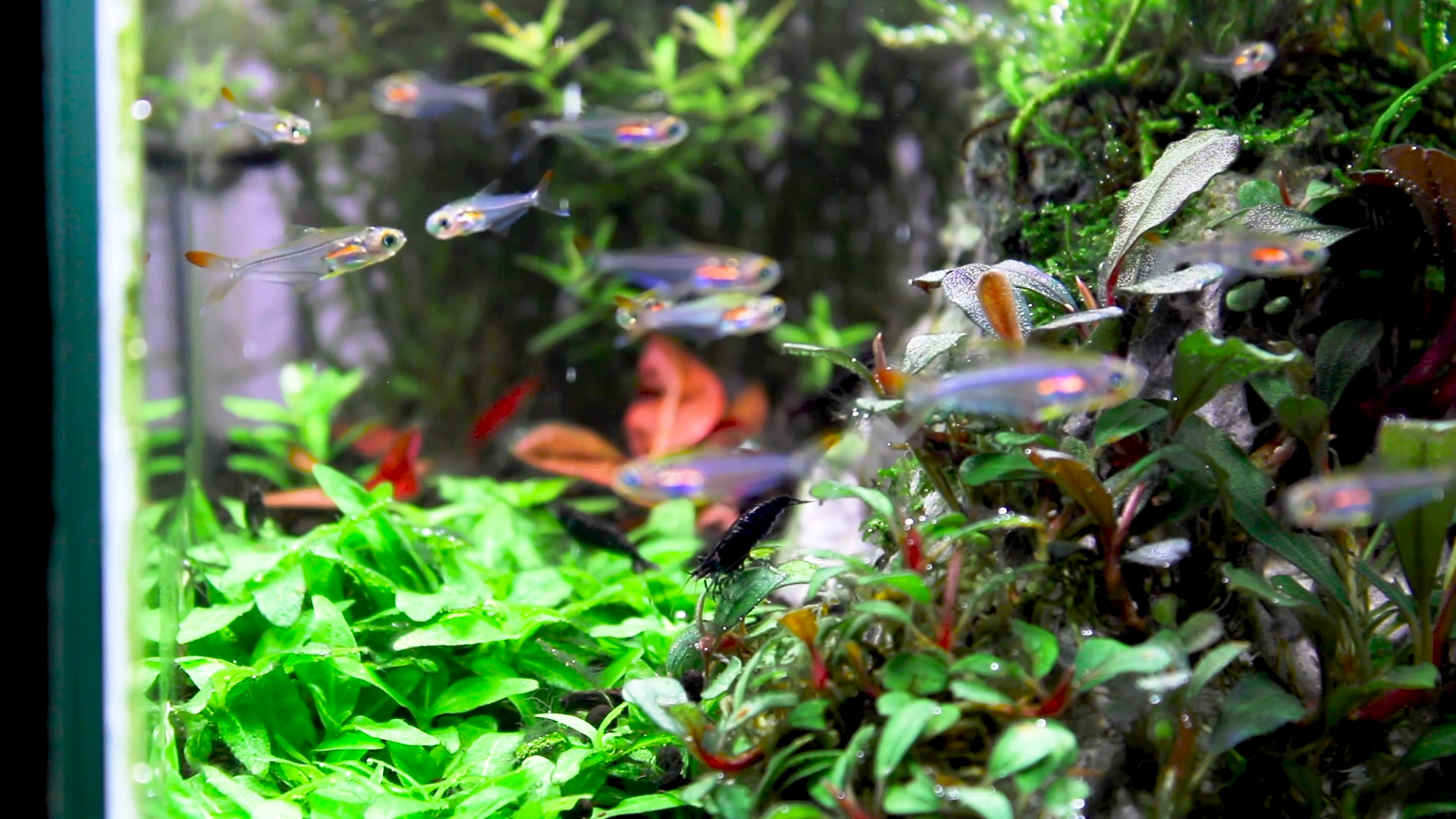 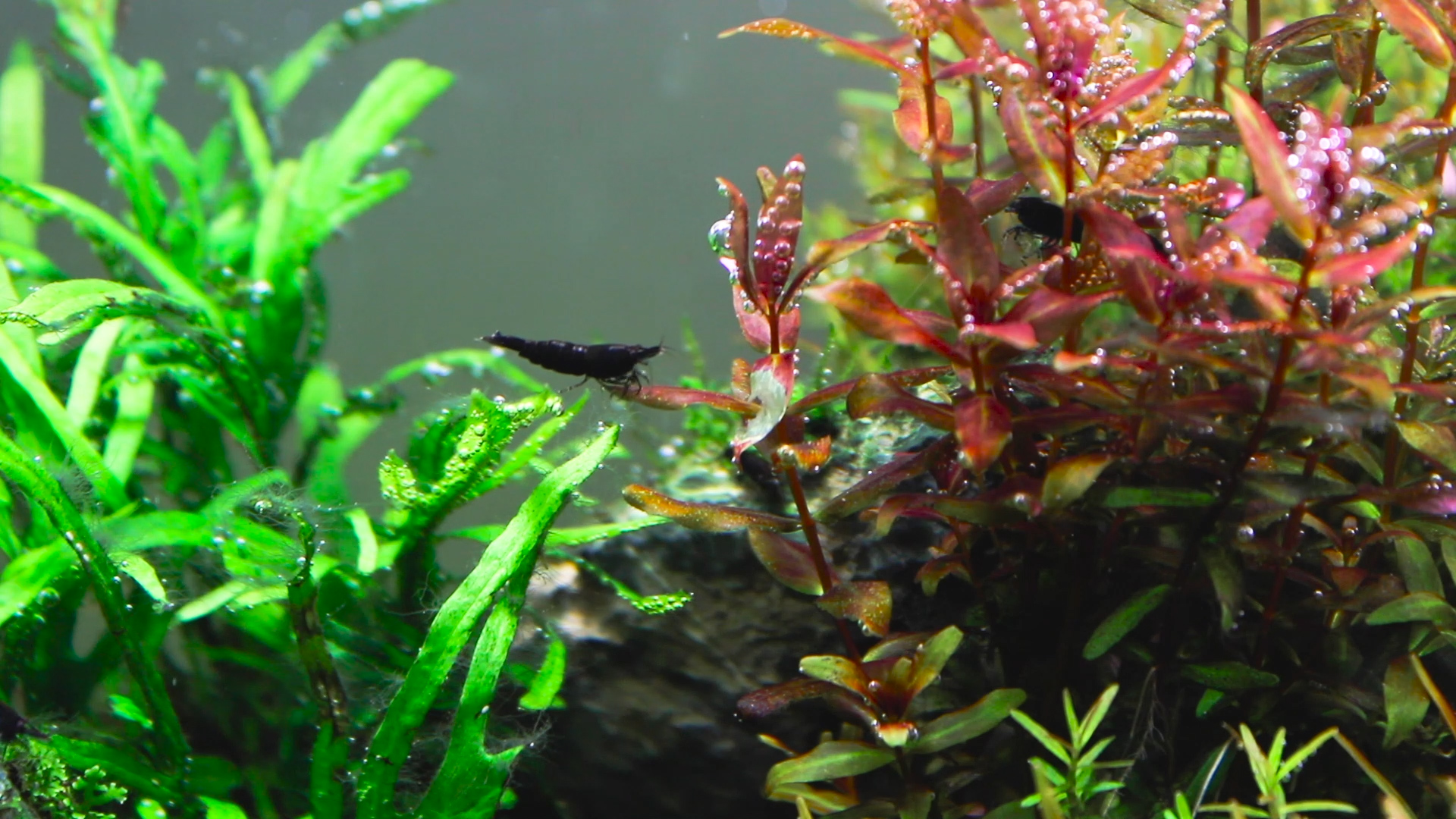 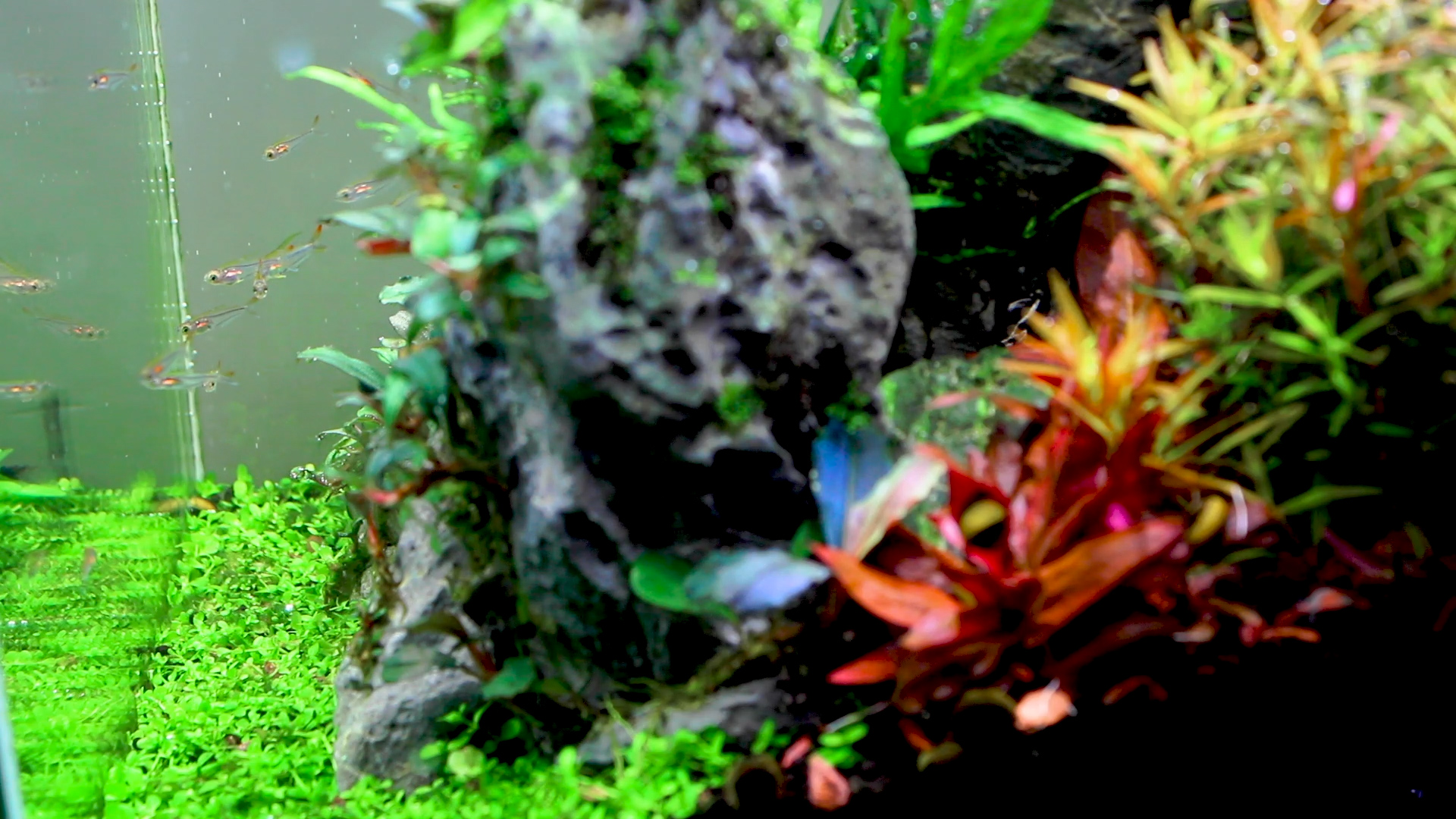 Lovely, What fish were they. I don't recognise them
Meander, Counted Sorrows
Experimentation is the key to growth - Pardeep
D

Lastly, for those interested, here's a link to the presentation I gave on this to my college of architecture here in Chicago. It's a bit more broad as my audience were outsiders but you may enjoy the overview / discussion prompt.
D

Gill said:
Lovely, What fish were they. I don't recognise them
Click to expand...

Those are hummingbird tetras, trochilocharax ornatus. Truly a pleasure to work with and ran into no difficulties with them.

dallen98 said:
Those are hummingbird tetras, trochilocharax ornatus. Truly a pleasure to work with and ran into no difficulties with them.
Click to expand...

Thanks, have added to my fish wishlist
Meander, Counted Sorrows
Experimentation is the key to growth - Pardeep

The colours are those little fish are amazing - not a fish I've ever come across, I love Nano sized fish, and these top out at 17mm according to Seriously Fish. There's a great little video of them here:

Is that iridescent colouration typical @dallen98, or have they over-egged it for the video?
D

Wookii said:
Is that iridescent colouration typical, or have they over-egged it for the video?
Click to expand...

They are quite beautiful but certainly that video is a touch oversaturated form my experience. I will say, depending on the time of day, light reflects off of their bodies in different ways and they do have a broad range of colors because of that.

Gill said:
Thanks, have added to my fish wishlist
Click to expand...

@Gill - if you ever find a decent UK source for these, please let me know 👍🏻
You must log in or register to reply here.
Similar threads