10 years in the making

So, this is my latest aquascape and one that has taken 10 years to get to!

On my recent 10 year work anniversary, my company gave me £500 to spend on anything I like, so I took the opportunity to indulge my hobby a little. I spent £300 on the two Kessil A80 Tuna Sun LED lights, ADA substrate and a decent selection of plants. The tank has been running for around three weeks now and all is going well. I thought I'd just begin a journal to show how the scape is evolving.

These photos are just taken with an iPhone - apologies for the quality. I hope they are clear enough to show what is going on. 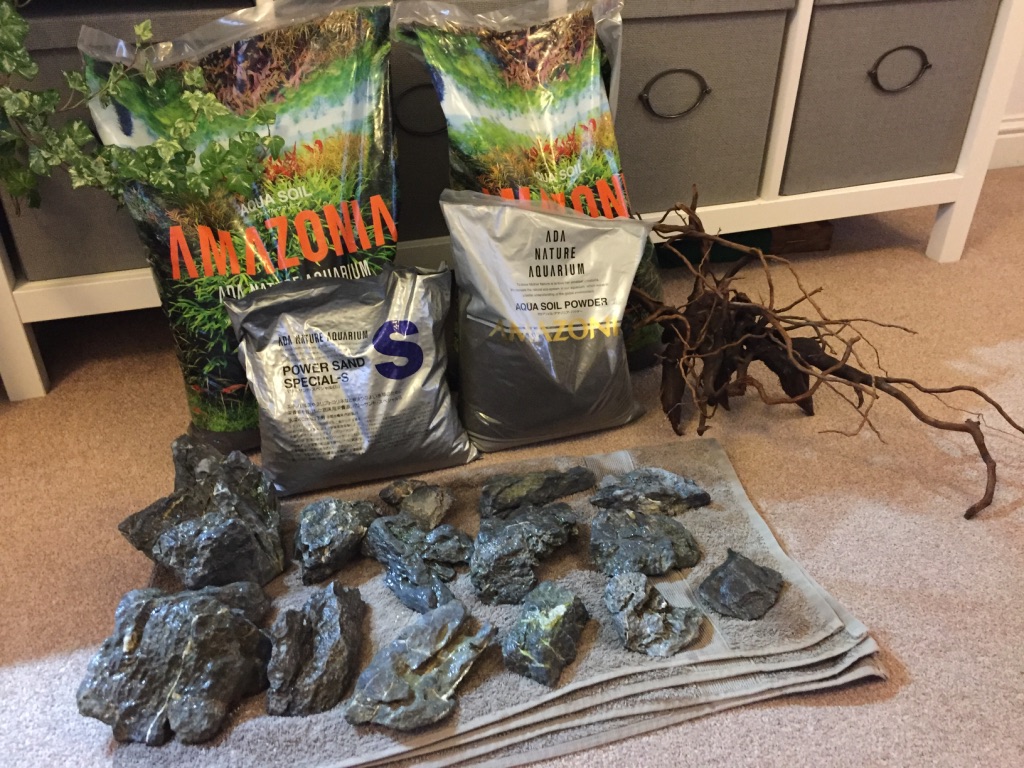 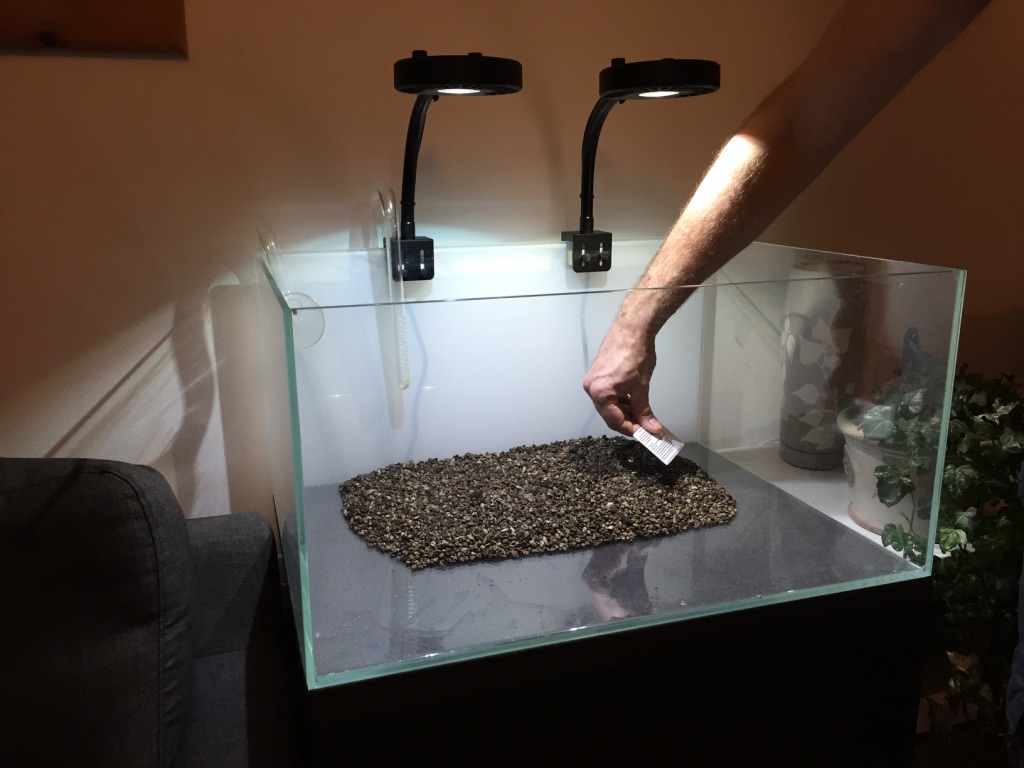 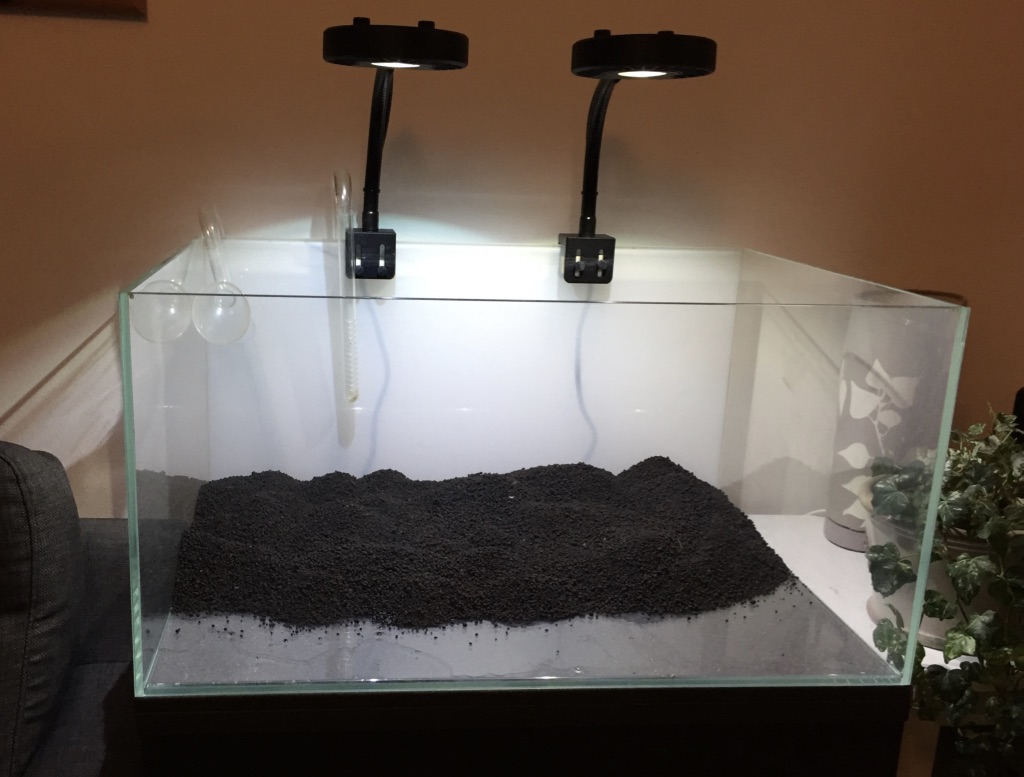 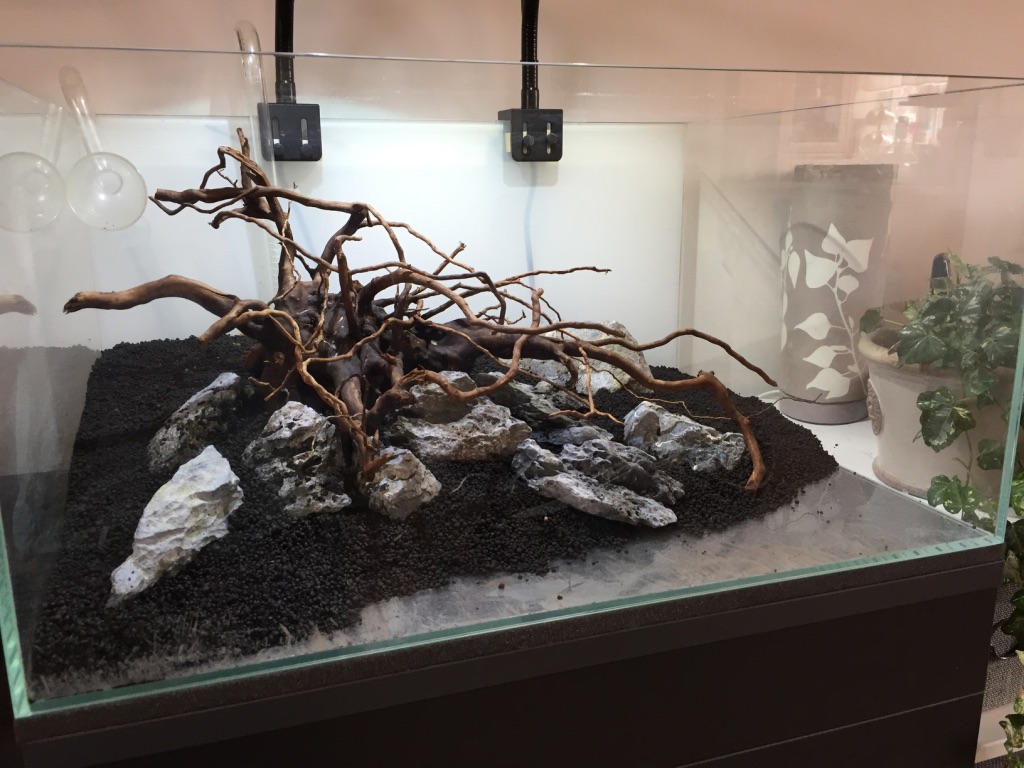 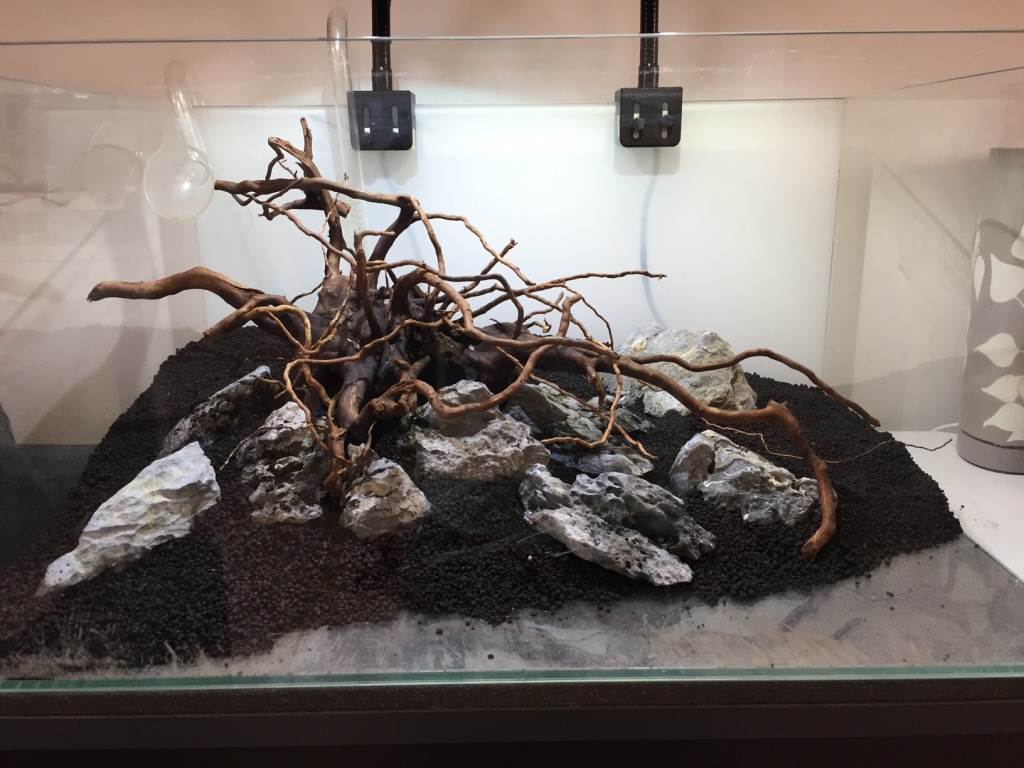 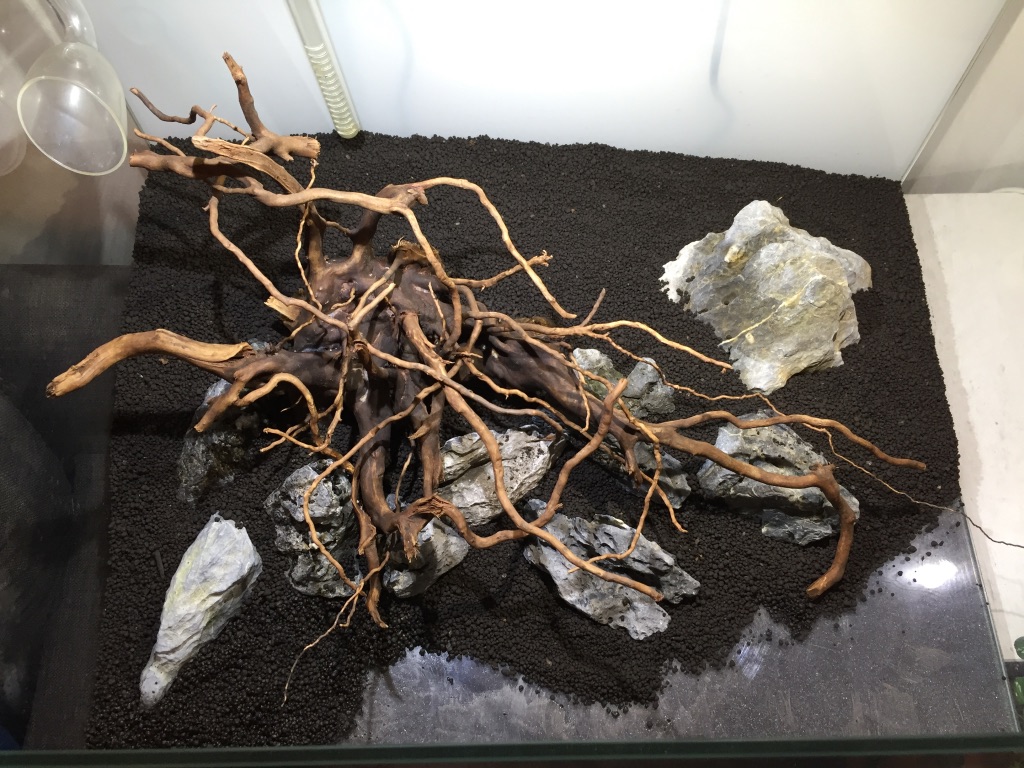 I want an almost industrial contrast between the lush green of the plants and the hardscape, so opted for a foreground of Dennerle Baikal substrate (from AquaEssentials)... (bear with me on this one!). Our lounge is predominantly grey and white with the odd house plant here and there. This scape is designed to complement that. 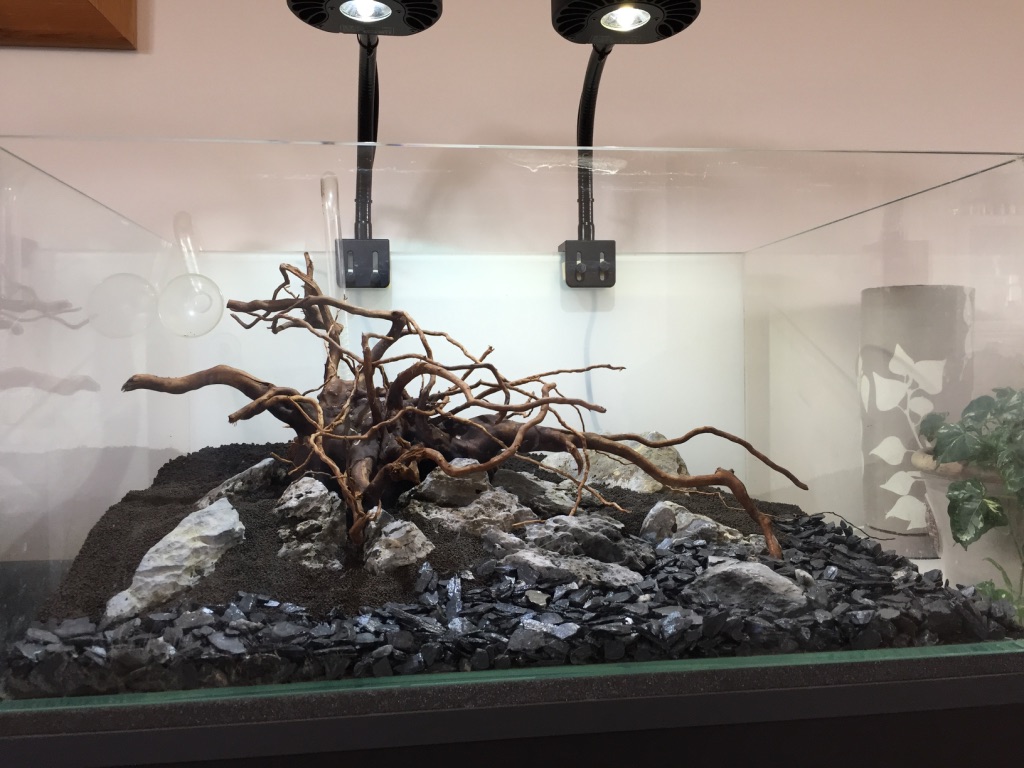 Just before adding water, I added a layer of ADA Amazonia Powder to the parts I would be planting HC into - the first time I have used it - highly recommended for HC and hair grass. Made planting a doddle.

The tank was then cycled, without lights for two weeks before planting as recommended by ADA to avoid an ammonia spike. The filter media is mature, from a previous scape, so the two things combined should help in the initial few weeks of the new tank.

TWO WEEKS LATER - 25th March 2017
These are taken immediately after planting, so the water is still a little cloudy. 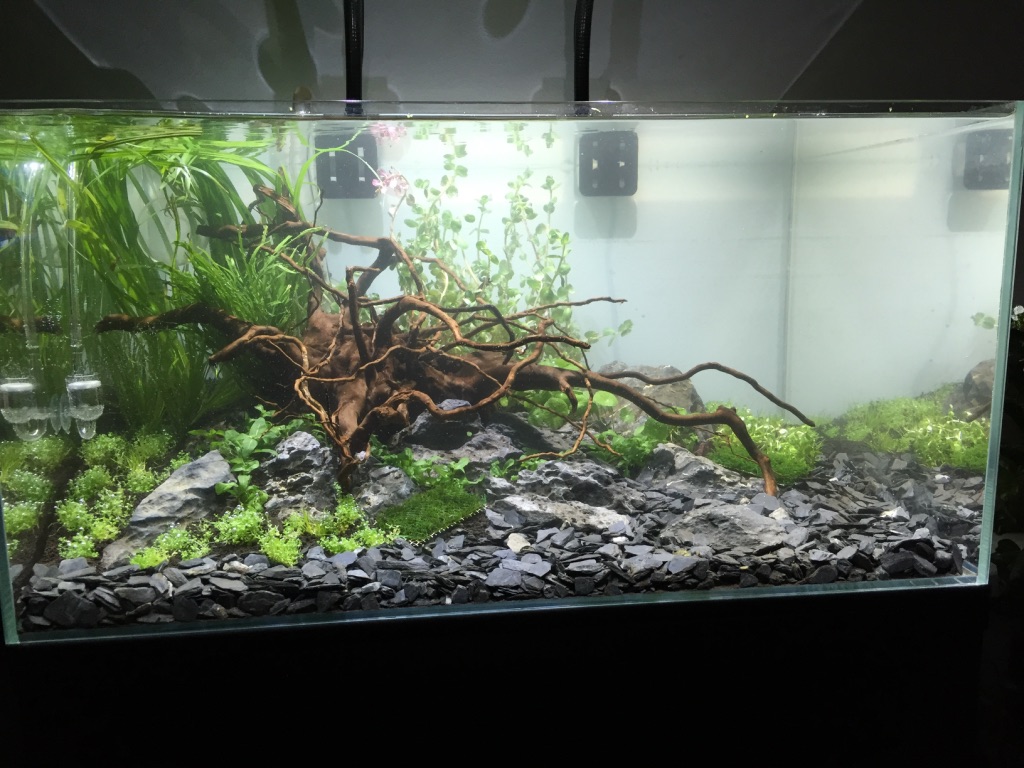 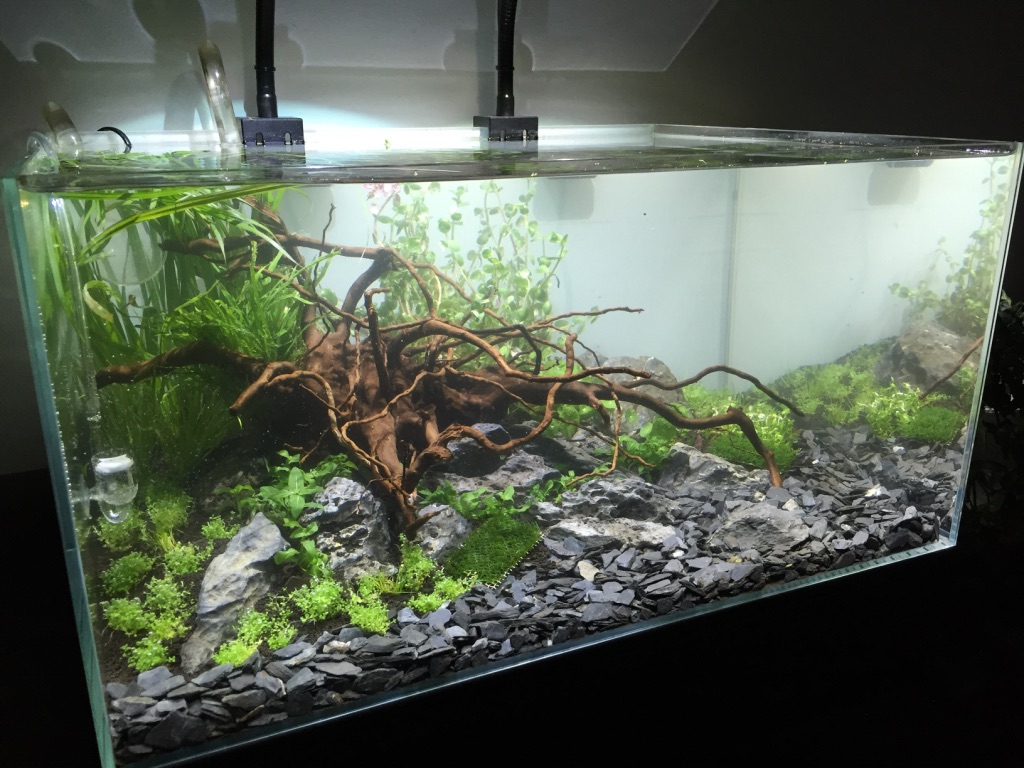 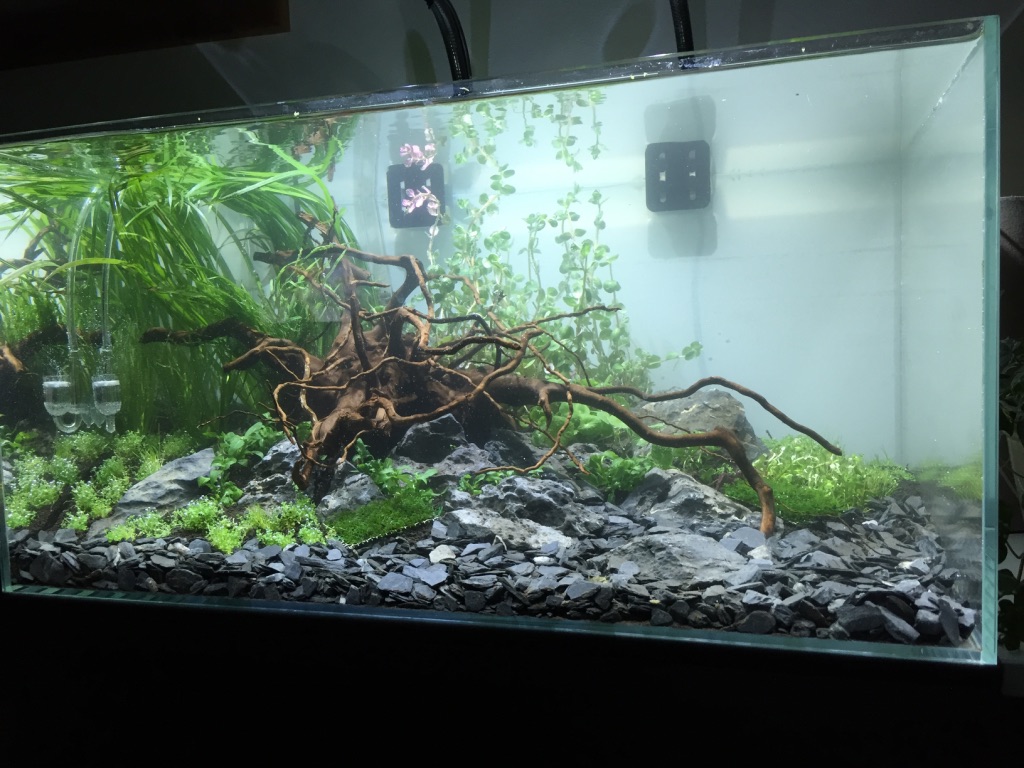 Since these photos were taken, I have added a number of small Anubias plants and Fissidens fontanus to the wood. Pics to follow.

The idea is the the foreground becomes a lush green carpet of the HC and hair grass, the Staurogyne fills the spaces between the wood and the rocks and the background becomes a contrast of red Rotala and the green of the Cyperus heiferi. These incidentally, move beautifully in the outflow.

Livestock:
I have a group of 25 or so Cardinals from my previous tank and a couple of Otos which I will add after the HC has had time to take root. I will add some Amano shrimp in a couple of weeks't time, only because I cannot get to the fish shop before then. I fancy owning cherry reds again as well - they should contrast the greens and greys of the tank nicely.
Last edited: 16 Apr 2017

CO2 - a far better option than SodaStream
For years I only had SodaStream CO2 and this was costing me a small fortune. Having stripped my tank down in preparation for this rebuild, I took the time to investigate other options and happened upon this company and this CO2 in particular - adamsgas. I located a dealer nearby and fitted it to my single stage reg (originally from CO2 Supermarket when I bought the SodaStream adapter). The 3.15kg tank fits perfectly under my tank in the TMC cabinet.

I highly recommend this to anyone currently struggling with SodaStream - i found they lasted about a month (£9 a pop) and often leaked. I also lost several when trying to fix to the adapter, which was galling watching the CO2 simply spurt out across the lounge This also, strangely, feels safer as you seem to have more control over the gas, with a great tap on top, which you can open at arm's length

Can we get an update on how this turned out

@Ben C I use a 5KG fire extinguisher...lasts me nearly a year and is about £35 a pop inc delivery from ebay

Ben C said:
CO2 - a far better option than SodaStream
happened upon this company and this CO2 in particular - adamsgas. I located a dealer nearby
Click to expand...

I use the same company for my 6KG CO2 tank. Very impressed with service and price from local supplier. Was using 2.5 fire extinguisher from Amazon but this is far better value and as you say the tap allows for full control. Where as the fire extinguisher is either 100% open or closed.

looks like a great scape developing.
You must log in or register to reply here.
Similar threads